Pan-Fried Orange Fish with a Fennel and Potato Bake

This recipe is deceptively simple, yet elegant. The potato and fennel bake requires a lot of time in the oven to get thoroughly cooked and nice and brown on the edges. The fish that you use in this recipe should be small, since the cooking time in the pan is really short. Here I have used small cod fish, but you can also use red mullet. At the last half an hour of the baking of the vegetable dish, you can start preparing the fish. Serve with crisp Clare Wine Co Riesling. 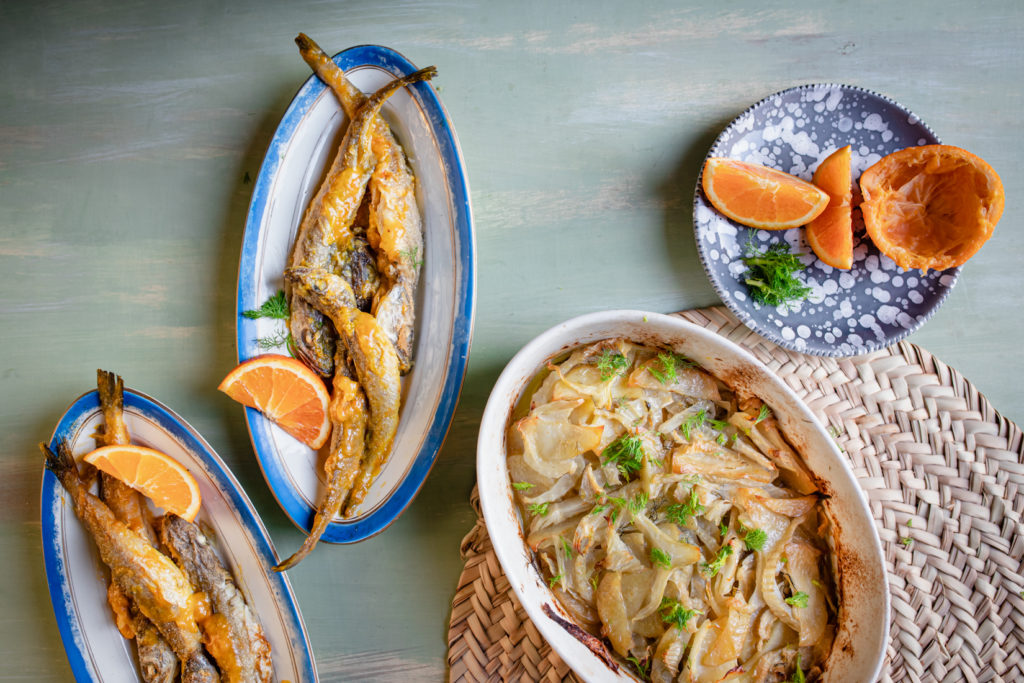 6 – 8 small fish such as cod (or less, if the fish is larger), gutted and scaled

1 large fennel bulb, with some fronds on

Zest and juice of one large orange

1 teaspoon salt (or more to taste)

For the Fennel and Potato Bake

Heat the oven to 300°F. Clean and trim the fennel, keep some of the fronds for later. Slice the fennel crosswise thinly. Peel the potato and slice the same way. Toss all in a baking tray large enough just to contain all vegetables, not too large. Add 4 tablespoons of olive oil, half of the salt and all the orange zest. Mix everything very well using your hands.

Cover with tin foil and bake for one hour. Remove the tin foil, and bake for another hour or until the edges of the vegetables are golden.

Wash the fish and remove anything that might be left after gutting (your fishmonger can do that). Pat the fish dry. In a dish, mix the flour with some salt and pepper.

In a pan, heat the rest of the olive oil with the butter on high heat. Flour the fish and shake off the excess; add the fish immediately to the hot pan. After a minute, carefully turn the fish to cook the other side, and after a minute add the fresh orange juice. Cook for three to five more minutes until the sauce is a bit reduced. Serve immediately with the fennel potato bake on the side.