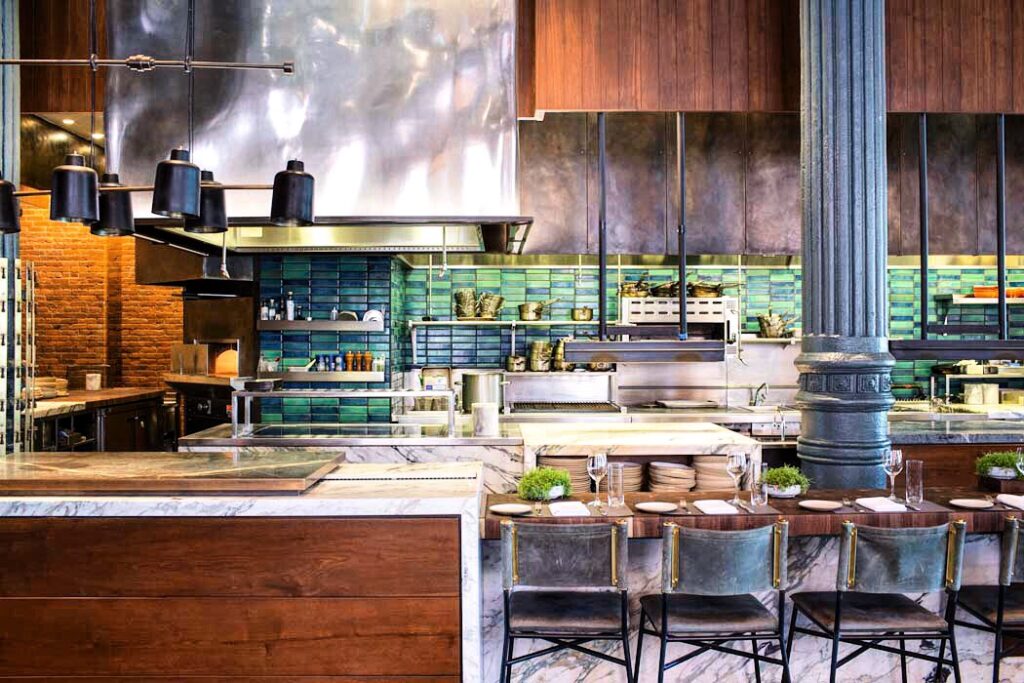 Every spring, the entire food industry looks to Food & Wine to crown the year’s “Best New Chefs,” the quintessential list of who’s restaurants we will frequent for the next decade or so. It’s no secret that the chefs picked by the magazine’s editors go on to illustrious careers; past winners include Thomas Keller (’88), Tom Colicchio (’91), Tim Cushman (’08), Missy Robbins (’10), and Rich Torrisi & Mario Carbone (’12). And yet, beyond the magazine and the annual Food & Wine Aspen Classic, Food & Wine had no regular forum for showcasing the talent they were discovering, no way to allow their fans to taste these chef’s dishes and no way to interact with the chefs. That is, until they created Chefs Club.

The original Chefs Club opened in the St. Regis Aspen Resort during the summer of 2012, helmed by chef Didier Elena. The winning premise is this: a full restaurant with a menu featuring limited-edition dishes as well as regular “kitchen takeovers” and intimate ticketed dinners from the world’s best chefs. After getting two years under their belt in Aspen, the crew opened Chefs Club NY in the historic Puck Building in the fall of 2014. The interior is designed by David Rockwell, who succeeds in the goal of letting each seat in the house feel as though they are right in the action. 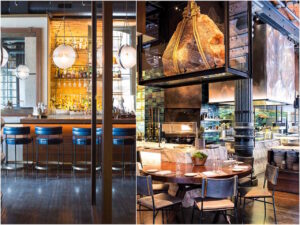 The massive open kitchen, which itself has a number of components including an open oven, anchors the space with a plethora of seating choices surrounding it. Even the welcoming bar area sits directly across from the “chef’s table” part of the kitchen, meaning those who only come for a drink and a nibble get the full experience. Suspended above all of this is a 1,300-pound boulder of pink Himalayan salt which has the job of dispelling any negative energies.

Like any great restaurant these days, the Chefs Club menu changes with the seasons, but it also changes with the recent chefs. Luckily for those that can’t get tickets, visiting chefs leave behind signature ingredients to be used in their dishes. This summer, the menu featured a Jamón Iberico de Bellota with Beaten Biscuits and Sorghum Butter from Atlanta’s Linton Hopkins; Charred Octopus with Chickpea Panisse, and a Fluke Crudo “Puttanesca” from San Francisco’s Matthew Accarrino; and Green Circle Chicken with Carolina Gold Rice from Austin’s Grae Nonas and Michael Fojtasek. Not to be outdone, Chef Didier added refreshing chilled corn soup and specials like lobster rolls with Meyer lemon sabayon. 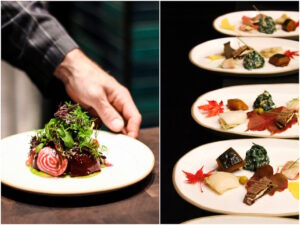 Augmenting the menu is, of course, the wine, with a list curated by Sommelier Keri Levens, formerly of The Modern and Aquavit. Ms. Levens presents an extensive wine list with a number of notable French vintages including bottles from Châteaux Haut-Brion and Latour, Domaine Rene Engel, and Bollinger’s 2004 ‘Vieilles Vignes Françaises’ Brut Blanc De Noirs, Äy. German Rieslings, Austria, Italy, Spain, Greece, and Slovenia round out the European options, while California, Oregon, and New York bottles represent the New-World styles.  Guests also can partake in a full bar and should be sure to check out what’s available from the “Chef’s Cabinet,” rare spirits handpicked by some of the most notable chefs in the world. Thomas Keller prefers the 25yr Macallan while Gabriel Rucker would like you to stay on trend with some La Croix Coconut Water. Unfortunately, a taste of Linton Hopkins’ Pappy Von Winkle is not for sale. 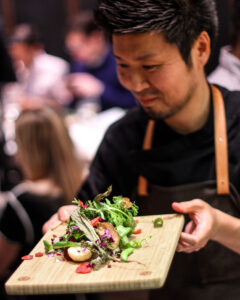 Similar to the Aspen Chefs Club, Chefs Club NY tends to highlight chefs from outside the local (read: East Coast) area, plus unusual dining experiences. Recent dinners included meals from noteworthy chefs such as New Orleans’ Alon Shaya, Tokyo’s Zaiyu Hasegawa, and Toronto’s Matty Matheson; a chance for Anne Saxelby to tell your “cheese fortune;” and mid-dinner performances by the members of the cast of Cirque du Soleil’s “Paramour.”

In this vein, comes a wine-driven dinner Keri is working on with Chef Didier. The dinner is a study in wine pairing and enjoyment, with a focus on how each wine pairs with the exquisite dishes. Each diner will be given a “mystery wine” encased in a brown bag with a surprise bonus! A few patrons will unknowingly be drinking from some very high-end, sought-after bottles, getting much more than they paid for. At the end, the brown bags come off and all will be revealed. Tickets for the meal should be available soon, so keep your eye on ChefsClub.com for the dinner announcement.

Chefs Club is located at 275 Mulberry Street. It is open seven days a week for dinner service, and for brunch on Sundays.