It’s time to dust off the grill, prep the pit, and smoke some coals. May is National BBQ Month and the official kick-off for outdoor grilling season. Many people refer to a good old-fashioned warm-weather cookout as a “barbecue.” But ask any Southerner (including this Tennessee gal) and you’ll be quickly clued into what true ‘cue is… and what isn’t. Barbecue may sound like casual fare, but like a wine, the absolute best BBQ takes time to make and requires a balanced complexity of spice and fruit notes, sugar and acid. Today, no matter where you’re getting your smoke on, there are as many versatile wine pairing options as there are styles of ‘cue. 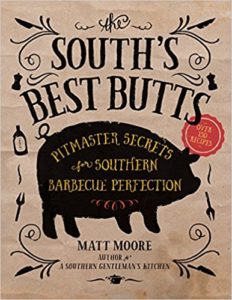 Barbecue is practically a religion in the Deep South, notes Matt Moore, author of “The South’s Best Butts: Pitmaster Secrets for Southern Barbecue Perfection.” Moore writes, “For the Yankees, BBQ in the South is less verb and more noun. Barbecuing is not simply throwing meat on the grill and slathering it with sauce….Barbecue takes more time, patience, and practice to perfect.”

Barbecue is about cooking meat low and slow over high heat, usually wood or charcoal. While many consider it a “born in the USA” cooking tradition, barbecue’s roots began further south in the Caribbean and Mexico where indigenous tribes cooked their food over a fire pit. Fifteenth-century Spanish explorers like Christopher Columbus and Hernando del Soto had their first taste of these smoky meats when their ships landed in on the islands, later christened Hispaniola. They referred to this new delight as  “barbacoa,” Spanish for “barbecue,” which is the method of slow cooking meat that’s been seasoned with spices. As the explorers headed north to conquer new territories, they took their food findings with them. 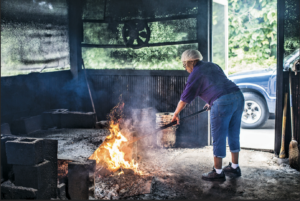 The official “Barbecue Belt,” stretches from the Carolinas to Kansas and Maryland to Texas, but these days you can find good BBQ coast-to-coast, from New York (e.g., Blue Smoke, Mighty Quinn’s, Fette Sau, among others); to Chicago (Smoque BBQ), and  Portland, Oregon (Podnah’s Pits) to name just a few examples. Read about different barbecue styles around the USA in this Fodor’s article.

BBQ pitmasters throughout the south and heartland are as revered as any James Beard Foundation Award-winning chef. In fact, a few have actually won James Beard Foundation Awards, including Aaron Franklin, at Franklin Barbecue in Austin, Texas, the first pitmaster to ever win a JBF Best Chef Award (Southwest Region, 2015). On May 8, Rodney Scott, owner of Rodney Scott’s Barbecue in Charleston, S.C., became the second pitmaster to win the Best Chef Award, this time for the Southeast Region. Other BBQ restaurants who’ve been recognized among the JBF Awards “America’s Classic Restaurants” for their enduring character and soul-satisfying food include Lexington BBQ in Lexington, NC,  The Skylight Inn in Ayden, NC, Jones Bar-B-Q Diner in Marianna, AR, and the Original Sonny Bryan’s in Dallas.

With BBQ no longer being relegated to just the casual backyard, beer-pounding fodder, your libation choices don’t need to stay stagnant as well. Wine and BBQ can be a perfect match if you pair them right. Here are some tips: Pairing wine with BBQ takes more than just considering the meat and spices (a.k.a the “rub”). There’s also the sauce. Styles of BBQ through the “Belt” are defined as much by the sauce (e.g., molasses, mustard, vinegar) as the type of meat (e.g. pork, beef, lamb, chicken). 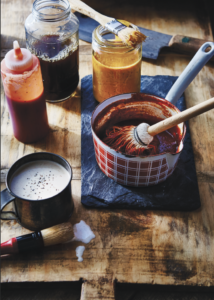 In his book, Matt Moore says there are “five mother sauces” in BBQ, a reference to the term for the five key sauces that shape classic French cuisine (tomato, hollandaise, béchamel, Espagnole, and velouté). In BBQ, these sauces also indicate geography in as much as flavor to the dish. They are: Sweet (tomato and molasses base), popular in Tennessee and Kansas City; Vinegar (peppery, with or without tomato), a trademark of North Carolina cue; Black (vinegar with Worcestershire sauce), an Appalachian signature; White (mayonnaise, horseradish and vinegar), popular in Alabama; and Mustard (vinegar, tomato, yellow mustard), found in Georgia and South Carolina.

Like any condiment, the sauce should always be served on the side and not smothered all over the meat. And like any food and wine pairing, it’s important to consider the balance of acid, fruit, savory, and sweet when selecting a BBQ wine.

Matt Moore says, “For me, wine and BBQ go hand- in- hand. Some folks like to play up the smoky notes of ‘cue with wines like Côtes du Rhone that have smoky and peppery flavors, and notes of terroir.  Others prefer sharp, acidic wines to cut fatty flavors of pulled pork and brisket. Pairing is all a matter of taste and preference.”

Here are some handy clues to minding your wine pairs and ‘cues: 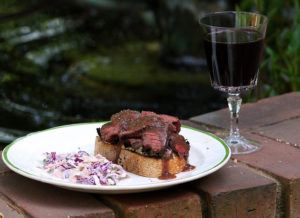 A red wine with high tannins will balance out the richness of brisket or beef ribs. Think Malbec, Cabernet, or Zinfandel. Medium-bodied reds like Sangiovese or Garnacha/Grenache complement savory chopped pork or baby back ribs. A lighter red Bardolino, Beaujolais, or Pinot Noir would pair well with chicken or salmon, Or, try a fruity Spanish Rosado (Navarra or Rioja) with spicy sausages or shredded pork sandwich.

If your palate prefers white, try a Grüner Veltliner, dry Riesling, or Orvieto (Grechetto) to balance the sweet and acid the sauces, especially mustard or white versions. Finally, don’t, neglect bubbles. While many BBQ fans like to crack open a cold brew with their ‘cue, why not try a refreshing sparkling rosé instead? After all, don’t bubbles go with everything?

Whatever your BBQ style, be ready to tuck in your napkin for a savory feast produced from one of America’s (and Summer’s) most enjoyable pastimes.

There are a slew of specialized BBQ events held across the country. Meet some of the country’s top pitmasters at the annual Memphis in May World Championship BBQ Competition May 16-19, the Big Apple BBQ Block Party in New York City June 9-10, and Cochon 555, a U.S.A. BBQ lovers’ roadshow pairing swine and wine (several dates).

You can also check out Wine4Food’s Top-5 BBQ Experiences Here.

Georges Duboeuf Jean Ernest Descombes Morgon 2015 (Beaujolais, France). A Beaujolais Cru made from the Gamay grape. Bright garnet with notes of cherry, kirsch, and peach, with a silky mouthfeel and substantial tannins. $21

Domaine Nicolas Croze Les 3 Grains Rouge 2016* (Rhone Valley, France). A supple red made with 70% Grenache and 30% Syrah with smooth structure suppleness on the palate revealing subtle hints of pepper and spice that flirt with grilled, smoky meats. $15
*inquire with one of these retailers

Old Soul Pure Red Blend.  A blend of Cabernet Sauvignon, Zinfandel, and Petite Sirah, with intense aromas of dark cherry, blackberry, licorice and a hint of spice and velvety tannins. $13

Switch Your Brew for Bubbles

Umberto Cavicchioli 1928 Lambrusco (Modena, Italy) The slight sweetness of this sparkling red wine refreshes the palate and quenches the flames of hot-and-spicy dishes. $10