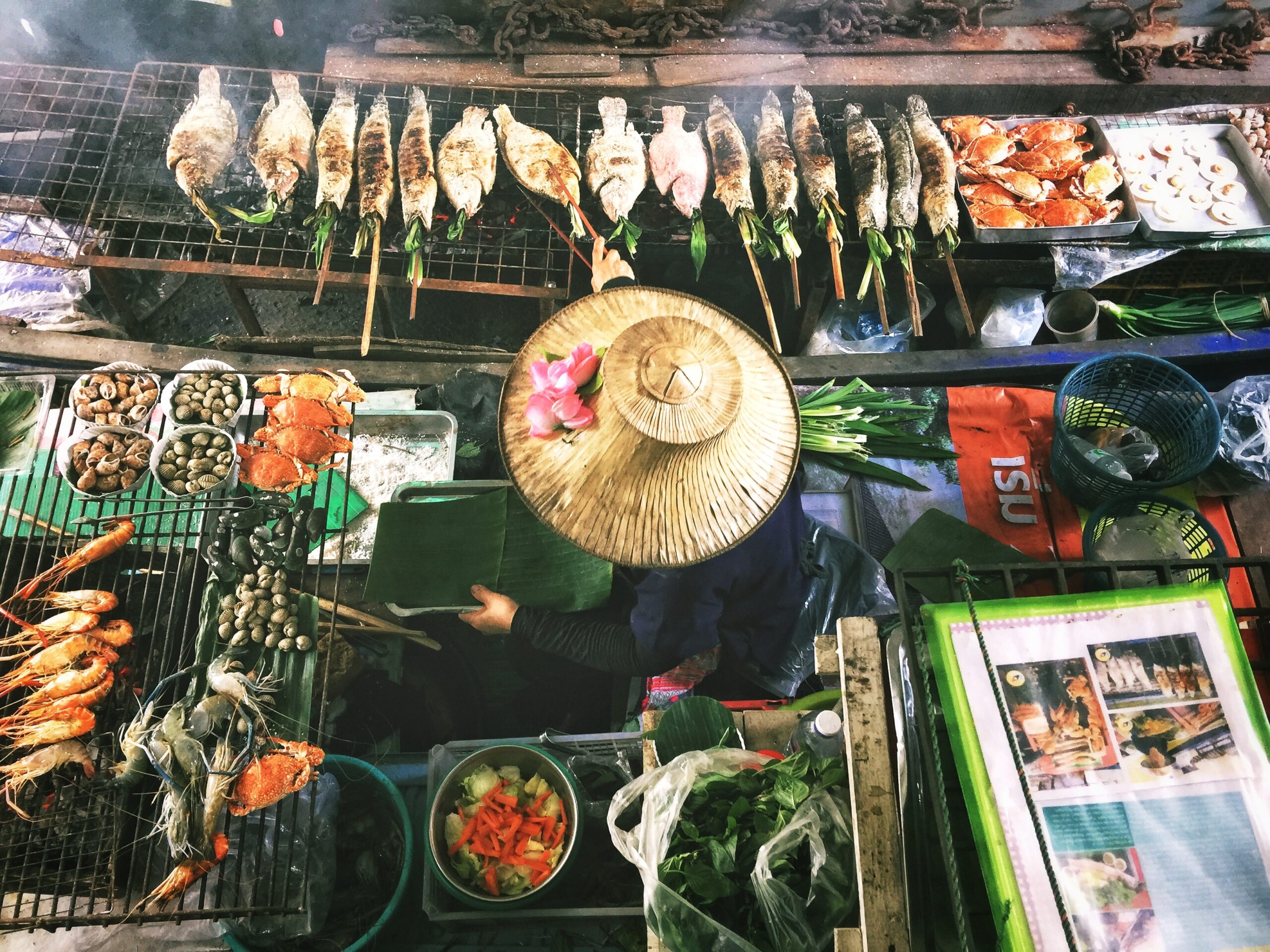 Whether you choose to have an elegant dinner in a Michelin-starred restaurant or sample street food at a vibrant night market, you’re in for a very special culinary experience in Thailand. And when you throw in a dash of stunning scenery, rich culture and spices from chefs who really know how to combine ingredients, you have a recipe for a unique and superb vacation.

Let’s start in Bangkok. A boat ride through the canals stopping at the local community of Klong Bang Luang for a puppet show is a must-do. And for dinner, the Michelin starred restaurant Nahm, inside the elegant Como Metropolitan Hotel, is phenomenal. Try the Heritage tasting menu – it’s a banquet— with each dish beautifully presented. We started off with several appetizers including a miang of lobster, chicken and green mango. Next came a fish stew of blue swimmer crab, wild prawn and red grouper inside a grilled banana leaf. It was a little spicy, but coconut milk cut the heat of the red chili peppers. Also fabulous were the yellow curry with blue swimmer crab served with betel leaves and the river prawns in a samphire sauce with garlic, shallots and peanuts. Desserts featured coconut, the pandan leaf, different kinds of rice (roasted, fermented, and sticky just to name a few) and fruits (passion fruit, dragon fruit, mango). Try the coconut custard with a coconut ice cream lollipop. And, if they know it’s your birthday, they might surprise you with a birthday cake. They did me. 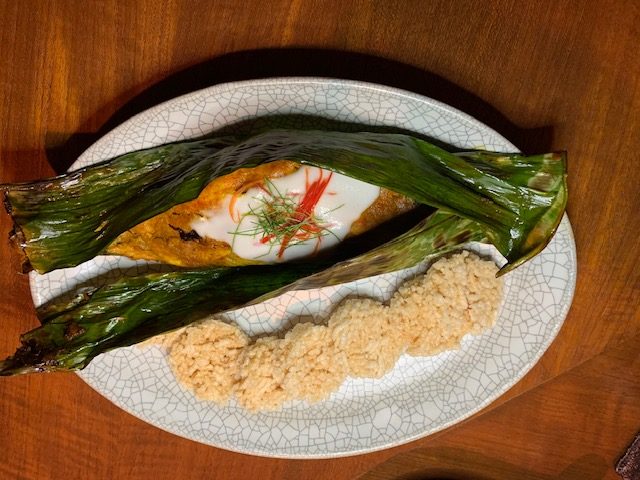 I can also recommend breakfast at the hotel where you can order thee best avocado toast ever, gorgeously presented with spirals of cucumber on top.

After breakfast we headed 2 and half hours west to Kanchanaburi, a city of   historical significance. During the Japanese occupation of Thailand in World War II, Allied prisoners of war and forced laborers built the bridge over the River Kwai and the infamous Burma Railway which became known as “the death railway” because more than 100,000 people died during its construction. Today, tourists from all over the world come to see the reconstructed bridge and travel on a section of the railway that still operates.

We stayed at the Away Kanchanaburi, a beautiful country resort with a pool and spa on the River Kwai. The hotel’s restaurant, Rice Barge, sits over the water and serves wonderful, traditional Thai cuisine – and the most exquisite serving of rice I have ever seen. This simple rice dish really took my breath away.  A cone shape of steamed blue Jasmine rice is wrapped inside a banana leaf that is decorated with a gorgeous garland of exotic white crown flowers and purple amaranth flowers. The blue color of the rice comes from the butterfly pea flower that turns the rice blue. Thais typically use a powder made from the butterfly pea in drinks and serve it with a piece of lime or lemon. When you squeeze in the citrus, your tea or alcoholic cocktail turns from blue to a purplish magenta. It’s chemistry, but it seems like magic.

Speaking of magic, our next stop was Phuket, an island in the south of Thailand on the Andaman Sea. The Anantara Layan Resort is a breathtaking, luxury property boasting residences (villas on a hill) with a private pool, dining room, butler, cook service and terraces with incredible views of the sea. Everything is sleek and modern. The hotel section of the resort is down the hill on the beach. The resort has an amazing spa and several dining options including Age, a restaurant and bar serving an international cuisine. Their version of the Cosmo uses vodka infused with black rice. The appetizers hailed from Spain, France and the sea. Grilled kobe steaks are a specialty and I can recommend the rib eye with a black truffle sabayon sauce.

The Dee Plee restaurant offers Thai cuisine and cooking classes where you can make a chicken coconut soup or a musseman beef curry while learning about spices and how to use ginger, lemongrass, kaffir lime leaf and galangal (sparingly!). Did you know that galangal (of the ginger family) is supposed to help decrease blood pressure and is good for fever and a sore throat? And a little-known benefit of lemongrass—rub it on your skin and it acts as a mosquito repellant. 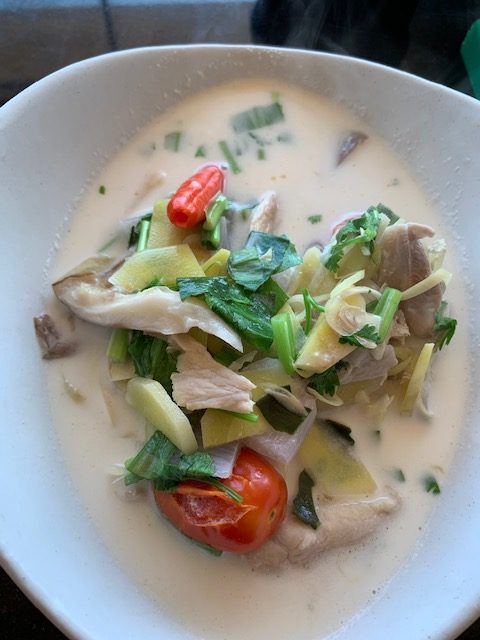 One of my favorite restaurants in Phuket was the famous Blue Elephant Restaurant. Situated in the old town, it exudes old world charm. Lit up at night, the historic building is gorgeous. An old mansion built in 1903 in a Sino-Portuguese style, it had been the governor’s residence. In the past, Phuket was a center for foreign trade and many Chinese and Portuguese settled there. The cuisine at the Blue Elephant is a combination of Royal Thai and local Peranakan dishes. The Peranakans were early Chinese migrants who settled in Phuket, Indonesia and Malaysia. The menu combines Chinese ingredients with Indonesian and Malay cooking techniques. It is said that Pernakan is less spicy than traditional Thai food, but frankly, I found this idea of “less spicy” dependent upon who is doing the tasting.  The food was wonderful. The Pernakan seabass was served with a homemade curry of fenugreek, black garlic and coconut cream. Try the Tubo dessert—a caramelized bird’s nest filled with adzuki beans and sweet potato and accompanied by jasmine coconut ice cream.

It’s an easy hour and 45 minute flight from Phuket to Chiang Mai, the largest city in the north of Thailand. There are so many reasons to visit Chiang Mai, it is hard to list them all. It is known for ancient temples, an old town with some of the original walls still intact, lively markets celebrating Thai culture and products, nearby elephant camps, nearby hill tribe villages, and food. Chiang Mai is a foodie’s paradise, with choices ranging from Royal Thai cuisine to street food and numerous options in between. It is also a shopper’s paradise with extensive markets featuring local products, artisan work and clothing from the nearby hill tribe villages.

I began my stay at the sleek and luxurious Anantara Chiang Mai Resort, in the center of the city offering rooms or apartment-like suites with kitchen, living room and dining area. But there’s no need to cook. The resort has several wonderful restaurant options. Let’s start with breakfast where you can sit inside or outside on the terrace facing the Mae Ping River that runs through the city.  It is a veritable smorgasbord of international cuisines offering traditional Thai dishes, Chinese dumplings and Western breakfast. You can choose from the buffet (with stations that span across several rooms) or order from the a la carte menu or do both. I loved the Thai coconut pancakes and the Chinese noodle soup. An added treat was the fresh smoothie area where you could select your preferred fruit. Passion fruit was definitely a favorite.

For dinner, the on-site restaurant, The Service 1921, has plenty of intrigue to enjoy before enjoying the cuisine. The building dates back to 1921 and used to be the British consulate. The restaurant reimagines the colonial period and has a spy theme with pictures and memorabilia of famous secret agents throughout history. The bar serves a Kombucha Cocktail with their own secret syrup, fermented tea, pure rose nextra, lime juice, mint leaf and optional vodka. Delicious. We ate upstairs in the secret dining room. Part of the fun is finding it. Which wall in the library opens up and reveals the dining room? The clue is on the floor. 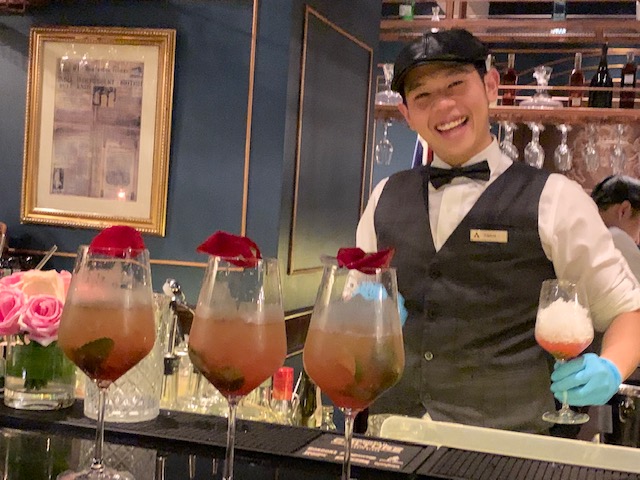 Both the red and white wines came from the GranMonte vineyard located in the Asoke Valley, an area surrounded by mountains about two hours from Bangkok. It has an ideal microclimate for growing high quality grapes. Two house specialties include the Chiang Mai noodle curry with chicken (Khao Soi Ghai) and a Szechuan black bone chicken dish that is actually made from chickens with black bones. I discovered a nutritional surprise—black bone chicken has less fat than regular chicken.

For an after-dinner bonus, consider a short walk to the vibrant Anusarn Market, a night market just a few blocks from the hotel. They are open until 11 and sell all kinds of artifacts, clothing and tribal village wear. Check out the cool elephant pants at the market or in the surrounding street stalls.

Another superb dining experience in Chiang Mai was the atmospheric Ginger Farm Kitchen, a farm to table restaurant with a funky ambiance, interesting assortment of wicker hanging lights, and a vast menu. The focus is on healthy food and organic ingredients. They too make a wonderful chicken khao soi, and another dish typical in the north called pad kra prao, a chicken stir-fry with holy basil. If you desire something less spicy, there is the more familiar pad thai that was excellent.

I had the shrimp version that came with enormous prawns. In addition, there are numerous fish, beef, and vegetarian choices. Vegetarians and vegans might also consider the causal and reasonably priced Goodsouls Kitchen that serves breakfast all day as well as elaborate salads, soups, veggie burgers, and smoothies for lunch or dinner. 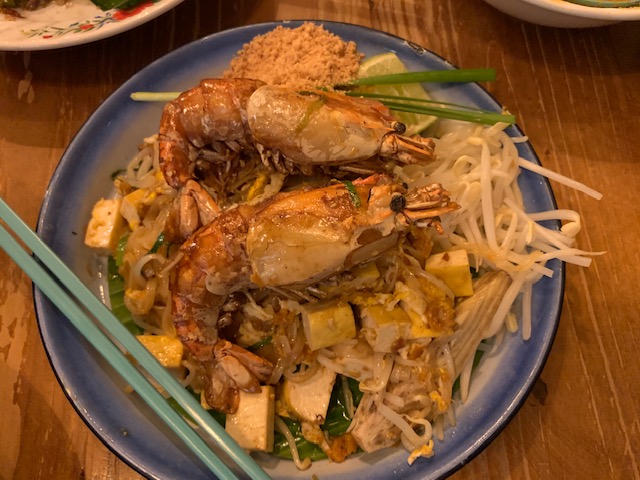 We divided our four nights in Chiang Mai between two resorts. The second was the Dhara Dhevi, a spectacular 60-acre resort that was built on former rice paddies. It is a jaw-dropping village that was designed to preserve the art forms of the Lanna Kingdom who ruled over Northern Thailand from the 13th to the 18th century. Lanna means “land of a million rice fields.” The village consists of elaborate temples, pagodas, stone carvings, sculptures, and canals. You enter the estate and you are in a different world. The domes in the main lobby come from Burma and the spa building replicates a Mandalay palace. Carts whisk you around the resort and take you from the palatial lobby to your individual colonial style mansion. While each house is different, many are two stories with a garden, patio, living room and kitchen downstairs and bedroom and terrace with outdoor jacuzzi upstairs.

In true Thai resort style, the breakfast buffet offers almost everything including a Western breakfast, Thai noodle dishes, and Chinese dumplings. For dinner, Le Grand Lanna restaurant near the entrance gate has a wonderful menu and ambiance. The chicken grilled in pandan leaf and the shrimp spring rolls were excellent. Dinner was accompanied by a show with traditional dances and if you eat outside on the terrace, you’ll have a front row seat.

Nearby is one of the most popular shopping experiences in Chiang Mai. The Sunday walking street is a lively outdoor market on Sunday nights featuring local foods, handmade crafts and clothing. The street is lined with temples and various stages are set up for musical performances. It gets crowded, but it’s open until midnight.

And if you want to take superb to the superlative of superb, I strongly recommend spending a half-day (or more) at an elephant sanctuary in Thailand to learn about these extraordinary animals.  Trust me:  it will be a unique and amazing experience and you will take home magical memories. 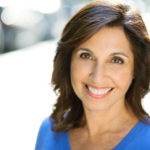