Friuli-Venezia Giulia, Italy’s most northeastern region, is known by connoisseurs for producing excellent white wines. Its under-the-radar status as a travel destination is just one reason you should not sleep on this charming locale. An hour-ish from Venice, Friuli is awash in mountain vistas and well-preserved villages, providing an escape to the quaint life. Rich culinary traditions—influenced by centuries under revolving empiric rule and proximity to Slavic neighbors—include Montasio cheeses, San Daniele prosciutto and hearty polenta and pasta dishes. And then of course, there’s the wine. 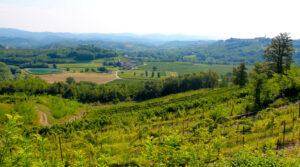 As with Italy in general, Friuli’s reputation for world-class wine is a relatively recent development. Historically, the country’s small-scale farms were generalists; families raised their own corn, grains, dairy and grapes, the latter of which were then sold to winery cooperatives. Wine was plentiful and affordable—but not incredible. 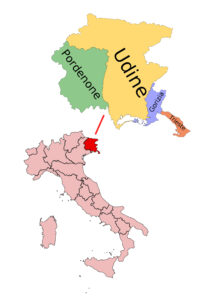 When phylloxera (a miniscule insect pest) and powdery mildew tragically swept across Europe in the late nineteenth century, Friuli’s vineyards were wiped out. Most of the region’s 350 native grape varieties disappeared. In an attempt to salvage wine production, growers grafted well-known European varietals onto American root structures resistant to the pest. This costly endeavor saw wine production slow until the 1960s, when a group of passionate producers sought to revive Friuli’s ancient vines, and with great success!

As I learned during a trip in late August, in contrast to French wine regions dominated by singular varieties, Friuli’s most distinguishing feature is the sheer variety of grapes. D.O.C. laws have helped to organize and elevate Italy’s wines; however, producers are still largely independent operators free to experiment with different grapes and methods. The typical compactness of Friuli estates—most are less than 50 acres—encourages boutique production of regional styles. 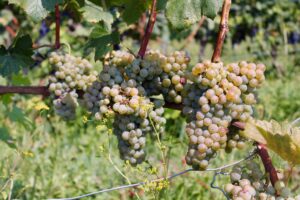 The most popular grape among locals is the aptly named Friulano, a relative of Sauvignon Blanc and a rarer find abroad than the region’s Pinot Grigio. Friulano’s hearty vines thrive throughout the region’s hilly terrains and varied climates, yielding versatile styles that are typically dry, light-bodied, and range from straw yellow to golden in hue. Characteristically fragrant of white fruit, Friulano can be refreshingly acidic or softly elegant with aging, which sometimes takes place in French oak barriques (a very specific size/shape of oak barrell).

To fully appreciate the diverse wines and quiet passion of Friuli producers, my travel mate and I rented a tiny Fiat and spent a few days visiting family-owned operations in three different D.O.C. regions. We were fortunate to have a native Friulian friend as our guide to share with us his homeland’s culinary and viticultural treasures.

Wish to embark on your own Friuli adventure? Use our itinerary as a guide or jumping-off point:

From Venice’s Marco Polo Airport, traverse highways and narrow mountain roads to discover incredible views and vineyards throughout the region. Heading northeast, the Adriatic coast gives way to plains and then wooded mountain backdrops in Pordenone. Continue east to discover the sprawling sun-drenched valleys and hills in Corno di Rosazzo, which boasts Fruili’s most well-known wine D.O.C.’s Colli Orientali and Collio. Before crossing into Slovenia, follow the border south until Carso’s rocky, stepped terraces greet you on their descent down to cosmopolitan Trieste and the shimmering coast. 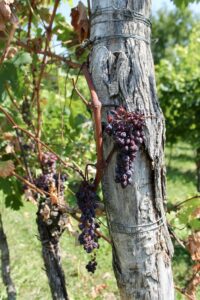 In 1987 winemaker Emilio Bulfon was one of the producers who contributed to unearthing ancient vines and publishing the first study of all native Friulian grapes. In 1990 he established his family-run winery in Valeriano, where Emilio himself hand-painted vignettes of heritage grapes on the walls of the cellar. The 11 acres of native vines are bordered by forests and harvested by hand. It’s easy to study the ancient grapes through a tasting of Bulfon wines, each named simply after the varietal: Sciaglin, Cividín, Cjanoros, Piculit Neri, and Regozco dal Peduncolo Rosso, to name a few.

Abandoning architecture studies, Alessandro Vicentini Orgnani joined the renewed winemaking movement at age 23. “When I started, it was a good moment,” he says. “I could imagine a good future for this place because something important was starting with Italian wine, especially for this area.” His biodynamic winery delivers sophisticated, authentic iterations of each varietal. They range from an aromatic, greenish-gold Sauvignon and a jammy, aged Merlot to Ucelùt Passito, a concentrated dessert wine that smacks of dried fruit and orange peel and whose grapes are harvested early to maintain higher acidity, before aging six years in French oak.

On to Corno di Rosazzo… 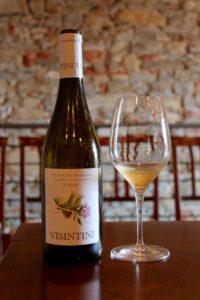 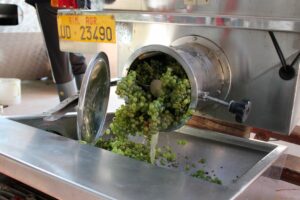 In one valley of Colli Orientali, Visintini resides within an old manor bordered by regal cypress trees. The third-generation family vintner offers a robust portfolio of Italian classics including Pinot Grigio and Sauvignon Blanc, in addition to regional grapes. Some of its Friulano and Pignolo (the Barolo of Friuli) are aged in anfora, the huge, traditional earthenware jugs. Visinitini’s Ribolla Gialla—a grape referred to by locals as “the better prosecco” thanks to its high acidity—yields small bubbles and balanced acid; it is wild yet elegant.

During his career as a United Nations ambassador in Somalia and Sudan, Friuli native Fernando Zanusso competed with French friends about which country makes the best wine. Upon retiring from foreign affairs, he opened his own winery in 1996 with vineyards in Colli Orientali and Collio, which he now operates with his son Mario. Their goal is to provide the best conditions with the least interference in order to allow their eighty-year-old vines to be “a reflection of the soil, of the growing season.” A lovely way to evaluate the vines’ varied terroir: Enjoy a side-by-side tasting of the producers three Friulano wines, each grown in a different region of the vineyard.

Down to the Carso… 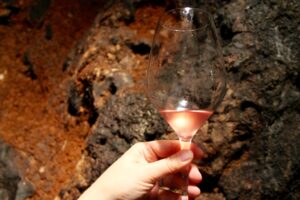 Sandi Skerk is the mop-haired, soft-spoken mastermind behind the unique natural wines created on the rocky Carso hillside in Prepotto, just twenty minutes outside of Trieste. Old, native vines, including Vitovska, Malvasia, Ograde, and Terrano, are imbued with bready, yeasty notes and a pleasant, tannic funk thanks to wild fermentation, extended skin 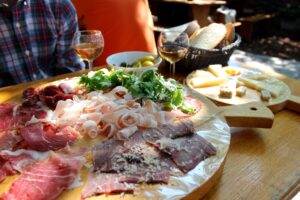 contact, and cap punching (a technique of frequently mixing grape solids into the juice to extract more tannins, color and flavor). Visit Skerk in April or August during their bi-annual osmizas (a tradition borrowed from Slovenia when locals sell homemade wine and edible goods) to enjoy a spread of housemade salumi and cheeses alongside a carafe of Skerk wine in the shady courtyard.

A note about pairings:

Most of the region’s bright, acidic whites pair pleasantly with light seafood dishes; their acidity also cuts nicely through richer foods, like a spread of local prosciutto, salami, and mild Montasio cheese. Light-bodied reds can be sipped on their own or alongside hearty fare, like that of the Friuli mountains: polenta, beans, venison, wild boar, aged cheeses or a meaty bolognese.

Whether you trek to the heart of Friuli to experience these interesting wines at the source or seek them out to enjoy at home, we’d recommend these few bottles that found their way into our luggage:

Jenna K. White is a freelance food and travel writer currently based in Rotterdam, Holland’s vibrant second city. You can follow her culinary-centric adventures (and her cats) on Instagram at @starvingfoodist.