The idea of “straw” wine may conjure up an old bottle of Tuscan Chianti wrapped in a straw basket, but it refers to the time-honored process of making some of Italy’s most renowned sweet wines: Vin Santo and Passito.

The ancient process for making these wines is called appassimento. It involves partially drying bunches of grapes on straw mats, pallets, or by hanging from ceiling rafters, in a well-ventilated room to achieve optimum sweetness and concentrated fruit prior to vinifying. The length of time for drying the grapes is three to six months. After the grapes are dried, they are lightly pressed to extract the must (seeds, stems and skin) which is fermented to achieve the desired amount of sweetness and alcohol level. The final step is placing the fermented wine in small wood barrels for many months – or even years – to develop flavor and complexity.

While each wine has its own distinct flavor profile, they have a lot in common: the process is arduous, and the wines are usually made in small batches since much of the grapes’ juice evaporates in the drying process. That’s why many Italian families bring these wines out for special occasions, for holidays, and to share with cherished guests.

Visit a private home in Tuscany and most likely at the end of the meal, your host will proudly offer a glass of their family’s special Vin Santo with a small plate of cantucci, almond biscotti. Vin Santo translates to “holy wine,” as its historical use was for Catholic Mass. It is made in other areas of Italy including Umbria and the Veneto, but Tuscany is the heart and soul of its production.

Vin Santo is made from white grapes, such as Trebbiano, Grechetto and Malvasia, or the red Sangiovese. The latter, referred to as “Occhio di Pernicere,” (partridge eye) is amber-red with a flavor profile similar to spiced ruby Port.

Vintners select only the best grapes to dry for three to six months, before placing the pressed juice in small sealed oak or chestnut wood barrels called caratelli for a minimum of three years (four for a Riserva), and sometimes up to ten years. As the wine naturally ferments, over time it will develop a “mother yeast” that traditional vintners will carefully preserve to propagate new batches of wine. Think of it as wine DNA preservation.

Vin Santo styles vary depending on the how long the grapes are dried, the fermentation process and aging. During two visits to Tuscany, I tasted several that ranged from Sauternes in character with honeyed fruit and floral notes to a more oxidative and nuttier fino or sweet oloroso sherry.

While dipping crunchy biscotti into a glass of Vin Santo is the traditional way to enjoy this wine, Rachel Lowe, Beverage Director for Spiaggia restaurant in Chicago, suggests a savory pairing, “Instead of Sauternes, try Vin Santo with a seared piece of foie gras. We serve in a set with a squash soup.”

The name Passito refers to the appassimento method of drying grapes on mats or racks to achieve sweeter concentration. Passito can be made from white or red grapes.

Passito di Pantelleria DOC is the designation for wines produced on the volcanic island of Pantelleria, Italy’s southernmost point between Sicily and northern Africa. The ancient white grape used to make the passito is Zibibbo, which is Arabic for “dried grapes.” It’s also called Muscat of Alexandria. These wines have a toasty, candied orange peel aroma and flavor that pair beautifully with spicy fruit cakes and pies, but also with savory dishes and tangy cheeses.

“A passito like Ben Ryè has a wonderful caramelized flavor that isn’t cloying in its sweetness. I would suggest cow or sheep cheeses from firm to softer and stinkier. It would also work well with pâté, seared foie gras or terrine served with a fruit compote, and also as a sweet wine option for savory fall salad such as our roast squash and hazelnut salad,” said Lowe. 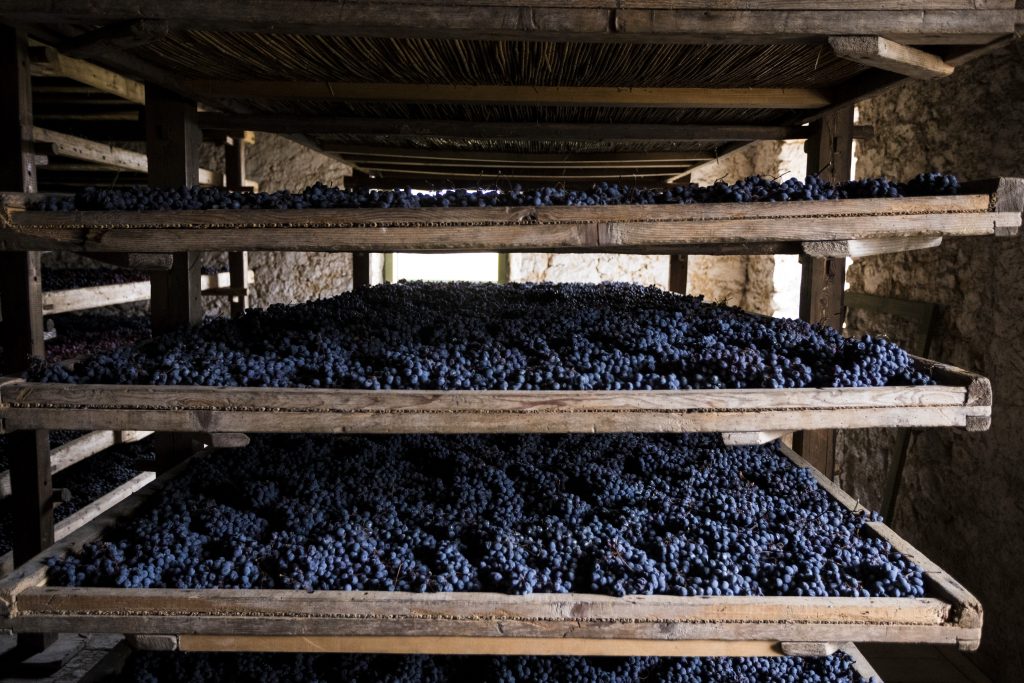 Red grapes drying on racks at Masi Agricola in Valpolicella

Recioto della Valpolicella is a lush sweet wine made in the Veneto. Recioto is made with red grapes local to the region: Corvina, Rondinella and Molinara, which also make the Veneto’s renowned Amarone wines. Recioto della Valpolicella wines tend to have jammy dark plum fig and cocoa notes and silky tannins. “Recioto pairs beautifully with a dark chocolate and also blue cheese,” notes Lowe.

Sommeliers are still finding ways to encourage more customers to try these wines. Many offer pairings with dessert on their menus. “While Vin Santo and Passito are not as popular as Sauternes, Port or ice wines, the quality is just as high. They have not received the same attention from critics and sommeliers when it comes to pairings,” said Gabriele Guidoni, Corporate Beverage Director for the Fireman Group in New York City, whose restaurants include Trattoria dell’Arte, Bond 45 and Fiorello. “We are all familiar with pairing Sauternes with cheese at the beginning or the end of a meal, but we ignore the possibility to pair a Moscato Passito with blue cheese.”

Because these wines are labor-intensive to make and produced in small batches, they are sold by the half-bottle or by-the-glass in restaurants. The half-bottles make thoughtful hostess gifts, and the wines provide an indulgent sweet ending (or beginning) to any holiday meal.

Here are some selections to consider for gifts and to enjoy for your holiday meal:

Badia a Coltibuono Vin Santo del Chianti Classico DOC 2010 A blend of Trebbiano and Malvasia. Golden amber with notes of candied fruit, citrus, apricot and dried figs Pair with blue cheese and spiced nuts to start a meal and shortbread cookies or ricotta cheesecake at the end. $50 half-bottle.

Abbadia Ardenga Vin Santo With notes of raisin and caramel