Sherry: The Unsung Essence of Spain

Sherry. It’s time for the bottle to come down off the shelf and into your glass

Sherry, a fortified wine produced exclusively in the region of Andalucia in southwestern Spain, is the essence of this country. Ancient Phoenician traders built a business on it. British ship merchants risked stormy seas for it. Flamenco guitarists crooned about it. Food and wine aficionados have appreciated its versatility for pairing with many foods, preparing in cocktails, and adding a kick to soups, sauces and sautés. Sipping a cold glass of a dry fino sherry on a hot summer day with a plate of charcuterie, cheese, and fresh seafood may be one of the ultimate Spanish experiences.

In her best-selling book, “The Wine Bible,” Wine Educator Karen MacNeil said, “If there were justice in the wine cosmos, Sherry would be one of the world’s best-loved, oft-sipped wines, As it stands, Sherry – the unsung hero of five great wine classics (Sherry, Port, Madeira, Champagne, and Tokaji) – is largely misunderstood and underappreciated.”

“That it is sometimes cast as the libation of little old ladies is nothing if not amusing. Sherry, after all, is the daily drink of southern Spanish men- known for their machismo, love of bullfights, and prowess at horseracing, not to mention their predilection for bars and cigars.” 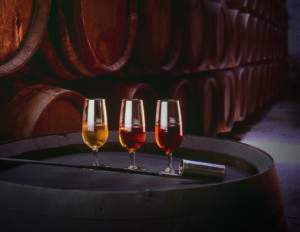 One big reason Sherry has been misunderstood is that many consumers were simply unaware of what Sherry is and how to enjoy it as an aperitif or with a meal. Sherry is not just one wine. It’s a spectrum of styles, all with unique palate personalities.The two driest styles are called fino and manzanilla. An amontillado is a toasty, spicier medium dry style, and oloroso is denser and semi-sweet. The two sweetest are raisiny Pedro Ximénez and cream Sherry. Sherry should be consumed chilled and fresh. Open bottles should not be left on a bar shelf or in a refrigerator for more than a few days as the wine will lose its freshness.

To understand and appreciate Sherry’s complexity starts with the intricacies of how it is made and carefully blended. 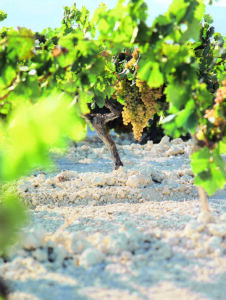 Located in the southwest coastal corner of Andalucia, The Sherry Triangle, officially called D.O. Jerez-Xérès-Sherry is where all sherry is made. The weather is hot and dry, tempered by ocean breezes. The startling chalky white soil, called albariza, is where Palomino Fino, a high acid white grape used to make almost all sherry, is cultivated. The other local grapes used for sweeter styles of Sherry are Moscatel and Pedro Ximénez.

Production involves several key steps once grapes are crushed and the juice is fermented. The wine is fortified following fermentation with neutral grape spirits, such as the Airén, a widely planted Spanish white varietal. This process raises its alcohol by volume (ABV) levels to anywhere between 15 and 22 percent (still wine is usually 13-15 percent ABV).

Sherry is then slowly oxidized; the exposure to oxygen is based on the style being produced. With a fino or manzanilla, a naturally occurring yeast strain called flor (the Spanish word for “flower”) develops and helps metabolize the fermentation process and preserve the dryness of these wines. 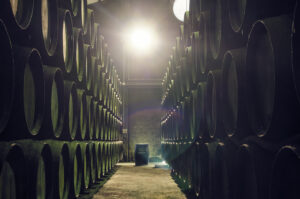 Finally, sherry undergoes a fractional blending process referred to as the solera system. Visualize multiple rows of stacked oak barrels filled with the fortified juice; the youngest liquid on top and the oldest at the bottom. Younger wine slowly blends with older as it progresses down through the rows of barrels to create sherry’s mosaic of aromas and flavors.

Scott Woltz, Wine Director for La Sirena, a Michelin rated restaurant in Manhattan known for its popular tapas bar, knows first-hand why educating customers about Sherry is key.  “Sherry has for many years been the most difficult, misunderstood styles of wine to sell. Paul Grieco (of Terroir fame) famously gave it away just to have people willing to partake in the virtues of sherry.

“Much like Champagne or Madeira, I think first-time sherry drinkers usually fall in love with the versatility, process, and history of sherry. The oxidized, briny style can be difficult for someone who may be used to lean, crisp, or neutral flavors, but sherry’s versatility ranges from bone dry to rich and nutty to sweeter styles, which makes sherry one of the dream food pairings and not just with Spanish food, but all cuisines,”

Scott shares his tips for pairing sherry with food below:

Manzanilla has delicate aroma and tastes of blanched raw almonds, apple essence, and chamomile flowers; which are grown in the area called Sanlucar de Barrameda where this elegant sherry is produced. The name “manzanilla” translates to “earth apple” in Spanish.

Fino is the driest and has tad nuttier flavor (think dry roasted almonds and a whiff of brine). This is the most widely produced dry Sherry. 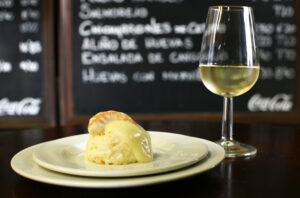 Both Manzanilla and Fino pair beautifully with many types of seafood, from sushi and grilled shrimp to smoked salmon and Japanese cuisine. A classic pairing is with cured meats like Spanish jamón, toasted nuts and olives. Consume bottles cold and within two days for optimum freshness.

Scott’s Tip: “I love both styles with bar snacks Think olives or nuts, which match perfectly, flavor for flavor, with the delicate fino/manzanilla style. The sheer briny and oily combination is to die for. Manzanilla and Fino are also amazing with young, fresh, soft cheeses such as Brillat Savarin or Camembert.”

Amontillado is a dry sherry with a toastier hue and fuller aroma due to extended oxidation. The essences of toast and hazelnuts come to mind sipping an amontillado. This sherry pairs beautifully with sautéed mushrooms, creamy soups and chowders, and salted cod with roasted potatoes. Drink chilled.

Scott’s Tip:  “Amontillado is the master pairing for tricky earthy flavors like mushrooms, artichokes, and asparagus. Asparagus is especially a food pairing nightmare and Amontillado is my ace in the hole for all things green and earthy.” 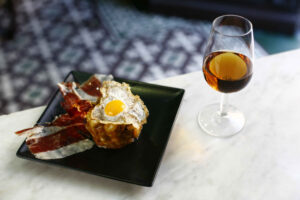 Oloroso (which means “fragrant” in Spanish) is a fuller flavored dark mahogany brown sherry. It ranges from slightly drier when made with 100 percent Palomino to sweeter when blended with Moscatel. Due to its longer aging, Oloroso has higher alcohol levels averaging around 18 percent. The fortification prevents the growth of flor yeasts found in drier fino and manzanilla sherries. This allows for longer aging and fuller flavor notes such as toasted walnuts, dried fruits, soft balsamic and allspice. This aromatic sherry pairs equally well with savory stews, roast duck or meat, wild mushroom casserole, foie gras and cured cheeses. As with the majority of Sherries, serve chilled.

Scott’s Tip:  “I like Oloroso with game meats: duck, venison, rabbit, you pick. It kills with our duck breast/heart, Spanish sobrasada, and honeycomb dish. The heat and body of the wine cut through the fattiness and bring everything together in harmony, and the caramel notes of the oloroso match the richness of the honeycomb….a great sweet and savory combo.”

Scott’s Tip: “Palo Cortado is a rarity, and who doesn’t like something rare? Once destined for fino, with the flor still present, the wine’s richness leads the cellar master to redirect the wine toward an oxidative aging path.  It’s simply the best of both worlds having the magic combination of carrying the delicate nutty bouquet of an amontillado while at the same time the rich roasted mouth-feel of an oloroso. This style can go across the spectrum of foods. It works well with our heartier seafood dishes like Octopus and Razor clams. I like it very much with our Mar Y Montana paella dish with clams, S.A.S.S.O chicken, pork belly and burnt salsa verde. It is also killer with hard cheeses.”

Pedro Ximénez (PX) envelopes the mouth with the sweet taste of liquid black raisins. The Pedro Ximénez grape is actually a white varietal. The grapes are dried on straw mats in the hot sun to achieve their intense sweetness. Pair with crumbly blue cheeses or decadently drizzle over ice cream.

Cream Sherry is sweetened Oloroso. Styles can range from chocolate and licorice to sweet roasted figs. While enjoyable served on the rocks or mixed with cocktails, cream sherry is also delicious served with warm pound cake and adds a spirited touch to French toast.

Scott’s Tip: “PX works as a great Spanish substitute for Sauternes. The syrupy richness is a perfect partner with blue cheese. I like it very much with La Sirena’s foie gras banana split (my favorite dish on our tapas menu) with drunken bananas, Nutella, and a negroni reduction. Or, if you are looking to start your day off early, pour it over your pancakes or waffles….my kind of breakfast!”

Want to learn more about Sherry? The fourth annual International Sherry Week, organized by the Consejo Regulador Jerez-Xeres-Sherry takes place November 6-12, 2017, in 25 countries around the world. Learn more about events and find more pairing suggestions for Sherry at www.sherrywine.com

Eight sherries to try from dry to sweet: