Tequila and Terroir: The story behind the spirit 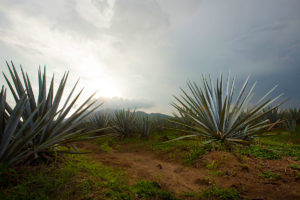 Many people don’t consider “terroir” when they knock back a tequila shot or sip a margarita. But, tequila has as much terroir (a.k.a. sense of place that defines a product’s flavors and aromas) as a bottle of fine wine. In fact, tequila is all about “place,” starting with its origins.

Tequila is a distilled alcoholic beverage made from blue agave, a succulent plant grown in the State of Jalisco in northwest Mexico. By law, all tequila is made in Jalisco or in one of the four tiny municipalities of Guanajuato, Nayarit, Michoacán, and Tamaulipas. 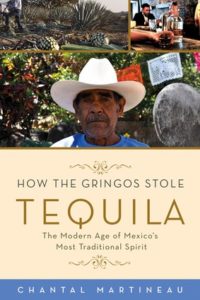 Journalist Chantal Martineau traveled throughout Jalisco to research her engaging book, “How the Gringos Stole Tequila.” She says, “My first true tequila tasting was when I realized the spirit was a terroir product. The conversation was all about soil and climate and altitude, just like grapes. The difference, of course, is that the agave plant stays in the soil for an average of seven years. During that time, its shallow roots are struggling to sustain the plant with nutrients and minerals from the soil in what tends to be a harsh landscape—cold nights, hot and dry days. And the effects of that struggle are reflected in the glass: the level of sweetness and acidity and even minerality are all affected by where the agave grew.” 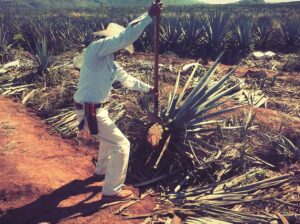 It can take several years to harvest an agave plant. Some mature piña (the agave heart) can weigh between eighty and a few hundred pounds! Using a sharp curved tool called a “coa,” the jimador (harvester) carefully removes and trims the agave leaves that protect the piña which is extracted from the ground. The piñas are then slow roasted in traditional brick ovens (“hornos”) or steamed in stainless steel autoclaves. This process converts the complex carbohydrates in the plant into fermentable sugar and softens the piña to make the sugar extraction easier. 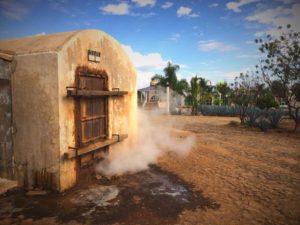 Once cooked, the piñas are then crushed to release the juice (called “aguamiel”). Often this is done using a traditional method called “tahona’ in which mules, oxen, or tractors are utilized in rotating a large grinding wheel within a pit to separate the juice from the fibers. The juice is washed, strained, and prepared for fermentation in tanks where the sugar is converted to alcohol. Sometimes the juice ferments in its own native (wild) yeasts for a more natural process which takes longer, or yeasts can be added to move things along. Depending on the process, this can take seven to twelve days after which the fermented juice is transferred to steel pots or columns for distillation. Most tequilas are distilled at least two times and sometimes three. The final step is aging in French or American oak barrels for a reposado or añejo tequila. 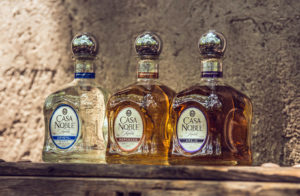 Blanco (labeled “Silver” or “Platinum”) is clear and either unaged or aged up to two months. It is usually bottled directly after distillation or kept in stainless steel for up to four weeks. This style of tequila has intense flavors and more “bite” to it.

Reposado (“rested”) is aged between two and eleven months in wood barrels or tanks. More honeysuckle gold in color, it has softer flavor notes and is enjoyably mixed in drinks or sipped neat with a wedge of lime.

Añejo (“aged”) is aged a minimum of twelve months. Amber in color, this smooth, richer tequila is perfect for sipping like a brandy.

So, let’s talk terroir. How do tequilas produced from highlands agave vary from lowlands? 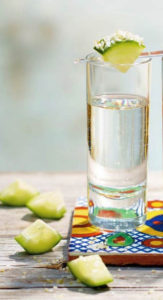 “Typically, tequilas from the Highlands are said to be sweeter and fruitier because of the richer soils, hotter days that encourage the development of sugars, and cooler nights that provide slower maturation of the plant. Tequilas from the Valley ([referring to it as] the “lowlands” is a term that doesn’t quite do justice to the altitude being some 4,000 feet above sea level) are said to be drier and earthier thanks to volcanic soils and a warmer overall temperature. But, having said that, production methods vary so greatly that it’s rare to be able to blind taste a tequila and know where it’s from,” Martineau says.

She adds, “Larger producers tend to source agave from both regions anyway, so I would say the philosophy and methodology of the producer are more important than region the agave is from. Remember, the agave can also be sourced from four other states—the highland/lowland debate is really just about Jalisco.”

In Mexico, sipping tequila neat in a glass with a slice of lime is a popular way to enjoy this spirit. In fact, Riedel, which is known for designing crystal glasses to capture the essence of a specific style of wine or spirit, markets a special tequila glass. However, Martineau suggests a simple white wine glass. She also notes that aging the spirit does not always mean it’s better, “I’ve never warmed to aged tequilas even though they’re often considered more premium because they’re more expensive. To me, the wood can cover up terroir. Besides, tequila is already ‘aged in the field.’”

How to approach tequila selection for cocktails: 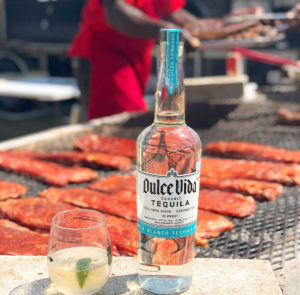 Shannon Poche, bartender at Leyenda, a pan-Latin cocktail bar, says “I like to use blanco tequila in shaken refreshing drinks that call for spicy bright flavors like Margaritas and Palomas. Blanco tequila is also great in a martini style cocktail; something where you really want the agave to shine through. Reposado is a good middle-man. It’s versatile and can be used in cocktails where you want a little roundness and barrel notes. Añejo is a good base spirit in a stirred Manhattan or an Old-Fashioned; cocktails where you want the toasted barrel and vanilla to come through.”

For pairing tequila with food, she adds, “Blanco tequila is a good match with ceviche, fish tacos, and anything with some heat. Reposado and añejo can go with any dark meats, molé sauces, and corn. Most agave spirits pair well with corn which also happens to be planted after a harvest of agave to return nutrients to the soil for the next crop.  There is a saying an old chef of mine used to say, ‘Ingredients that grow together, go together.’” The same saying applies to basic wine pairing as well, so this makes perfect sense when starting to approach pairing spirits too!

Still, don’t limit your enjoyment of tequila to just corn tortillas, carnitas and other south-of-the-border dishes, says Aaron Polsky, Bar Manager at Harvard & Stone in Los Angeles, CA,  “I naturally gravitate towards Mexico when pairing the food, but I also see a dish like Thai boat noodles pairing very well with a reposado tequila, and papaya salad going great with blanco. I think the key for a good tequila cocktail pairing is freshness from fruit and vegetables.”

Tequila is not just about the guac and tacos and shots and salt.  When you sip a fine tequila there’s more than a slice lime in the glass; there is a slice of history and terroir.

You may be familiar with popular brands like José Cuervo (the best- selling tequila), and Patrón (a top premium tequila).  You may have read about Casamigos, the tequila launched by Actor George Clooney and Bar Industry Impresario Rande Gerber. But if you want to dig deeper, here are few other tequilas worth a little “lime” light for their craftsmanship:

Don Julio: Founder Don Julio is credited with helping raise the bar for higher standards in production including his own super-premium products.

Padre Azul: This newer super-premium tequila with its “rocker chic” bottle laced with leather lacing and topped with an eye-catching metal skull head will be a conversation starter.