Wines to Drink with Indian Food 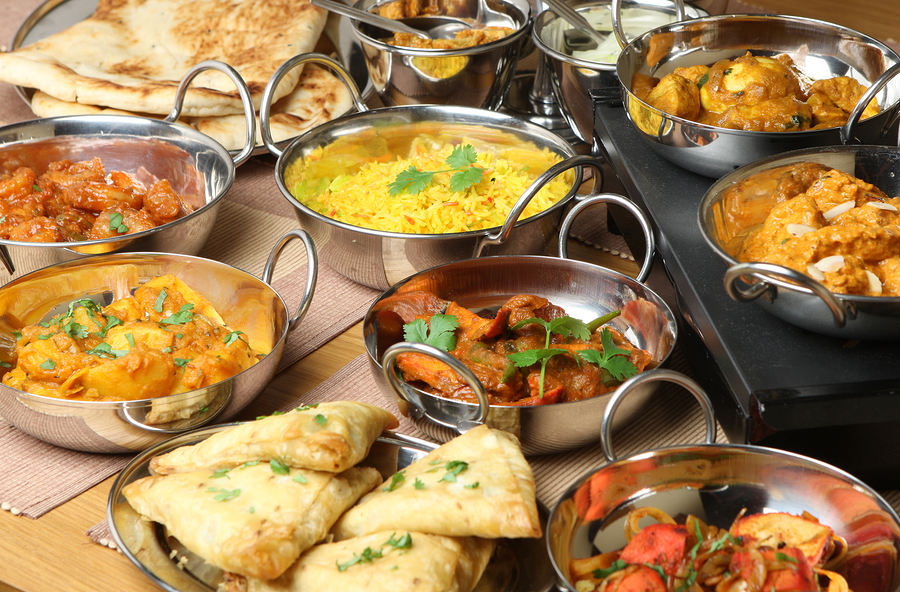 Before I plunged into writing cookbooks, I used to host secret suppers – dinner parties of a dozen strangers, for one evening a month, for an authentic, multicourse Indian meal.

One of the great joys for me, as the mastermind behind our shenanigans, was creating a menu that allowed the layers of flavor to develop over the course of the meal: from mild to moderate to spicy, from lightly sweet to decadent, creating a tiered ‘progressive’ dinner. We took a journey without ever leaving the venue. We indulged in authentic eats, giving guests time to leisurely enjoy each small course before proceeding to the next one. Very soon guests began to book their spots for the next event before the plates were cleared from that evening!

As part of our event, guests were invited to bring their own wines if they chose to – even though we often also served a few different wines to pair with the meal. I can’t tell you how many red wines made an appearance and stayed untouched through our many meals.

Most people choosing an Indian meal assume that red wines represent a staple pairing for flavor-rich and spicy dishes. It is a common assumption that just as one would pair a red wine with an Italian sauce-based dish, the pattern of pairing would apply to Indian cuisine. I beg to differ.

Wine and alcoholic beverages have long been part of India’s social scene. The Vedas, an ancient religious text, refers to a fermented drink made with rice and honey called ‘sura.’ Later texts chronicling the lives of local rulers include an alcoholic drink called ‘madhu,’ roughly translated as honey or nectar, reserved for aristocracy and others made with wheat, barley, and millet favored by the working classes. 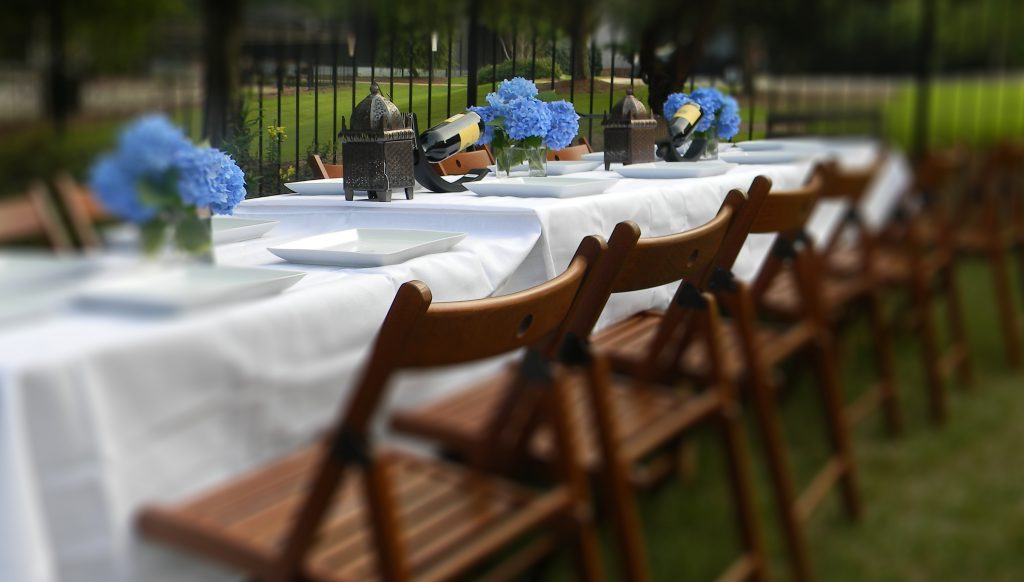 The Mughal, Portuguese, French and Dutch occupations created space for Brandy and Port to formally and commonly appear, as did fortified wines. Hindi and Urdu poets from these times, the thirteenth century onwards, refer to a place called ‘Madhushala,’ or the house of wine, a place where the enjoyment of wine-women-and-song occurred frequently. The colonial rule that spanned from the late 15th century through the mid-twentieth century also introduced other alcoholic beverages including Whiskey, Champagne, and red and white wines. And with each influence came its own culinary heritage.

With such a long-standing association to diverse alcoholic beverages and the rich multiple culinary influences of the region, pairing an entire cuisine with a single category of beverage – in this case, red wine, seems sacrilegious.

A well-made Indian dish is like an incredible opera with multiple layers of flavors, each treated with delicate care. Regional and cultural influences add the flair and nuances that only a true connoisseur recognizes, whereas dietary guidelines and sub-cuisines create variety and highlights. When the composition is perfected, it showcases the complex pairing of spices and main ingredients. Such dishes must be enjoyed not as a Broadway comedy, but in a manner that recognizes it operatic quality.

To appreciate Indian cuisine in the best possible way is to pair dishes with a drink or beverage that refreshes the palate with each sip. An ideal beverage does not overshadow the dish but compliments the many layers of spices, the method of preparation, and the quality and freshness of raw ingredients. A well-made dish will include a hint of a delicate spice to compliment the potency of another. And the paired beverage must do the same – highlight the notes of the dish without masking them.

Most people attempt to test Indian food at their neighborhood Indian restaurant; they often do not venture past saag-paneer (same as palak paneer), tandoori chicken, butter chicken (same as makhani chicken – my recipe is here), ‘maa-ki-daal’ or a daal made with whole black urad beans, a few varieties of naan and basmati rice, and the spicy pungent Indian pickles and colorful chutneys that grace most tables, just as you would find soy sauce at your favorite East Asian eatery. 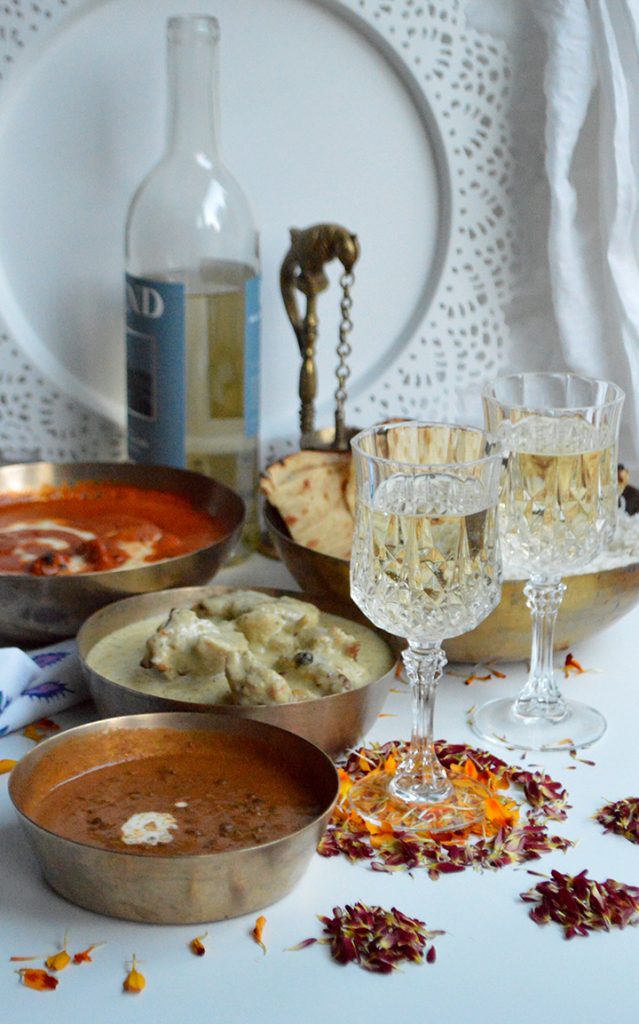 This popular selection of dishes includes a largely northern Indian fare, where entrees are rich, sauce-based dishes made with heavy cream and dairy. A well-made saag paneer is an earthy dish of leafy greens, typically spinach or mustard greens or a combination of both, and pairs prominently bitter flavors of the leaves with a creamy texture of paneer. With the exception of the smoky and spicy tandoori chicken, other entrees hold similar flavor profiles: each uses crushed tomatoes, garam masala, ginger and garlic, and heavy cream with varying degrees of cayenne pepper to offset the sweetness of the dish. The naans and rice represent the vehicles for enjoying the dishes and are either lightly flavored with ghee or whole roasted cumin and perhaps a few other spices.

Many strip-mall Indian restaurants serve their meals as a one-stop platter, where everything arrives on the same plate, like an Indian version of a Bibimbap bowl. This practice relates to providing the ‘wow-so-much-food’ factor, with ease of clean up, often directly related to the pay-grade of their back-of-the-house dishwasher. This is not the manner in which traditional Indian meals are served.

As a conventional dining principle, bread and rice are never consumed in the same morsel, or even course. There is often a bread course followed by a rice course, even though some parts of India follow it in the reverse pattern. Each bite includes one or at best, two selections from the entree, to give room to the flavors to develop.

A recent take-out meal from a local Indian restaurant included many of the popular Indian dishes. We skipped the saag paneer and tandoori chicken, and instead opted for a creamy ‘Afghani’ chicken cooked in a nut-based sauce, a makhani chicken and maa-ki-daal, with a side of basmati rice and an assortment of Lucha paratha (an unleavened, layered wheat bread) and naan (a leavened white flour bread). We paired the meal with a very simple Californian Pinot Grigio. The crisp fruity notes of the Pinot Grigio worked well to cut back some of the prominent, tomato-based flavors, and each sip readied the taste buds to enjoy more. It refreshed us from the creaminess of the Afghani chicken and left a clean finish for the next morsel. Even though we only enjoyed one wine, it paired well across both courses. 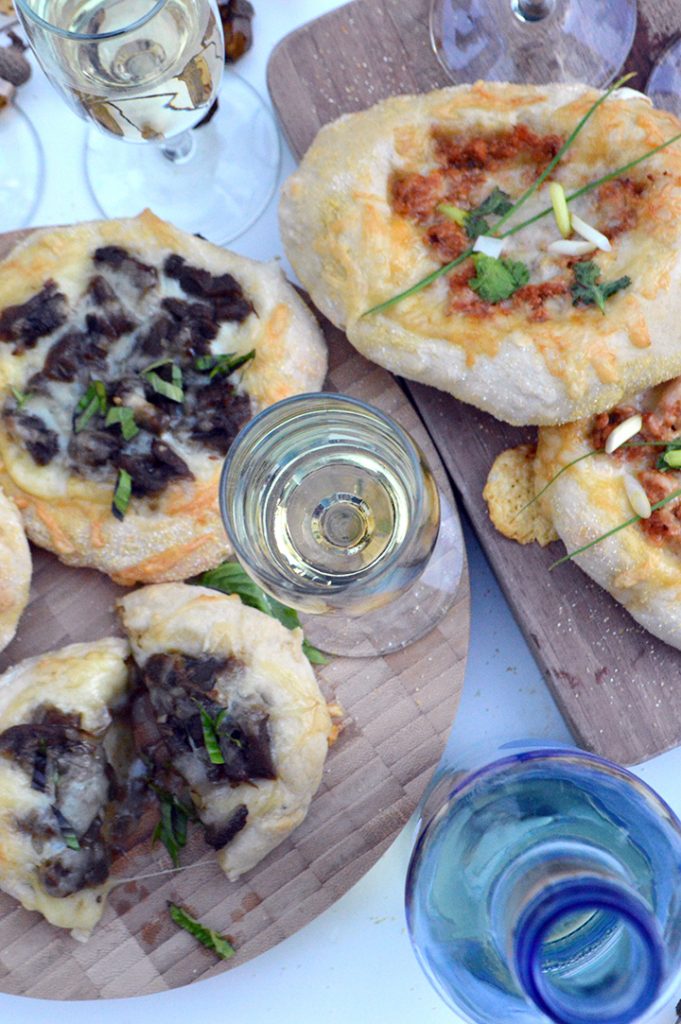 At another meal, we tried something different – two versions of an Indian-styled pizza. Using a standard pizza dough, I assembled two different personal pizzas: one topped with a spicy kheema (minced) chicken, and another with a moderately spiced, roasted eggplant spread, both with mozzarella cheese, lightly drizzled with olive oil. We had a variety of greens like scallions, garlic chives, basil and cilantro on hand for customized garnishes. The spicy kheema included the flavors of onions, a pinch of garam masala, ginger, garlic and tomatoes, with a dash of salt and a hint of cayenne pepper for heat. The roasted eggplant spread was simpler, cooked only with ginger, garlic and a dash of garam masala. Both toppings were made beforehand, to minimize cooking time.

On this occasion, my husband chose a Portuguese wine, a crisp Vinho Verde, to pair with the yeasty bread and the spicy meat topping. Although it is typically paired seafood, this wine helped highlight the finer flavors of the herbs and garnishes, all while complimenting the main ingredients: roasted eggplants and spicy minced chicken.

Across our two dinners, we tried two different white wines – Pinot Grigio being lighter than the Vinho Verde. Both included fruity notes and were crisp and tropical. We enjoyed the wine itself, but it did not numb the taste buds, or overpower our enjoyment of the dishes.

These were just two simple samples of popular Indian restaurant eats. We have explored other dishes in past suppers and more in upcoming ones. I hope that the next time you eat Indian food, you feel confident enough to try it with a crisp white wine, one that compliments the complex flavors of the cuisine, one that makes your meal even more enjoyable, in the company of loved ones, friends, and family. If all else fails, bring Champagne or sparkling wine to celebrate the dance of spices, the pairings of flavors, the finesse and romance of fine techniques embedded in the Indian cuisine, as you would if you were to attend one of my secret suppers. 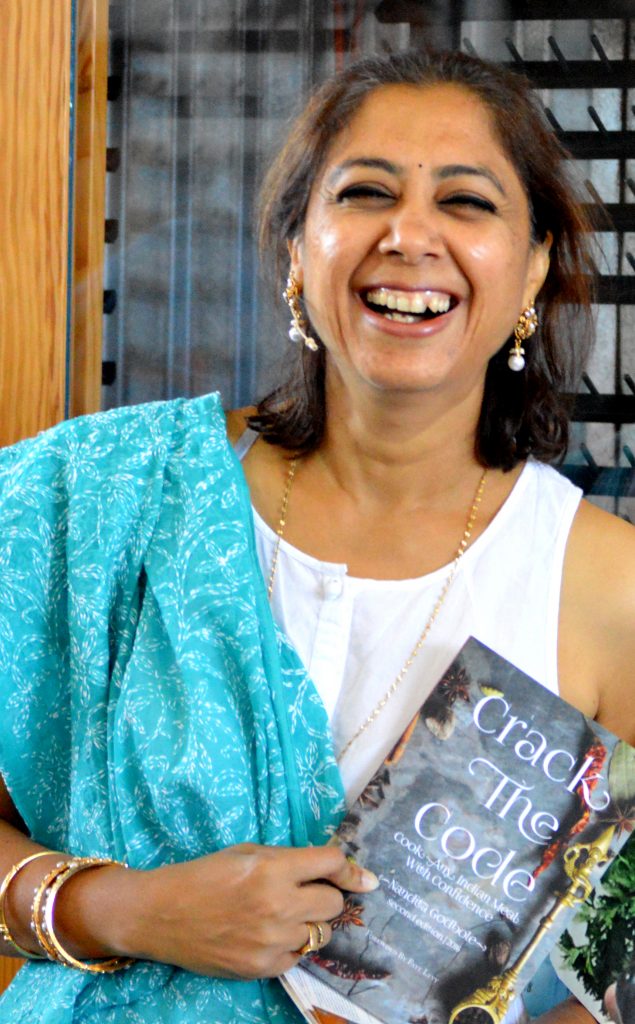 Nandita Godbole is an Atlanta-based freelancing food writer and an indie author of several cookbooks, whose readers reside in more than 30-countries globally. She most often writes about two of her favorite things: simple, flavorful, and holistic Indian food, and about family: the joys and complexities of delicate personal relationships. In the past 15 years, through her work, she shares the diverse culinary riches of India to uncover and rediscover intricate and unique layers of culture and identity. Nandita grew up in Bombay, in the city before it became Mumbai, India, which makes her easily nostalgic. Somewhere between her memories of her old home, her new home and kitchen, and her musings, she plays the roles of mom, chauffeur, chief do-it-all-er, and the absentminded gardener.