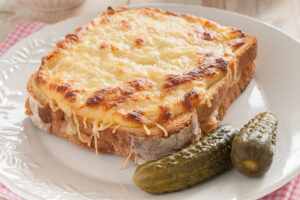 A croque-monsieur is the more luxurious and tres Francais knife-and-fork version of grilled cheese. Traditionally made only with ham and cheese, we’ve brought some domestic flair to this recipe by marrying it with Miami’s famous Cuban sandwich for a quick, easy dish that truly works at any time of day.

Over medium-high heat melt two tablespoons of butter in a medium saucepan, then whisk in flour to make a roux. Cook for thirty seconds, then stream in milk while whisking constantly. Reduce heat to medium-low and add half the cheese and whisk until melted. Add two tablespoon of mustard, paprika, and salt and pepper to taste. Set aside on your stove’s warming burner on the lowest heat setting.

Preheat a large ovenproof skillet over medium heat. Spread the remaining mustard on four slices of bread, then evenly top with ham, roast pork, pickle slices, and remaining cheese, then top with the rest of the bread. Melt half the butter in the skillet, making sure it evenly coats the bottom of the pan, then add the sandwiches and cook for three to four minutes until golden brown. Add the remaining butter to the pan and flip sandwiches. Cook for two to three minutes while preheating your broiler on high.

Once the sandwich bottoms are golden brown, top each with an equal amount of the cheese sauce. Place under the broiler for three to five minutes until brown and bubbly, then serve your croque-monsieur immediately and enjoy!