Pie in the Sky: 12 Criteria for Great Apple Pie

(Note: in November 2007 I conducted a tasting of scores of mail-order apple pies. The following is what I learned about judging.)

The Rustic-to-Elegant Continuum
Nothing divides the world of apple pie as cleanly as this factor. You can see it right away: the producer’s fantasy was either 1) I’m somebody’s Grandma making pie in the most rustic way imaginable and cooling it on the window ledge at the back of the farm kitchen; or 2) I’m a trained pastry chef making upscale apple pies for elegant dinner parties. You will see this dichotomy play out in many of the factors below. 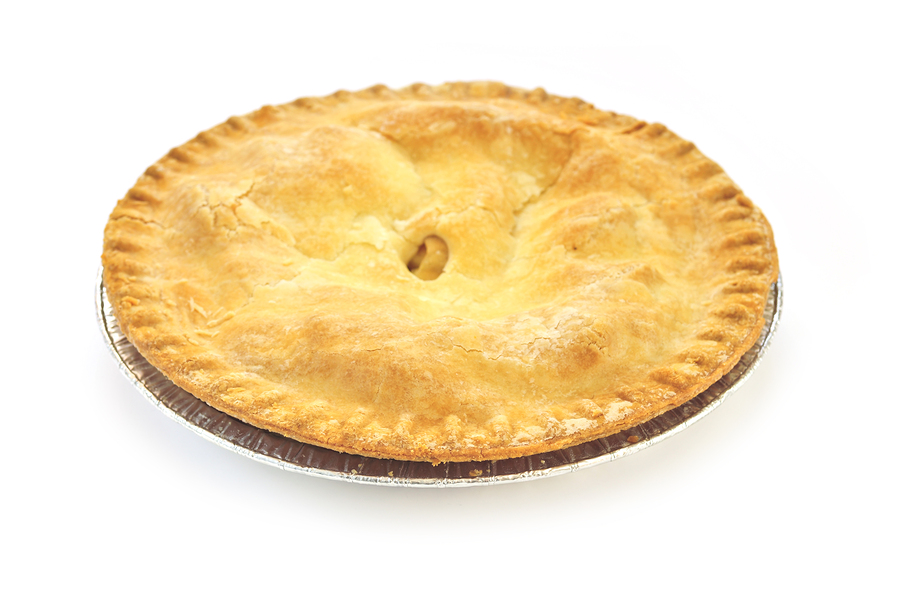 When you start analyzing pies, you see very soon that the “crust” actually has three discrete parts. Most obvious of all is the top crust, which is the preponderance of what you see when you take the pie out of the box.

Let’s look at the top-crust extremes first. If the pie is rustic, it will have a bumpy, wavy, uneven top crust. If it’s elegant, it will probably be smooth across the top, and maybe with light “scores” to create some kind of diamond pattern. Another dimension is the “look” of the dough itself: is it light in color? medium? dark? is it sandy-looking? cookie-like? sugary? dull? shiny (as with an egg wash)?

For me, all of these things serve as pre-indicators of the most important top-crust dimension: what is its texture like? Generally speaking, I hate dry. I hate hard. I like my top crust to be tender and moist. The best kind of apple pie of all, to me, has a flakiness in the crust, maybe the visible presence of layers. Multi-dimensionality in textures (like “flaky but with thin top crackle”) is also good.

Flavor counts as well, of course—but you see much more variation in textures among pies than you do among flavors. Most top crusts taste at least a little browned; the major differences reside in amounts of sugar and amounts of salt. For me, a good salty statement works beautifully alongside the sweet apples; I find that sweet crusts are redundant on top of the sweet apples.

Bottom Crust
The English apple pie, from which the American apple pie descended, usually had a top crust only; the apples sat in the pan with no crust below them. Carb-crazed Americans changed that, however, and became famous for the “double crust” apple pie—which features a pan lined with crust, then filled with apples, then topped with crust.

Very often, the bottom crust gets soggy as hell. If it’s a fairly thin crust, without much texture to begin with…it can practically disappear under the pie. It’s like having no bottom crust at all. Why bother? Of course, if the baker lines the pan with a too-thick bottom dough, the bottom crust might end up sludgy, chewy, unattractive.

The best bottom crusts are those that are there…unmistakably adding some texture, and some browned flavor (baking the crust “blind,” before apples are added, contributes to this). But bottom crusts should be there without getting in the way of the headlining fruit. A subtle, middle path. 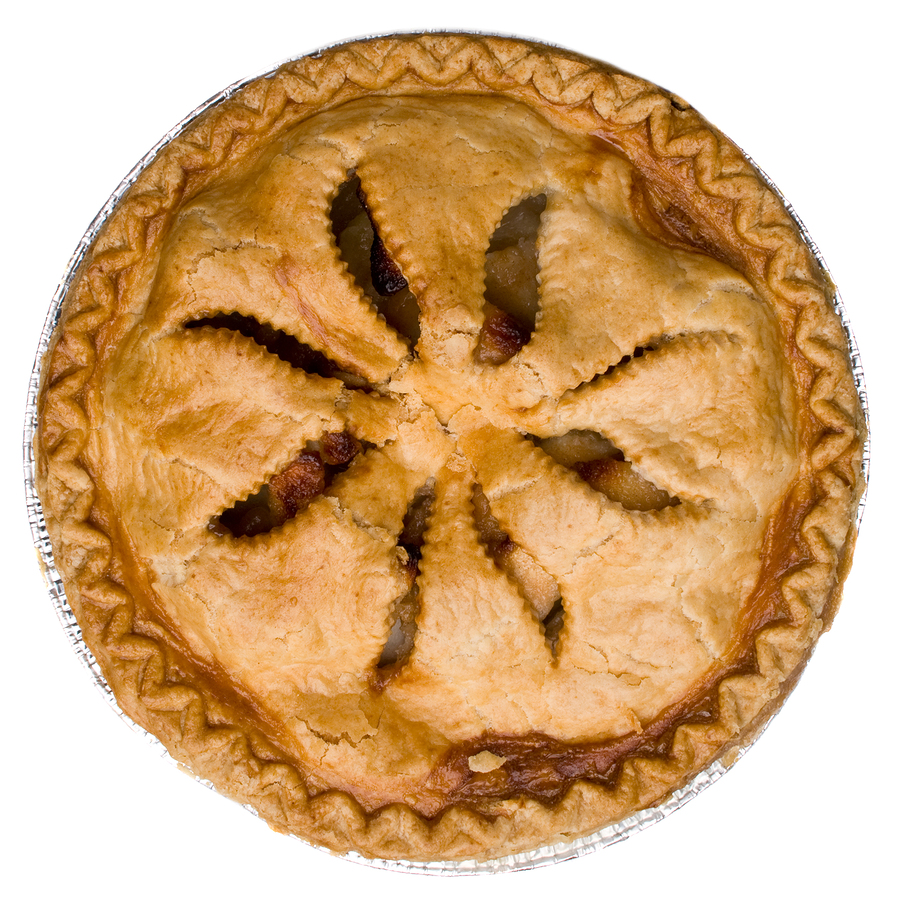 Around the perimeter of the pan, where the top crust meets the bottom crust, the “rim crust” is formed. The way it looks has much to do with the basic orientation of the pie.

This is the place where the elegance-oriented baker really gets to show his or her stuff: the rim can be crimped, pleated, dimpled, scored, pinched, etc., leading to a very regular, beautiful, in-control look. The other type of baker couldn’t care less; in extreme examples, the top crust is just thrown over the pie with no attempt at closure manipulation whatsoever! Then there are the in-betweeners—those that are crimped in some fashion, but not done very neatly or regularly.

For me…the visual impressions made by these choices matter little in the final judgment of a pie. What matters a lot more to me is how these choices affect the flavor and texture of the rim.

Now, I understand that when you’re eating a slice of apple pie, you’re not usually biting on the rim; most people start eating at the tip of the triangular slice, and work their way back. Sometimes they leave that back crust (or rim) over! But that’s not the way I work. To me, the rim can add tremendous flavor and texture. So, ideally, I like to blend into any single bite a mixture of apples, top crust, bottom crust…and rim!

Certainly it is the rim where the pie dough gets to show flavor at its brownest—because the rim is usually the darkest, most cooked part of the pie. A good-tasting rim adds a cookie-like taste to the pie, sometimes a distinct nuttiness. Once again, I prefer saltiness over sweetness.

Texture-wise, the rim can be all over the map. Many a pie goes down with its rim, if the rim is dry as dust (which they often are). But when the planets line up, the rim can be the best part of the pie: flaky, slightly crumbly, salty-sweet, a little oily, a little chewy, simultaneously crackling and tender, sometimes with complicated layers of wet, cooked dough slithering just under the crisp, pleated surface. 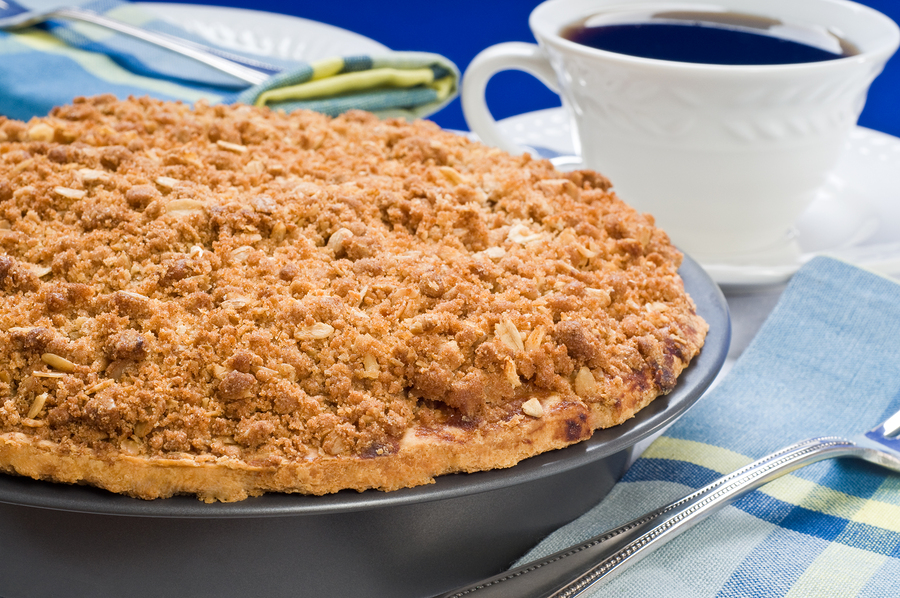 Of course, not all apple pies feature three discrete crusts: what’s very popular today is the non-traditional apple crumb pie, which has no top crust at all.

First of all…for me…a great apple crumb pie could never best a great traditional pie. I love the way an excellent traditional crust holds in the steamed apples…and I’ve never had a crumb topping that’s better than the traditional one.

However…it is true that a crumb topping is easier to hold for a while than a traditional topping…with less danger of dough melt-down on top. But then, of course, there’s the question of quality. Too many of the crumb-tops have a heaviness about them, the crumbs taking on a boulder-like quality. My preference is for light, small, frilly crumbs, with a little crackle-crunch to them.

Apple Size
Here’s a category in which I know for sure what I do not like: diced apples, or apples cut into tiny bits. Sure, you may retain apple flavor when you mince ’em small…but you are completely sacrificing the apple’s potential for interesting texture!!!

Beyond this mini-cut abomination, there are three good choices:

1) Thin slices of apple…which can make the prettiest apple pie of all! I love the layered effect, when they’re all sitting, strata-like.

2) Thicker apple crescents. Depending on the degree of cooking, these can lend a great chew. Probably the most reliable cut.

3) Really large apple pieces…like quarter-apples, or sixth-apples. I saw this in only one pie…and it was handled brilliantly! But I can imagine this treatment being really clunky.

Apple Volume
Related to size is the issue of volume…how stacked up are the apples? Is it a thin layer under the crust? Or is it a mile-high layer, with mile-high crust to match? Frankly, other than the entertainment value…I don’t see much good in a volumized apple pie! I’m not happy when the crusts are ratio-ed into non-existence! Moderation, for me, is the key: the apple part of an apple pie should be not too thin, not too thick, just right.

Texture
The other crucial factor in the discussion of apple dynamics is texture…mostly governed by the amount of cooking.

Once again, the middle path is best. Way too often, apples in apple pie are cooked to mush. I want to call these pies “Apple Sauce Pies,” instead of “Apple Pies.” The mistake at the other extreme is cooking them too little…so that they’re crunchy, almost raw.

If I had to err in one direction or the other, I’d err on the undercooked side. I like it when the apples hold their shape, and have some crunch to them. But after the initial crunch of your bite…your teeth should sink down into a tender center.

Apple Flavor
Of course, the amount of cooking also has a powerful impact on the flavor of your apple-pie apples.

Here, under-cooking is the big-time winner. Too much cooking, aside from turning the apples to mush, also gives them a stewed-apple flavor; there’s nothing wrong with this flavor, but it lacks vibrancy. The less you cook the apples, the more they retain some of the fresh-in-your-hand apple taste.

Spice Flavor
Of course, the apple taste of the apples is often reduced, or compromised, by another taste—that of “apple pie spices.” And this is as it should be…because apple pie wouldn’t taste right without at least a little touch of those holiday-like spices (cinnamon, clove, mace, etc.)

In this category, I prize subtlety. An intriguing whiff of cinnamon, allowing the apple to shine, does a lot more for me than a dust-bomb of McCormack’s dropped on top. I also prize freshness; some apple-pie spices taste musty, but some taste like fresher, higher-quality spices.

One other spice factor: when it comes to apples, I’m a cinnamon man. I don’t mind a complex array of subtle spices, as long as cinnamon predominates. But when you push into clove-dominant territory—or into a strong land of spices that seem almost Indian—it interferes with the natural goodness of the apple. Someday, someone’s gonna make a brilliant cinnamon-alternative apple pie—but I haven’t seen it yet!

Sweetness/Acidity of the Apples
Any apple, of course, has its own natural ratio of sugar and acidity. Any pie maker, of course, adjusts that ratio by sprinkling cut apples with sugar and lemon juice. What you end up with, in any apple pie, is a new ratio of sweetness-to-acidity.

Simply put…I’m happier when the acid is relatively high, and the sugar is relatively low. That gives the pie a wonderful, sprightly freshness. Too sweet, or not acidic enough, make for cloying, boring pies. 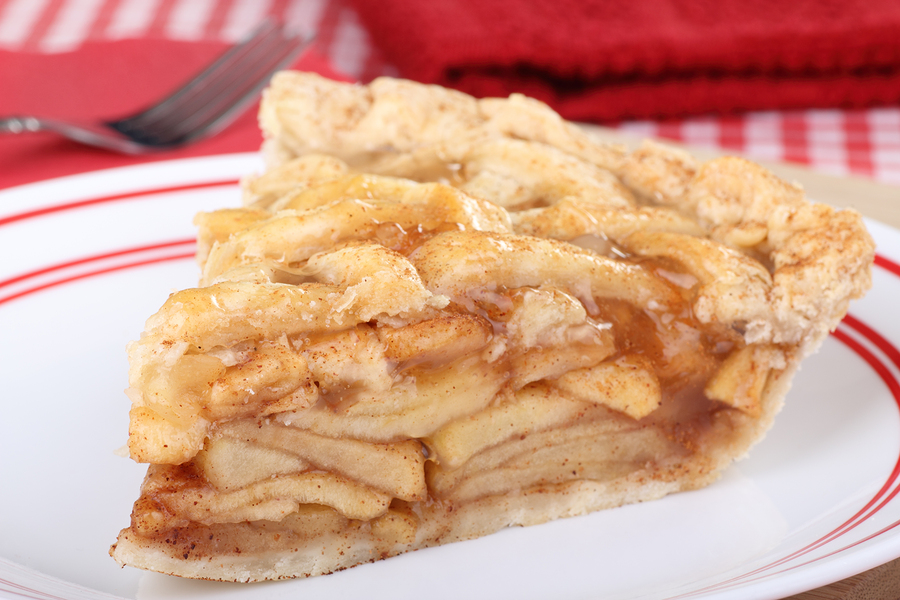 Very often, the sweetest part of the pie is not the crust, not even the apples…but the golden-brown ooze in which the apples may swim. Here’s what I don’t like: a really dark, really thick ooze, tons of it, really cloaking the apples, really delivering massive amounts of hyper-sweet taste.

The apples will never be dry, totally without ooze…but my preference, by far, is for lightly glossed apples, not sitting in a thick, abundant sauce. I have noticed as well that all of my ooze virtues are usually reinforced by an ooze that’s on the lighter side color-wise.

The Butter Factor
Lastly…butter. When you get down to it, there are five essential flavors in an apple pie: apple, sugar, lemon, spice (usually cinnamon), and cooked pastry. I say…the more you add of a sixth flavor, the better the pie will be. And that sixth flavor is…buttah!

Now, most commercial apple-pie bakers do not add butter, because it is expensive. Most of the ingredient lists I looked at had something other than butter in the mix: vegetable shortening, margarine, etc. Of course, you need some type of shortening to make the crust; you don’t necessarily need shortening to flavor the apples.

The best pies, to me, have at least some butter in the crust, and a wonderful buttery flavor in the apples as well. You can still have a great apple pie without that buttery glow—but said glow does put a great pie over the top!