A Rare Steack Tartare (note the French spelling of steak!)

Though I adore all things raw, I often shrink from ordering Steack Tartare in restaurants; somehow I can’t make the commitment while thinking about all the other greater, hotter things on offer.

Those days are over…for I’ve just had two steack tartares in France that rocked my world…and taught me something about how to treat this dish…and what to pray for as the waiter brings it.

The first tartare appeared at a super-cool restaurant just inside the Paris Peripherique, called Chai 33. Even cooler is its surroundings: a pedestrian area called Bercy Village, at the stalls of old-time wine-sellers, now converted into hip boutiques and restos. Chai 33 is a busy café with modern wine shop attached, and a breezy, beautifully-executed menu of brasserie specialties (like frisée aux lardons). 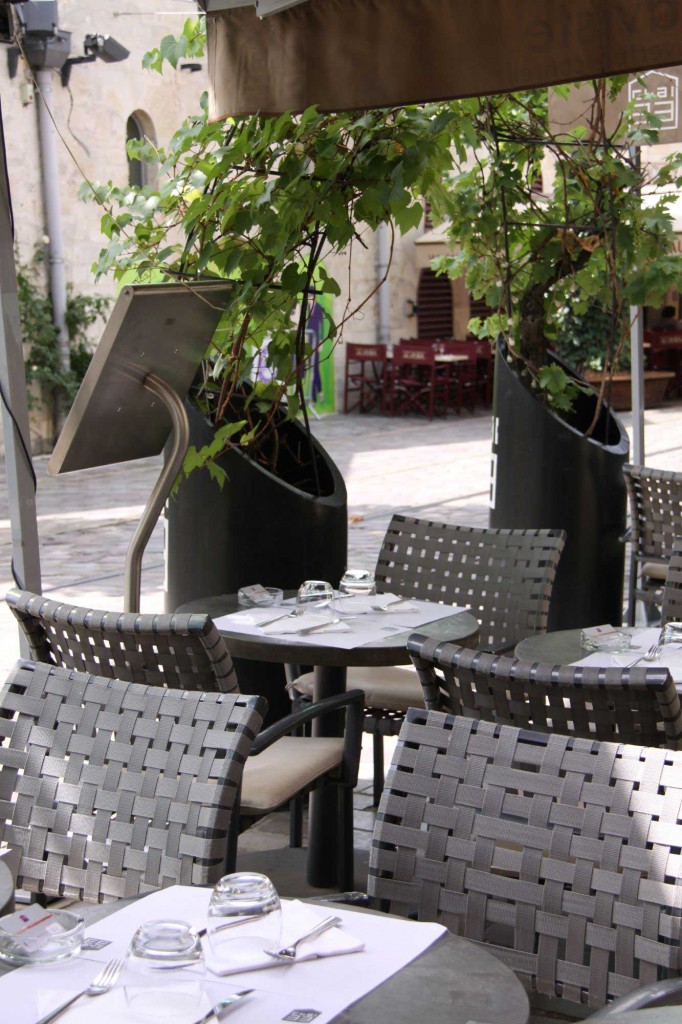 OK. Hot day. Felt the vibe…and went for the tartare. I’m glad I did. In the US, typically, Steak Tartare has a kind of non-wetness to it; it seems to carry about the same amount of moisture as ground meat at the supermarket. Not here; this tartare had a rich, sloppy wetness about it, slightly gooey, which created the sense of velvet, always aided by hand-chopped meat. 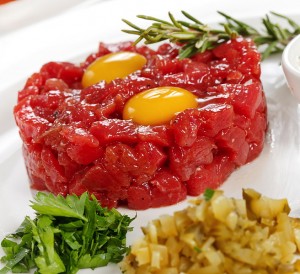 Wet-style tartare, in the French manner

Additionally, this tartare—in addition to the usual mustard, capers, shallots and sharp bottled condiments—carried a most appealing sweetness. I’m not sure what contributed that quality—but you can be sure I will be looking into droplets of Heinz Chili Sauce mixed into my next tartare.

However, the real epiphany occurred that very night, hundreds of miles away, at a simply fabulous restaurant (not yet on the foodie radar) in the hilltop town of Sancerre. The place is called Restaurant de la Tour, and the young—a name you will be reckoning with.

He swooned us with a dozen delectables, all with a healthy respect for tradition, plus creativity with tons of good sense. But his Steack Tartare was the masterpiece, for me. For starters, it had the velvety-wet thang in spades, plus the violence of the color purple, from excellent French beef. Perched on top of the carnality was a perfectly poached egg, with a violent orange yolk. And just off to the side was a quivering, perfectly sautéed piece of foie gras. 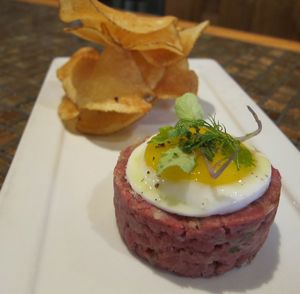 From Phoenix: American chefs are learning to slightly cook their tartare-topping eggs

So here’s what I learned at the restaurant tonight. If you’re accustomed to a raw egg on top of your tartare—by all means substitute a just-poached one! You get the same yellow ooze, but much more flavor. And, if you can partner tout cela with a good slice of just-cooked foie gras chaud…ooh la la! Now, I’m not usually a big cold-with-hot kind of guy—but when the dialectic invades the world of Steack Tartare, which is kind of a primally shocking world to begin with, the little frisson of thermal variation comes as a thoroughly appropriate aftershock!