THE SALAMI FAMILY
I am not generally thrilled by Italian-style salami in America. But it is the most famous type of salumi we have; it’s even a name that has passed into our vocabulary, even when we’re not talking about Italian products. “Salami” is actually the plural of “salame,” and the better producers of Italian-style meats in the U.S. usually use the word “salame.” No definition is needed, really; everyone knows what salami/salame is. But in the interests of completeness, a few things are worth pointing out. First of all, in Italy the word can refer to either dry-aged salami (as it usually does here), or to a fresh sausage (uncooked) or to a fresh sausage that has been pre-cooked. Moreover, in Italy there are hundreds of regional variations in meat content, seasoning, casing selection, aging technique, etc. In the U.S., “salami” (if we’re speaking of Italian-style) usually means a medium-sized dried sausage, made mostly from pork, mildly seasoned, the slices of which often measure about 3″ across. I have seen some American salami from producers that have smaller diameters—but salami is almost never as small in diameter as what is known as “dry sausage” (see Dry Sausage below). Salami typically has a fairly fine grind of meat and fat—as opposed to “sopressata,” which usually has a coarser grind (see Sopressata below). Though we don’t have the multitudinous regional variations here that they do in Italy, some broad regional names from Italy, and other names, have become attached to our salami products. Here are the major ones: 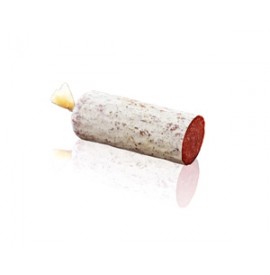 Genoa Salami is the name most often seen in the U.S. It refers to a salami in which the meat and fat are pretty finely ground, with only tiny flecks of fat visible in the pink/red background. Milano Salami is about the same, though sometimes finer still. This style is among my least favorite in the U.S., because the flavors are usually bland and commercial. 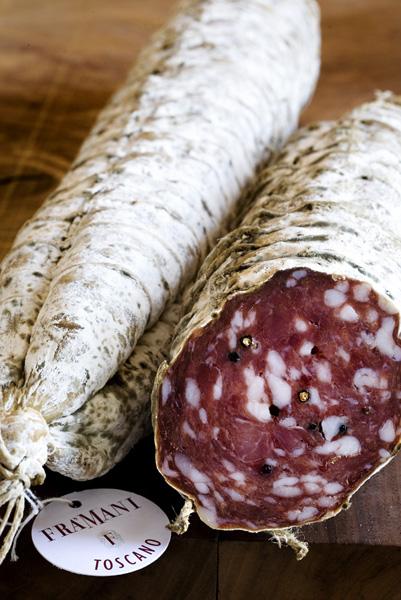 This is one of my favorite salamis in Italy, and the ones I’ve tasted here—though Toscano’s not too common in the U.S.—have been decent. What makes it distinctive is the size of the fat in this salami—wide chunks of it, almost as wide as the chunks in mortadella.  This usually leads to great porky flavor, and a wonderful chew. The lean part, typically, is not as coarsely cut as the fat. Toscano Salami usually has a fairly wide diameter, 3″ or so. 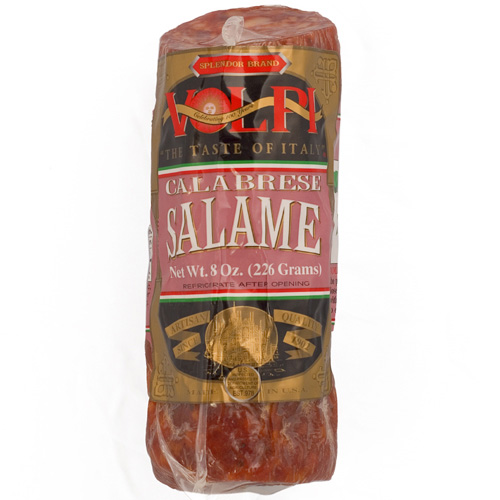 These regional names are often applied to American salamis—and can be applied to other pork products as well (sopressata, dry sausage, etc.) The code language is this: if it has those names on it, it’s probably spicy.

Salamini, Salametti
No regional designations here—but these diminutives indicate that you’ve got a smaller salami on your hands. Sometimes they’re even bite-size! “Cacciatori,” or “cacciatorini,” are other names for small salamis. 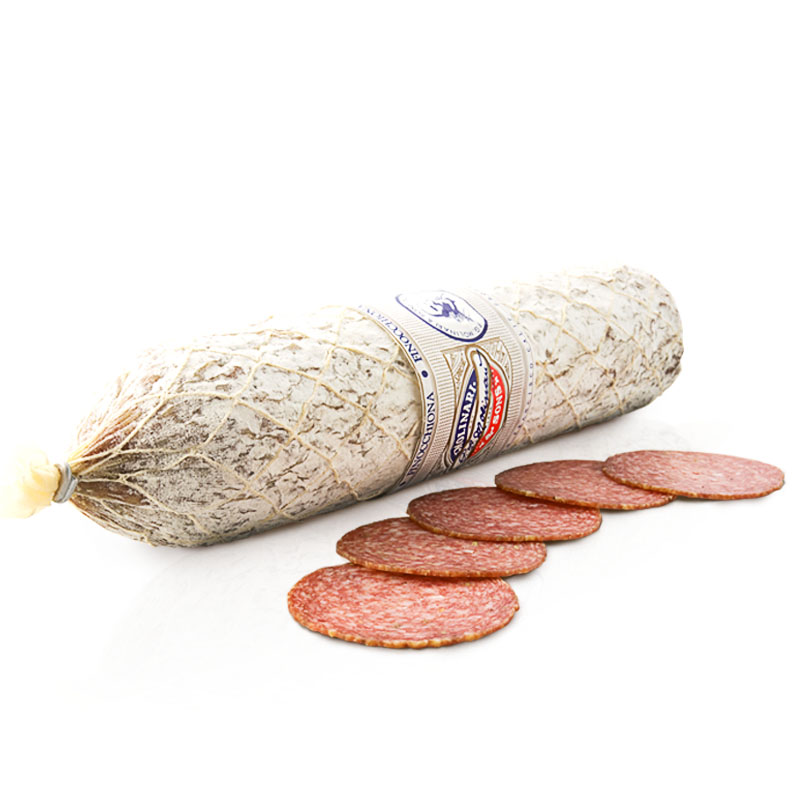 If producers in America are going to add spices and herbs to Italian cold cuts, it’s often salami to which they add it. Some salamis have the flavorings mixed in, and some are coated with those flavorings. Fennel is one of the most commonly used flavorings for salami; there’s even a type of salami called “finocchiona.” For some reason, fennel salamis usually taste a little more like curry powder than they do like fennel. 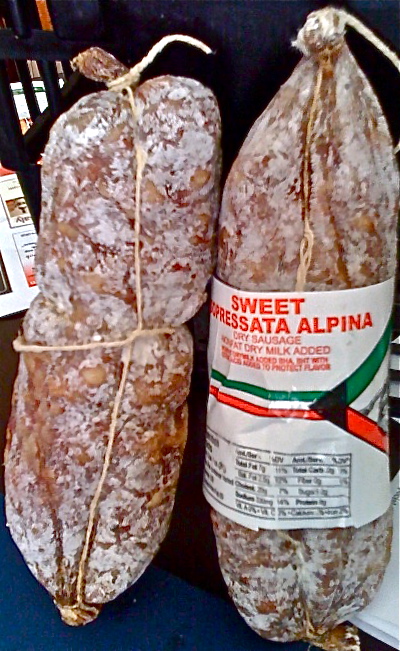 Happily, after the mediocrity of American-made salami, sopressata is one of our shining stars. The following explanation may be simplistic—but I really believe that producers think that customers who take the extra trouble to learn the word “sopressata” will also take the extra trouble to appreciate a finer product than typical salami. Unfortunately, it’s not that easy to define sopressata; most sources give you contradictory opinions on what the word means, what part of Italy it comes from, etc. After tasting scores of them recently, I can at least tell you how the word is used in America. It usually refers to a fat, round, dried sausage that is somewhere between 7″ and 10″ long, somewhere between 1½” and 3″ in diameter; slices of it are usually wider than slices of dry sausage, but not as wide as the widest slices of salami. The important thing is that sopressata is much more coarsely ground than salami, with big chunks of pork and fat visible. In practice, American sopressata almost always has more aged flavor than American-made salami. Some say that the word comes from a kind of pressing operation that was traditionally done on the sausage, but I’m not sure that most American producers do that. However, at artisanal shops you can find a very definitely pressed sopressata, sometimes right alongside the regular round one; it’s a flattened-out brick that they usually refer to as “flat sopressata.” Sopressata is available “sweet” or “hot,” both can be terrific.

DRY SAUSAGE
This category—another excellent one—is pretty clear: the home-made stuff you see hanging at Italian delis and top high-end groceries. It usually has no label, but is usually referred to verbally as “dry sausage.” Big commercial producers generally do not call any of their products “dry sausage” (though there are a few exceptions). Sometimes dry sausage is given the Italian name for sausage, “salciccia.” Dry sausage is usually narrow, narrower than either salami or sopressata; sticks of it—and they can range from 4″ to 12″ in length—are rarely more than 1¼” in diameter. It is this narrow diameter, I believe, that gives dry sausage some of the chewiest textures, and some of the most intense flavors, in salumi-dom. You will often see a white mold on the outside of dry sausage—great! This does nothing but add flavor (the flavors of mushrooms, truffles, brie rind, and sweaty feet come to mind!) Dry sausage, of course, is available in both sweet and hot forms. 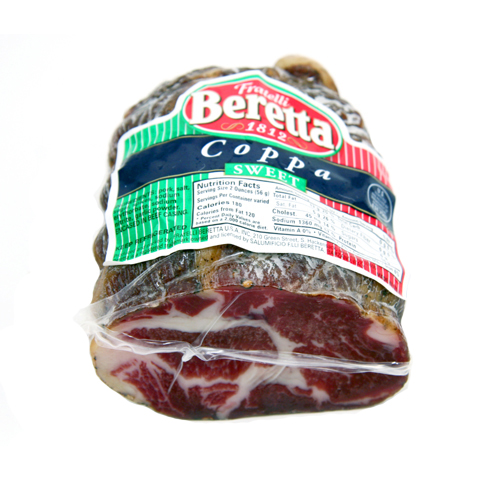 And now we come to what is probably my favorite single category of all in American salumi-making. I grew up eating “capocollo,” but what I ate pales in comparison to this awesome category. “Coppa,” which seems like an abbreviation of “capocollo,” is not—at least not in the way the words are used today. Coppa is described by John Mariani in The Dictionary of Italian Food and Drink as “cooked and pressed boneless pork neck, which is brined, then stuffed into a casing and air-dried for six months or more.” The examples I tried in my tasting were typically fat, irregular loaves, roughly 7 to 8″ in length, narrower at one end than the other, with center slices usually measuring 3″ or 3½” in diameter. Slices, typically, were an exciting purple, with a vein-like system of fat bands radiating throughout the dark meat. Some of the very greatest aged, complex tastes of all in my tasting were found in these extraordinary American coppas; even the commercial ones had an artisanal feel to them. They are available in sweet or hot forms.

CAPOCOLLO
“Coppa” and “capocolla” may be the same thing to some, but I can tell you, from tasting what’s out there, that the “capocollas” in general are many notches down from the “coppas.” Most products labeled today as “capocolla” seem very much like the products called “capocolla” in my youth (usually pronounced, in Italian-American dialect, gob-a-GOAL). This means basically rubbery, commercial rounds of ham, rimmed with a fiery band of red-orange spice. I suggest you look for “coppa,” not for “capocolla.” 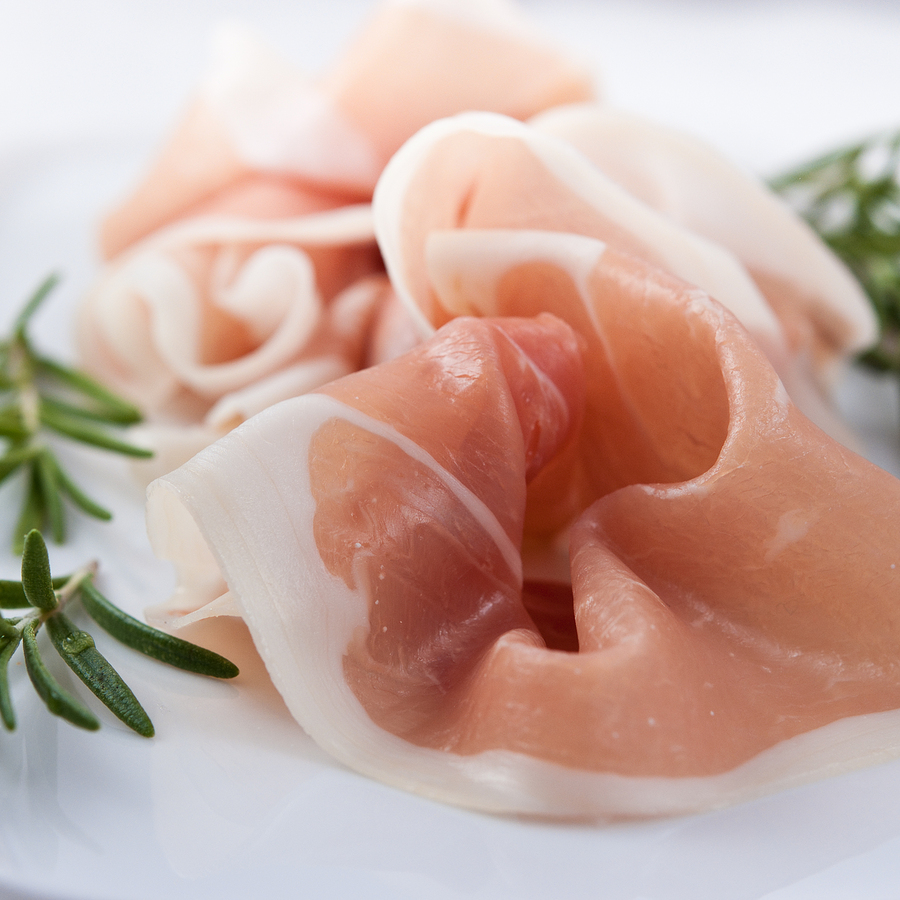 In Italy, there are two major types of prosciutto: prosciutto crudo and prosciutto cotto. What we normally think of as prosciutto is the former—raw (crudo) legs of pigs, salted and cured, hung for over a year until they turn velvety and flavorful. Don’t make an affetata platter without a paper-thin slice or two! The most famous prosciutto comes from Parma, but there is also excellent prosciutto from Friuli—called San Daniele. The other type of prosciutto is cooked or cotto prosciutto. 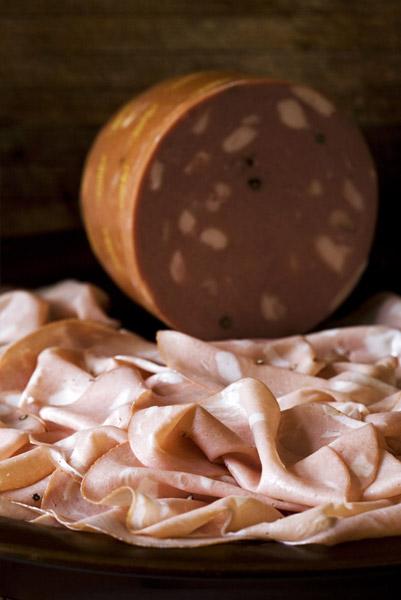 Most cold-cut aficionados are aware that what we call “bologna” in the U.S. (usually pronounced ba-LOAN-ee) is actually an attenuated, commercialized modern version of what they call “mortadella” in the Italian city of Bologna (pronounced bo-LOAN-ya). They are both emulsified sausages (like hot dogs), in which the fat and meat are puréed into a homogeneous pink mass; it is the genius of mortadella that the mass is broken up by huge chunks of white fat, sitting in the super-wide, 7″ slices; American bologna has no such interest in it. Furthermore, there are big texture differences between the two: mortadella can be terrifically silky, bologna is usually rubbery. Another big difference is flavor: good mortadella has the taste of pork about it, and interesting sub-layers of spice. “Baloney” tastes like, well baloney—very commercial, flat, bland. Until a few years ago, consumers in the U.S. could only get American-made mortadella here—which sometimes veers in a decidedly baloney-like direction. By the way…many mortadella freaks like to cut their mortadella into wide, very thin slices. Intriguingly, in Bologna, mortadella is often served as a pre-meal nibble…in big, 1″ cubes! It’s a whole lotta pork to chew through, but man is it delicious. Try it, if your cholesterol permits.