I am back in Porto, my fourth glorious visit in five years: half a decade of understanding the funky wackiness of northern Portuguese food, half a decade of giving myself over entirely to the unusual aesthetic of Port wine.

But, more important in many ways, it has been half a decade of watching one of the world’s greatest luxury hotels come into existence (I toured the construction site), and then into its own (I’ve now stayed three times). It is a place to which I will forever wish to return.

The gleaming lobby of The Yeatman Hotel

Since this birth occurred in a difficult time financially around the world, it’s possible that The Yeatman Hotel has not gotten the international attention it deserves. Once the cash flows again through the veins of luxury-travel types…I predict it’ll be difficult indeed to even get a reservation at this sumptuous palace of pleasure.

Here’s the detail that supplies the juice to this extraordinary operation: it is owned by one of the largest Port houses, Taylor Fladgate, and it is the passion of Taylor Fladgate’s Managing Director, the very English, very creative, Adrian Bridge. 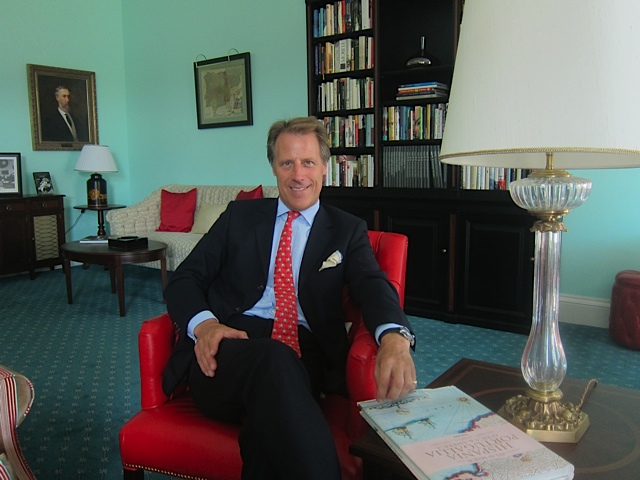 Adrian Bridge, CEO of Taylor Fladgate and The Yeatman Hotel

Because…for starters…what’s a Brit doing in Porto, making waves felt ’round the world?

The English have been drinking wine for a very long time…mostly, in earlier ages, French wine. But when 17th-century wars between England and France cut off the supply of Bordeaux to England, the resourceful Brits started looking for other options. They found Portugal. They liked the rich, dry reds being made in the Douro. They put their money where their palates were, signing the Methuen Treaty of 1703—which allowed Portuguese wines into England with the lowest tariffs of all. The love affair had begun.

The next chapter in the story concerns the wine itself. The English felt that fortifying the wine—adding a little alcohol to it, which also keeps the grape sugar high—made it easier to ship the wine in top condition. They also came to believe it made the wine better. And thus…Port was born. Almost from the beginning, the Port producers in the Douro Valley set up buildings, or “lodges,” in the city of Porto, where barrels of wine could be received from the Douro Valley via ships, or barcas, on the Douro River, and stored for future shipments to England and other places. As the hub of these new lodges, they selected the village of Vila Nova de Gaia—essentially part of Porto, but directly across the river from it.

English entrepreneurs flocked to the Douro Valley and Porto, to set up operations…and that’s why, to this day, many of the big Port names are English, with wineries owned by the English. There are Portuguese-owned houses as well (Ramos-Pinto, Ferreira, etc.)—but the English names are even better known.

Such an English owner is Taylor Fladgate (known in the U.S. only by the name “Taylor”), a house which has been run for centuries by Taylors, Fladgates, and Yeatmans. 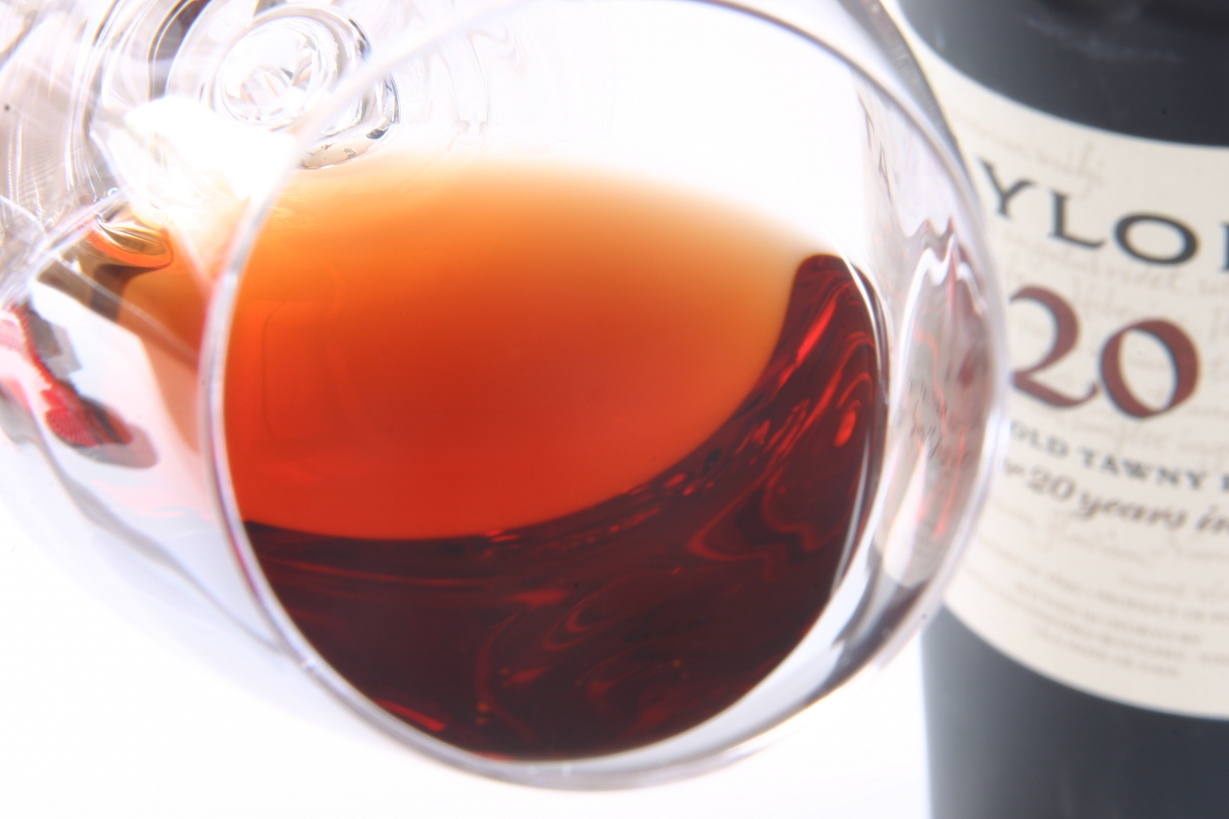 Taylor Fladgate had been managed for decades in the 20th century by one of the grand old men of Port, Alistair Robertson—who, along with raising many a bottle of Port, also raised a daughter named Natasha, now Taylor Fladgate’s chief winemaker. In 1989, Natasha married a dynamic young Londoner named Adrian Bridge—who, in addition to his labors in London’s banking community, also had spent his adult life carrying on a very British love affair with Port wine.

Lo and behold, the new blood in the family, in 1994, became the new Managing Director of Taylor Fladgate. It was a brilliant hire; Taylor Fladgate today is making world-class wine…AND changing the landscape of the Port region by running what is certainly the greatest hotel destination for travellers in northern Portugal. It took over 60 million dollars to build it—some of it from the Portuguese government, but most of it from Taylor Fladgate.

The Yeatman Hotel is set on seven acres of private landscaped gardens, on a steep hillside arching upward in Vila Nova de Gaia…towering over the terra cotta roofs of the old Port lodges. The 82 rooms and suites are spacious, modern, sun-drenched, splashed with bold color—and all have large miraculous terraces overlooking the Douro River, with fabulous views across the river to the Porto side of town. Every room is filled with a vision of the massive, girded-iron 19th-century bridge Luis I, which today carries foot traffic, cars and trains back and forth across the river. One returns to one’s terrace again and again, wishing anew to touch the living postcard outside. 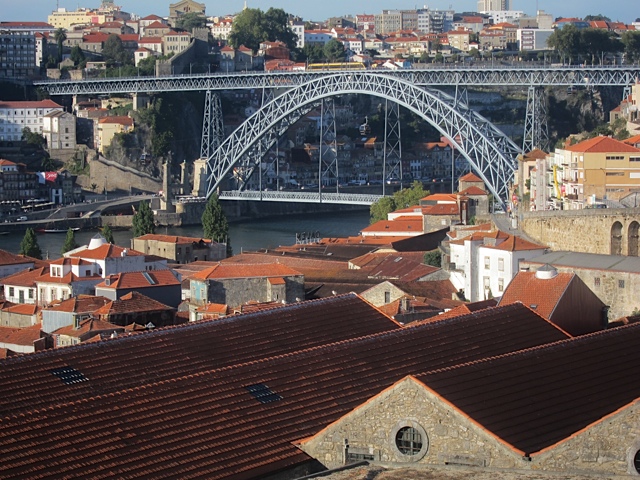 The bridge and city of Porto, viewed from a terrace 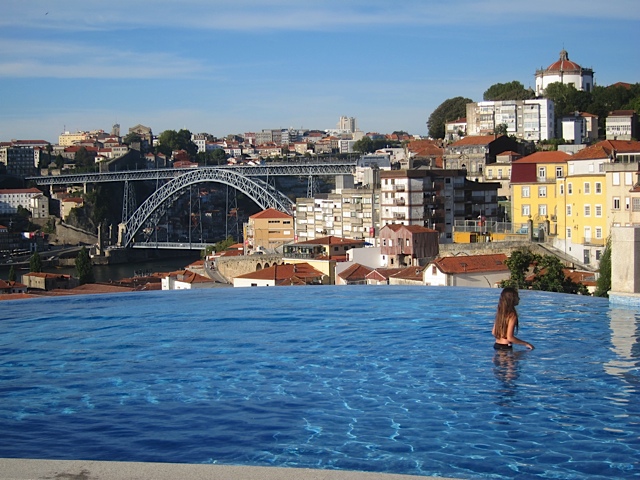 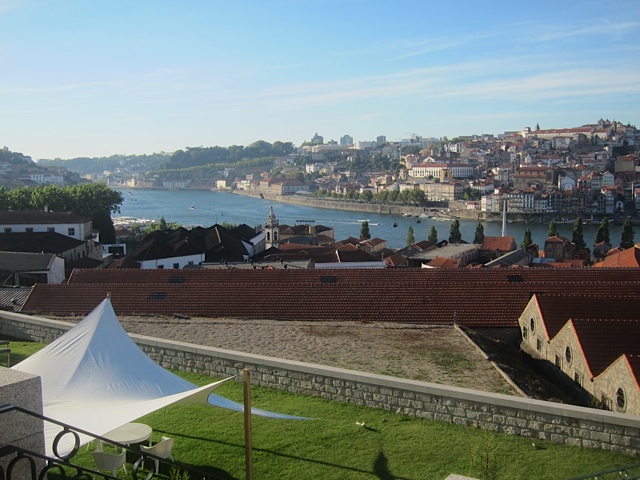 It all comes together in Taylor Fladgate’s Managing Director, Adrian Bridge, who has been a veritable micro-manager at The Yeatman; despite carrying on one of the world’s great wine businesses, he has also spent the last ten years steeped in Yeatman details, making the hotel feel like one massive, coordinated work of art. He’s had a firm hand in almost every area of the operation—from design choices in the rooms (most have walls of varying colors for maximum emotional affect, an Adrian thing), to museum-quality presentation of maps and artifacts down many a long hallway, to the 11 boldly decorated conference rooms… 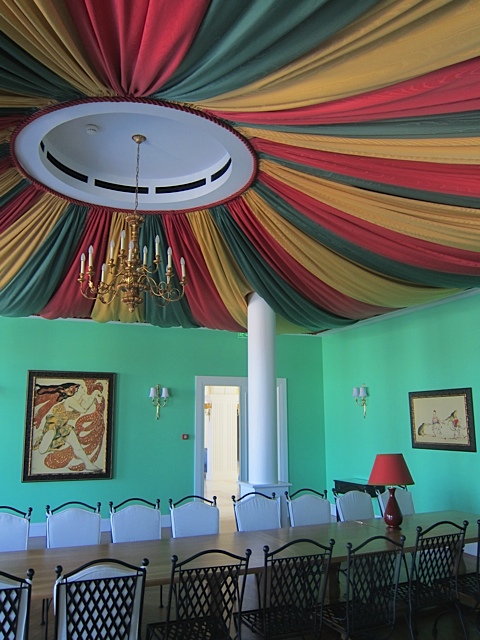 One of the 11 conference rooms

…to the gorgeous displays of local children’s art in the form of interpretations of the iconic local rooster, to the huge, oasis-like spa with its wine therapy program.

Speaking of wine, you will find no hotel in the world so connected with the stuff. But it’s not just the wines of Taylor Fladgate that are on offer. To Adrian, a rising tide lifts all barcas; all of the major Port wineries are represented here—to the extent of the hotel having specific rooms and suites named after competitors’ wines. And in the hotel’s cave—superintended by a sommelier, Beatriz Machado, who is not the sommelier of the restaurant, simply the 24/7 caretake of the hotel’s wines—you can find vast treasures from the Douro and all over Portugal, to the tune of 20,000 bottles plus.

Rest assured that there are other sommeliers working the restaurants—particularly the very beautiful main restaurant, which, in Spring 2012, was awarded a Michelin star. 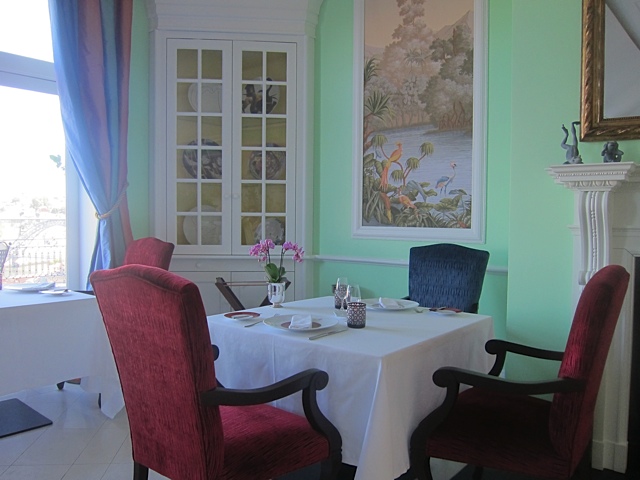 The one-star Michelin restaurant at The Yeatman Hotel by day

The chef, Ricardo Costa, had already attracted a star at Casa da Calçada, a country inn about 40 miles away in Amarante. He is from northern Portugal and, at both restaurants, has created a high standard of international techniques grafted onto local ingredients. But because he doesn’t usually stray into Asian territory, his food seems very much of its place. Here are a few photos from this Saturday night’s meal: 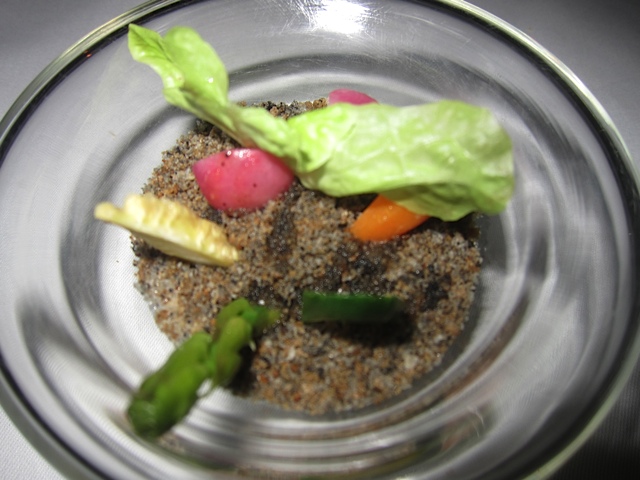 Cauliflower cream with mushroom powder and “an edible garden” 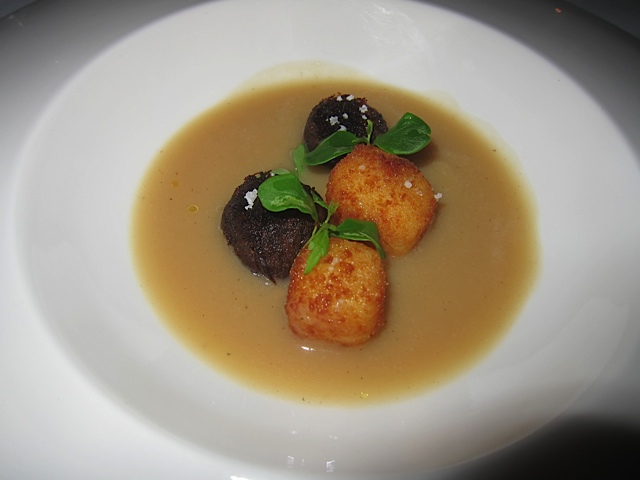 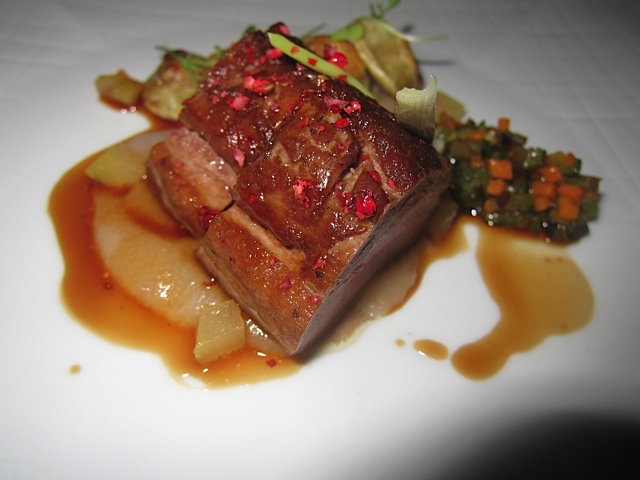 The main reason he came, says Costa…was that ubiquitous guy Adrian Bridge, who lured Costa to a meal in the dining room, knowing that the most spectacular views of all can be had on the dining room’s terrace, just about 8PM on a summer night. Here’s a few of those views from last Saturday night: 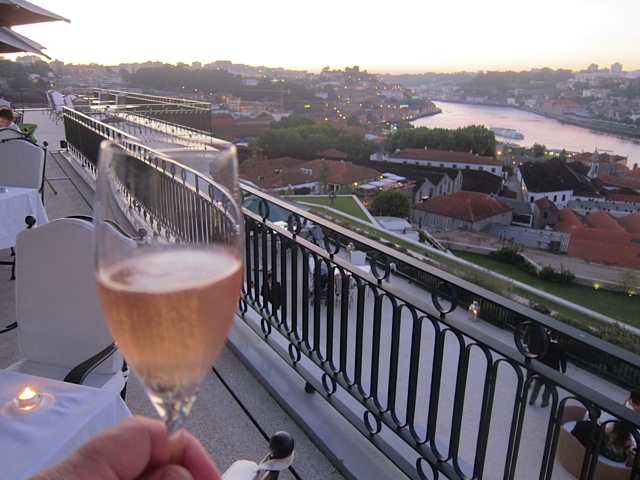 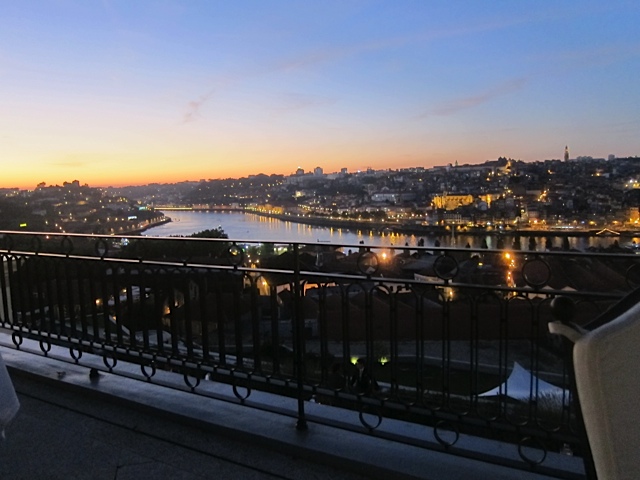 The magnificence of the Douro under dinner in Porto 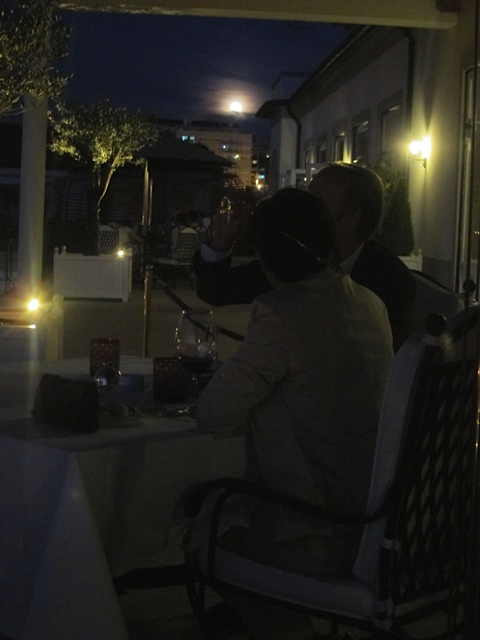 In a world of great restaurant views, this is one of the most thrilling available. Costa thought so too, and immediately moved his pots and pans over.

At the end of the day, at The Yeatman, there’s always the wines upon which this edifice was built. Taylor Fladgate owns the brands Fonseca (acquired in 1943) and Croft (acquired in 2002), as well as Taylor; each house has a slightly different style, and it is fascinating to taste your way through all of the lines. This can be done in many ways…among them a visit to the tasting rooms of the Port lodges that surround The Yeatman. 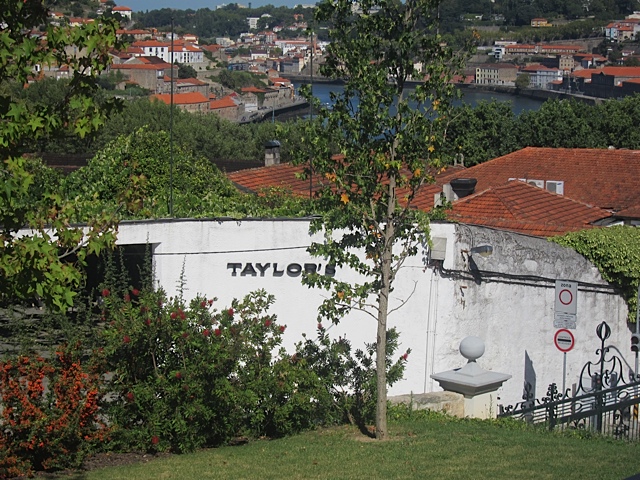 The Taylor lodge right next to the hotel gates, overlooking the Douro

Who’s that tasting in the corner? Why it’s Adrian Bridge…making his diurnal rounds! Not really…but he may as well be.

I had the wonderful opportunity recently at this lodge to taste through many of the wines in current release by Taylor…and by Taylor’s two sister houses, Fonseca and Croft .In case you can’t make it to The Yeatman right away, here are a few of my favorite wines in the tasting:

Fonseca
This house has a dark, decadent, round, rich and voluptuous style. I flipped over the 40-year-old Tawny Port. Slightly darker than the Taylor 40. Beautiful old nose of treacle, butterscotch, celery seed. Very complex.

Croft
Notable for its jammy, fruit-driven flavors (I didn’t try it this time around, but the 2003 Croft Vintage Port is one of the greatest young Ports I’ve ever tasted). The knockout for me in this tasting was the 2008 Quinta da Roeda. Opaque purple. Citrus and baked cookies on Port-y nose. Concentrated, though slightly hollow in the middle. Very expressive for a young Vintage Port.

Taylor
More austere in style: richness but with elegance. In this tasting, I loved the relatively inexpensive First Estate—a basic Ruby with a wild nose of grapefruit and spiced candy.