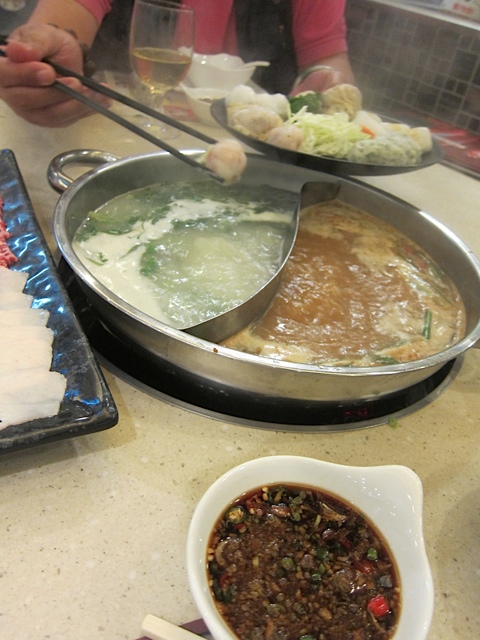 At table, dropping a dumpling into a Cantonese hot pot

On my March trip to the great eating city of Hong Kong, one of the most delicious themes that emerged was restaurants devoted to different kinds of “pots”…

Hot pots and clay pots, to be precise.

Hot pots first. I have a pretty long familiarity with the Chinese hot pot concept. The origins actually stretch back 1,000 years to Mongolia, food historians tell us, with beef, mutton and horse in bite-size pieces being cooked last-minute in steaming pots. I don’t remember those! However, the concept was alive in New York, in the 1970s, with lots of adventurous food writers turning us on to the “Mongolian Hot Pot.” Say “hot pot” to a foodie in 1980, and the response would be “ah…Mongolian hot pot!” But Mongolia doesn’t dominate the hot pot imagination any longer.

The important thing about the “hot pot,” as it has evolved…is the communal nature of it; a group of diners (the more the merrier!), are served a steaming, low-sided tureen of broth, into which they dip a hopefully endless array of meats, fish, vegetables, etc. These are always served with a plethora of condiments (soy sauce, fish sauce, XO sauce, chili sauce, sesame oil, etc.) that you can mix in your own dipping bowl to make your personalized dipping sauce.

Cut to contemporary times…where China has evolved all kinds of regional hot pots! One of the most popular in China is the Chongquing hot pot, with a spicy broth. (We in the U.S. call it “Sichuan hot pot,” and it is the trendiest of all right now, often requiring food treks to Chinese neighborhoods in big American cities).

But there’s another biggie in China (I need to explore its presence in America!). To be frank…though I’ve been to Hong Kong five times…I didn’t know before that “Cantonese hot pot” was such a big deal in this part of China…or even that it existed!

What is it? According to what I tasted, it’s not terribly different from most other hot pots. Sources say that in Canton raw egg is sometimes included for dipping, though I didn’t see it. Sources also say that in Hong Kong it’s a huge social event…I did see that…but I’d be surprised if hot pot eating all over China did not include a significant social dimension!

What I saw especially, in Cantonese hot pot, in Hong Kong, was quality…big-city quality!

At the amazing Cantonese hot pot restaurant I went to in Hong Kong, Woo Cow Hot Pot, you were given a choice of possible broths as your base, many of them esoteric—some of them hot (as you’d have in Chongquing hot pot), some of them mild, as you’d expect in Canton (like the delicious preserved egg, water chestnut and coriander base at Woo Cow). All modern hot pot restaurants that I know feature a special divided pot that allows you to have one kind of broth base on the left, and another kind on the right…if you choose to.

Preserved egg, water chestnut and coriander base on the left, spicy beef base on the right at Woo Cow 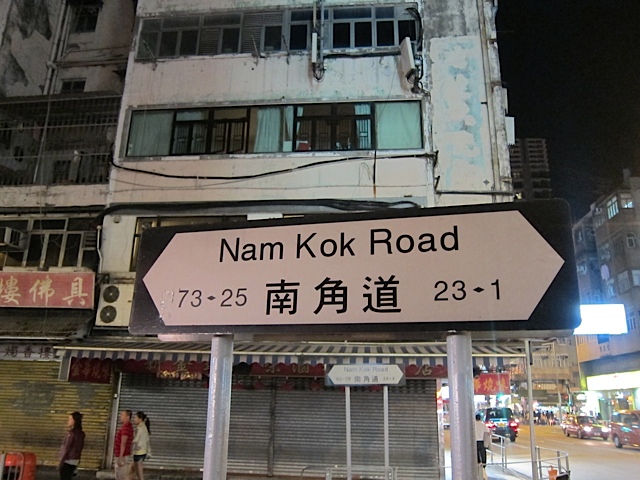 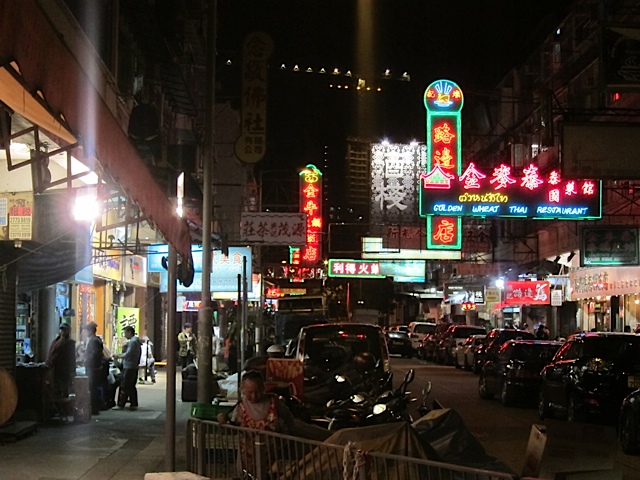 Tell your taxi driver: this is where you want to go for Cantonese hot pot

In about the middle of the street lies Woo Cow Hot Pot. In case the English sign isn’t up, ye shall know it by this logo: 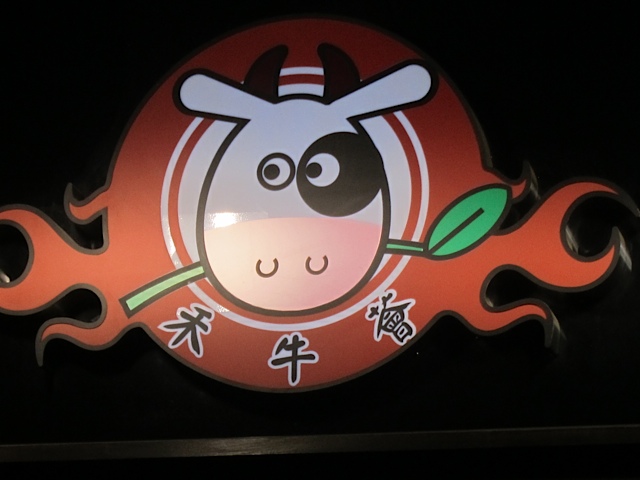 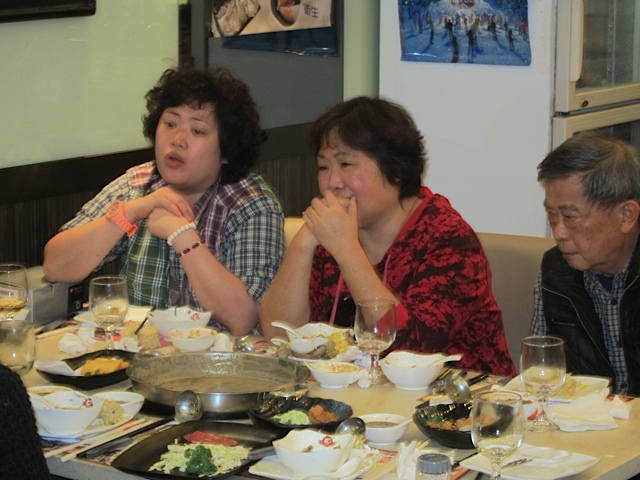 It’s rather bright and modern, but don’t let that scare you. The food’s the thing. I was overwhelmed by the number of possible meats, fish, veg, dumplings, etc. that you could order off the menu for dipping into the hot pot and subsequent quick cooking at the table.

Some of the dipster choices at Woo Cow Hot Pot

So I arranged a price with the owner (around $40 a person)…and just let him bring platter after platter until I died. I almost did. One very savvy hot pot person who accompanied me said “It always takes me a day of fasting to recover from a good hot pot!” The problem is compounded at a place like this, where everything is so outstanding that crying “uncle!” is simply not an option.

Most platters that you order for dipping/cooking come with multiple ingredients, side-by-side. One of our early platters sold me completely. It included an array of brilliant dim-sum-like items, including one of the restaurant’s rare forays into “modern-creative”—a ball of lightly cooked shrimp enclosing a heart of foie gras! It was off-the-charts delicious! 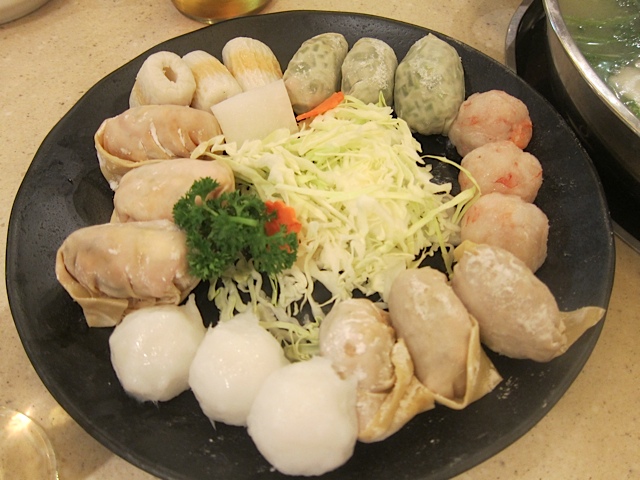 The opening salvo of dumplings, with the shrimp-and-foie-gras balls at 2-3 o’clock (they’re flecked with pinkish-red) 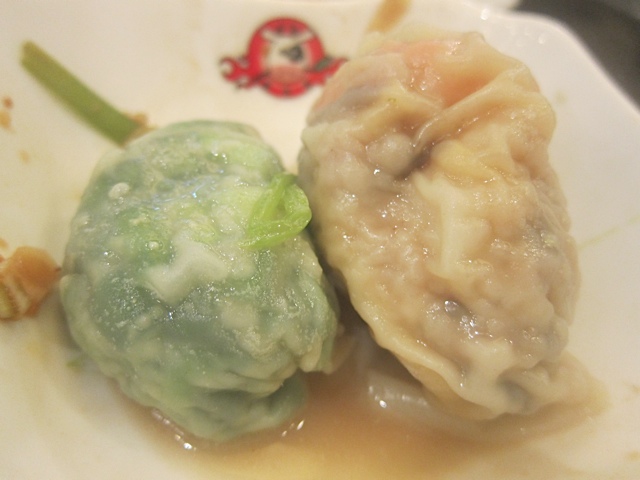 Two great dumplings after their baths in the hot pot

Next up: an array of incredible shellfish items for dipping, one-by one. As you can see, at Woo Cow they’re ready for tourists: 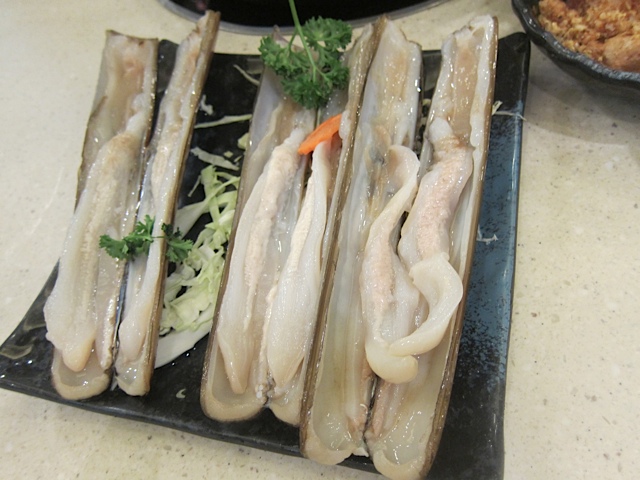 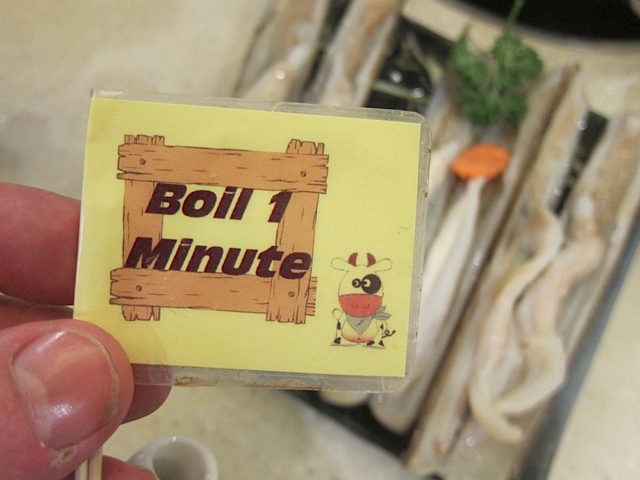 Next came a more esoteric assortment of Hong-Kong-type food. On this plate, the shrimp-stuffed mushrooms were the hit. 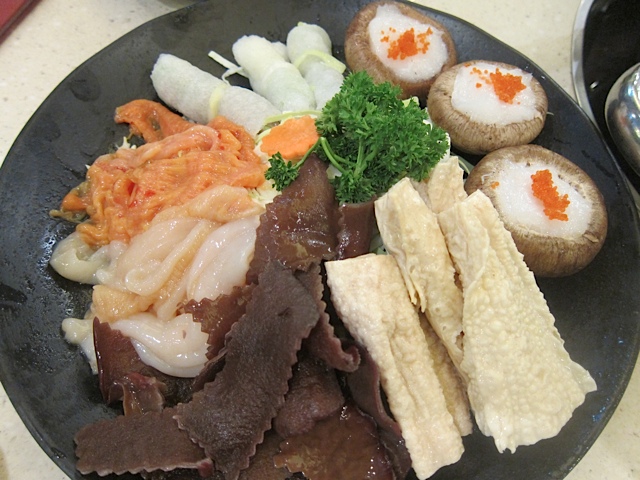 It’s organ time! Tripe, liver, and a few other unmentionables are unbelievably delicious in the spicy beef broth. 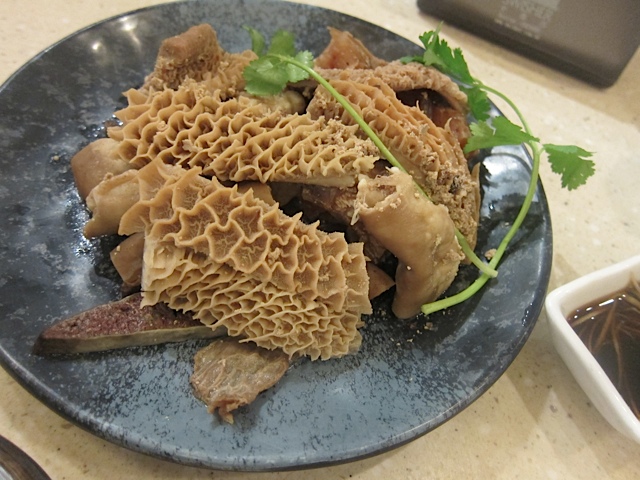 Frankly, there were many more mouth explosions along the way. But the one platter you cannot leave out, if you go—and the reason for the restaurant’s name—is the raw sliced beef, numerous cuts, which you get to cook to your preferred degree of doneness (that’s about a 20-second dip for me!). 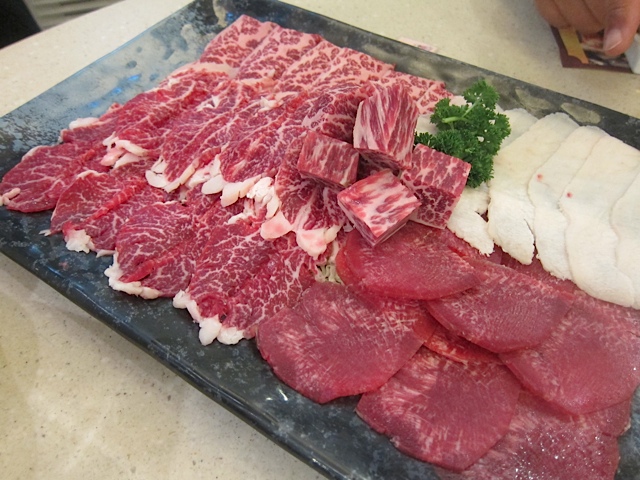 Not since sukiyaki in Tokyo have I had dippin’ beef this good. The marbling and tenderness are insane. The one on the north end of the photo literally melted in my mouth…metaphors stay home!

And…yes…it was not so easy to start eating again at lunch the next day.

I have always been a fan of what you might call “the Chinese casserole”…something braised in a clay pot, cooked longer than and differently from a stir-fry. The sex is in the cooking liquid, which usually becomes a kind of stew-y sauce. I always seek out dishes like these in New York’s Chinatowns…but I didn’t know that the “clay pot” restaurant was such a fixation in Hong Kong!

I was taken to a few clay-pot joints…and, far and away…my favorite was Kwan Kee, in the Western District of Hong Kong Island. 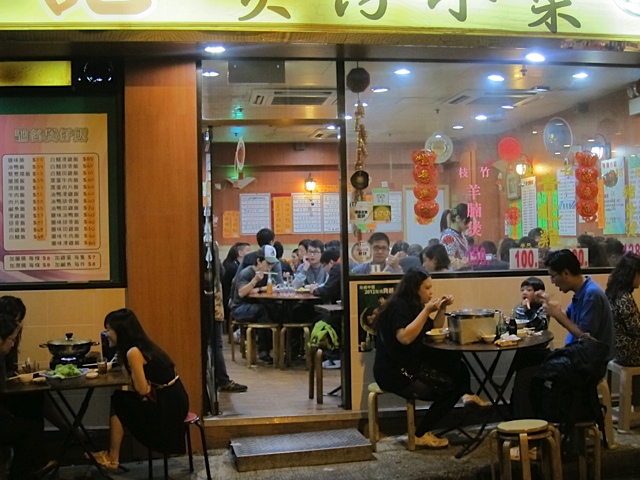 The unprepossessing exterior of Kwang Kee

…with the most humble-looking wood-burning stove carrying the pots… 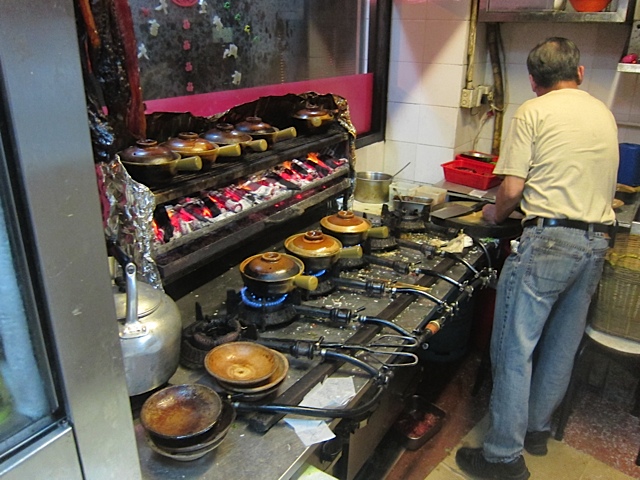 Stove at Kwan Kee, with the keeper of the flame

…but the place is jammed, day and night, inside and outside, mostly with local residents.

It hasn’t made the guide books, thank God.

Still, it was difficult to score a reservation. And, once we got there (four people pushed into a cramped table in the corner)…it was impossible to change tables!

Made no difference whatsoever. Kwan Kee became one of my top restaurant experiences of the week…because the food is so damned good!

Interestingly, at a clay-pot restaurant…there are two clay-pot categories. And then…there are lots of dishes to supplement the menu that are not cooked in clay pots!

The first clay-pot category is braised food, no rice in the pot. We had a sublime stew translated as Braised Chicken and Taro… 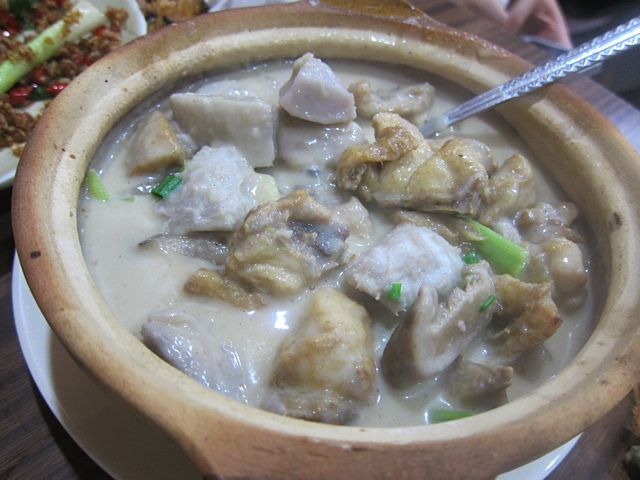 Braised Chicken and Taro in the claypot at Kwan Kee

…which featured juicy, tender chicken, and a rich creamy-dreamy sauce, oozing with the subtle taste of taro. My Cantonese ain’t great—but I stumbled my way through a few questions, and found out that milk and cornstarch are key players in the sauce. 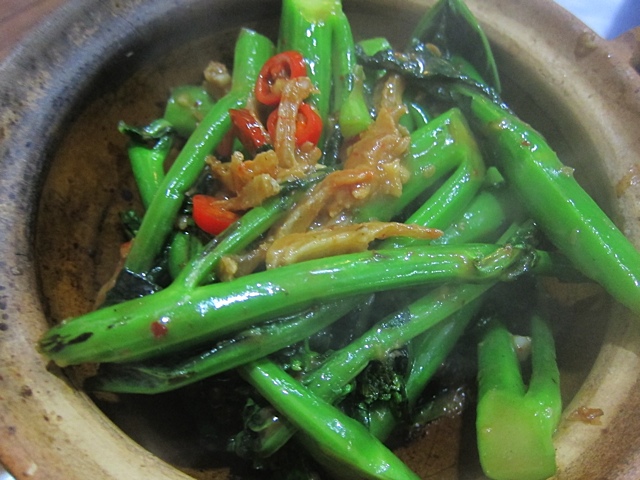 Chinese Broccoli with Shrimp Paste in the claypot at Kwan Kee

As you can see from the freshness of the vegetables, this is not a long braise…but the cooking in the clay pot, presumably with a cover, builds up intensity of flavor.

(NOTE: Last week I covered the Michelin two-star restaurant Summer Palace, at the great Island Shangri-La hotel. In a completely different environment!…they too serve clay-pot dishes, though the clay pot is a tiny percentage of their menu offerings. Here’s a delicious one I had there: 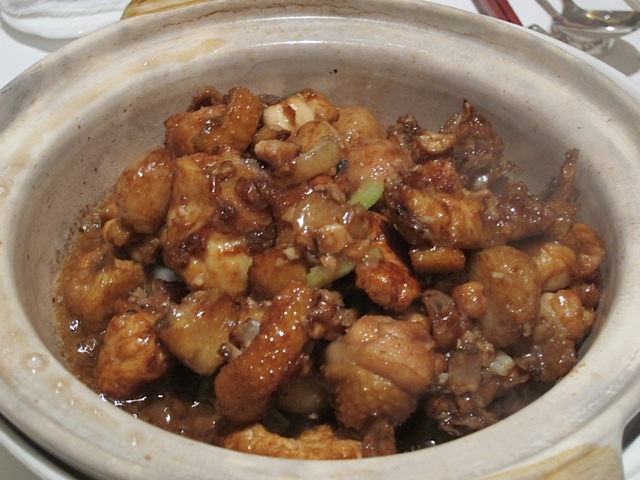 Chicken in Clay Pot with Scallion and XO Sauce

The second category of clay-pot dishes in clay-pot restaurants, is clay pots with rice. Why would you want to compromise your top-layer proteins with an under-layer of rice? Because the rice is delicious…and adds great texture to the dish…especially the way the rice is done here… 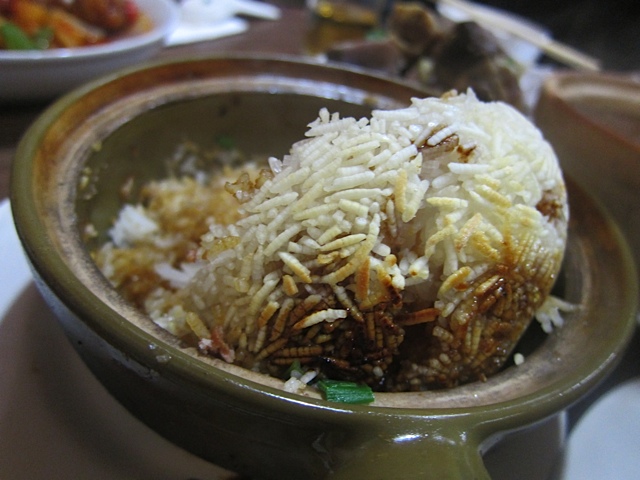 This is nothing less than a socorrat, the great crusty bottom of a paella! Furthermore, when you look closely, you can see that the special rice they use has segmentation in it, making it look almost like something from the insect kingdom! 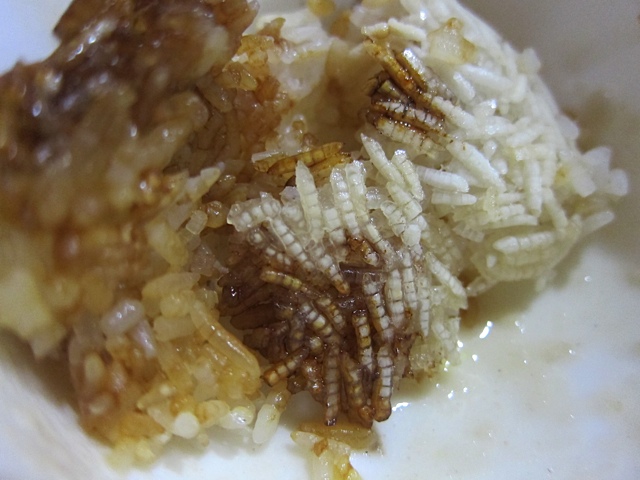 You get amazing chew from the “segmented” rice

But of course what’s on top of the rice is also important. We ordered kind of a Mixed Funk clay pot with rice, featuring preserved duck, salted fish, liver sausage… 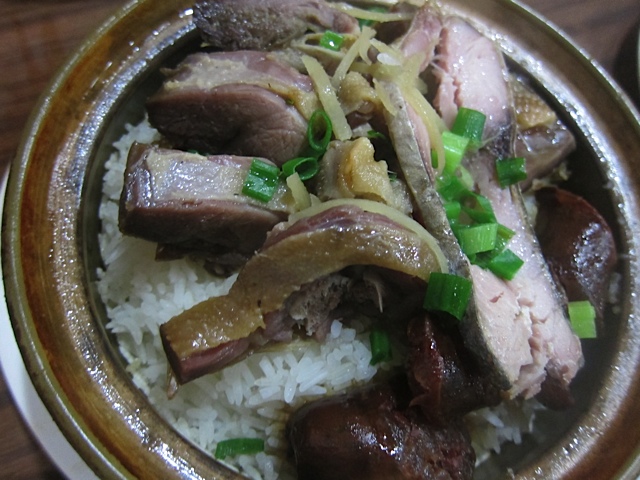 …and it was screamingly delicious. All the top flavors here were wild…especially the liver sausage, in the lower part of the photo, which had the most extraordinarily deep mix of saltiness, sweetness, organ flavor and something that almost seemed alcoholic.

As if all this clay-pottery were not enough…Kwan Kee serves a wide assortment of dishes that have nothing to do with pots! Here are two amazing stir-fries: 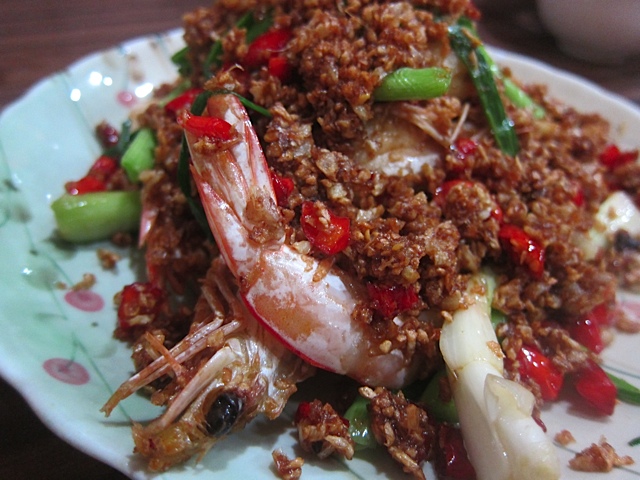 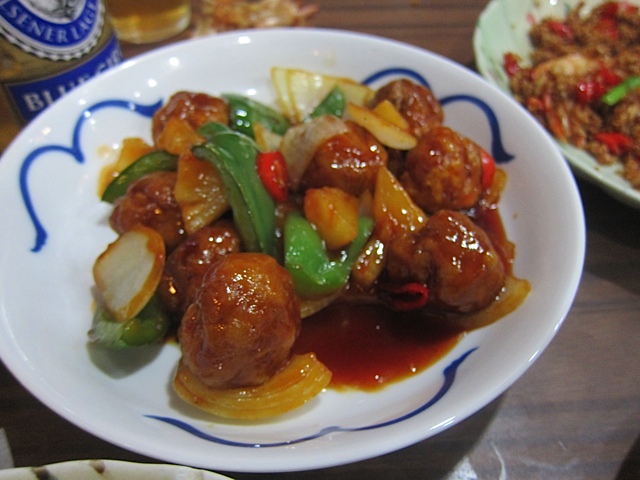 The best sweet-and-pungent meatballs you’ve ever had

(intriguingly, these were ordered by our Hong Kong guide, to our dismay…but they were delicious!)

And there are all kinds of other cooking techniques represented, such as… 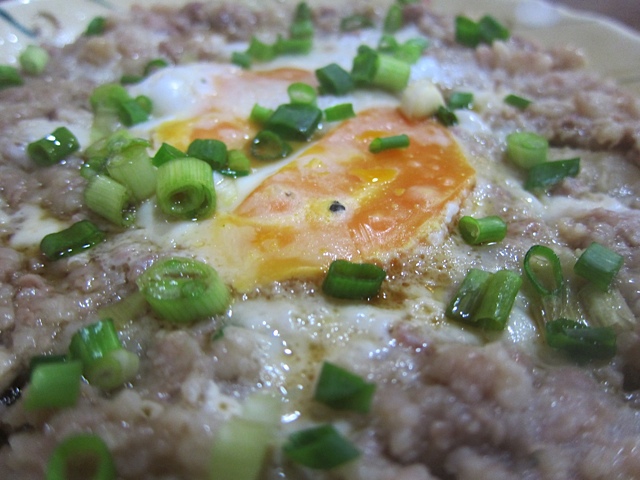 If you’re in Hong Kong…go to pot! Both Woo Cow Hot Pot and Kwan Kee are must-visits! But be sure to reserve…

Coming soon: the story of BBQ meats in Hong Kong!