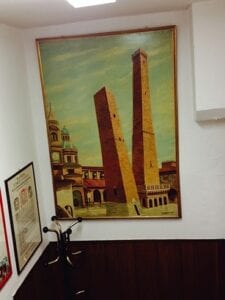 Once upon a time, long before I travelled to Bologna—also known as Bologna the Fat—I heard that it was the greatest eating city in Italy, towering above the others. That’s what serious eaters have made of it for decades.

Today…mama mia, is that contention in dispute!

To begin the debate, it’s wise to establish the things that are still beyond argument.

Few doubt that the region around Bologna, Emilia-Romagna, is the heart of Italian cooking.

Few doubt that Italy’s greatest salumi (a wide variety of hams, sausages, etc.) are at their best in Bologna. For one thing, the city is so famous for its wide sausage that Americans have taken the city name for their version. There it’s called mortadella (and is taken very seriously): 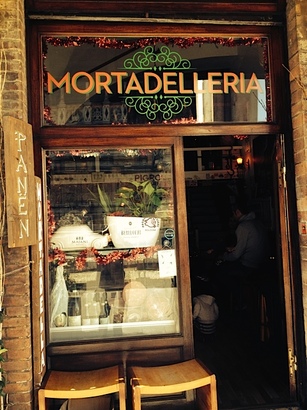 A shop in Bologna devoted to mortadella 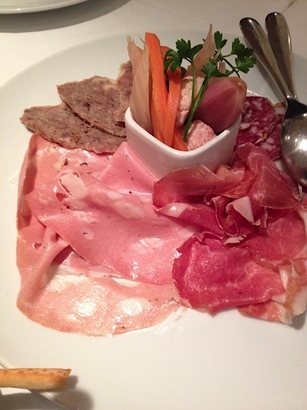 A plate of salumi in Bologna, with mortadella front and center

In America, we call it baloney (and it’s nowhere near as good!) Bologna also features the widest array of northern Italian hams, including great versions of prosciutto from nearby Parma, and coppa from nearby Piacenza: 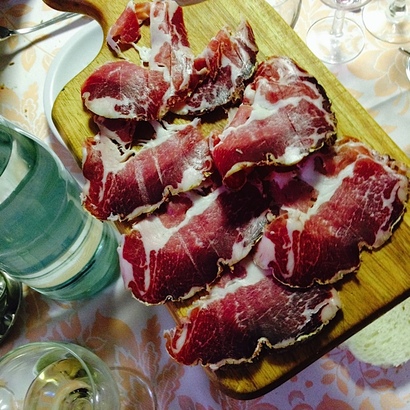 Coppa, or cured pork neck, homemade at a restaurant in the hills near Bologna

Few doubt that Bologna features some of the greatest food shopping in Italy, with a conglomeration of amazing stores off of the Piazza Maggiore, on Via Pescherie Vecchie. And wine-lovers like me are completely sold on the Bolognese approach to abbinamento, or food-and-wine matching; Bologna is the largest city near the production of Emilia’s fabulous dry sparkling reds and whites, which go so brilliantly with Bolognese cuisine: 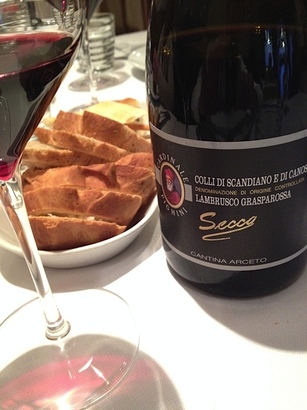 Dry red Lambrusco from near Bologna, one of the world’s greatest food-matching wines 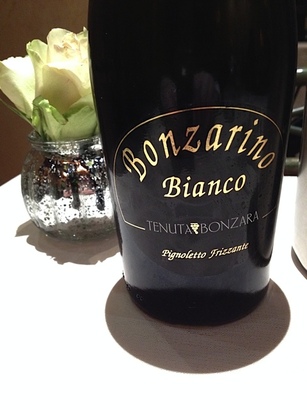 However, the question remains: is Bologna the great restaurant city it once was?

I found other Emilians—from Parma, from Modena, from Piacenza, from Reggio-Emilia—to be particularly tough on the restaurants of Bologna. “They’re not what they used to be,” the other Emilians keep telling me.

To get an up-to-the-minute view of dining in Bologna—the greatness of which was one of the fundaments of my adolescent armchair travel!—I went to The Big Fat One recently, and devoted a whole week to discovering the truth.

I made sure to bring a belt with a few extra notches.

And what I discovered was this:

I understand the reasons why diners may sneer at contemporary Bologna, but if you go there with the right strategies, and if you arrive aware of what you must avoid, you can eat brilliantly in this place. I’m not sure I’d want to spend a month here eating, as I might in Rome, because the super-rich Emilian cuisine starts to seem repetitive. But for a dose of what I consider to be Italy’s greatest regional food, the thrill is incomparable.

It just doesn’t work in Bologna.

However, I would advise you to seek out restaurants that have a little creativity. It seems as if the new ways of cooking have breathed life into the Bologna restaurants…as long as the menus remain mostly traditional. And, of course, I would strongly advise you, at these places, to order traditionally from the menus. 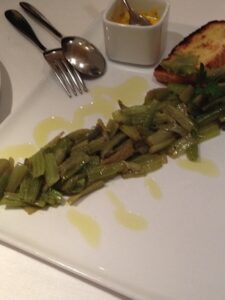 Cardi with a creative anchovy sauce at Caminetto d’Oro

A perfect example is Caminetto d’Oro—which has been around since 1927, but has a fresh, modern feel to it. Recently, I was tempted by a creative version of cardi, or cardoons, a long, stemmy late-winter vegetable; it was served with a creamy, unconventional anchovy sauce on the side.

It was flashy, in its way, but a little bland. Making much more impact was the utterly classic tortellini in brodo—Bologna’s killer small dumplings (maybe 50 to a portion), stuffed with meat, served in a golden broth made from capon (with some beef in the broth as well). In Bologna, you can also find tortellini served in a creamy sauce, but, trust me, the broth route is supreme in this land. 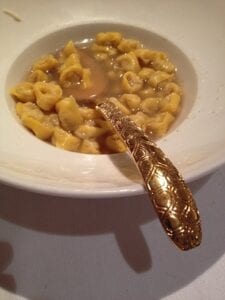 I have eaten this spectacular Emilian specialty all over Emilia…but this one, in Bologna, was unquestionably the best in my experience. Rich broth, nutmeg-spiked tortellini, the resilient chew of a lifetime.

Another classic restaurant with creative tendencies—also in walking distance of the Piazza Maggiore—is Trattoria Battibecco (Via Battibecco, 4B), a fairly chi-chi place with a wood-beam ceiling, wide spacing of tables, and lovely off-white linen tablecloths. 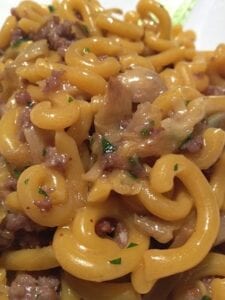 Once again, for me, the most memorable dishes were the classics. At the top of that list is an amazing pasta dish prepared with a fresh, homemade local pasta called gramigna, pasta spirals that resemble fiddlehead ferns in shape, each one about 3/4″ across. What made them remarkable was the chew, which was surprisingly tough and chewy for pasta fresca. But the classic sausage sauce which cloaked the pasta, touched up with artichoke hearts, was also wonderful—really more of a meat glaze than a sauce, in the classic Italian tradition of under-sauced pasta.

As in all the classic cooking at Battibecco, the key is the subtlety and refinement.

That’s certainly what I found in the Cotoletta di Vitello alla Bolognese, Glassata con Prosciutto e Parmigiano, a long, thin slice of veal, with a perfectly fitting prosciutto slice on top, “glazed” with a tan, buttery smear of heaven. This is the kind of irresistible cooking that earned a global reputation for the food of Bologna.

If you’re going to choose one of the old-time, famous, purely classic restaurants…make sure you don’t choose a tired-and-touristy one. For they do exist!

One good strategy for avoiding the tourist traps, of course, is to find a classic restaurant unknown to tourists! 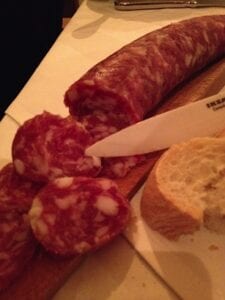 I worked hard on this one and finally made a good friend, born in Bologna, who was able to steer me towards his favorite place since boyhood, which no one else had told me about!

It’s called Biagi, in an out-of-the-way neighborhood much further from the Piazza Maggiore. It has been running since 1937, always in the hands of the Biagi family…even now, in the care of Fabio Biagi, who’s an affable joker. The front of the restaurant is narrow, tavern-like, before it expands into wider rooms in the back; it is always filled with rollicking parties that seem quintessentially Bolognese.

Recently, Fabio started me off with some house-made strolghino, an amazing sausage, extremely soft in texture (as they say in Italian, morbido), made from the revered part of the pig used for culatello, an ass-ish cut turned into ham not far from Parma.

Next came a very special version of tortellini in brodo. The tortellini, with a filling that’s one-third mortadella, one-third prosciutto, and one-third pork, are much smaller than usual…and swim, of course, in a beautiful capon-beef broth.

When I asked Fabio if the tortellini were made in-house, he said “Of course…because it is very cold outside!”

Also made “in-house” are the remarkable tortelloni–stuffed with ricotta, Parmigiano-Reggiano, and spinach, glossed and glistening with butter…certainly the most memorable tortelloni ever. 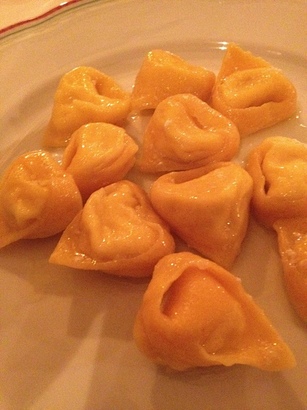 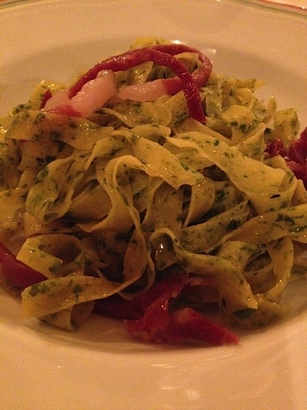 And if you haven’t had enough brilliant pasta, tuck into the various dishes of tagilatelli–so thin they’re practically see-through, but with a ton of resilient texture. The tagliatelle con il prosciutto crudo is pregnant with pork fat and the tagilatelle con il ragu Bolognese, the classic, was the best I’ve ever had, the chunky meat sauce turning remarkably buttery with the addition of Parmigiano-Reggiano. 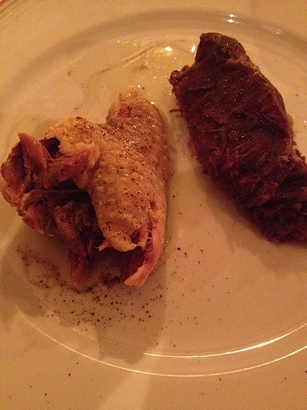 Chicken and beef cheek at Biagi

I tried a few secondi…and ended up loving, most of all, Fabio’s non-theatrical version of bollito misto, or boiled meats. The night I visited he had only two meats on offer, served from the kitchen, not from a bollito cart…but both meats were exquisite.

The beef cheek was the ultimate melt-in-your-mouth hunk of beef, and the chicken…wow!…mine was one of only 15 birds Fabio gets every month, from a chicken farmer in Faenza, in Romagna, about 30 miles from Bologna. In case you think that modern chickens don’t have much flavor…I’m sure you’ll believe, as I do, that THIS is where the flavor went.

Lastly, I want you to consider a visit to Diana, one of the Bologna warhorses, an old classic that has attracted the tourists, which has brought the prices to high levels…but my meal there was likely my favorite in Bologna, amidst the oh-so-elegant diners in a long, bright, graceful room with white tablecloths, wood floors, cane chairs, and large arches. 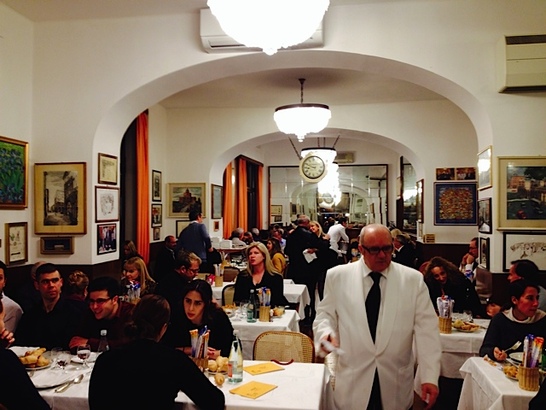 Diana at about 9 PM

Let me say flat-out: the salumi here is disappointing. But the pasta more than made up for it. I loved the local specialty passatelli, which is a kind of pasta made from leftover bread, and served in a very Bolognese broth. Then came the larghissime (which the Tuscans might call pappardelle), big yellow flaps of marvelous house-made pasta, served with a ragú loaded with the pure taste of meat. 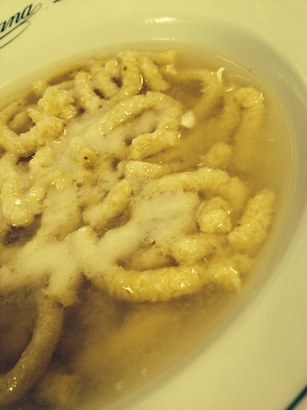 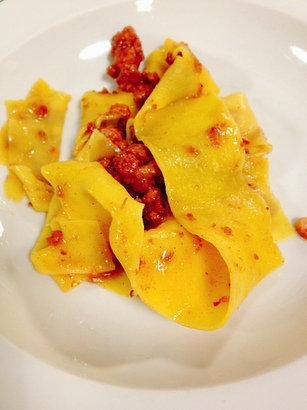 But best of all was the extraordinary lasagna verde…not pre-assembled and baked, but cooked on command, with an amazing layering of green pasta, meaty sauce, béchamel, grated cheese, and–a local, seasonal touch–chunks of unborn egg yolks. 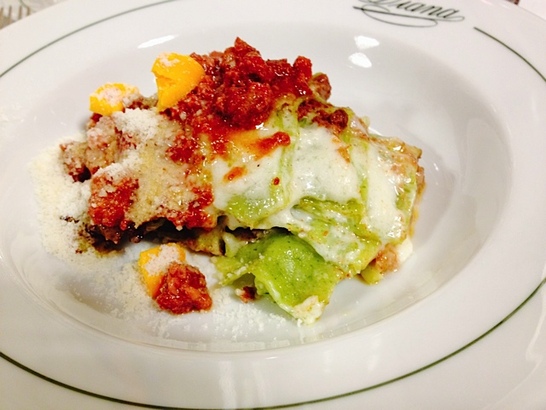 But here the secondi roar as well. Most diners come to Diana for their famous bollito misto–which goes the whole distance with gleaming tableside stands, carving waiters, a dozen meat choices, and fabulous sprightly salsa on the side. 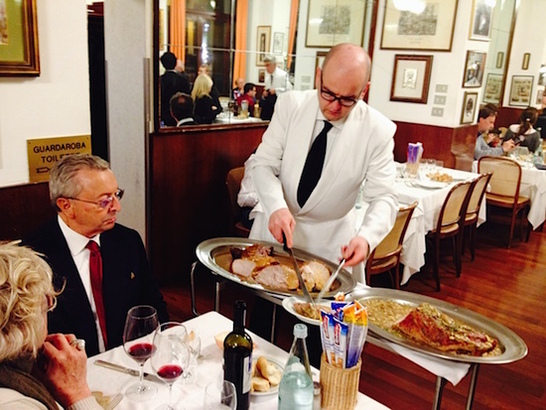 A waiter at Diana carving meats 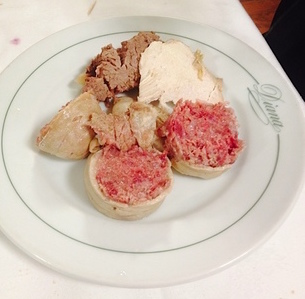 A plate of Bollito Misto which includes my favorite cut, the fatty-garlicky cotechino sausage 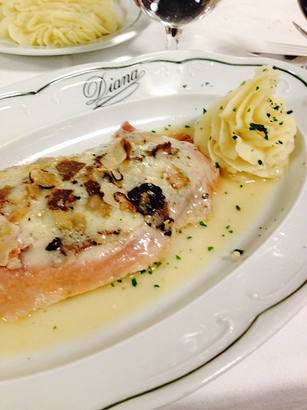 And if all that were not enough…Diana is the place I found a dish I’ve dreamed of since reading about it in the 1960s…a kind of veal scallopine, with ham and cheese, but made with turkey!

Is Bologna the greatest eating city in Italy? Given the modern treasures in Milan, Alba, Florence, Roma, Naples…probably not. But, if you’re ready for a magnificent blast of Italy’s richest, most heart-warming cuisine, a week in Bologna will surely cure whatever ails ya!