Carnal Knowledge, to the Max: The Beefiest Week of My Life!

The reality is this, however: a concatenation of events forced me into not just the beefiest summertime week of my life…but the beefiest week I have EVER had! Ninety-degree weather be damned! The temperature outside was almost as hot as the oven!

I’m eager to tell you all about it, just so you can contemplate what it looked like and felt like coming in from my POV. Amazing. And amazingly delicious! I learned this: it is possible that there’s not such a thing as “too much beef!”

Warning: Merely by looking at the photos below you will probably sustain a discernible rise in your cholesterol. It may be worth it.

DAY ONE:
Journey of 1000 Miles Begins with a Single Steak 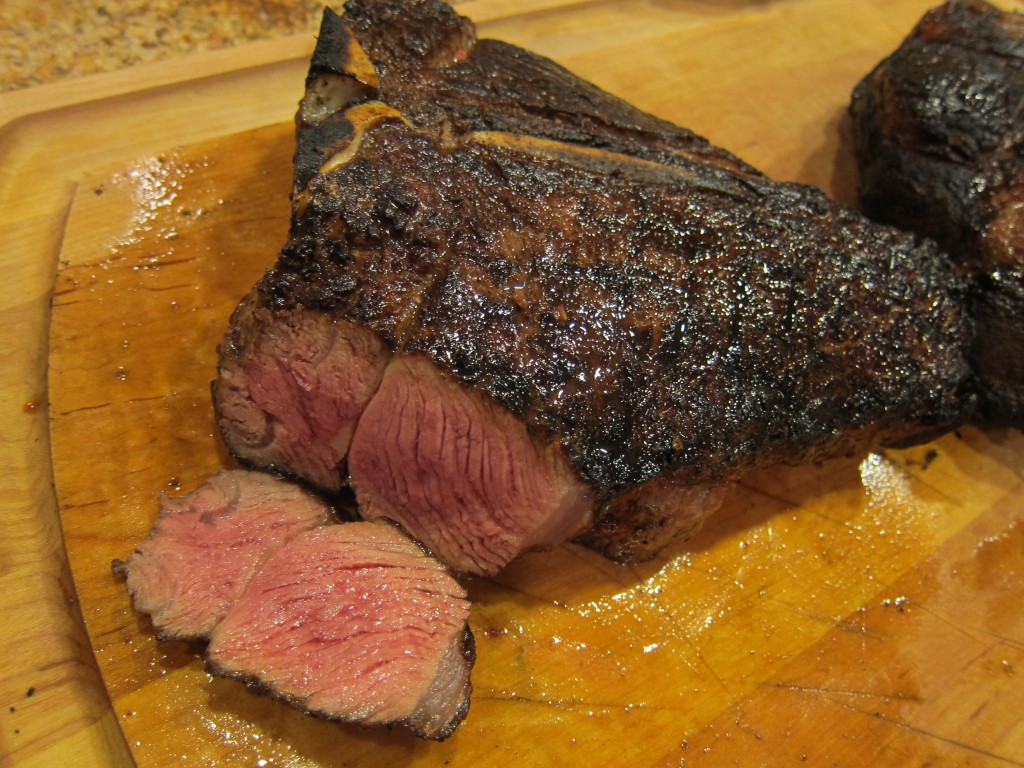 A mouthwatering Lobel’s porterhouse, right off the grill

The beef binge actually began in New York, with my visiting Texan friends…who wanted the best retail steak New York has to offer. So I took them over to Lobel’s on Madison Avenue… 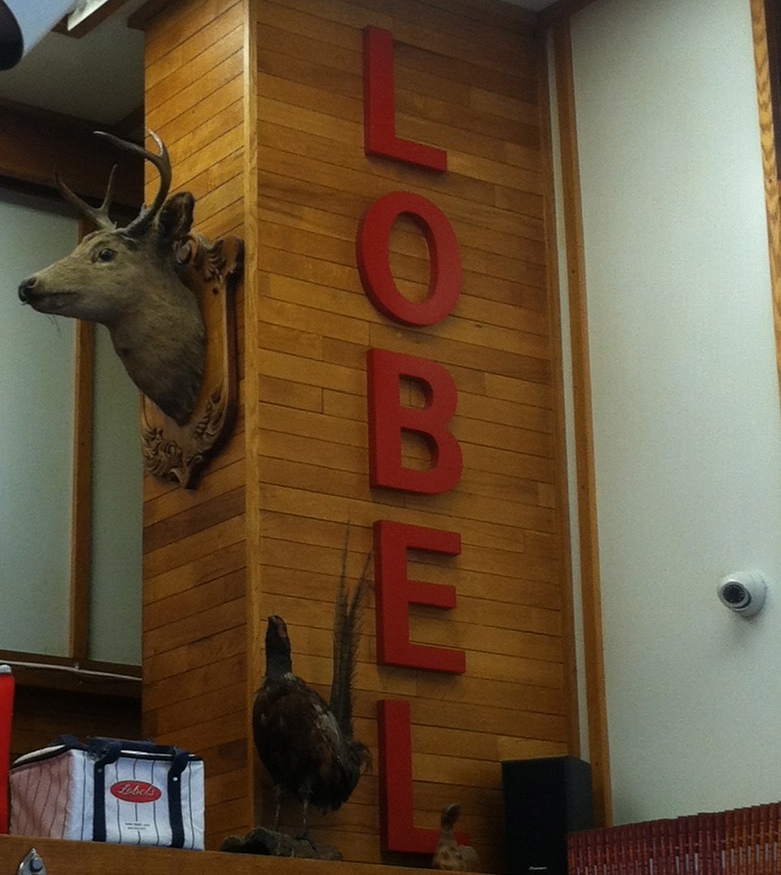 …where Evan Lobel cut us some righteous porterhouse steaks off of a big aged short loin.

The splendor (NOT in the grass!) of Lobel’s porterhouse

I gotta say…wow! We looked at three different hunks o’ beef before Evan decided this marbled fat dream was the right one! Cooked on a Manhattan backyard grill, the steaks were insane…among the best shop-bought steaks I’ve ever had, buttery as hell. My beefy juices were in full flow. 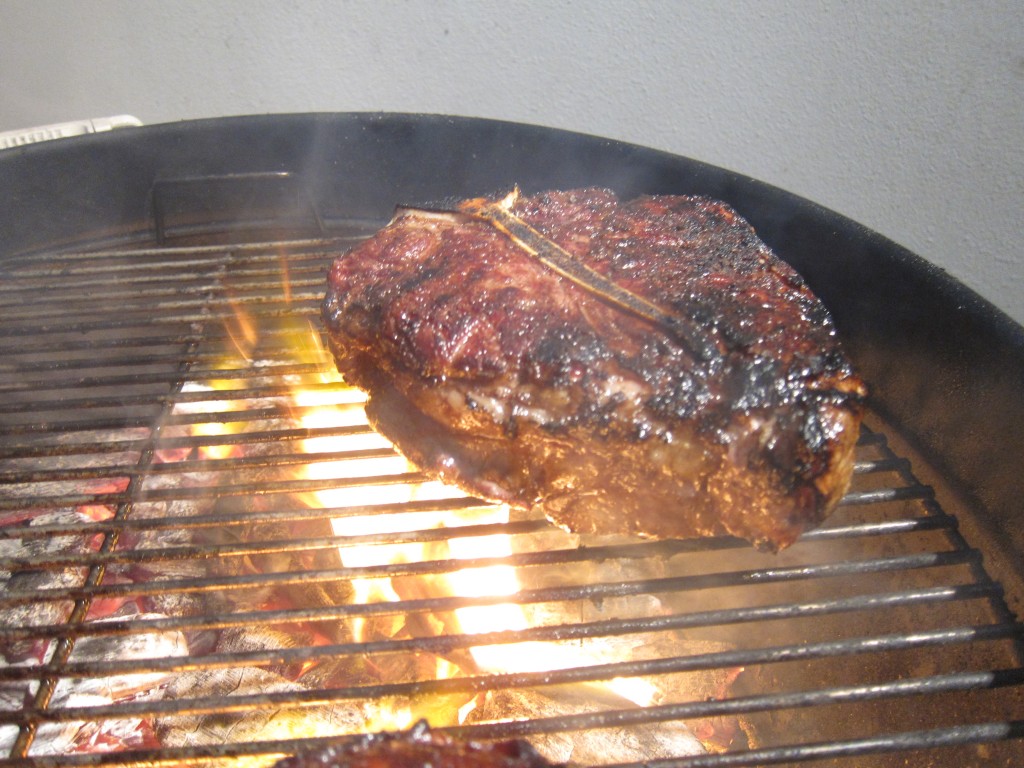 But little did I know what lay ahead…

DAY TWO:
It Takes No Practice to Get to Carnegie Deli! 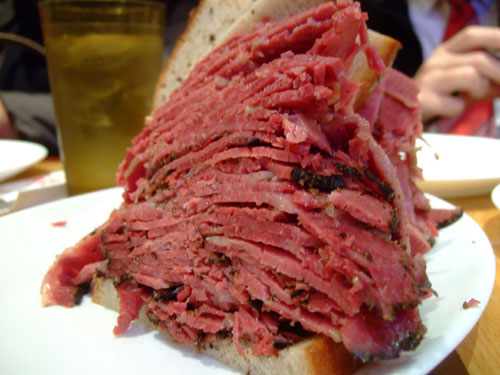 For neurotics who can’t make up their minds: the Woody Allen at the Carnegie Deli in NYC. Photo courtesy of www.kevineats.com

All right…I was shoving off for Boston…but my friends first required a little more NY catnip at the Carnegie Deli! So off we went for lunch, facing pounds of cured beef…mere hours after the pounds of grilled beef.

Now, when I go to the Carnegie Deli, I can never decide whether it’s a corned beef day (more subtle), or a pastrami day (more spicy). A perfect compromise (if deciding’s too much work) is their towering “Woody Allen”–piles and piles of both meats together on a sandwich. The only problem with this sandwich (and with Carnegie’s triple deckers) is that you cannot get your mouth around them! So I always ask for extra rye bread, and then 2 or 3 of us can build little “satellite” sandwiches off the main sandwich. Be warned, however…the extra bread that comes from the kitchen isn’t nearly as good as the extra bread that comes from the deli counter up front! Let them know that you know that. Let’s face it: ordering here is a negotiation, anyway.

Speaking of which…when you order your corned beef or pastrami, they will assume you like it lean, and proceed to bring you the dry stuff. NEGOTIATE! Of course, if you dare to say the F word–“Fatty!”–what you get may actually be too fatty! (Like hard curls of fat with streaks of meat.) So somehow you have to let them know you’re not a lean freak (unless you are, in which case oy vey you’ve come to the wrong restaurant!). “Juicy” is a good word in current usage…but, whatever words you choose, let them know that you’ll kvetch from here to Yom Kippur if there’s not a good amount of fat in the meat, as long as it doesn’t overtake the meat.

DAYS THREE AND FOUR:
And the Beef-Eaters Shall Rest

(Come on…just arrived in Boston…had lots of clams and lobsters to get through!)

DAY FIVE:
The Return to Form

Still in Boston…and now with shellfish coming out of my ears…it was time to explore a Boston classic right across from Quincy Market that I’d never been to: Durgin Park, with a reputation for some of the country’s best prime rib. I know, I know…the beef’s still roiling inside me. But a little voice said “go for that rib, brother, just go for it”…and I obeyed.

Did I make the right choice?

Two views of the massive 32-oz. prime rib at Durgin Park in Boston

After arriving, the thing I did right was discuss with waiter and GM how serious I was about my prime rib, whereupon followed lots of discussion and fuss about which hunk to serve me, pulled from the oven when, which section, etc. (Initiate this discussion yourself!) The thing THEY did right…was serve me a breathtaking prime rib slice, the best I’ve had in a long time. Every section of it had its triumphs: the fatty outer “lip” or “cap,” officially called spinalis dorsi, was buttery insanity; the “eye” avoided all the dry-and-dull traps, tasting sweet, profound and vibrant, with a winning velvety texture; the massive bone was like an overstuffed lobster, with nubbins of beefy goodness popping out everywhere.

This place gets lots of criticism on the internet; someone decided it was “touristy,” and lots of people can’t get past that. Well, tourists there may be…but lots of Boston folk come here too, and have been doing so for decades. Make sure to go to the upstairs dining rooms, where you’ll find the kind of lusty, old-fashioned, communal eating place I adore. 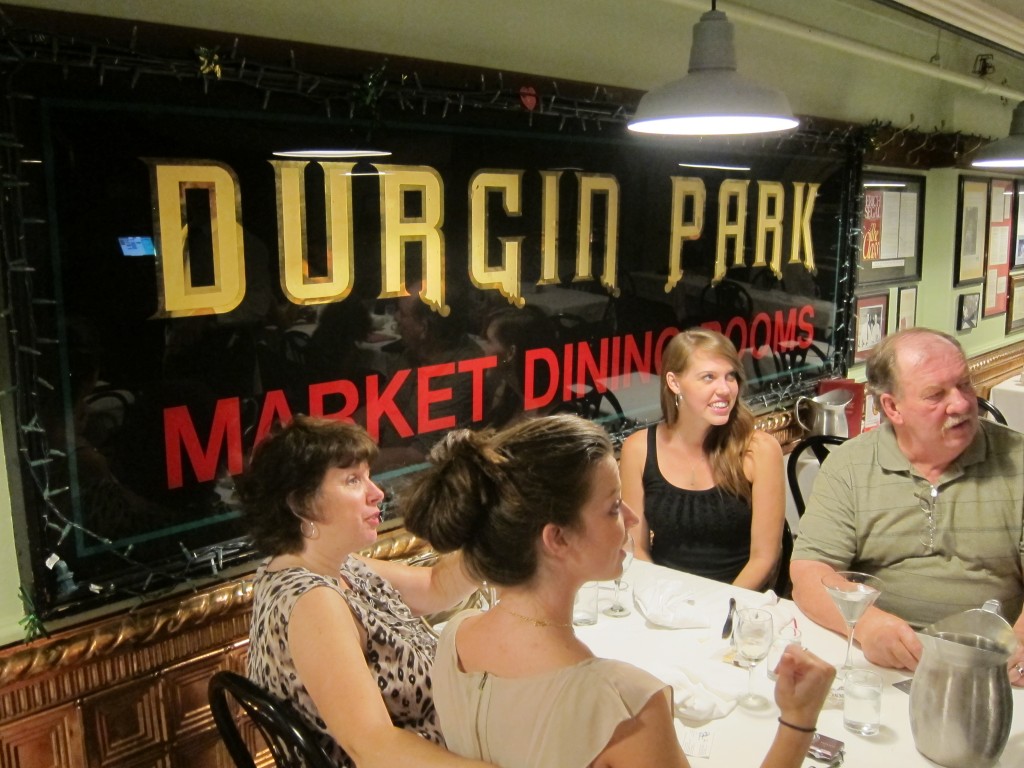 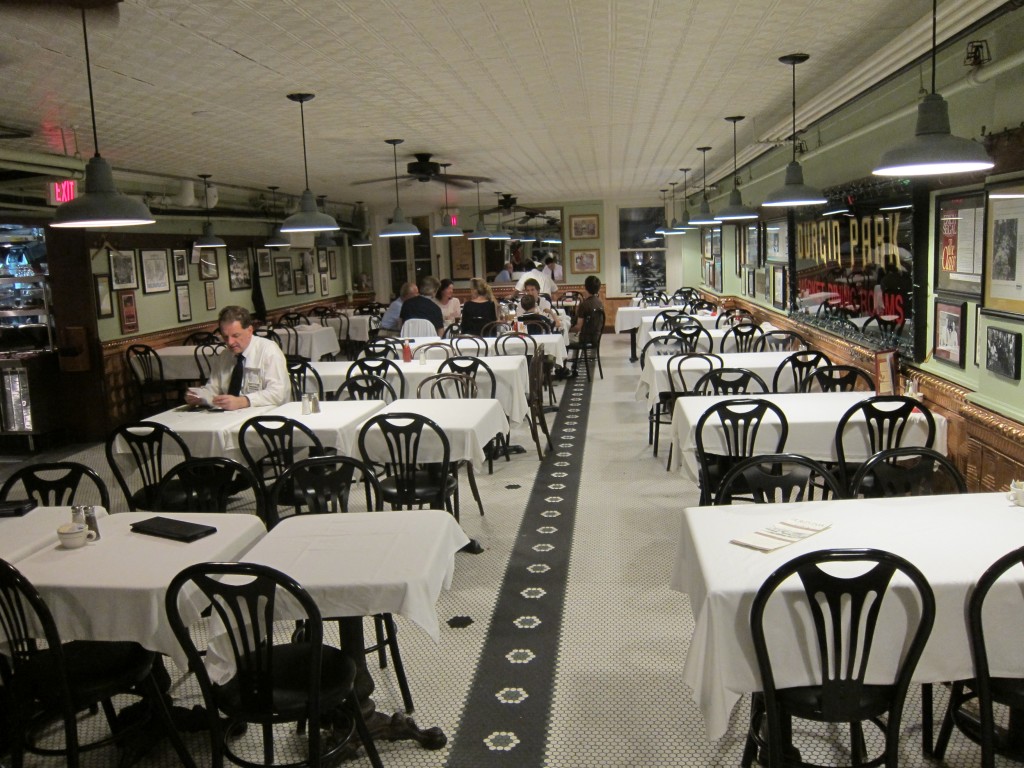 And as if all this were not enough…then there’s the Indian Pudding! This old Yankee dish of cornmeal steamed for hours with molasses has to be just right to be exciting. BINGO! I couldn’t stop eating it, beefed-up though I was, with a fine vanilla ice cream eventually finding every crevice in the dish. 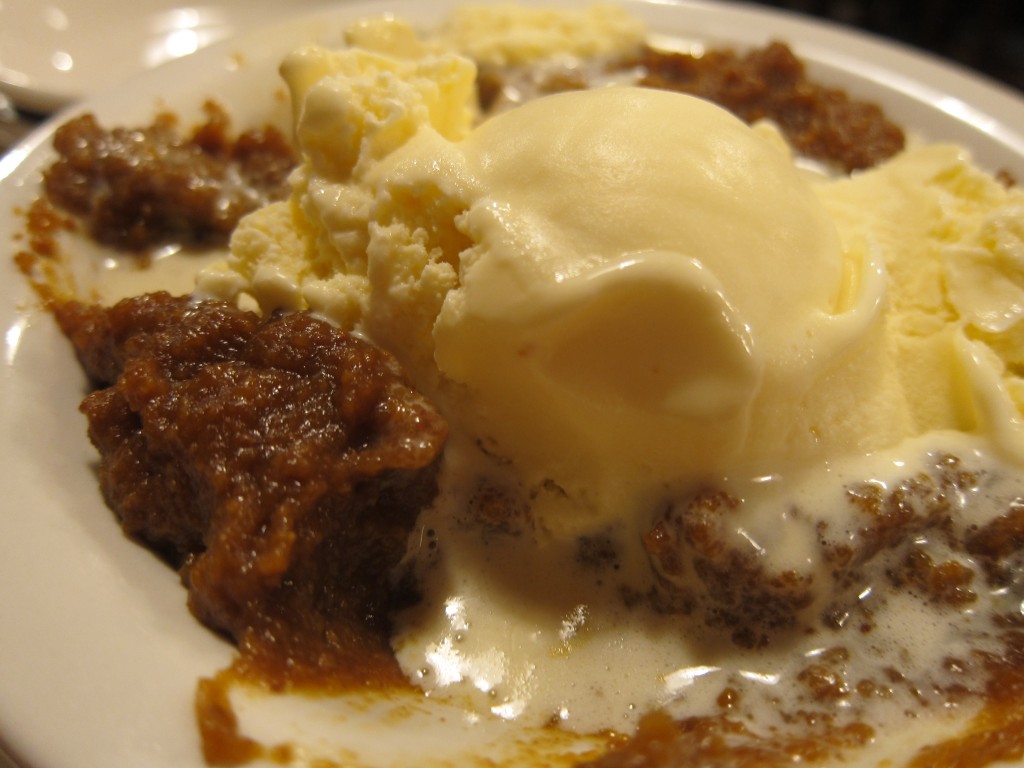 (Does the fast-food burger at the airport count?) 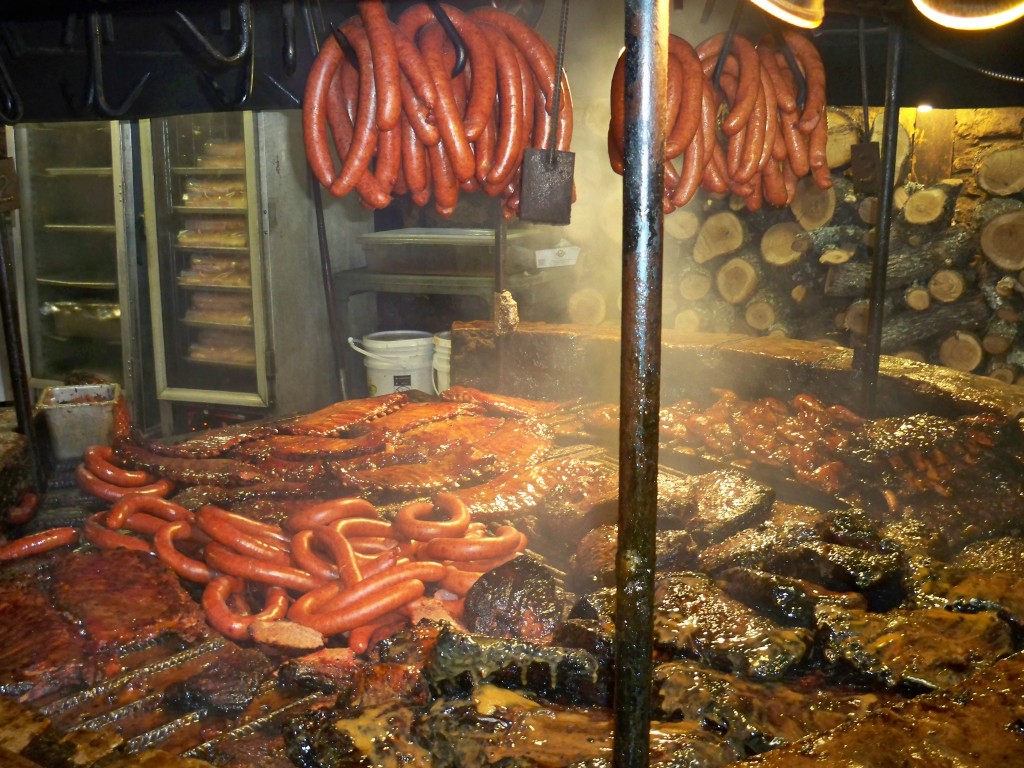 A little bit of BBQ in Driftwood, Texas

Normally, before heading into the world’s prime BBQ zone in central Texas, I like to spend a week preparing myself–which can take the form of string beans, radishes, assorted lettuces, air instead of lunch, etc. Well pardnuh, you know how very far my week was from that regimen…but…but…how on earth could I say “no” when my Texas friends picked me up at noon at the Austin airport on Day Seven and told me we were having lunch half an hour away, in Lockhart, Texas? It was as if a holy version of country music had flooded the car, with an appropriate admixture of celestial light. Lllllll…ockkkk…hart. OMG. The mecca, the cynosure, the epi frickin’ center of the BBQ world!!!

Last time I came to Lockhart (one must make the pilgrimage regularly) was about three years ago when, after touring the triad of monster classics (Smitty’s, Kreuz Market and Black’s)…I declared Smitty’s the winner, with the array of BBQ items that had the highest average quality (brisket, beef ribs, pork ribs, and sausage being among the chief contenders).

A taste of Smitty’s: oak, ready to smoke, in the parking lot (l), and Smitty’s pile-up

But there was no Preakness happiness today. Don’t get me wrong: I will always love Smitty’s. But the ribs, which knocked me out in 2009, did not have the same layering on this visit, and had an off-putting sweetness to them. The brisket was fairly good, but not luxurious.

Nope. The winner on this visit–and I do imagine multiple visits will bring multiple winners, because BBQ ain’t a science–was Kreuz (KRIGHTZ) Market. Let me put it this way: on July 27, 2012, Kreuz Market kicked butt.

There is a sense of play when you walk into the large building, which was built on the edge of town in 1999 (Kreuz Market had spent many decades at another in-town location). Here’s the sign you see: 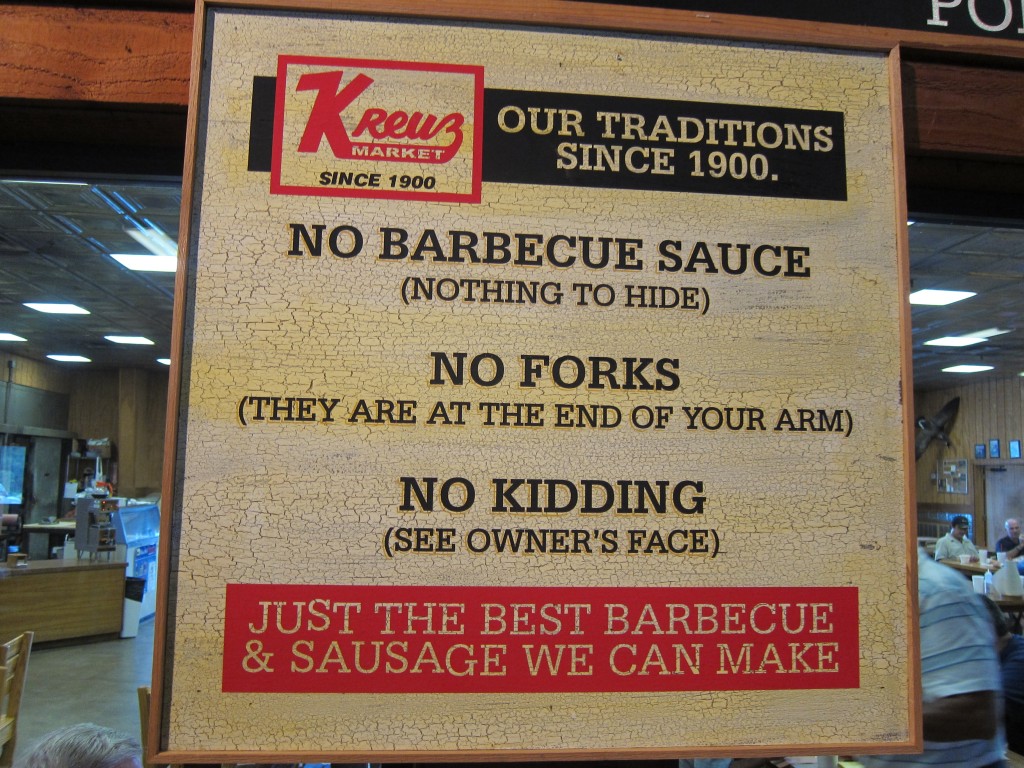 A sense of play at Kreuz Market

But then you see one of the most awesomely somber displays of BBQ-ness you’ll ever encounter. The cutting room, where you get your meat, seems like Dickens in Goya tones of black. Medieval tableaux come to mind. And when things are quiet, the room suggests the quiet desperation of an Edward Hopper painting. 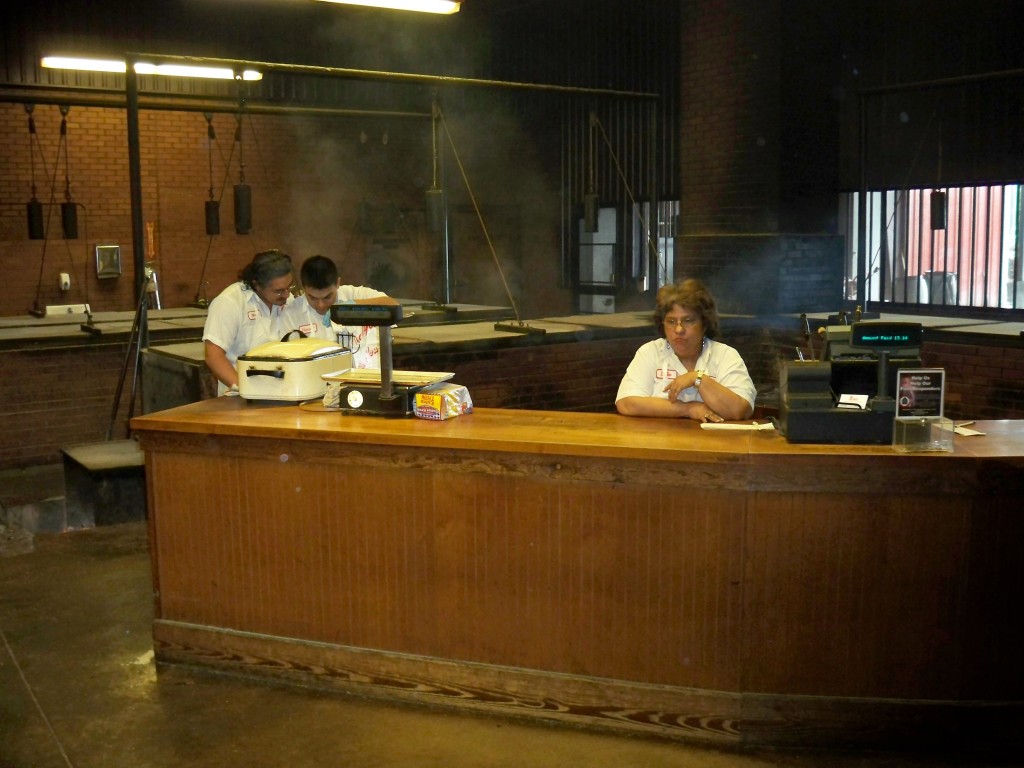 The serious side of Kreuz: the ordering stand, with overtones of Hopper 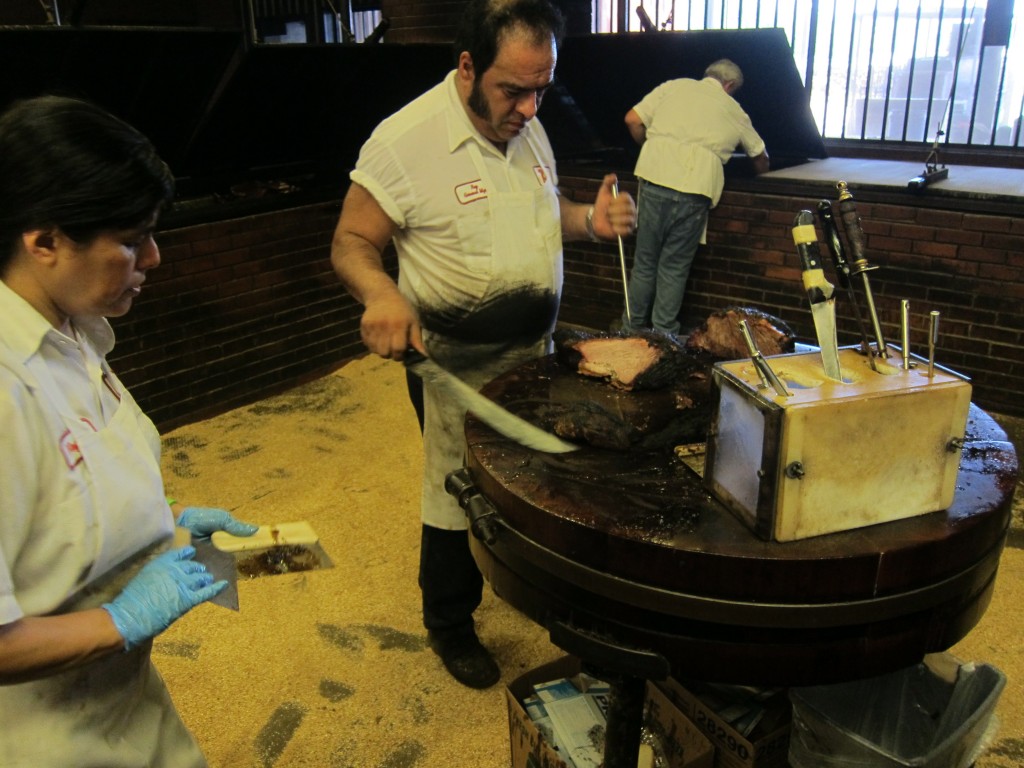 The serious side of Kreuz: slicing brisket, with overtones of Goya

OK, nice pictures. Now screw all that. Let’s get to the meat. 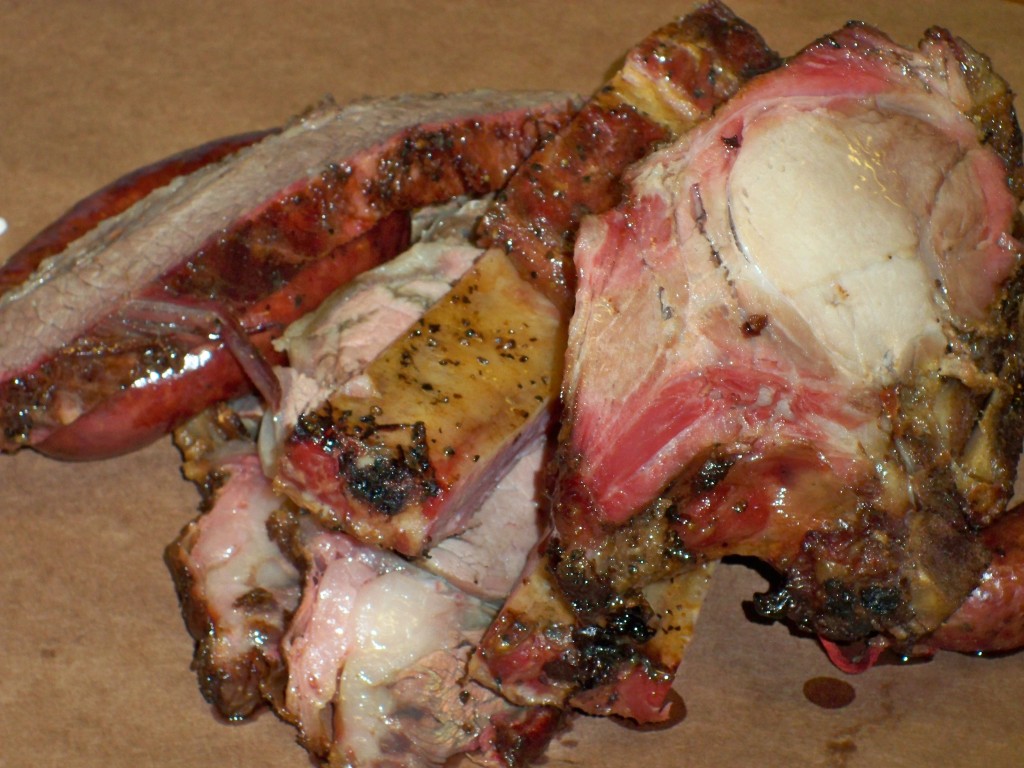 Piling it up at the splendiferous Kreuz Market, with the classic reddish “smoke ring” evident everywhere

On my day this summer, the pork ribs were perhaps the greatest BBQ pork ribs I’ve ever had: just like a layer cake, with striations of brown, pink, fatty, lean, red, moist. Sublime flavor, and they were NOT falling off the bone–your teeth pulled them, as they were meant to do (local Texas religion). But even more thrilling, perhaps, in this insane week of beef, was, of course, Texas’ #1 BBQ specialty…brisket. It is not possible to describe the perfect juxtaposition of crispy exterior, on these fat-and-wide slices,  with an interior so luxurious, so jiggly with melted collagen that your temptations to apply all kinds of sexual metaphors are marginally appropriate. You MUST hit Kreuz Market on a day like this!

Of course, I’m not gonna deny that on your day the brisket at Black’s won’t be the winner… 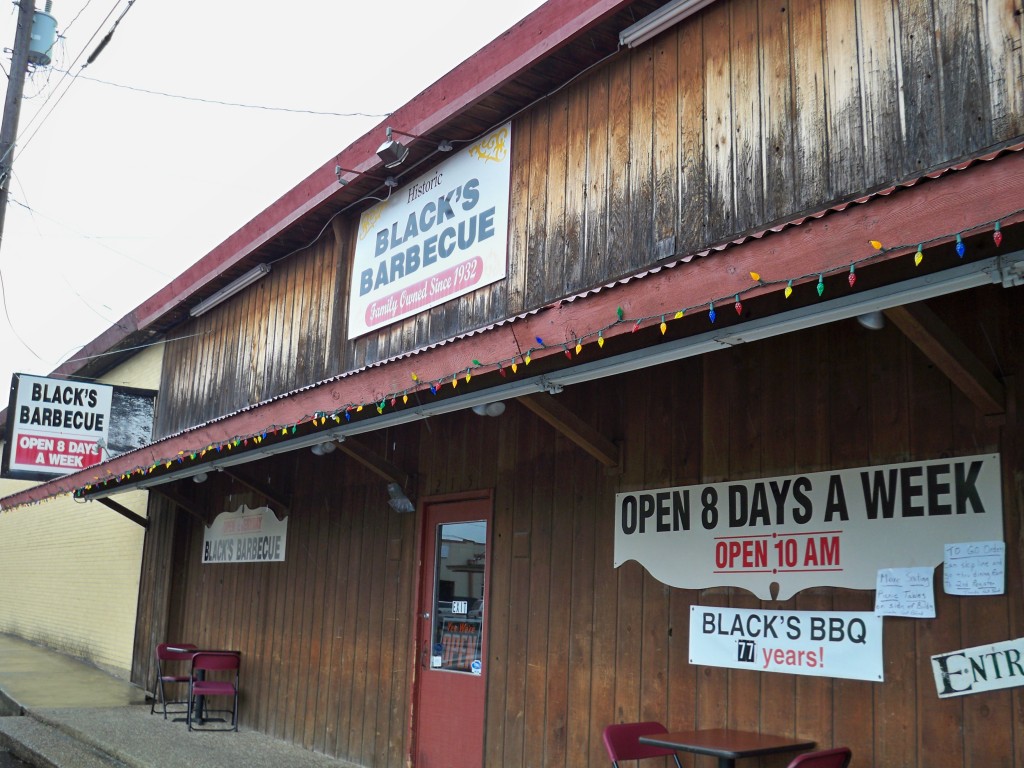 …because on my day this mighty brisket finished second by an eyelash. But I dug its consistency from visit to visit: this is a place where you get a very dark, almost burned exterior, roaring with smoky flavor–coupled with a deliciously moist interior. It is a style, and it is real, and it is delicious. 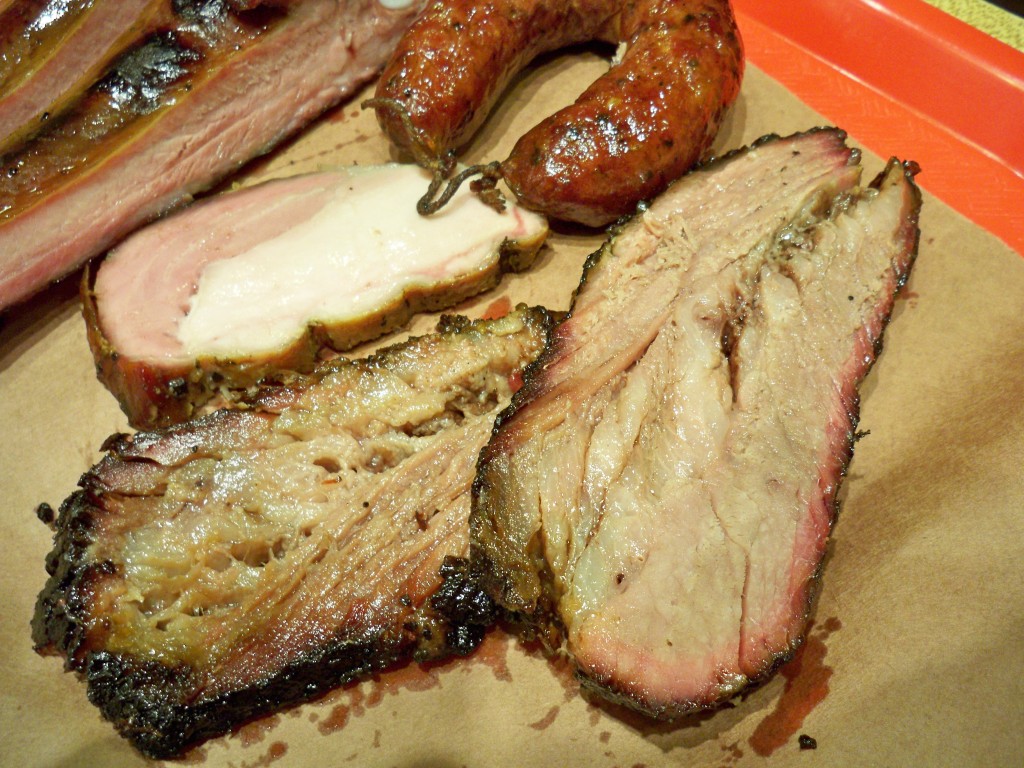 The crisp-ringed brisket at Black’s

Epilogue: You need dessert, don’t you? For if you roll into yet one more BBQ place…the Chisolm Trail Bar B Q restaurant, where the savory goods in general seem a cut below…you can experience an awesome trailer-park kind of dessert: Hot Peach Cobbler with Ice Cream, a ton of it, delicious, served in a styrofoam cup. Perfect BBQ nightcap! 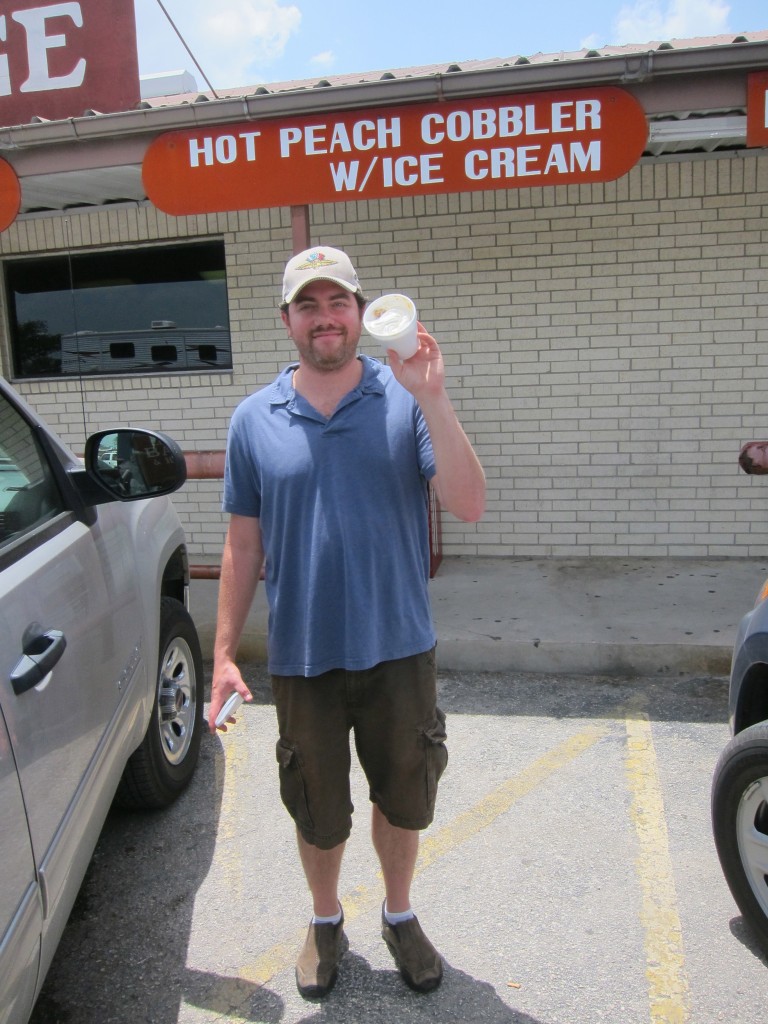 A sweet-toothed colleague ready for the big moment

CODA, DAY EIGHT:
And the Beef Rolls On!

And so, me buckos…deserved I not to lay down me beef fork at this juncture?

Oh no, no, no…for I had miles to go before I sleep.

Sixty-four miles, to be exact.

Back at the Hill Country ranch of my friends was the perfect rounding of this cattle circle: a round of ribeye steaks shipped to Texas from none other than Lobel’s butcher shop in New York. 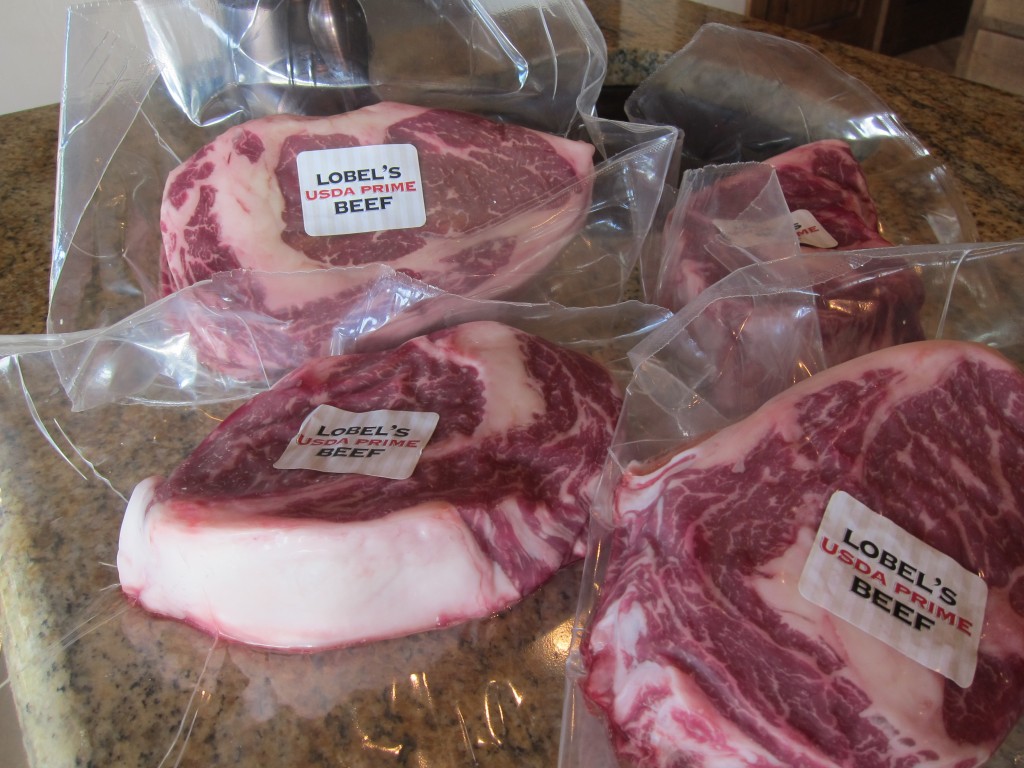 Direct to Texas from the Lobel’s warehouse

But there was one new star attraction on this night, in addition to the beef: my buddy loves his Big Green Egg… 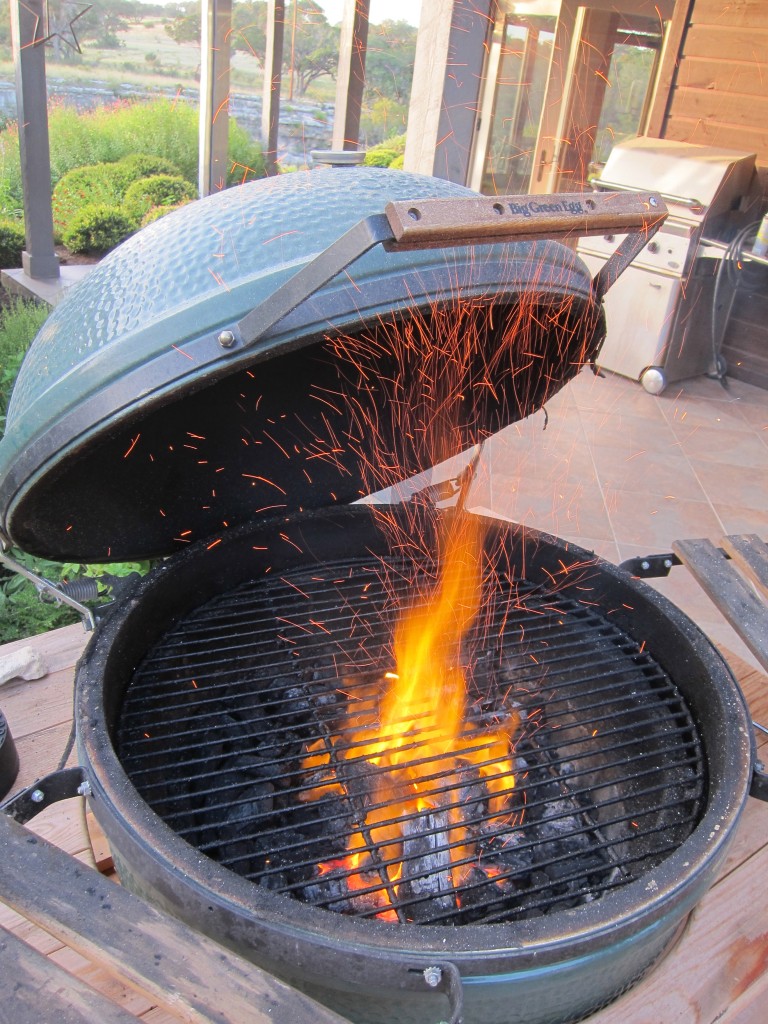 The Big Green Egg, all fired-up and ready to go in Hill Country, Texas

…and tonight would be about the fusion of great meat and great technology. 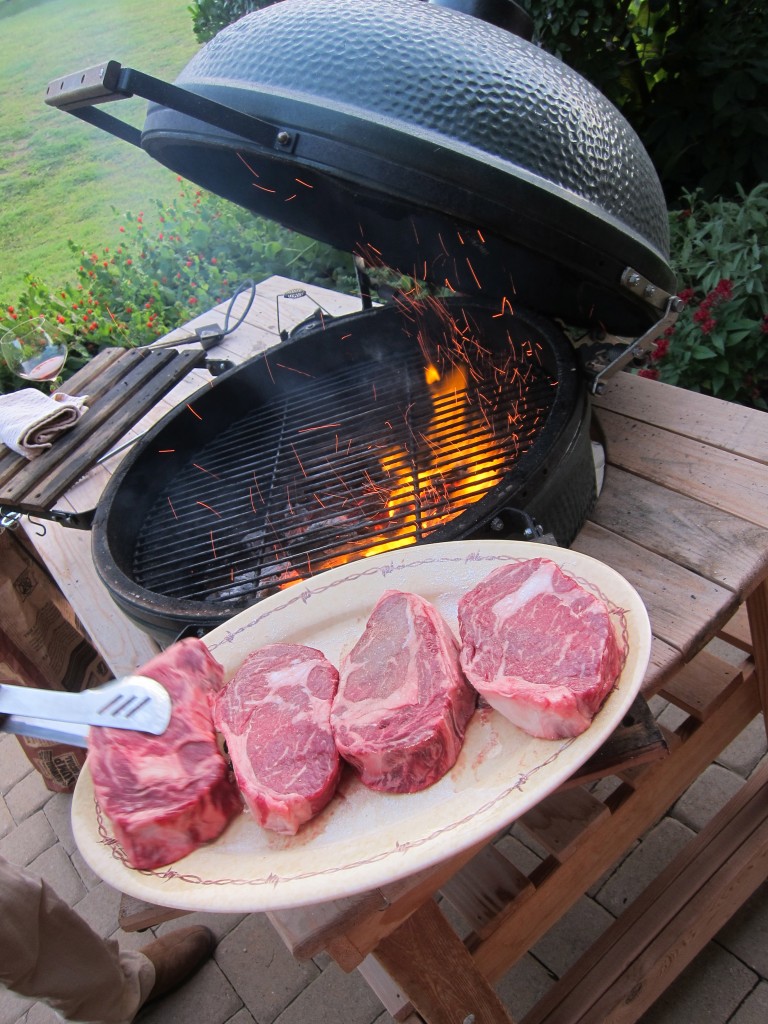 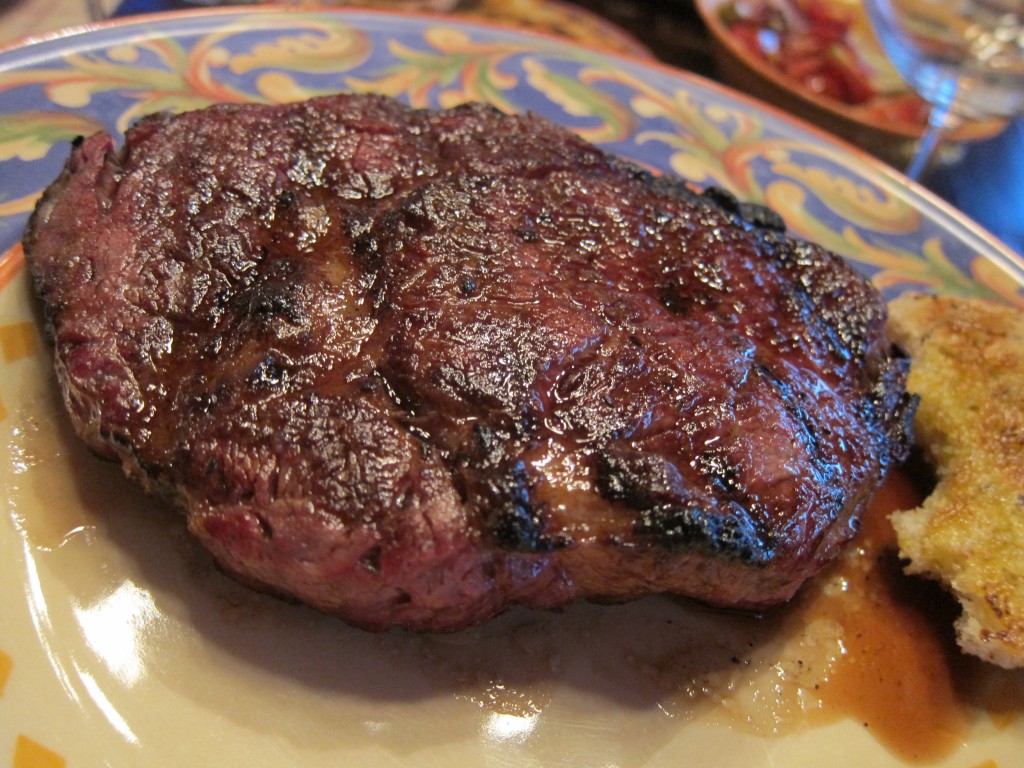 …with this delicious, juice-running result

Are we sated yet?

Yes we are sated.

Would I do it again?

Yes. Without doubt. Or BBQ sauce.

But here’s what I want for dinner tonight: 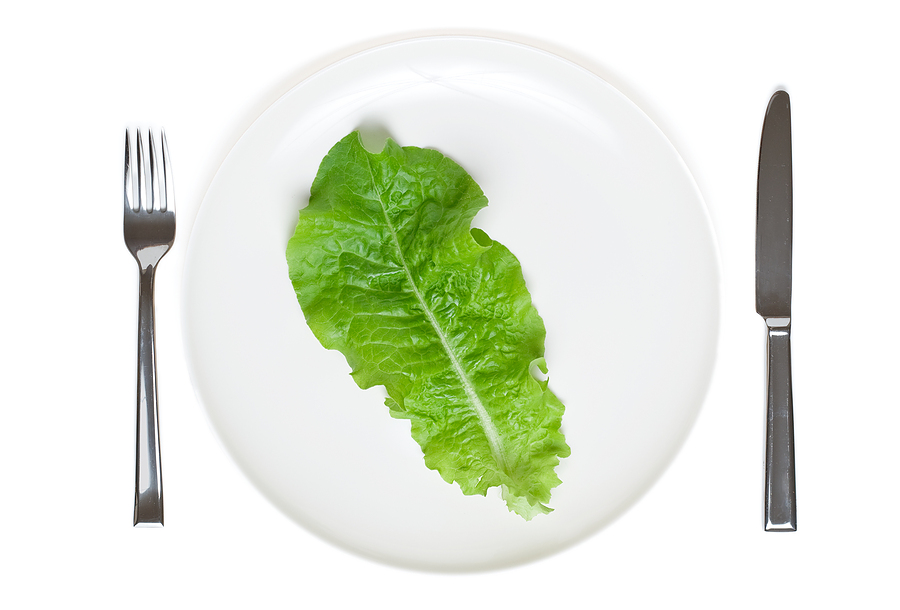