Name That Tuna! The Little-Known, Sexy Varieties that Are Vastly Superior to the Supermarket Cans

Once you get into it, you discover the truth: great canned tuna holds just as much eating excitement as any other rare, high-end specialty product. Just because it isn’t on every foodie’s list—the list that normally includes caviar, foie gras, great cheese, great olive oil, etc.—sure as heck doesn’t mean it shouldn’t be on those lists. Great canned tuna is, without question, a great eating experience—something that James Beard understood many decades ago.

But I must confess: it took me a while to put canned tuna on my personal hoo-hah list. That’s because the supermarket tuna I grew up with—the main ingredient in my beloved tuna-salad sandwiches—was doing the job perfectly well for me. Bumble Bee solid white in oil, some mayo, coupla slices of white bread—who needed something better in 1977? This stuff wouldn’t have won any prizes in gastronomic competitions, but it did its job extremely well. 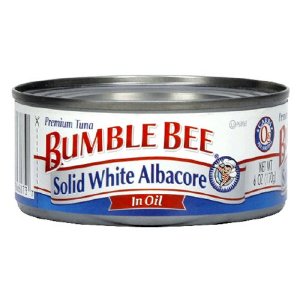 Then came the Great Supermarket Tuna Quality Decline. I’m not sure when it began, exactly, and why. It may have had something to do with the passion for water-packed tuna that transformed the industry about 15 years ago. Or…the change may have been caused by the industry’s politically correct push to make tuna-harvesting dolphin-safe. Of course, one should never discount greed as a factor: large producers are often testing to see just how low quality can go before people will stop buying their products. Apparently, there are a lot of Americans these days willing to buy tuna cans at the supermarket that contain muddy, gritty, falling-apart bits of fishy fish, tuna that I think would be hard to distinguish from cat food in a blind tasting. Firm-textured, mild-and-buttery hunks of tuna in supermarket cans are nothing but pure nostalgia now.

So, a few years back, I made a mental note: do something about it. Improve my tuna life. Try to find tuna that can replace the kind of tuna I used to love, that can once again play a starring role in my beloved tuna salad sandwiches. My receptors opened up.

Then came that fateful day in Modena, Italy. At a food conference, good friend and brilliant feinschmecker Lynne Rossetto Kasper said to me: “Come with me to the mercato; I’ve got one stall I want to show you.” Accompany I did, and what Lynne had for me was a superstar purveyor of canned tuna—who had maybe 20 or 30 different brands of high-quality Mediterranean tuna packed in olive oil. At about the same time, Faith Willinger—another amazingly knowledgeable authority—started telling me how obsessed she was with certain kinds of canned tuna from Sicily.

OK. That was enough for me. I realized: “Omigod. There’s a whole tuna cult thing going on!” Big-time in Europe. Just starting in the U.S. And I, of course, started to become obsessed with the tuna hunt myself.

Did I find tuna that replaces my beloved Bumble Bee of old for the preparation of tuna salad? Yes I did, to be sure. What I’ve found, in fact, in that style, is even better than Bumble Bee ever was. But there’s more. The most important thing is that I found canned tuna out there that goes beyond, that I would never, ever use in tuna salad—canned tuna so good that you’d be crazy to do much to it at all, other than take it out of the can. This is the tuna I alluded to above, when I invoked the holy names of caviar and foie gras. I am not kidding, or making a metaphor. 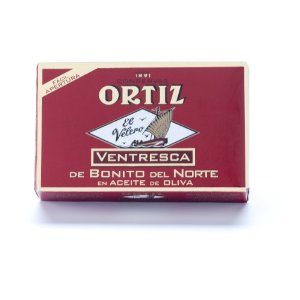 Well, there’s no question about it in Tunaland: ventresca is it. Ventresca is the category you need when you want an extra-special tuna treat, or when you want to make your family or friends gasp with amazement and delight.

What is ventresca? The name comes from the Italian word for belly, which is “ventre.” Yup, you guessed it, ventresca is canned tuna made from the tuna’s belly, from the sexy, velvety hunk known in sushi bars as “toro.” Happily, there are a good many ventresca brands in the U.S. right now from Italy and Spain.

Most of the time, ventresca tuna comes in small, flat, oval tins, usually weighing about four ounces. When you open a tin, you’re likely to find strips of tuna that are very smooth-looking, quite white, rather wide, and very easy to separate from each other. When you taste them, you should be dazzled by the combination of creaminess, and deep, buttery flavor. Not all of it is good, mind you; some is drier than it should be, and less complex in flavor than it should be. But if you know what you’re looking for, this belly will blow your mind. 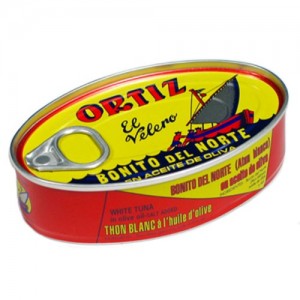 The vast preponderance of upscale tuna that you’re likely to see in stores falls into this category, my second favorite tuna category. This has been the tuna staple of Europe for generations and generations, the stuff most likely to show up on tables there for tapas, antipasto, hors d’oeuvres or mezes. Today, some American producers are making it as well.

Usually, Premium Tuna Packed in Olive Oil is considerably darker, more reddish, than the “supermarket solid white” we’re used to; that’s because the Europeans (who make so much tuna in this style) don’t use albacore, the tuna with the whitest flesh. Hey, albacore can be real good—but, generally speaking, darker canned tuna has more flavor.

Another big difference from supermarket tuna is the fact that producers of tunas in this category use olive oil; most American supermarket tuna in oil is packed in some god-awful veggie oil. The difference, surprisingly, is not an olive-oil taste; almost every tuna in olive oil that I tried did not taste like olive oil. But these products did taste freer from the odd, packaged, off-tastes that sometimes afflict the supermarket product. It does seem to be the case that the olive oil has a better textural affinity with the fish, because most of the olive-oil canned tunas seemed creamier, more velvety than their American vegetable-oil counterparts. Of course, other factors affect that as well. Aging time may be one of those factors. The European olive-oil cans are built for the long-run; most of the ones I tried in this tasting (NOTE: archive piece from 2003) suggested use by 2007! I’m sure the tuna turn-over in supermarkets is a lot more rapid than that.

It’s not all good news, however. The best ones I tried in this category were terrific—but a significant percentage were plagued with one or more of the flaws that often bring down the supermarket stuff. Off-notes ranged from overly salty, to fishy, to grainy, to dry, to muddy, to purée-like. What I especially didn’t like was the taste of fusel oil. What I especially, especially didn’t like was when I had to remind myself that this wasn’t cat food I opened.

For serving, Premium Tuna Packed in Olive Oil is really an in-between category. The truly great ones are, like ventresca, stand-alone tunas. Maybe a little perk-up with fresh olive oil and good salt is in order. Sometimes, this tuna is best with more elaborate perk-ups. And sometimes—particularly if the tuna is firm, but not intense or salty—Premium Tuna Packed in Olive Oil can be an excellent tuna-salad tuna.

3) Premium Tuna Packed in Its Own Juices 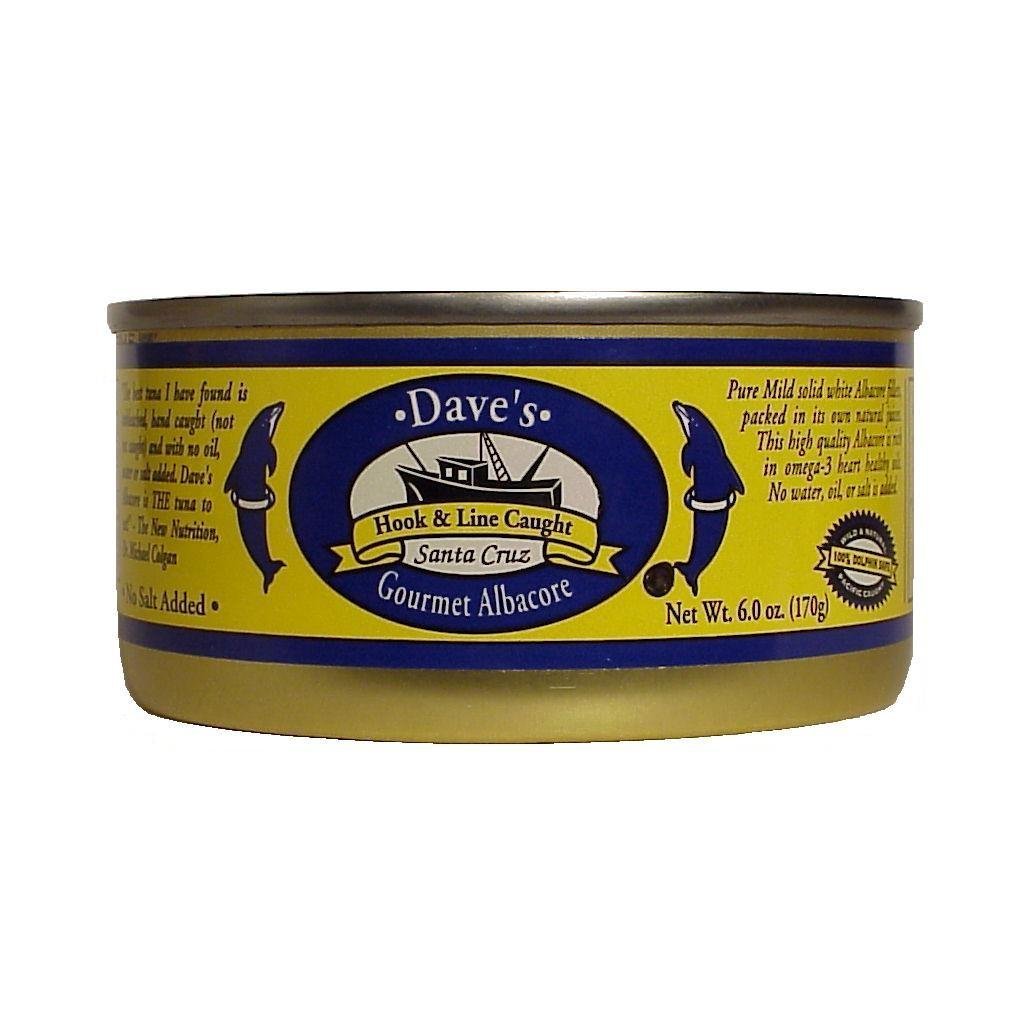 One of the most amazing discoveries in my tuna talent hunt was the cottage industry that has spawned in our own Pacific Northwest. Yes, if you’re looking for tuna packed in olive oil, the likely source will be Europe. But if you’re looking for a new kind of premium tuna—cleaner-tasting, fresher, less oily—you must look towards Washington, Oregon and, occasionally, California.

There have always been some consumers who did not like the greasiness added by packing tuna in oil. The American commercial industry felt their pain, and started packing much more of their tuna in water about 15 years ago. The consumer response has been enormous: today, 85% of the canned tuna sold in America is water-packed! People think they’re getting a more “healthful” product, though studies have shown that the differences in calories are negligible. And a difference of 7 grams of fat per serving is not going to change anyone’s life.

What’s not negligible is the difference in taste and texture. Tuna packed in water, to my taste, is almost tasteless. And the texture is much less attractive than the silky texture of a good oil-packed can.

Cognizant of the public’s desire for oil-less tuna, but ambitious to create a finer product, the tuna fisherman and canners of the Pacific Northwest have been rolling out oil-less cans of albacore tuna that do it a better way: the tuna is cooked only in its own juices with no water added at all. The flavor difference between this stuff and the supermarket canned tuna in water is extraordinary.

Along the way, the good people of the Pacific Northwest have adopted all the tenets of Tuna Religion. Their tuna is caught by trolling, with no nets that unwittingly trap dolphins. No coastal fish, but only fish from the open ocean, are used. The albacore tuna are hand selected, hand trimmed, and always Sashimi Grade. The tuna pieces are placed in the can (often by the fishermen themselves) with nothing other than a little sea salt—no oil, no water, no fillers, no chemicals, no hydrolyzed soy protein, no vegetable broth, no pyrophosphates to pump up the weight of the tuna (all of these additives, the believers say, are added by the commercial canners to their supermarket product). The tuna is cooked one time only, right in those cans. Commercial canners, because it’s so much easier, cook the tuna in large pieces outside of the cans, and can the tuna after that; there is an obvious loss of flavor when tuna is cooked that way.

The product you receive will likely be quite white—much, much whiter than the oil-packed European tunas. The best part about this tuna, usually, is that it tastes very fresh, sweet, mild. It will also be very firm tuna, which I don’t mind. But the worst part is that when you chew those firm chunks they often seem quite dry. But there’s a virtue in this: that firm dryness, when mixed with a ton of mayo, leads to the best-textured tuna salads I have ever tasted. As long as the tuna has enough salt (and almost all of these companies produce a salt-less variation, so watch out), you’re in for a real tuna salad treat.