Photo Essay: In a European Seaside Restaurant, The Best Whole Grilled Fish of My Life!

The best whole grilled fish I ever had? Come on. Could it be reasonable to make such a judgment? After the piscatory onslaught of my life…from the Cyclades, to Provence, to Goa, to the tiny islands off of Malaysia, to Native American planked salmon in Oregon? To freakin’ opakapaka right out of the water grilled on the coast of Kauai? And on, and on, and on…

Stop! Enough! In Spring 2010 I had a fish that clearly stood out from the pack as The Winning Swimmer of all time.

It was in Portugal, just south of Lisbon. It was in the fishing village of Sesimbra–which I had heard was a hot spot for great fish, both at the local fish market and in the local restaurants. The epiphany occurred during a meal with local winemakers, at a seafood restaurant right across the street from the ocean called Restaurante Ribamar. Yeah, we played with all kinds of shellfish to whet our appetites, but then came the main course: a very large, round fish (it fed eight), with reddish skin (like a red snapper) and the distinguishing feature of enormous eye sockets.

It was called imperadore, and it is certainly the emperor of my fish-eating lifetime.

I’ll let the camera tell the rest of the story: 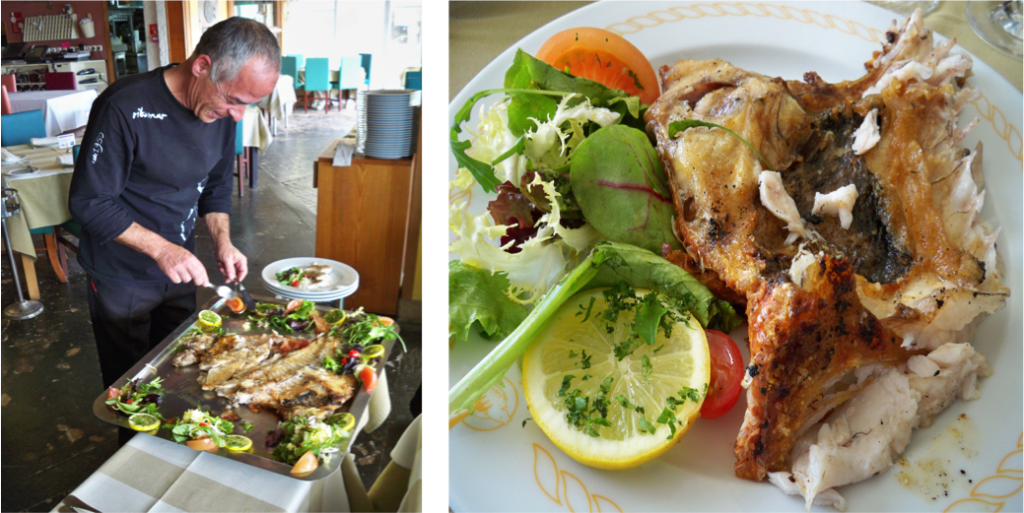