The Many Mysteries of Eggplant

Fruit or Veg?
Botanically, of course, eggplant is a fruit; it’s the presence of seeds within the “fruit” that does the taxonomical trick.

The Name? The History?
Most scientists believe that the eggplant originated in India in antiquity, and was first cultivated there over 4000 years ago—when, possibly, it was white and egg-shaped.  In Sanskrit, it was called “vatinganah,” which gave rise to later names. Around 500 B.C., eggplant was introduced into China, where different hybrids were developed, of differing colors and shapes. Eggplant stayed on the march between the 9th and 12th centuries, migrating to the Middle East (where it picked up the important name “al-badhinjan”, related to the Sanskrit name), Egypt, Spain (“alberginia”), and southern Europe (where the Provençals started calling it “aubergine.”) During this medieval period the eggplant was suspect; some thought it to be poisonous, since it was a member of the nightshade family (the medieval Arabic toxologist Ibn Wahshiya wrote in 904 A.D. that “eggplant is fatal if eaten raw.”). The Italians, who imported it in the 13th century through trade with Arabs, thought it would make you mad, and therefore named it “melanzana,” or “crazy apple.”

Apparently, it was an Englishman who, looking at one of the original white, ovoid cultivars, named the fruit “eggplant.” But today only Canada and the U.S. stick to the “eggplant” nomenclature; the Brits call it “aubergine,” the Australians call it “eggfruit,” and the South Africans call it “garden egg.”

How Many Eggplants Are There?
In preparing this research, I have come across literally scores of eggplant types. It’s nice to have them—particularly in high season, in the fall, when their differences are most pronounced (the fresher they are, the more they taste like themselves).

The most common eggplant by far in America has various names: Western eggplant, Globe eggplant, Common eggplant all have shiny, black-purple skin. One botanical variety of it that’s quite common is called the “Black Beauty.” All of these are usually large and elongated, with a big, round “globe” at one end. It is the eggplant that most Americans use for their eggplant dishes; the large rounds that are easy to cut from it are perfect, for example, for “Eggplant Parmesan.” 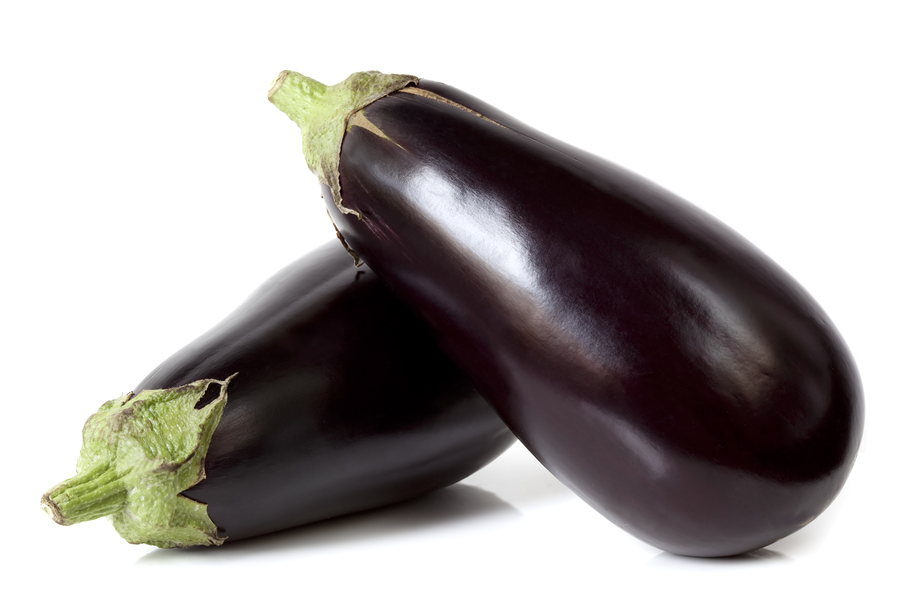 If the eggplant has the same proportions as a Globe eggplant, but is much, much smaller—like a miniature Globe—it is known as the Italian eggplant, which has more delicate skin, and a bit more concentration in the flesh. 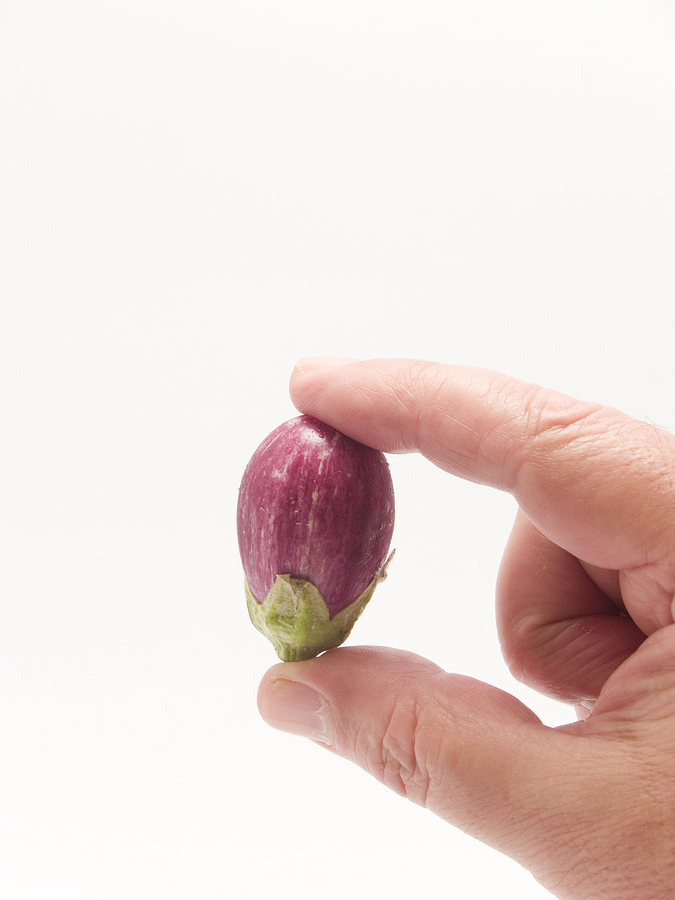 Another major player is the Japanese eggplant, a longer, thinner, variety which is usually water-color purple (though it can be lavender, pink, green, white or striated). I find it to be juicier than Globe eggplants, and a little less mucilaginous. 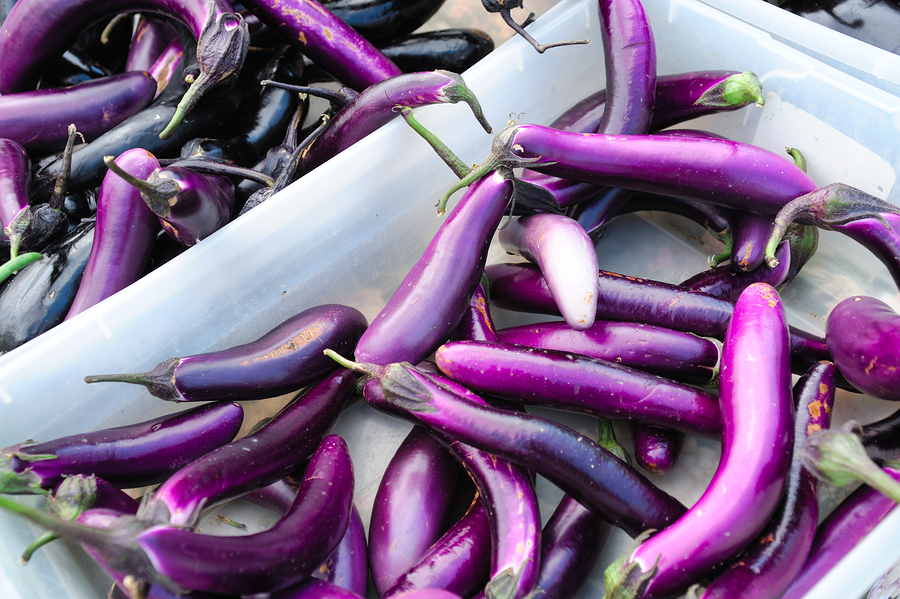 A related eggplant is the Chinese eggplant, which is straighter, light in weight, pale violet, and rather sweet-tender (containing fewer seeds). 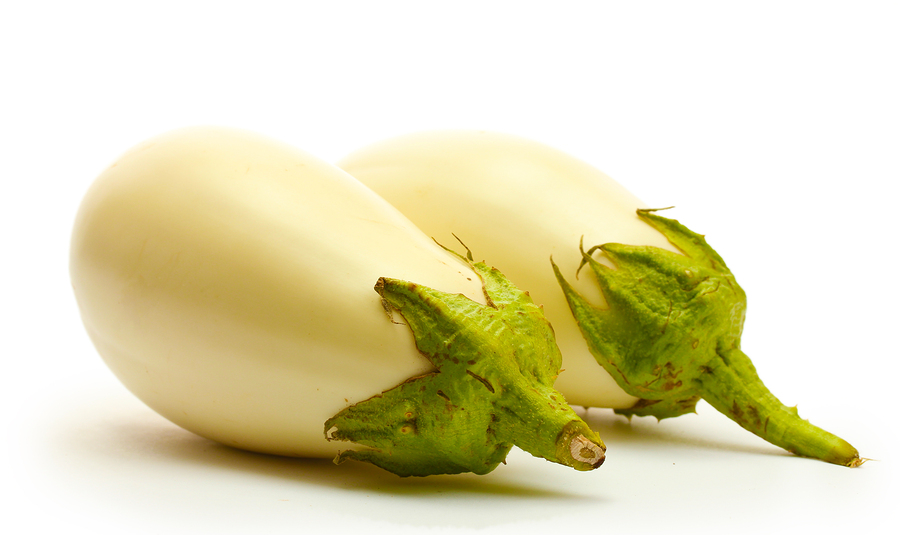 And you must familiarize yourself with one other type that is increasingly appearing at our markets: the unique Thai eggplant, usually the size of a large Lady Apple, with green striations on the outside. It is usually cut and cooked in Thai curries. But if you roast it, you will find the most extraordinary texture: lots of seedy “crunch,” but no bitterness, a remarkable sweetness and juiciness, a kind of freshness. It only lacks the “meaty” taste that European and American eggplants offer. I love these cooked in a 400°F oven for about 15 minutes, quartered, and topped with any variety of Asian sauces (from Thai green curry sauce to Indian korma to Vietnamese dipping sauce). 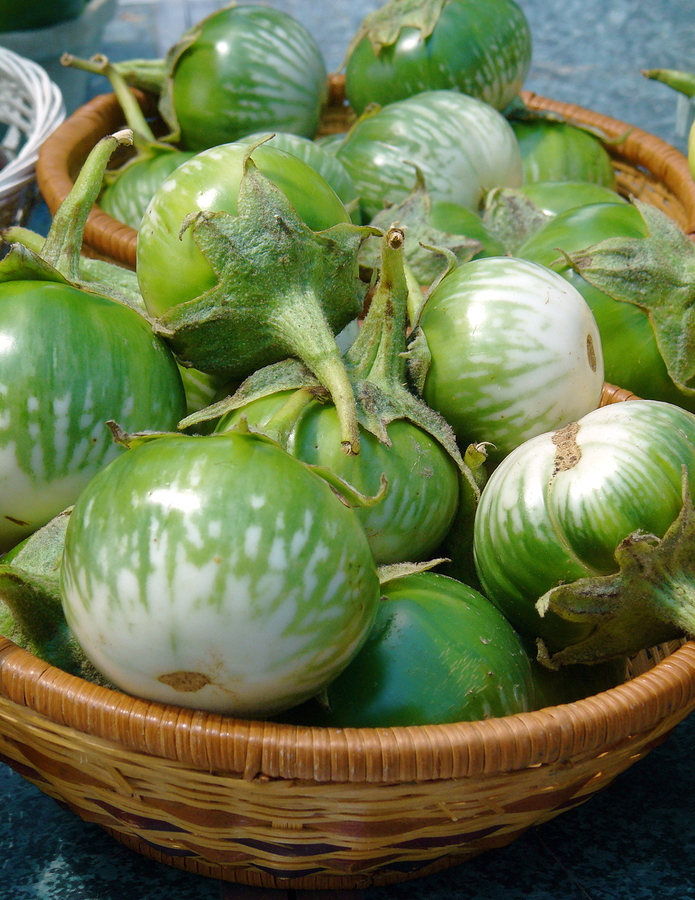 Why Does It Seem that Eggplant’s Always in Season?
Using the whole world as its garden, the American marketplace is able to provide year-round eggplant. And for many eggplant uses, eggplant from any season works just fine.

However, if you want to know the thrill of full-flavor, full-sweetness, full-juice eggplant…you must buy eggplant in season.

Eggplant is a crop that is rather sensitive to cold, much more so than other nightshades; the optimal growing season for eggplant is warm and long (about 80 days at 78 degrees, with the nights dipping no lower than 68 degrees). Peak season for eggplant in the U.S. is July-October. The most productive state, Florida, also harvests eggplant in December through January, and May through July. The second highest-producing state, New Jersey, and the third-highest producing state, California, both stick to the conventional Summer-Fall schedule.

So why is there plenty of eggplant in the market in February? Because that’s when imports roll in from China, from South America, from Central America—particularly from Mexico, which is a very important mid-winter supplier of eggplant.

Is Long-Shipped, Mid-Winter Eggplant Any Good? What Do I Look For? How Do I Hold It?
For so many eggplant dishes, less-than-spanking fresh eggplant will provide the texture, the weight, even a lot of the flavor of just-picked eggplant; eggplant combines so well with other flavors, that it’s not often easy to tell when a cooked eggplant in a casserole is not rippingly fresh.

That being said…you should always try to buy the freshest eggplant you can…simply because you will get more of everything. Eggplant, though it looks immortal, is thought to decline significantly (less sweet, less flavorful) within 7 to 10 days after harvest. At the market, you must look for firm, smooth, shiny eggplants, heavy for their weight. Avoid eggplants with dull color, brown spots, soft spots, or, especially, loose, wrinkly skin; this could be an indication of increasing bitterness inside.

When you get the eggplant home, put it in an unsealed plastic bag. The refrigerator’s okay for a couple of days, but most experts feel that a COOL place, not a COLD one, is likely to keep the eggplant better.

Salting or No Salting: The Tale of the Seeds
Many a cookbook will tell you that the most important thing to do in the preparation of eggplant is to slice it, salt the slices, place them in a colander, weight them for 30 minutes, and watch the bitter juices drain away.

Having tried this technique countless times, I usually find that I wind up with eggplant that has lower liquid content, no less bitterness…and that I’ve wasted about 45 minutes paying homage to old cookbook authors.

I was told a few years back that the salting and de-bittering once made sense, when female eggplants had lots of seeds—big, bitter, hard seeds. But cut open most any eggplant today: you will see far fewer seeds, and much smaller seeds. Why? This same source said that plant biologists have been working on the elimination of seeds in eggplant, the softening of seeds in eggplant, and have turned the fruit hermaphroditic—so modern chefs don’t have to sweat the “bitter, seedy” thing any longer.

By the way: the biggest and most seeds I encountered in preparing this article was in a small, green Thai eggplant—and I loved them! They were hardly bitter at all, and provided an amazing “pop” to the chew of the eggplant!

Skin Contact: Should I eat it? Should I peel it?
I love the M.F.K. Fisher quote concerning the peeling of vegetables in general: “all of them whether tender or hard, thick-skinned or thin, die when they are peeled…even as you and I.”

And I would die, in most cases, if you took my eggplant skin away from me! It adds such color, flavor, texture, nutrition. For most types of eggplant cookery—such as sautéing slices, or braising chunks in a casserole, keeping the skin on is entirely appropriate.

The only time you should ask the peeling question is when you’re exposing a whole eggplant to hot temperatures for a long time. If you grill a whole eggplant, depending on how long you grill it—the skin may turn hard on you. Ditto for a roasted eggplant. Just keep monitoring; most eggplants reach softness inside before the outer skin turns brittle.

Eggplant and Oil
Good cooks know about the “eggplant-and-oil” problem: if you sauté slices of eggplant in oil, they will suck up that oil like nobody’s business. Then you’ve got cooked eggplant slices that are just too oily for most people.

However…if you roast a whole eggplant in a 400°F oven for about 20 minutes, it will soften considerably; depending on the size, it may just cook through. After you remove it from the oven, and slice it, it may be ready to eat. OR…you can THEN cook the softened slices in oil, at which point they will pick up much less oil.