The Unheralded Joys of Umbria 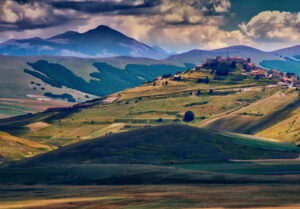 Italy’s central province of Umbria is extraordinary in many ways.

One of them is NOT in the amount of publicity it attracts.

Next-door Tuscany—so similar in many ways—has won that game. For over 25 years now, Tuscany, to Americans, has been the glamour girl, the “it” province, the place Americans want to visit for their summertime villa rentals. Are you starting a stateside Italian restaurant ? Just name it “Tuscan Something-or-Other,” and they will come, no matter what you’re serving (eggplant parmigiana, anyone…not Tuscan at all?) Merely say “Tuscany” and you can go to the front of the line at Dean & DeLuca.

And yet, Umbria has similar landscape, similar history, and, most importantly, it’s not overrun by Yanks and Brits on vacation in Chiantishire. Still, no buzz whatsoever.

And then there’s the food. 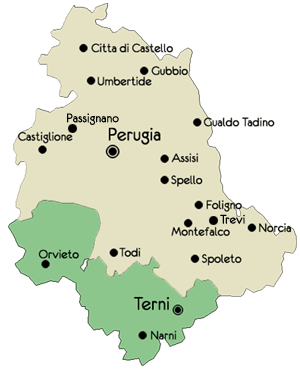 Of the former, I don’t have good things to say in Tuscany. The tradition there (not carried out everywhere today) is to include no salt in the bread, making the bread bland to an extraordinary degree. Umbria, though, is where I’m used to savory, delicious loaves, salt included!

Then there’s olive oil, the very heart of Tuscan pride. It has earned for its reputations for being a rich, spicy, green oil with a long burn in the mouth. And I love it! But, the prices of Tuscan oil have gone insane…while fewer dollars can get you a bottle of similar quality from Umbria. The style is the same—oil made from green, under-ripe olives, which is what gives this kind of central Italian oil its kick—but Umbrians believe the quality level of their oil is dead alike, if not higher. Look for oils produced in Umbria around the towns of Spoleto, Trevi, Montefalco and Assisi.

The fact of the matter is that Tuscany does not have a high reputation, among Italians, for its regional cuisine. It’s not bad, to be sure, but it is simple, much more simple than many of Italy’s regional cuisines. Californians started to embrace Tuscan food at the height of their own grill-mania because there’s a lot of grillin’ goin’ down in Tuscany as well. And so began the American worship.

The adulation could have gone instead to quieter, more subtle Umbria, just inland to the east. The best grill food I ever had in Italy was in the town of Assisi. Just outside of that holy, humbling town, on a windswept November night, we found an old horse barn that years ago had been converted into a restaurant called La Stalla (i.e. where the horse stalls were). Inside was one large room, with dim ambient light—except for a wide, roaring fire at the center of the room. Grates covered the fire—and a wide range of meats (plus the fabulous melting cheese scamorza) were covering the grates. The menu simply named which meats were available from the grill and, if you were wise, and part of a large party, you pointed at every one. I’m not sure that the quality of those meats and the exquisite skill of that grilling could be topped anywhere. Okay, the surroundings had something to do with it, but score one for Umbria. 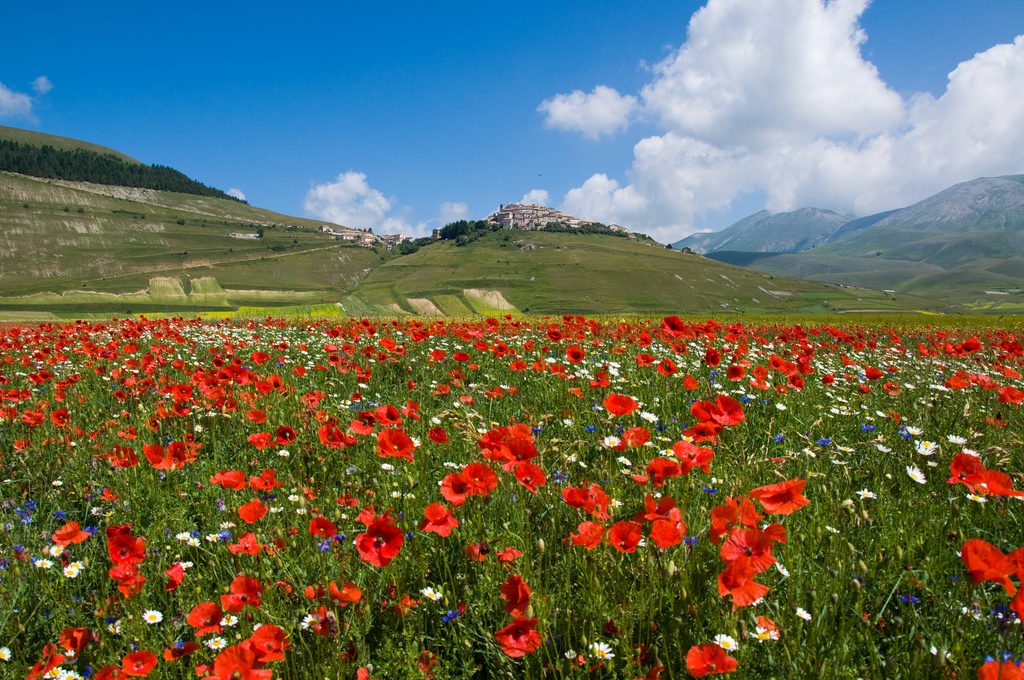 Of course, Tuscany, in a regional shoot-out, is more than just grilling. There’s beans! Tuscans have traditionally been mocked by other Italians for their lack of pasta enthusiasm as cooks in Tuscany often replacing that most Italian of carbs with beans, a substitution which earned the Tuscans the disparaging name of mangiafoglia (bean-eaters)! But cross the regional border and you come across a dried pulse that is truly outstanding: the lentils of Castelluccio! I have compared them to the famous French lentils, from Du Puy, and have found these Italian ones superior! Tighter texture in the tiny lentils, plus more earthy flavor. Once, in an Umbrian town near Castelluccio, I was served a warm soupy bowl of them with a slice of grilled bruschetta floating in the center, drizzled with local olive oi. Magnificent. 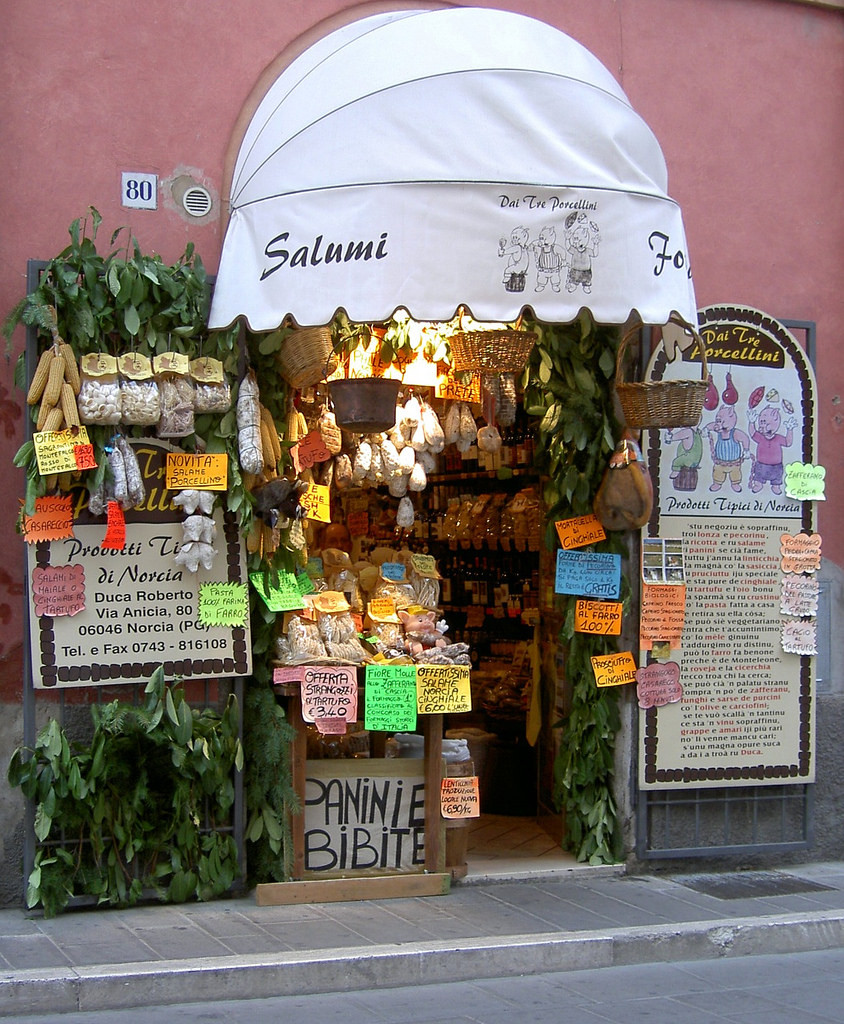 And then we come to salumi, the antipasto staple of dinner tables all over Italy. There are a few cured meats associated with Tuscany and respected! But nothing compares with the worship accorded to a wide range of pork and wild boar items prepared in and around Umbria’s magical eating town of Norcia. In fact, the salumi from Norcia is so revered that quite a few salumerias in other parts of Italy refer to themselves as norcinerias! It is a cross-regional tribute that is rare indeed in any part of gastronomic Europe.

And as if Norcia weren’t heavenly enough just from its salumi—man does not live by salumi alone!—Norcia also happens to be the epicenter of other crazy good Umbrian eats. Castelluccio, the lentil capital, is just outside Norcia. There are some truffles in Tuscany—surprisingly, a variation of white ones, near the town of San Miniato—but it’s Norcia that has the huge truffle reputation for its black ones, reportedly the best in Italy. And for dessert? The world has not yet discovered the crunchy chocolate of Norcia, but that flood of worship can’t be far off.

In fact, I would call Norcia the most exciting eating town in either Umbria or Tuscany. Yeah, I know, they have some good stuff over in Florence. Can’t deny it. Tuscany has it over Umbria, food-wise, in the fancier, more creative restaurants of Florence. Me? I don’t go to Italy for that kind of food anymore. I go for the best local products, turned into the best traditional dishes. I go to Norcia.

Of course, gastronomically speaking, there’s one more playing field for comparison: the vineyard. 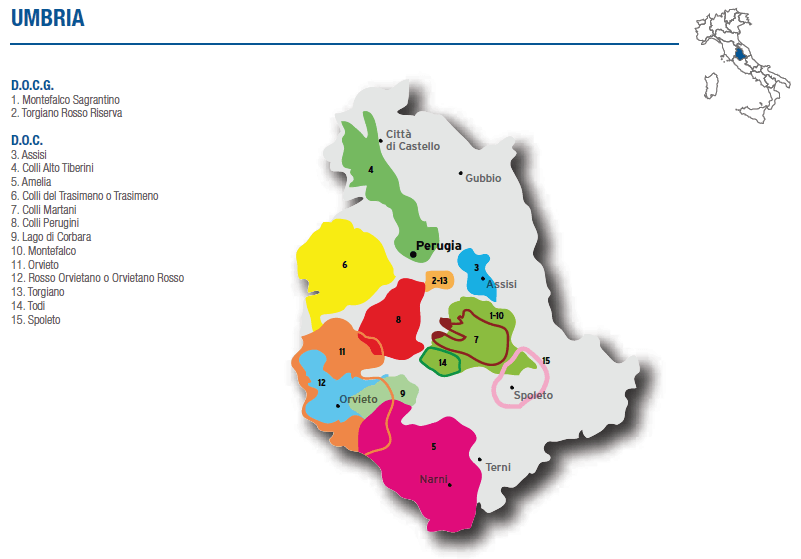 Every wine-lover knows that Tuscany is the home of fabulous red wines, from traditional (like Chianti) to modern (like the super-Tuscans). But neighboring Umbria produces many of the same kinds of wines, often using the same grape, Sangiovese, as a base. Altogether, there are 13 different denominazione di origine controllata (DOC) and two denominazione di origine controllata e garantita (DOCG) spread around the region. I’m not saying Umbrian reds are better, but they are damned good. There is a classic Umbrian red, not so well-known, that breaks out of the Sangiovese-grape rut; it’s called Sagrantino de Montefalco DOCG, which makes wine that’s usually darker and more tannic than Sangiovese. I’m not particularly enamored of those qualities, but I do love the fact that this richer, more tannic Sagrantino ages into something magnificent! Montefalco, by the way, ain’t far from Norcia! Two other wines of note from the area are Rosso di Montefalco DOC (often a blend of Sangiovese and Sagrantino with other grapes added in) and the 100%-Sagrantino Montefalco Sagrantino Passito DOCG.

Tomorrow, I will tell you about an everyday wine from Umbria that I love with food…