Croatia: The Pearl & Pearlettes of the Adriatic

While most people think summer when they think Croatia, October is a wonderful time to visit. The weather is beautiful (low & mid 70’s during the day) and the sea is still warm enough for swimming. The natural beauty is still extraordinary; the history and culture are still rich; and the gastronomy scene is still amazing with the added bonus of October food festivals in both Split and Dubrovnik.  And perhaps the biggest bonus of all: the crowds are gone. When you talk about Croatia, you have to talk about food because Croatia is now known as a gastronomy destination that celebrates inventive cuisine, Michelin stars, local olive oils and local wines.

I spent 12 days in October on the Dalmatian coast starting in the historic city of Split, Croatia’s second largest city located directly on the Adriatic. Its most famous monument, the Diocletian Palace, is considered one of the best preserved Roman monuments in Europe. Both the palace and the surrounding historic district are designated as a UNESCO World Heritage site (as are many sites in Croatia). A walk there is like a walk through Old Rome, but alive with shops and restaurants of today.

Just up the Adriatic coast are two more examples of charming historic centers. I visited Trogir, a small village, and Sibenik, a larger town. Both have spectacular old quarters filled with winding streets and narrow alley ways that surprise. They suddenly appear out of nowhere and almost always, if followed, lead to the sea.

Croatia is considered part of Central Europe and is comprised of the mainland plus many islands.  Among the most popular are Hvar and Korcula where I spent 2 nights each. They are easily accessible by ferry or catamaran from Split. The main difference is the ferries can accommodate cars and passengers, while the catamarans only carry passengers, no vehicles. They are both open to the public and run year round but with more limited schedules after the summer season.

I took a catamaran from Split and in an hour landed on the gorgeous island of Hvar. Adjacent to the harbor, is the main square, one of the largest in Croatia and  affectionately known as “the living room” because so much life happens there.

Tucked behind the square and up a hidden staircase was one of my favorite restaurants, Black Pepper. The setting and the food were unique. The restaurant sits in a narrow alley that is essentially a long staircase ultimately leading up to the medieval fortress at the top of the hill overlooking the sea below. Black Pepper sits on a portion of the steps with tables creatively placed on stair landings. But the real creativity is in the food. The signature appetizer, a tuna bruschetta, was a show stopper!  Pieces of tuna marinated in soy sauce sat on top of home-made bruschetta with tomato jam, capers and caper flowers from their garden, garlic cream and black balsamic pearls. Hollandaise on the side.

The truffle pasta (with truffles from the Istrian peninsula) was tossed with bits of beef marinated in dijon and topped with cherry tomatoes, black 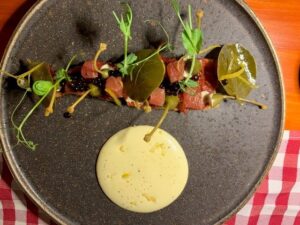 truffles & parmigiana. Another wow dish. The white wines were local from Croatia: a dry Posip from Korcula and a Malvaziga from Istria.

If you head back down the staircase and follow the sea walk to the right, you’ll find  a wonderful place to stay, The Adriana Hvar Spa Hotel where I spent 2 nights in a charming room with a huge patio overlooking the sea. While the hotel is located right on the harbor, it is away from the hustle and bustle of the main square. Continuing around the bend, are swimming areas with ladders descending from the rocks to provide easy access for a swim in the sea.

What is a trip to Croatia without at least some island hopping?  So, I boarded another catamaran that took me from Hvar to Korcula, a breathtaking island in southern Dalmatia with another spectacular old town center. Lots of interesting nooks and crannies and shops and restaurants to explore.  A distinctive architectural feature of Korcula are the bridge ways you find yourself walking under. They were originally constructed to connect the medieval houses on either side of the narrow alley.

As for the gastronomy scene, the real star here is LD Restaurant that boasts1 Michelin star and outdoor dining overlooking the sea. I was incredibly fortunate to eat there twice. The red snapper sashimi appetizer was not only amazing – but a piece of art. The snapper, cured with cherries to give it a red color, sits on a bed of lemon cream, topped with capers and surrounded by a cucumber gazpacho sauce.

Another wow dish was their signature prawn gyoza. To call this an amazing piece of art, does not do it justice. It was almost too beautiful to cut into. Black squid ink dumplings filled with chopped prawns are artfully decorated with white sesame seeds, thin circles of white daikon radish, and wisps of pink & blue mountain flowers— all on top of a yellow mousseline sauce. 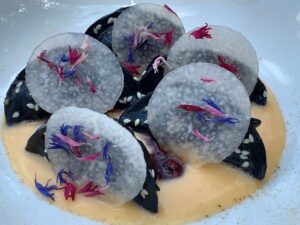 The wines were from local vineyards on Korcula, the Istrian peninsula, and Plesivica, a small village in the north near Zagreb.

The LD Restaurant is part of The Lesic Dimitri Palace hotel – the only 5 star and Relais & Chateau property on the island. It has 6 apartments and I stayed in one of them with a private outdoor patio and a full kitchen. But I can’t imagine cooking on this island filled with such great restaurants, as LD in the old town and NIgra in the newer part of town. And if you’re into history, the hotel is just around the corner from Depolo street, where Marco Polo is said to have lived. Some say he was even born there, but others argue it was Venice or Istanbul.

For a more rustic, country setting amongst the olive groves, try the delightful organic farm restaurant called Eko Smog. Lunch starts with several varieties of home made grappas and some of the best bread I’ve ever tasted with 3 different olive oils for dipping. The lunch is cooked and served by family members who are carrying on the tradition of harvesting olives and running the farm. The zucchini dish with young goat cheese and pumpkin seeds was a definite winner.

Another catamaran ride took me to my final destination: Dubrovnik, a stunning city on the Adriatic. When you first step across the drawbridge into the old city, it’s like entering a fairy tale. The historic quarter is incredibly well-preserved and surrounded by the famous walls and of course, the sea. I immediately understood why it is deservedly called the “Pearl of the Adriatic”.  But, in all fairness, I have to think of all the other beautiful places along the coast that I visited as the “Pearlettes”. 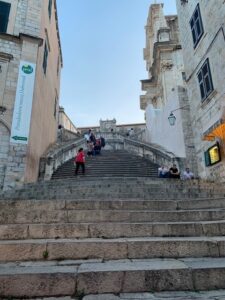 Jesuit Staircase or Walk of Shame from Game of Thrones, Dubrovnik, Croatia

The week-long Good Food Festival was in full swing with wine tastings, workshops, cooking classes, gastro tours and restaurants offering special menus at reasonable prices. I ate my way through the alleys and hidden streets of Dubrovnik.  To reach one restaurant, I climbed the old Baroque staircase, the Jesuit staircase, now known as the Walk of Shame, thanks to the iconic scene from the filming of Game of Thrones.

My three-day gourmet extravaganza started with a delicious black risotto with cuttlefish at a delightful restaurant called Lucin Kantun. It was followed by a “main dish” of baked octopus with chickpeas and cherry tomatoes. The next day, at Arsenal restaurant, I had delicious Ston oysters from an oyster farm south of Dubrovnik and a breast of duck with a mascarpone and semolina sauce.

A guided gastro tour the next night, took us to several restaurants, including Tavulin, where we sampled a creamy barley with shrimps and Pag cheese — now one of my favorite cheeses ever! It is a sheep cheese from the island of Pag, somewhat similar to manchego. At Kopun, there was an excellent traditional dish called “dirty pasta” – a beef pasta seasoned with cinnamon and nutmeg, causing the color to look “dirty”. This was followed by a traditional Dubrovnik capon with a porcini mushroom sauce based on a recipe from the 19th Century. 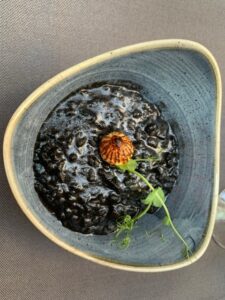 The Good Food Festival happens every October.  One of this year’s highlights was a special 5-course dinner created by the celebrated chef of Dubrovnik’s Restaurant 360 which has 1 Michelin star.

As for accommodations in Dubrovnik, the choices are endless. I stayed 2 nights in the heart of the old city at the Pucic Palace, an elegant, baroque home from the 17th century with modern amenities. About 15 minutes outside of the walled city is the Bellevue, a spectacular modern hotel perched on a cliff overlooking the Adriatic and a pebble beach below.  I stayed here 1 night and took advantage of the elevator that drops guests on the beach. The hotel is also home to a Michelin-recommended restaurant called Vapor with amazing food and views from an expansive outdoor terrace.

The Dubrovnik airport is not far, but if you want to add one more destination to your itinerary, try Cavtat, the picturesque, medieval town and former fishing village on the Adriatic only ten minutes from the airport.  I stayed there my last night at the newly renovated Supetar Hotel which is absolutely charming. Located directly on the harbor, it is in – you guessed it – the historic quarter. More narrow streets and staircases to discover. Another Pearlette of the Adriatic!