Marie-Inès Romelle’s Champagne Is Bringing Change to the Industry

In 1995, 16-year-old Marie-Inès Romelle dropped out of high school to work full-time and help support her family, who was struggling to recover from the death of her father, Césaire. Ten years later, she became founder and CEO of her own champagne label in Ecueil, France. By 2018 she had sold more than 10,000 bottles and is now working to expand distribution to the United States.

Romelle is the first woman of color with her own label in Europe, named Marie-Césaire after each of her parents. Her success is a leading milestone in women winemakers’ efforts to change the male-dominated champagne industry. In 2017, Food and Wine reported that women barely accounted for a double digit number of the 5,000 growers in the Champagne region of France. Eventually, the population of women growers grew to account for 14 percent of the industry, according to a study from Harvard Business Review (like 7th-generation winemaker Sophie Gonet of Champagne Michel Gonet.)

But the success and continuing growth of her own wine label is not the only thing that makes Romelle a revolutionary in her field. The story behind Champagne Marie-Césaire is a break in the industry’s centuries-long history of elite, large-scale champagne houses run by generations of wealthy white men, passed down from father to son. Some historic labels, like Bollinger and Clicquot, were actually founded by women, but as their production grew, the reigns were quickly taken over by men, eventually leading to the acceptance of vineyards and wine cellars as spaces only for working men.

Romelle made a space of her own in the industry without a generational legacy in champagne. She was born in the Caribbean on the island of Guadeloupe and immigrated to France with her parents and five siblings when she was only three years old. She grew up in Grigny, one of the poorest towns in France. As of 2018, almost half of Grigny’s population lived below the poverty line, which is mostly made up of West African or Afro-Caribbean immigrants who are crammed into run-down and notoriously dangerous apartment complexes.

Unemployment is rampant, but as an 18-year-old single mother, Romelle found a way out. She stumbled upon a passion for champagne while working at a delicatessen in the Orly airport and began studying different brands and tastes, poring over the intricacies of the wine industry. She was soon promoted to manager and eventually took over five different store locations. After going back to school and receiving an MBA from the University of Reims, she happened to meet a winemaker with a vineyard in the renowned champagne village of Ecueil, who she identifies only as Mr. Lefevre. He became a mentor to her, giving her necessary training, encouraging her to work in the vineyards herself and participate in every step of the winemaking process, from harvesting the grapes to the first fermentation. 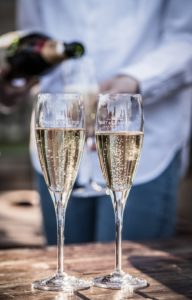 Romelle soon developed her own grape blends, flavor profiles, and aging techniques and debuted Champagne Marie-Césaire with her brother and business partner, Jaïro. The Cuvée Brut Premier, Cuvée Brut Sélection, Cuvée Rosé Sec, and Cuvée Blanc de Blancs that they produce are each authentic champagnes that honor tradition, using only grapes approved by the Appellation d’Origine Controlée (AOC), France’s strict set of regulation standards for true champagne. All four of Romelle’s champagnes are made only from different blends of Pinot Noir, Pinot Meunier, and Chardonnay grapes. But Romelle doesn’t let tradition and authenticity overshadow her own innovations. She makes each champagne uniquely hers with a secret touch of cane sugar to honor her roots in Guadeloupe. Like many island nations in the West Indies, Guadeloupe is a major producer of sugar cane, the native crop used to make sugar and rum. Romelle’s use of cane sugar in her wine creates a fuller flavor and adds a lightly tropical aroma, which she says makes it the perfect drink for a celebration.

Motivated by a blossoming love for all things champagne and a tenacious desire to provide for her growing family, Romelle’s rapid ascent from store manager to brand CEO makes the path to becoming an established winemaker seem somewhat simple. Once she put in the work to educate herself, she was rewarded with the success of her label. But there have been many obstacles to overcome along the way. The biggest challenge of being a woman in the industry, and specifically an Afro-Caribbean woman, is to find a place for yourself, Romelle explained in her native French. She had to work twice as hard to establish her legitimacy and to demand that others take her seriously. Although both women- and black-owned wine labels are becoming increasingly popular, especially in the United States, women of color breaking into the industry still have to face the reality of stereotypical thinking and closed-mindedness.

Ntsiki Biyela, founder of Aslina Wines in South Africa, echoed Romelle’s sentiments about the quality and legitimacy of her wines being constantly scrutinized. When Biyela debuted her label in 2016, she became the first black woman winemaker in South Africa. She admits feeling self-conscious of people questioning her presence in the industry, the strange looks that always asked, “What are you doing here?” She believes that this struggle to be accepted is rooted in racism.

“If you look at black people, we have grown up being looked at as the inferior [race]. We’ve been undermined and underestimated,” Biyela said. “But we are capable beyond measures and the world needs to change.”

Like Romelle, Biyela doesn’t spend much time focusing on the negatives of forcing change in an age-old industry. Instead, she chooses to celebrate the power of education and making meaningful connections among both colleagues and competitors, which allows other women in the industry to “see and be seen,” as Biyela said. The inclusivity she found among other winemakers while attending industry conferences and awards presentations can also be encouraged through the many networks of women that have been formed over the past several years. Collectives like La Transmission and Les Fa’bulleuses de Champagne, for example, are working to change the male-centered culture of champagne. But the overwhelming majority of women who form and advance these collectives are white, which will hopefully continue to change with the presence of more winemakers like Romelle and Biyela.

Although Romelle hopes that the long-term effects of her success will challenge other minorities to believe that anything is possible for them, she is already sending ripples of change and inspiration across the world. In 2016, Shayla Varnado launched an effort to include black women on the consumer end of the wine industry. The community she built, the Black Girls Wine Society, is directly affected by the growing visibility of women like Romelle.

“It makes my efforts towards inclusion feel so worth it when I see wine producers of color succeeding,” Varnado said. “Nothing makes me happier than to see another person of color winning in an industry where we’ve been ignored for so long!” 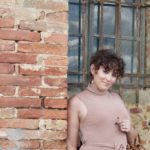 Carmen Russo is a freelance food writer based in New York City. Her work has appeared in publications like Saveur, Slate, Food52, and Broadly. She is passionate about using food to tell stories about identity and culture, and you can find her on Twitter and Instagram as @carmenjrusso.