A Chamomile Cocktail for the Season (Whatever that May Be) 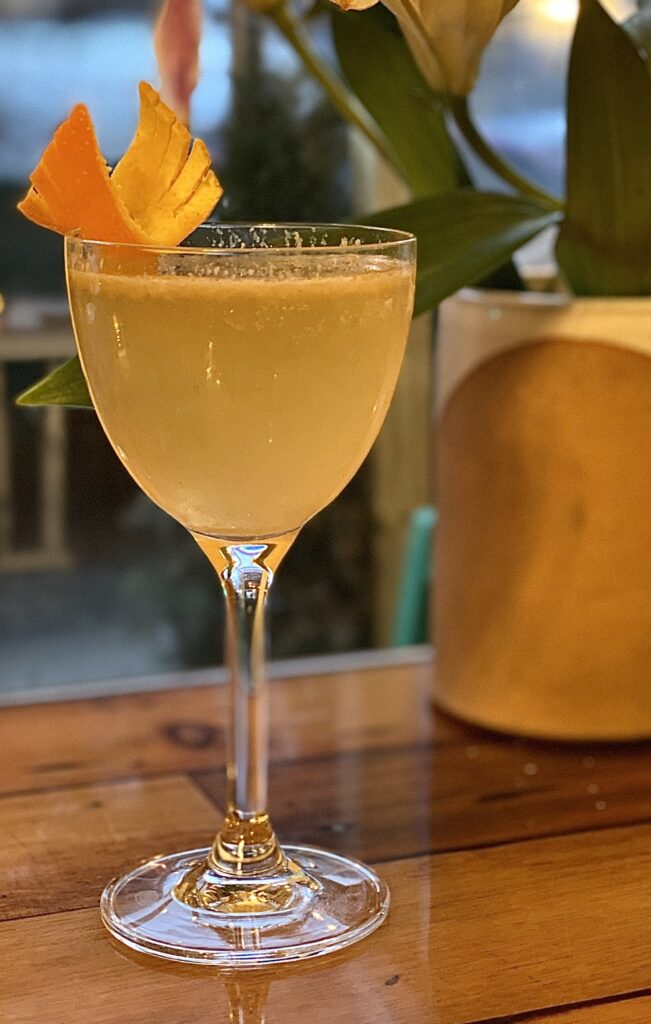 There are no robins. At least not in New York—at least not yet. No fountains or forsythia, cottontails or crocuses, or dappled hills of daffodils. The clocks aren’t even sprung ahead. Still, I have a friend whose birthday falls on March 1st who insists she has a spring birthday. It makes me wonder if she’s ever actually experienced it. Of course we live in times when cobweb-decked halls turn to tinsel before turkey, rosé allocations are gone before the groundhogs, and pumpkin beer gets portioned under poolside parasols. This said, March 1st is March 1st, and here in New York, it’s still undeniably winter.

While I think it’s insane to put holiday lights up in October, it’s somewhat tougher not to project toward spring in early March. I feel the same way about cocktails. I’m definitely not shaking drinks with pine and clove before leaves are in the bag, but come late winter, I start thinking about flavors that anticipate sunnier times. This doesn’t mean watermelon and blueberries. I’m always an advocate for reserving fresh ingredients for when seasonally appropriate. There are ways to straddle that line though, and a winter of outdoor dining has proved inspirational for the season to come.

I’ve never served as much tea as I have this winter. While heat lamps are helpful, they go only so far toward keeping people warm. Tea, herbal or otherwise, has picked up this slack, with calls for chamomile well-surpassing all others. Rightly so. Chamomile is calming, warming, and above all, delicious. It’s floral, but not in a decorative way—you wouldn’t use it as a perfume or in potpourri. Its context is decidedly culinary, with an earthy, honeyed, and lightly tropical flavor profile that lends itself to sweet as well as savory applications. Its versatility is a significant part of its appeal.

I love using chamomile in cocktails this time of year, both for its comforting warmth and springtime freshness. This March I’m incorporating it into a syrup, paired with vanilla bean and demerara sugar. The demerara has a soft richness to it, without the overt molasses character of light brown sugar, which can easily overpower chamomile’s subtleties. Its depth also helps integrate the more savory aspects of the vanilla with those of the flowers.

As a base for the cocktail, I’m using equal proportions of Old Tom gin and agricole rum. Greenhook Ginsmiths Old Tom is a floral, spicy, and fuller-bodied gin, rested for two years in bourbon barrels, and finished in Oloroso sherry casks. Rhum JM VO is an agricole rum aged for three years in a combination of both new oak barrels and ex-bourbon casks, again adding richness and depth. Agricole rum distinguishes itself from traditional rum in that it’s distilled from sugarcane rather than molasses. As a result, agricole rums tend to have fresher, more floral and vegetal aromatics and flavors. I like the blending of Old Tom and aged agricole for this cocktail, as they serve to accentuate many of the characteristics of chamomile that I described above. And a touch of passionfruit liqueur rounds everything out, showing deference to chamomile’s more tropical side.

And who couldn’t use a tropical touch about now? While New York may have its lions in early March, even robins seem about as fanciful as phoenixes. Until they arrive, let this cocktail be your guide.

Combine ingredients in a tumbler. Fill with ice, shake, and double strain into a chilled coupe. Garnish with feathered orange twist.

*To prepare the syrup, combine one cup of water and one cup of demerara sugar in a pot. Add ½ cup of dried chamomile flowers, and the scraped insides of two vanilla beans, along with their husks. Heat until the vanilla and sugar are integrated and dissolved. Cool and fine strain for sediment.