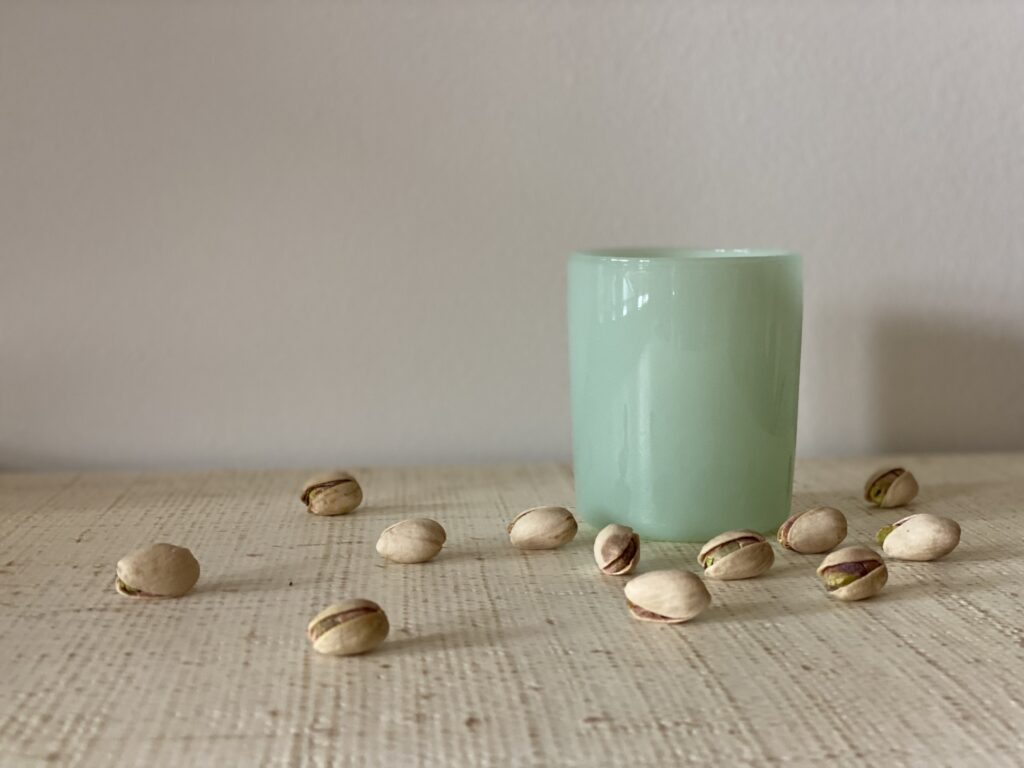 Say it’s 1979. Say you’re a little boy, and all the older kids are eating brightly colored ice cream cones. Say that you’re familiar with chocolate, strawberry, and vanilla, but there’s a green scoop you’ve never seen before that captures your imagination. Say your mother lets you try it, despite her protests that you’re probably not going to like it. Say that you don’t actually like it—you love it—and somehow you spend the rest of your life attempting to reimagine that moment in various culinary contexts.

Such is my infatuation with pistachio.

A similar thing happened with the first wine I ever tasted. I’d begged my mother for a sip of what she was drinking (I was significantly older this time), and she finally succumbed, again insisting that I wasn’t going to like it. Oh, how wrong. It was like a mouthful of wildflowers! When as an adult I tried to describe what I was searching for, it took a number of attempts before one astute wine salesperson finally led me to a Gewürztraminer. There was no doubt: this was what my mother had been drinking.

I share this anecdote because there’s a commonality here. Given my palette’s proclivity to more overtly fragrant cuisines, my early attraction to pistachio makes sense: it’s the Gewürztraminer of nuts. Both pistachio and Gewürztraminer are exotics in their realms—unmistakable in character, with unique and opulent aromatics. Go look up dessert recipes with pistachio, and you’ll see that they frequently call for rose as a compliment (a classic tasting descriptor for Gewürz, which, in German, translates to spice or seasoning). It’s just such a pairing that inspired the cocktail recipe below.

Specifically, the drink I’ve made here is based on Turkish delight, a confection commonly composed of rose-flavored gelatin with chopped pistachios and powdered sugar. It’s spicy, sweet, and because of the nuts, somewhat savory. It’s also unlike any other dessert I’ve ever tasted.

To capture these qualities, the star of the cocktail is homemade pistachio milk. If this sounds daunting, let me reassure you. It’s actually incredibly easy to make, and so delicious that you’ll find yourself preparing it to drink on its own. Of course any nut milk can be made as simple and straightforward as desired, but for this recipe, I’ve really dialed up the aromatics and spice. Aside from pistachios, I use honey to sweeten, sea salt for savory balance, and vanilla and white cardamom for their aromatic integrity. The result is an ethereal, pale green liquid, such as one might conceive being consumed in the palaces and pleasure domes of the heavenly spheres. It’s really something else.

To further enhance the spiced element, I use gin as the base spirit for the cocktail. My preference here is for Caledonia Spirits “Barr Hill” gin, a gin distilled in Vermont from honey. Along with a compelling blend of botanicals, there’s a textured smoothness to this spirit, accompanied by a lightly honeyed richness. I also use a small measure of pear liqueur to add fruity roundness, along with jasmine liqueur and rose water for further floral dimension. A touch of lemon lends acidic balance to the overall softness of the cocktail.

For a drink that already has so much going on, is it too much to say that I also like to atomize the glass with absinthe? Perhaps. But in saying so, I can’t help but recall artist Julian Schnabel’s derision of people who criticize Frank Gehry’s architecture as being too outlandish: “That’s like going to see Coppola’s Apocalypse Now and saying, ‘I really didn’t like Robert Duvall’s performance. It was so over-the-top.’”

Obviously, in both instances, over-the-top is the point. For every generic stucco box erected, there’s a bar out there with watery Pinot Grigio by the glass. If these offer you pleasure, by all means partake. Don’t get me wrong—I appreciate thoughtful simplicity and aesthetic minimalism. But all these years later, I still take comfort in knowing there are delights in the world that challenge my sensibility and capture my imagination.