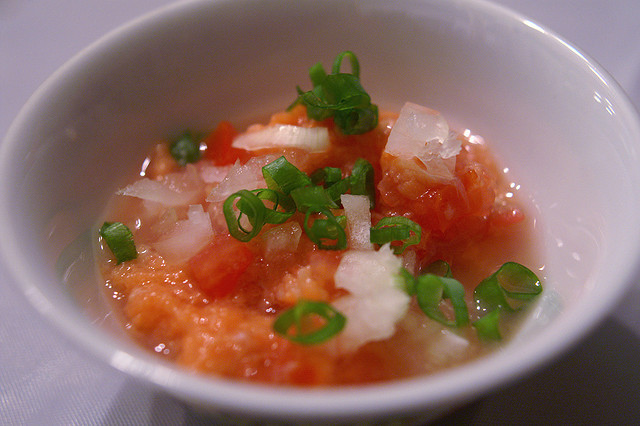 Attend any luau in the state of Hawaii today, and you’re sure to encounter a curious side dish called lomi-lomi salmon. The name comes from the Hawaiian word “lomi,” which means to “work with the fingers;” indeed, you can get a lomi-lomi massage at your spa in the afternoon, and have lomi-lomi salmon for dinner! It was made in Hawaii, historically, with salted salmon, which was brought to the islands in the 19th century by Russian sailors en route from Alaska. This is like the salted salmon from Alaska that, in New York City, became lox!

The Hawaiians would soak the salty salmon, then “massage” it with their fingers, adding tomato and onions as they went. Since it’s not easy to find salted salmon anymore, I like to “massage” the dish in the other direction—that is, to rub some salt into raw salmon. Also, as a kind of throwback to ancient Hawaiian practice—centuries ago they added waxy candlenuts to raw fish—I like to sprinkle crushed macadamia nuts over the lomi-lomi salmon, which adds a little crunch. I think the dish is absolutely at its best when it’s made at the very last minute. So if you’ve tasted it at a luau (for which it’s made hours in advance) and not been impressed—please try making this recipe at home. If you’re a sashimi maven, you’re going to love it. I would, however, advise avoiding the “side dish” concept; it works great as a light, refreshing starter.

1. Place the salmon in a mixing bowl, and, working with your hands, rub the salt into it, distributing the salt evenly. Season to taste with freshly ground black pepper.

2. Drop the cherry tomatoes into boiling water until their skins split, about 30 seconds. Remove tomatoes. Remove skins and discard. Slice tomatoes in half, and scoop out the seeds and pulp of each half. Discard. Chop remaining flesh finely, and add to salmon, along with minced scallions. Rub the salmon with your hands, distributing the tomatoes and scallions evenly.

3. Divide among 4 appetizer plates. Top the lomi-lomi on each one with 1/4 of the macadamia nuts. Serve immediately.