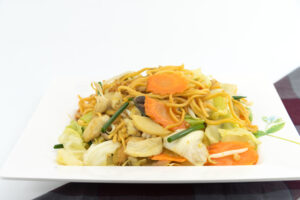 There is almost nothing authentic about chow mein; there is almost nothing even Chinese about it. But the dish that became emblematic of Chinese-American food in the 1950s—an almost stew-y mass of celery, onions and bean sprouts, with a very specific flavor—functions for me, and others, as powerful comfort food. My Dad, for example, who traveled with me to China and became quite a sophisticated Chinese eater, insisted until the day he died that no one was making that “great chow mein” they way they used to do it at The House of Chan in New York City. Well, the following recipe is for him. I have eliminated one of the basic techniques of old chow mein (sorry Dad!); when they were making chicken chow mein way back when, they would just pile some shredded slices of cooked chicken on top of the cooked vegetables. I think you get more flavor, and a better dish, if you cook the chicken with the vegetables (choice of white meat or dark meat is yours). When the chow mein is ready, you can eat it without the usual accompaniments, but I’m recommending that you go the whole retro route: the “mein” part means “noodles,” and chow mein in America was traditionally served mixed with white rice and those crunchy, deep-fried noodles that always appeared on the tables of Chinese-American restaurants.

1. Place a very large wok over high heat, and let it sit for a minute. Add the oil, spilling it around the sides of the wok. When it’s smoking, toss in the celery and the onions. Sprinkle ½ teaspoon of the sugar over them, and stir well. Stir-fry for 2 minutes, then push the celery-onion mixture to the side of the wok, leaving the center empty.

3. Add the cabbage and bean sprouts to the wok, tossing with the other ingredients already in the wok. Add the remaining ½ teaspoon of sugar, and toss again. Turn heat down to medium-high, and let mixture cook for 5 minutes; the vegetables should start losing their distinctness, merging together.