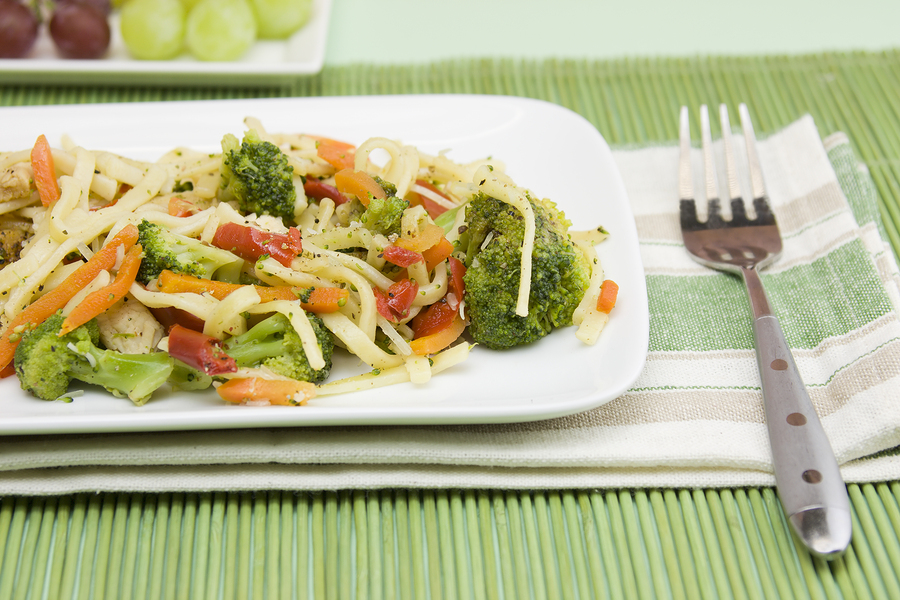 In the 1970s, the Italian-American restaurant dish that announced “we have moved beyond red-sauce Italian” was Pasta Primavera, a combination of pasta, cream and vegetables. It was when your local Italian restaurant became a “ristorante.” Le Cirque in New York City made the dish famous, but it became a nation-wide menu staple soon after that. Oddly, the dish may have had less to do with real Italian food than the red-sauce stuff did. As the myth of some unified “Northern Italian” food spread, many Americans assumed the cuisine was rich in cream—which it never had been. Nevertheless, Pasta Primavera usually featured not only cream, but lots of cream—for this was still the era when pasta in America carried too much sauce, no matter what the sauce was. The following version certainly has its fair share of cream, to be “authentic” to its Upper East Side roots—but you will find, I hope, a much more up-to-date sensibility in it, which I think makes the dish much better. There should be no excess of cream in the bowl; it should just cling to the pasta. And, the addition of lemon goes a long way towards counteracting the cream’s heaviness. The final result is a green, vernal dish, sprightly, balanced, that really does taste like primavera.

1. Bring a large stockpot of very well-salted water to a boil. (Add enough salt to the pot so it tastes almost as salty as seawater.) Have ready a large bowl of ice water and a medium-sized strainer. Cook the asparagus, broccoli, zucchini, and green beans one group of vegetables at a time in the boiling water until each group is tender but still a bit crisp, about 3 to 4 minutes for each one. As each group of vegetables finishes cooking, collect the pieces in the strainer and immediately immerse the strainer in the bowl of ice water to stop the cooking and set the color. Once the vegetables are cool (about a minute), transfer them to a bowl lined with paper towels (to absorb excess water.) Cook the peas for about 30 seconds, and cool in the same way. Combine the cooked vegetables and set aside. Cover the pot and the water and set it aside for cooking the pasta.

2. In a large sauté pan, over medium heat, add the pine nuts and, shaking the pan occasionally, allow them to toast lightly, taking care not to let them burn. When they become golden brown in spots, about 3 to 5 minutes, remove them from the pan and set aside.

3. Add the olive oil to the pan. When the oil shimmers and slides easily in the pan, add the mushrooms and stir them to coat with the oil. Cook until the mushrooms are just tender and cooked through, about 5 minutes. Salt mushrooms to taste, remove from the heat and drain on paper towels. Let cool, then combine with the other vegetables.

4. In a small saucepan over medium-high heat, bring the cream to a boil, reduce to a brisk simmer and cook until reduced by about half and slightly thickened. Be careful not to let the cream boil over. Add the shallots, garlic, lemon zest, cayenne and a few grinds of black pepper. Whisk in the butter until the sauce is well blended and creamy. It should easily coat the back of a spoon. Whisk in the lemon juice and add salt to taste. Simmer and whisk for another minute or so to re-thicken slightly. Remove from the flame and set aside on a warm part of the stove. Check frequently to make sure the sauce is holding; whisk it together if it isn’t.

5. Return the large pot of water to a boil and add the pasta, stirring occasionally to prevent sticking. When the pasta is tender but still firm (al dente), reserve a cup of the pasta water, drain the pasta and return pasta to the pot. Add the reserved vegetables, the cream sauce, pine nuts, cheese and basil and toss thoroughly over a low flame. If the sauce seems a bit thick-each strand of pasta should glisten with a little medium-runny sauce—add some of the reserved cooking water and toss again. Taste for seasoning. Serve in warmed bowls, garnished with basil sprigs.