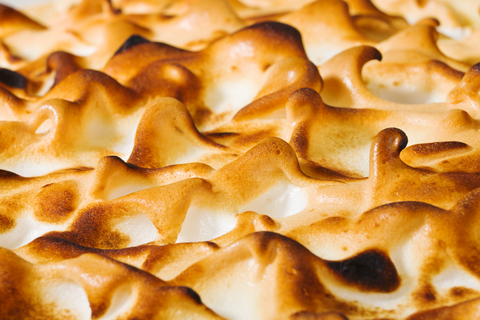 For its amazingly high pleasure-to-work ratio, this dessert has most others beat. It is a totally unfashionable vestige of the old South, the kind of dessert you might find at those wonderful cafeterias in Texas: banana slices layered with a vanilla custard, vanilla wafers, and meringue. The way these ingredients fall together into a dreamy, creamy, utterly seductive whole is simply astonishing. Now, you could work a lot harder on this thing—by making your own custard, even making your own vanilla wafers. But the following recipe—given to me by a friend from the South whose family makes it all the time and calls it “Nanner Pudding”—beats any hard-work “gourmet” version I’ve ever tried. So break out the Nabisco wafers, and the Jell-O—and remember that cooks should be judged only by how good their cooking tastes.

1. Line the bottom and the sides of an 8″ x 8″ x 2″ baking dish (about 2-quart capacity)—oven-safe and non-reactive–with a layer of the cookies. They should just about cover the bottom of the dish.

3. Prepare the Jell-O Vanilla Pudding according to the pudding directions on the package (you will need the 4 cups of milk to do this.) When the pudding is done, still hot and undivided, then add the nutmeg; set the pudding aside to cool for 5 minutes (but no more.)

4. Peel two bananas, and slice them into rounds that are 3/8″ thick. Top the layer of cookies in the bottom of the dish with the banana slices. Top the banana slices with a second layer of Nilla Wafers. Peel the remaining two bananas, slice them into rounds that are 3/8″ thick, and distribute them evenly on top of the second cookie layer. For the final layer, top those bananas with another layer of cookies.

5. Pour the still-warm pudding over all. Shake the dish carefully, and tap it on counter, to remove any air holes within the layers.

6. Make the meringue. To the medium-sized bowl of a standard kitchen mixer with the whisk attachment add the egg whites, sugar, vanilla extract and lemon juice. Whisk the mixture on medium speed until it just holds a peak. It should be light a fluffy; do not overmix it.

8. Place the pudding on the top rack of the oven. Cook it quickly–just until it is nicely browned on top, about 3 minutes. It can burn very easily, so watch it carefully. Remove from oven, and let the pudding cool down for one hour on the counter top. Then place in refrigerator, and cool for at least 3 hours, but not more than 5 hours.