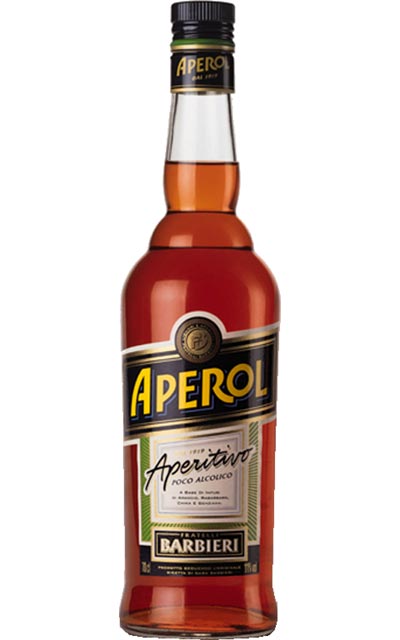 In recent years, only one new bottle of booze has earned a spot on the shelf behind my bar: Aperol, an orange-red Italian aperitif. Get used to this name…it is Italy’s hot new cocktail mixer. I had an “Aperol Spritz” in Modena about two years ago, and I was hooked instantly; it has become de rigueur at the start of my Italian dinner parties. The comparison to Campari makes the case. I love Campari, but many of my co-Americans find it too bitter. Aperol is kind of similar (though rhubarb and orange give it its own spin)—but it is much less bitter, slightly lighter in color, and has an alcohol content of 11%, less than half of Campari’s! For those counting, the sugar content—moderate—is about the same.

Everywhere I go in Italy these days, I’m seeing Aperol spritzes. Lots of American bars are offering them too. It is a new fad—though Aperol was invented way back in 1911, in Padua. Perhaps the fact that the Campari company took over Aperol, and is heavily promoting it, has much to do with the onslaught!

I’m putting my cocktail weight behind this: get yourself a bottle and start making Aperol spritzes…perfect for the summer! Just resist the temptation to put in too much Aperol: that ruins the drink.

Here’s a good recipe as your guideline. I like a tall glass, but big wine glasses or tumblers are also just fine:

1. Add ice and a slice of orange to a glass, pour in Prosecco, Aperol and a dash of soda. Mix.

You won’t be alone. Tomorrow, Friday June 29, Aperol will make history by attempting to set a Guinness World Record™ for the ‘Largest Aperol Spritz Toast’. The Aperol Spritz! Happy Record! is taking place in the heart of Venice’s famed Piazza San Marco at 12PM EST (6PM in Italy).

Attendees taking part in the Guinness World RecordsTM attempt will sport orange T-shirts and literally create a giant Aperol Spritz drink by standing in a glass formation as they raise their glasses for a toast. The iconic location was selected because Veneto is the official home of Aperol, and the dramatic, large-scale toast will pay tribute to the place where it all began.

To learn more about this exciting celebration, please visit facebook.com/aperolusa.

BUT…MOST IMPORTANT…get a bottle of Aperol and make your own spritz this weekend! I’m telling ya…is this ever heads and shoulders above a glass of Pinot Grigio as a way to start a meal!