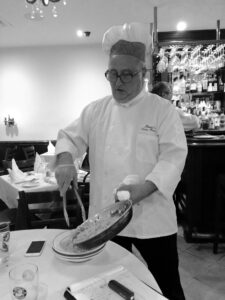 Most New York City visitors think that if you want real, old-school, red sauce Italian, you have to stop into one of the red-checkered tablecloth joints of Little Italy. But locals know if you head a few blocks uptown into the real old Italian neighborhood of Greenwich Village, you can happen upon family-owned restaurants, whipping up bowls of fresh pasta smothered in sauces, authentic brodo, tender veal saltimbocca, and that spicy tomato dish known as Lobster Fra Diavolo, cheaper and better than most of the places on Mulberry Street. One such spot is tucked away, down a half-flight of stairs on historic MacDougal Street: Monte’s Trattoria.

The stretch of MacDougal dominated by famous Minetta Tavern and packed to the gills with NYU students for nine months of the year usually gets a pass from most natives, unless they have a specific, and usually beloved spot in mind, like Monte’s. Chef Pietro Mosconi came to New York without knowing a lick of English in 1966 and immediately began working in some of the city’s well-known restaurants at that time. Ten years later, he found himself taking over the Monte’s space at 97 MacDougal Street, a spot that had housed Italian restaurants since 1918, while also running another restaurant down the block, Villa Mosconi. (Villa Mosconi is still open, and dedicated to more Northern Italian and classic Emilia-Romagna cuisine.) Stepping inside subterranean Monte’s is akin to stepping into old New York with its small wooden bar, white tablecloths, and walls lined with photos of the celebrities and politicians who’ve dined in the unpretentious space, plus a few select shots from Chef Mosconi’s past. 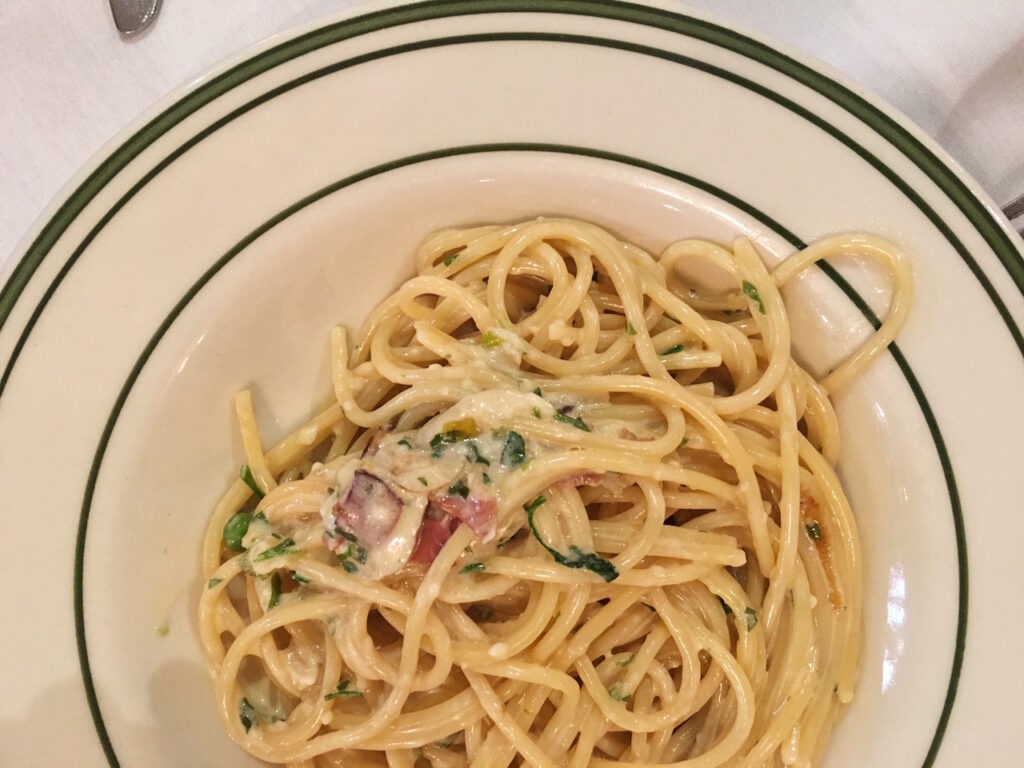 For the menu, Chef Mosconi relies on established Italian-American fare through the lens of a person who grew up in Emilia-Romagna. As one of seven, young Pietro lived a rural Italian life—school, the market, and church were in town, but if something had to be made quickly, you had to make do with what was on hand. Close with his mother, he often found himself in the kitchen, assisting her with the pasta making, a skill that’s made him known among us gluten-full New Yorkers. To this day, most of the pasta is made fresh by Chef Mosconi and his team, making a trip there the perfect reason to forego pasta night at home. 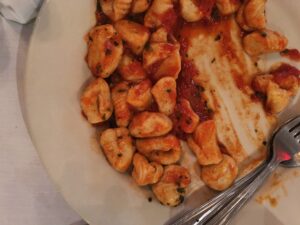 Instead of frozen, stale breadcrumb-covered mozzarella sticks and gloppy decadent dishes, you’ll find refreshing seafood antipasti, or the right balance of egg-laced cream sauce, salty prosciutto and al dente noodles for spaghetti carbonara. For pasta-lovers, the dish to know is Paglia e Fieno, the name literally translating to “Straw and Hay.” Chef Mosconi makes paper-thin sheets of spinach and egg pasta before slicing them into strands slightly larger than your average linguine. After a quick boil, the pasta is thrown into a heavy cream-rich sauce flavored with morsels of prosciutto and peas. What results are two intertwined pasta, coated in sauce, and an entree that will make you forget whatever heartbreak caused you to need such comfort. The portions though are what reminds you that these are coming from an American kitchen; heaping plates of pasta, meat dishes arriving with enough to split and possibly take some home, a blanket of cheese over the eggplant parmigiana.

Through all of this, what makes the dishes so noteworthy is the freshness of it all. Most red-sauce restaurants leave you feeling over-sugared, dying for fresh water to combat the salt and ready to sleep off the gluttony. When you leave Monte’s, you’re open to a walk around the neighborhood, ready to pick up a scoop of gelato, to sit in the park under the trees, relishing the freshness you just tasted, a feeling many associate with food in Emilia-Romagna and old-school, red sauce Italian joints.

For more information about this celebrated chef, read our article Who is Pietro Mosconi?.