For Wine Lovers: The True Meaning of “Garrigue”

Go to any posh tasting in the U.S. of wines from the south of France, and the first description you’re sure to hear is “ah! the aroma of garrigue!” Everyone is into it because Robert Parker started including it in his southern French notes years ago—and because, let’s face it, it’s a catchy word that makes you sound smart.

But there’s a lot of dumb garrigue usage out there. For starters, it is not a single herb, as some believe. It is a group of Mediterranean herbs—some familiar, like thyme and rosemary, some not so familiar—collectively referred to as “garrigue.” They grow near each other, and together they have an effect on wine.

I was in garrigue country a few days ago, so let’s take it from the top.

The word itself is derived from the old word in the Languedoc language for a prolific tree of the area. Lots of herbs traditionally grew around these trees. The word “garrigue,” originally used for the tree, got switched to the surrounding herbs. Today, the tree itself  is called the “chêne vert,” or “green oak.”

In the contemporary Languedoc, there are many tall green oaks. But those clusters of herbs (now called “garrigue”) still grow around them. 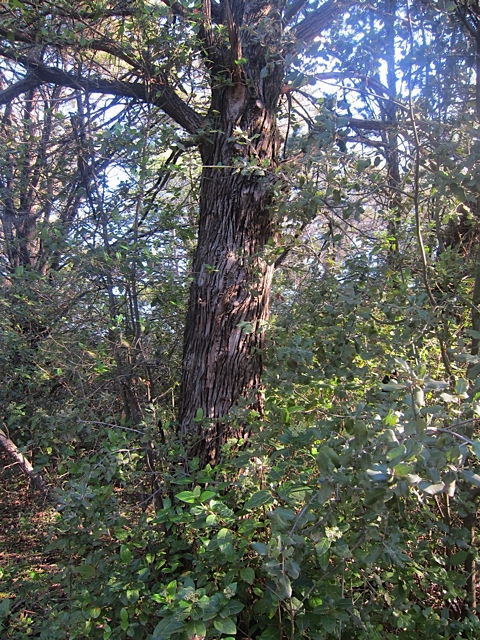 “Chêne vert” tree on the property of Domaine de Costes-Cirgue

There is one more fundamental truth about garrigue that we normally overlook. According to Jean-Benoît Cavalier of Chateau de Lascaux in Pic-St.-Loup, the trees and herbs “must be on limestone. There are other clusters of herbs in the Languedoc, but they actually have other names. If they’re growing on granite, for example, they’re called ‘maquis,’ not ‘garrigue.’ ”

Of course, Chateau de Lascaux has gorgeous limestone vineyards at Pic-St.-Loup. “The one I visited yesterday was typical,” said Cavalier “…a rectangular plot bordered on every side by high green oak trees and garrigue on the ground.”

“From a vineyard like this,” said Cavalier (a vineyard that happened to be planted to Syrah) “…you can smell the garrigue in the grapes themselves.”