My Five: Fave Restaurants in the South of France

Who is not seduced by the south of France? And we’re not talking simply Riviera, here: the whole damned southern stretch from the Atlantic Ocean on the west to the Alps on the east is bewitched. And delicious. Now, I haven’t been to every restaurant in the south of France, of course…but these five extraordinary experiences are the ones to beat right now!

1) L’OUSTALET in Gigondas (not far from Avignon)

Even if you bring a picnic lunch, get thee to Gigondas—the dreamy little town just under the crenellated cliffs called “les Dentelles.” 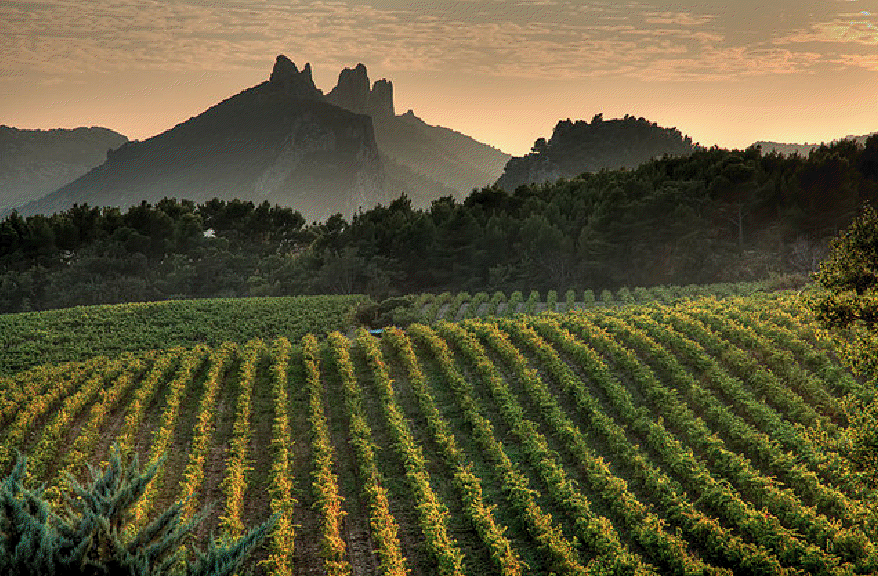 Off in the distance, the lace-like cliffs known as “les Dentelles”

Gigondas is a super-important red-wine village in the Rhône Valley, but it’s tiny. And charming. There are a quartet of restaurants on the micro-town-square, under leafy trees in the spring and summer. The one you need to book is L’Oustalet, which is now owned by the famous Chateauneuf-du-Pape family, the Perrins.  About two years ago they hired  Laurent Deconinck, a Belgian-born chef who has cooked in major restaurants all over France…and he has improbably turned this sleepy bistro into a major restaurant! 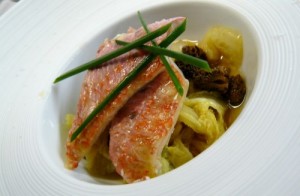 Deconinck’s filets of rouget cooked in a cocotte

But not by splooshing up the menu with unwanted chef creativity. Sure, you’ll find the occasional Asian ingredient in Laurent’s wildly flavorful dishes—but the base is traditional French, done at a supremely high level, with supremely extraordinary ingredients.  I shall never forget the veal rib roast I had last May (2011): an oversized thing (it was Charolais, Laurent told me), seared in a pan, then roasted in a cocotte with a mountain of fresh morels, arriving crispy on the outside, velvety on the inside, tasting for all the world to the six of us like a porcine version of exquisite young beef. The lip-smacking went on for hours—as did the consumption of Gigondas (Laurent has BRILLIANT ideas about matching food with local wine). This is a MUST-GO, MUST-NOT-MISS EXPERIENCE, especially outside for lunch on a beautiful day. I have no idea what Michelin 2012 says. I do not care. JUST GO!

One of the best chefs in the Rhone Valley is Serge Chenet who, after decades in grand, traditional restaurants, recently opened his own, less formal country place, Entre Vigne and Garrigue, in Pujaut, just north of Avignon, on the right bank of the Rhone. More overtly “creative” than Deconinck, Chenet nevertheless grounds his flights of fancy in amazingly delicious, now-rare classic technique. I usually avoid the frou-frou stuff, but after I spent time in the kitchen with this guy and watched him make a lobster stock that suggested 1935, I was a convert. Chenet’s version of the old local classic, stuffed zucchini flowers, is breathtaking in its modernity. The golden flowers, for one thing, are stuffed with an airy, unusual smoked salmon mousse (from salmon that Chenet smokes himself). Traditionally, the flowers are fried in local olive oil—but Chenet steams them instead, surrounds them in season with a gorgeous array of chunky local vegetables, and glistens the whole with foamy “cappuccino de coriandre.” The light white and rosé wines of the region never seem so perfectly matched as they do with this “enlightened” Provençal dish. I fell in love with this place for its location, as well—a farmhouse, looking out across a vast field of lavender, wildflowers, vines, olive trees and garrigue, perfectly backlit by the setting southern sun. A fantasy. 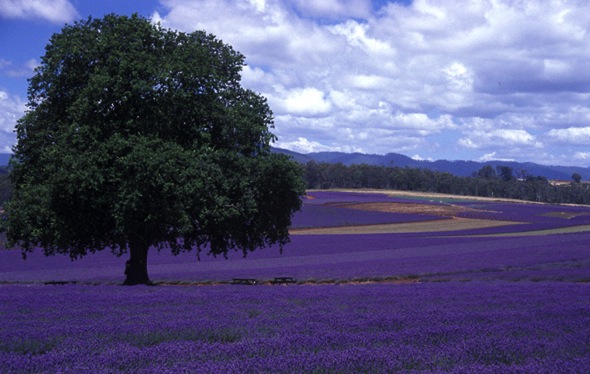 Now, this place goes all the way…to full-out idiosyncratic chef creativity…in which I usually have no interest! Unless the chef is a blinkin’ genius. Ferran Adria I’ll eat. César Ramirez (at Brooklyn Fare in NY) I’ll eat. And Yannick Delpech, of L’Amphitryon, I’ll eat. Why has he not become a break-out name? Location, perhaps? In the backyard of the Toulouse airport? Decor, perhaps…soulless modernist, in a building that looks something like a doctor’s office in the suburbs? 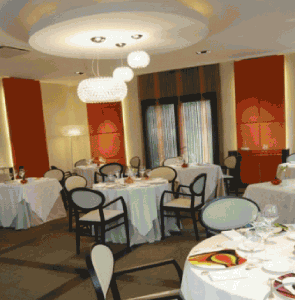 I don’t know. Don’t care. I’ve been there twice over the last five years, and I think Delpech is one of the greatest young chefs in France. His food includes all kinds of Asian things, fruit things, sweet things…the line-up that usually makes me long for a simple coq au vin. But Delpech is so precise in his cooking, so intuitive in his crazy juxtapositions, so artistic in his presentations (and always in new ways…no clichés!), that I dream of returning to L’Amphitryon. 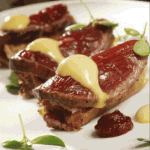 Poultry is what I remember more than anything; the current carte offers both a Lauragais free-range duck roasted in a crust of black pepper, coriander seed and cumin, as well as a pigonneau (I’ve had insane ones here) with girolles, quinoa, almond milk and yuzu.

Le Lion d’Or in the Medoc

Certainly the most controversial restaurant of this quintet! That’s because I didn’t really choose it for the food—though I LOVE eating here!—but more for the crazy environment it is. The tiny town of Arcins is just a few kilometres from the town of Margaux, which means that the roadside stop Lion d’Or is smack in the middle of the Médoc, one of the world’s most famous wine regions. And it is, as you might guess, a kind of “club,” at lunchtime, for the top winemakers in Bordeaux…who have brought their own wine to lunch, as you are allowed to do (much swapping occurs, if you’re bold!) Moreover, the chef/owner, Jean-Paul Barbier, is a swaggering, rough-edged, truculent trip—but in a way that makes you smile! 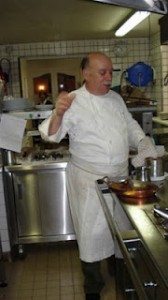 On my first visit, twenty years ago, he came up to me and asked if I like the sauce. I guess I wasn’t enthusiastic enough, because he then ran his forefinger through the sauce on my plate, tasted it off his fingertip, and pronounced “ça va!” I would travel far for that sauce, and what it covers. I especially like game and “les abats” here (the French word for organ meats). I can’t forget the gorgeous foie de veau (calves’ liver) I had here two years ago with execs from Chateau Palmer…not to mention the wine! 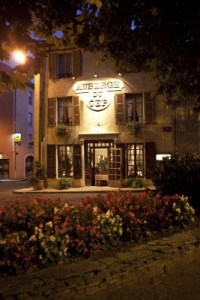 Le Cep, on the ground floor of the Auberge du Cep, in the “enfleuri” town of Fleurie

There’s only one proviso connected to this inclusion: it’s not technically in the SOUTH of France. But if you were driving from the south of France to Paris, you’d reach Fleurie, in the Beaujolais region, on your way. And, to seal the deal…I cannot think of a restaurant in ALL of France that makes me happier! For decades, Chantal Chagny has been at the helm of this pretty, old-fashioned little place at the center of one of Beaujolais’ prettiest and most famous villages. 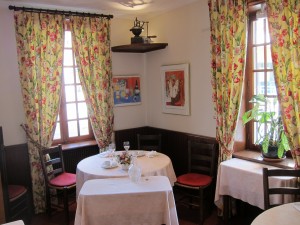 A corner table at the quaint Le Cep

There are plenty of stories and histories and tragedies connected to this place…but today the restaurant is a sheer joy, content to turn out some of the most steady and delicious bourgeois cooking I’ve ever had. The duck terrine alone makes me want to get on a plane, now! The crayfish gratin is similarly insane, and you will not find better frogs’ legs anywhere (Chantal insists that she’s the only restaurateur in France always using fresh, not frozen grenouilles…from the famous frog place Dombes, of course, that’s not far away). I’ve brought lots of friends here over the years, and the reaction is always the same…”wow! everything at this place is first-rate!” 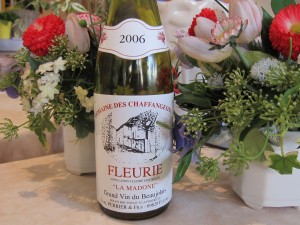 A bottle of the local juice at Le Cep