The Real Deal Meal in Curaçao 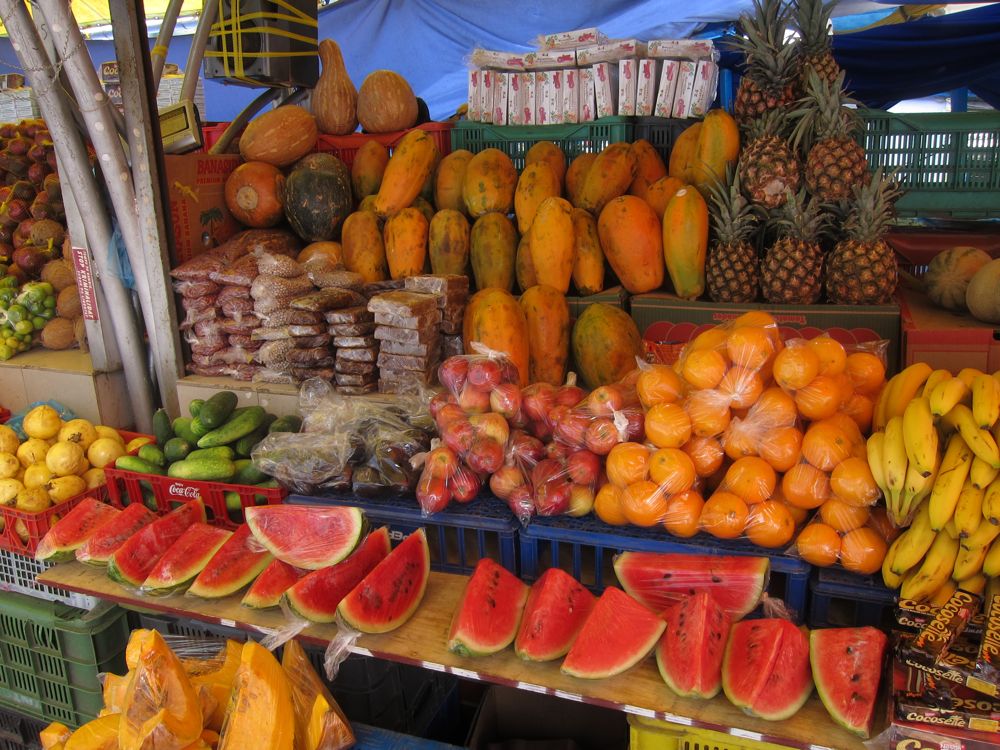 Traveling anywhere in the world today, in my book, means a constant, frustrating search for authenticity. It is easier than ever to fall into the traps of non-local food, or “local “food generated for tourists. The gastronomic traveler always wants to avoid these, always wants to find instead the equivalent of what the local mamas are cooking at home, which usually ain’t easy. But if you don’t stick to this discipline…the world becomes a blur, and you might as well stay at home.

Things are no different on the island of Curaçao, deep in the southern Caribbean, 38 miles north of the coast of Venezuela—where I visited this spring.  A beautiful place for beaches, snorkeling, diving, and late-night music, Curaçao has a fine cultural scene in Willemstad, its capital, fraught with reminders of the long Dutch history on the island, even the current Dutch presence. 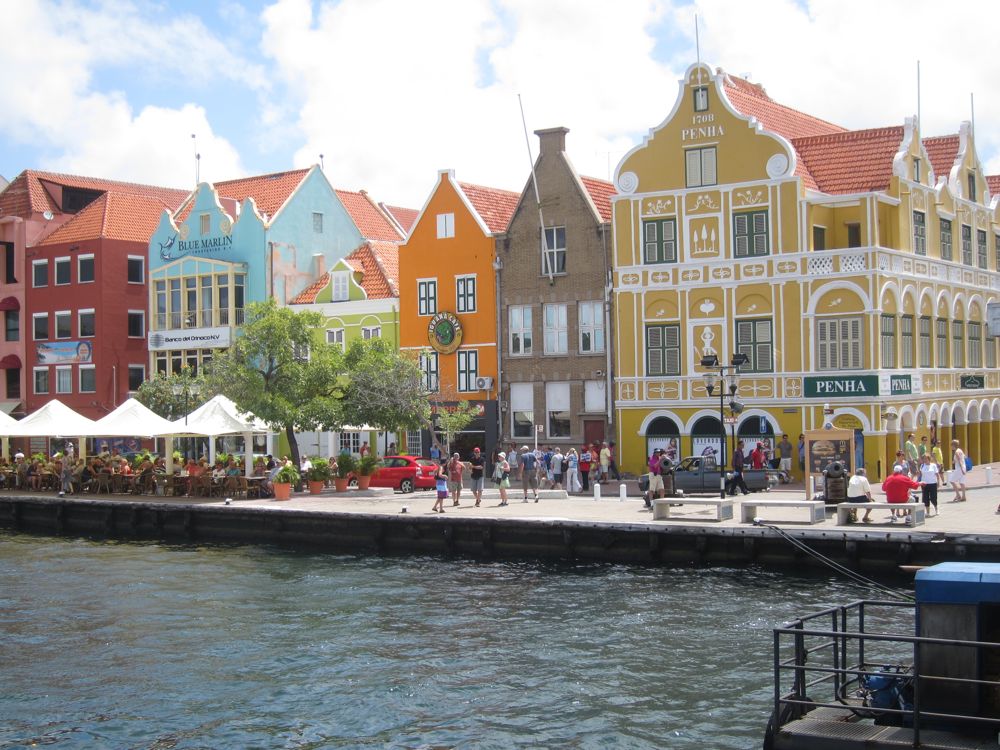 In Curaçao’s restaurants, particularly in Willemstad, there are also reminders of the many visiting groups over the centuries: Spanish, Portuguese, French, English, Chinese, Southeast Asians, and more. I suppose you could eat in 25 different ethnic restaurants and claim you’ve ingested Curaçao (more than 50 nationalities are represented!)…but you will certainly not have ingested what the locals are ingesting every day.

The largest group of locals—about 70%—is descended from the Africans who were part of Curaçao’s sickening slave-trade years, from mid-17th century to mid-19th century. After liberation, most of the freed slaves stayed—and form today the most vibrant part of Curaçaoan culture.

That includes food…the real deal food you want to seek out.

One way to do it is to hit the night truck scene. 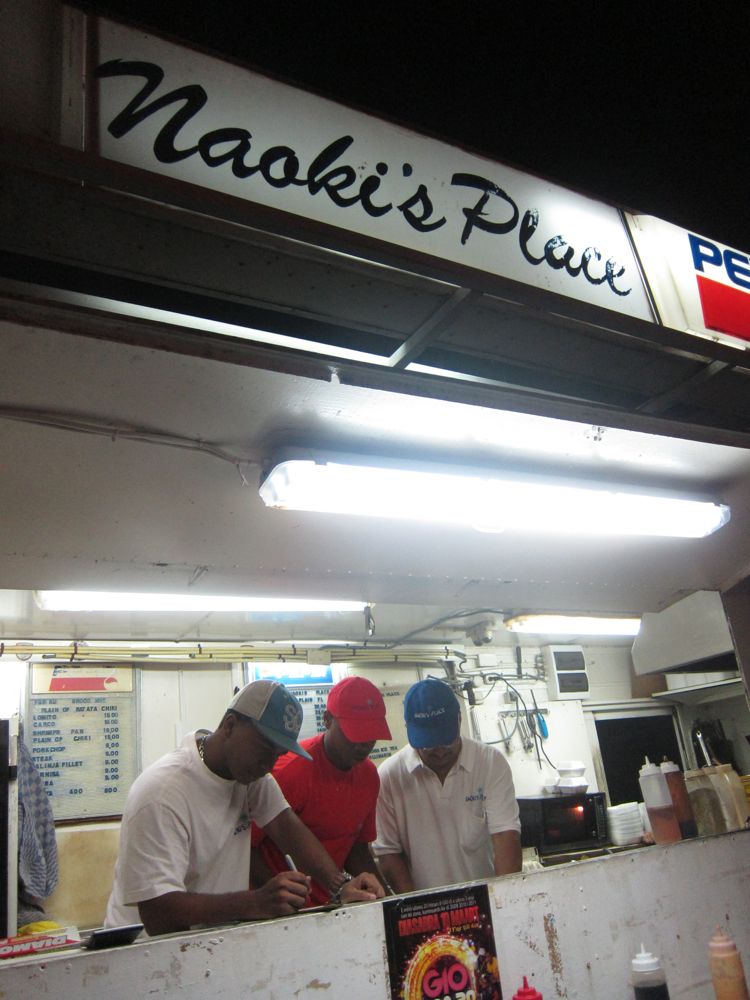 At about 9PM every night, the trucks roll into their places and serve a wide variety of local sandwiches (they are known as “bread trucks,” very handy for soaking up alcohol in one’s system). Chicken with peanut sauce is one of the big faves.

Me, I like to get it done at lunchtime…and at a place where you can sit down. And sample lots of things. If this is what you want as well, your prayers are powerfully answered in Curaçao.

Most days (except Saturdays and Sundays), just behind the brightly painted Dutch buildings known as the Handelschade in the heart of downtown Willemstad, you can walk your way through three markets: the Floating Market… 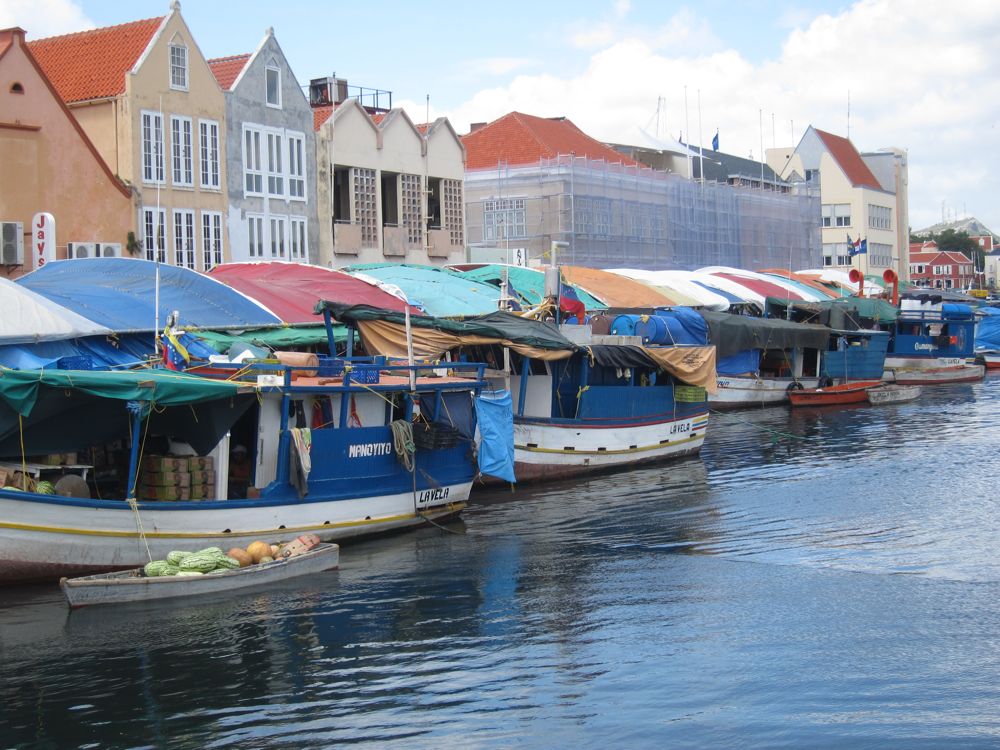 …(actually quayside, but boats deliver fruits and vegetables to the back doors), the Central Market (doo-dads plus groceries), and…most important…the Marshe Bieu, or Old Market, where the Curaçaoans line up every weekday at noon to visit seven or 8 local food stands, then go to work at communal tables. 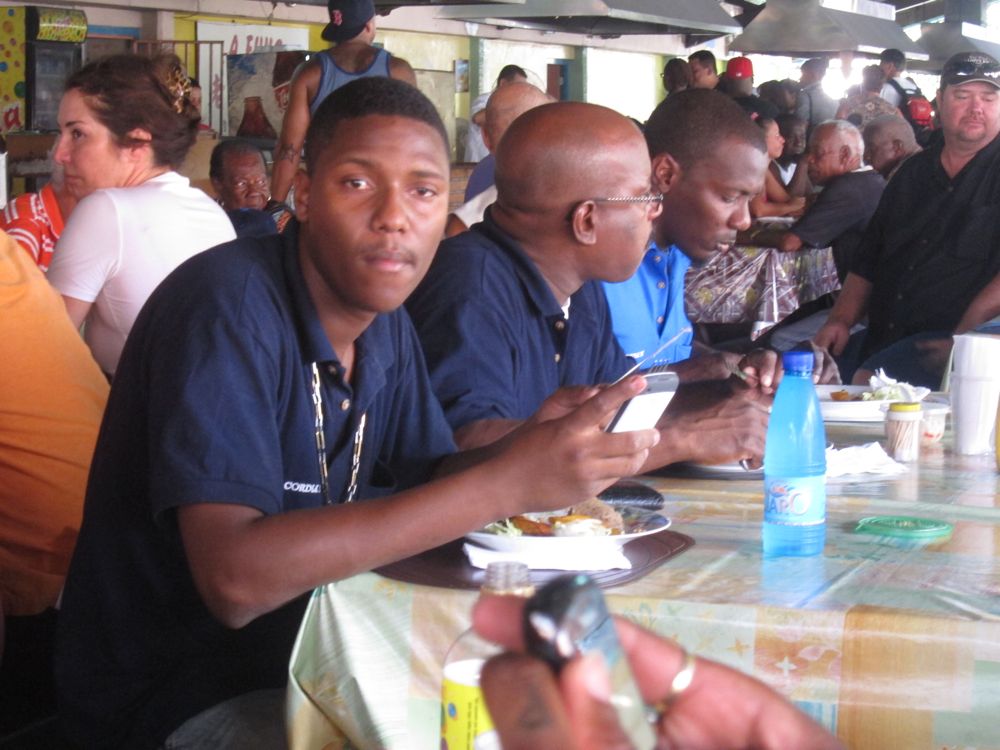 The most popular place by far is Yvonne’s… 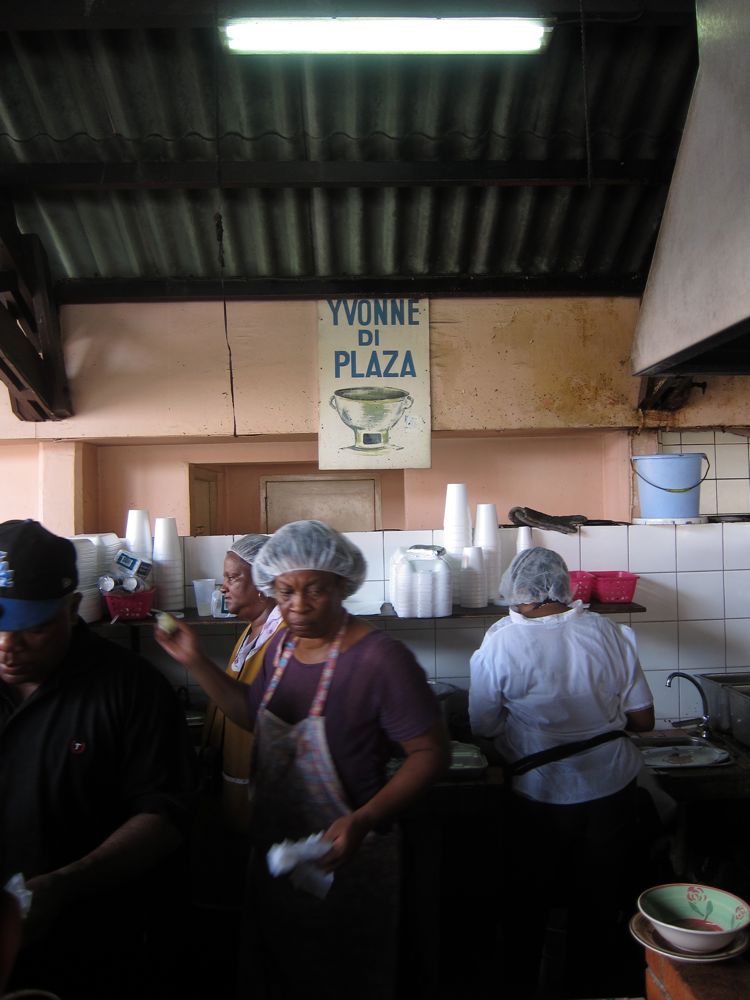 …at the front of the hall, where you can without fail eat exactly what most Curaçaoans are eating all over the island today, dished up by local mamas. 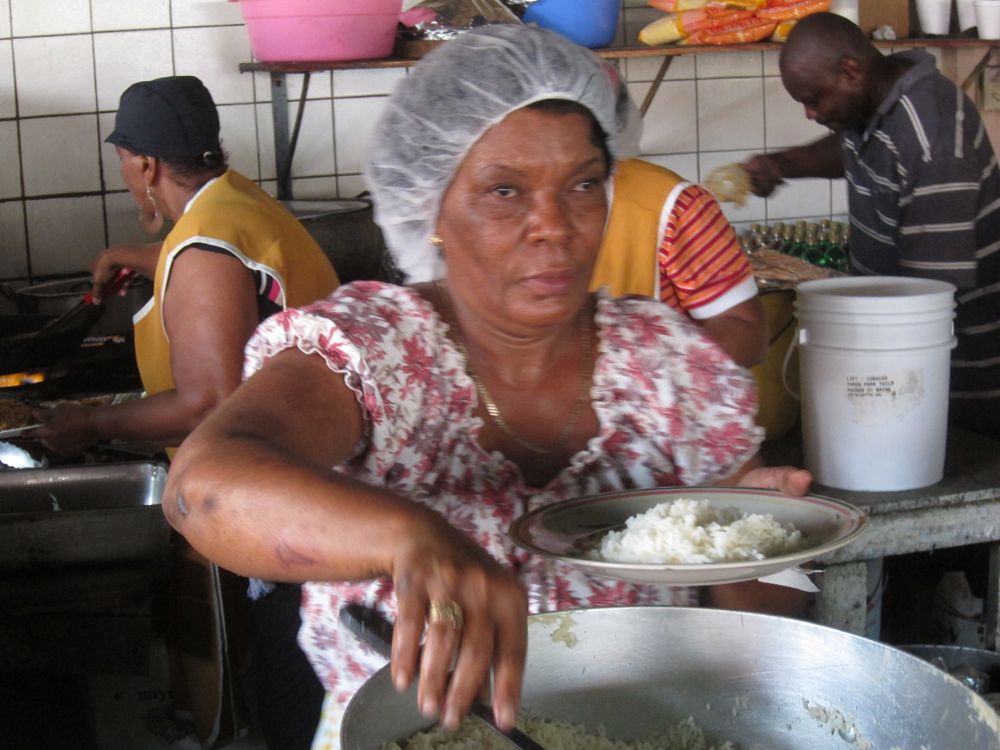 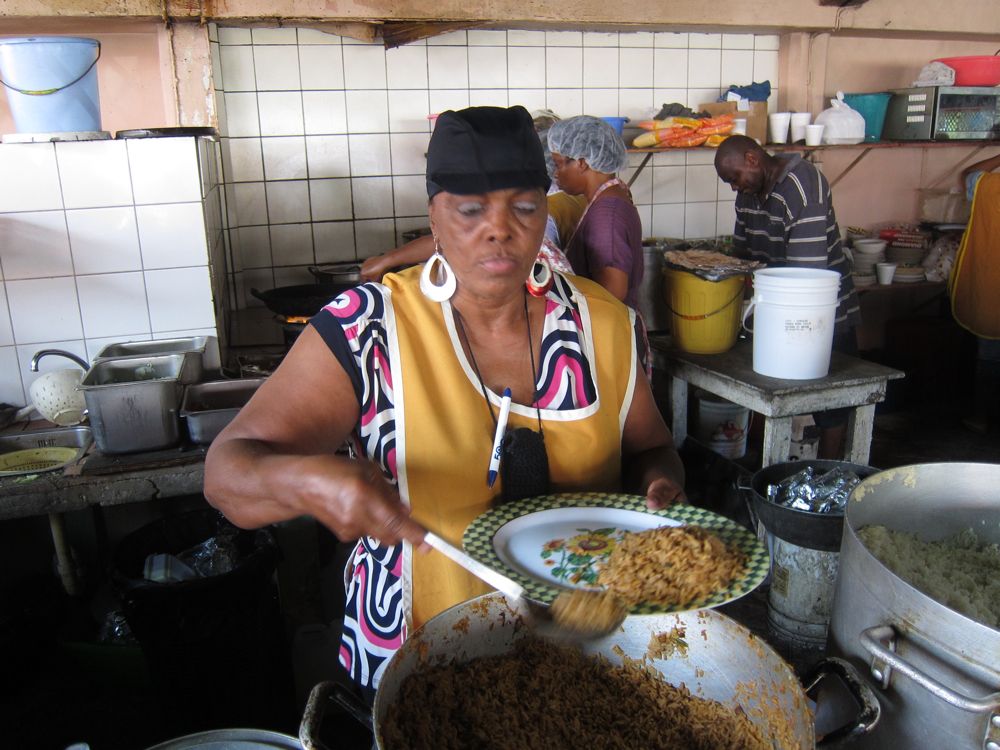 And what is it, exactly? The style is called kriyoyo (in the local papiamentu language)—a cognate of the Spanish word criollo, which is a cognate of the Louisiana word creole. Think general “Caribbean,” and you’re off to a good start. But this is “Caribbean” with a very African flair, with influences from nearby South America, and with an awareness of the 50 other ethnicities on the island. Some of the favorite dishes are kabritu (stewed goat in a slightly sweet brown sauce)… 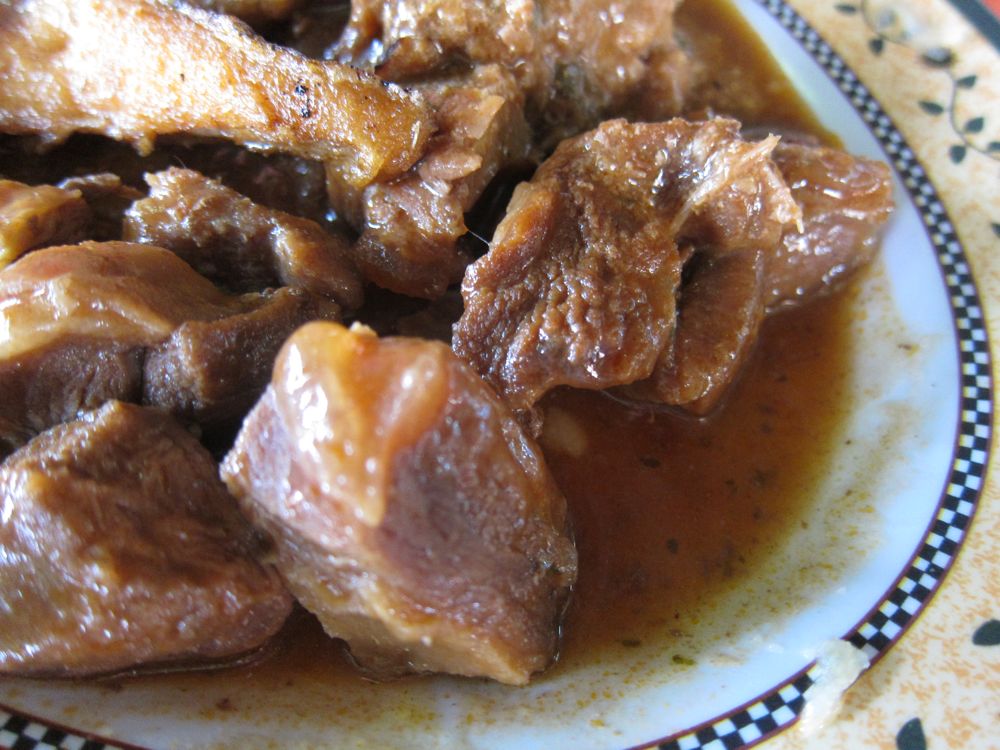 …stoba (which means “stew,” and there are many of them), karko (conch, thin slices usually cooked in garlic and butter)… 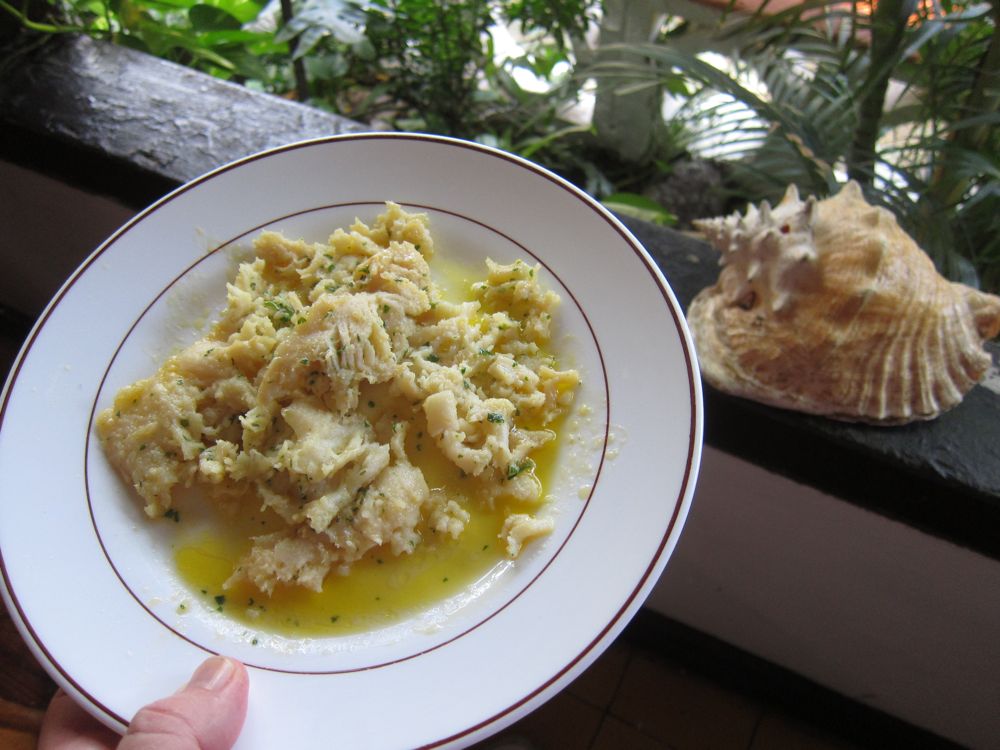 …funchi (the ubiquitous accompaniment of cornmeal paste, like polenta), and tutu (which is beans and funch combined). Local fish, simply grilled, is also on the menu every day all over the island.