Umbria, The Easier One-Day Trip Out of Rome 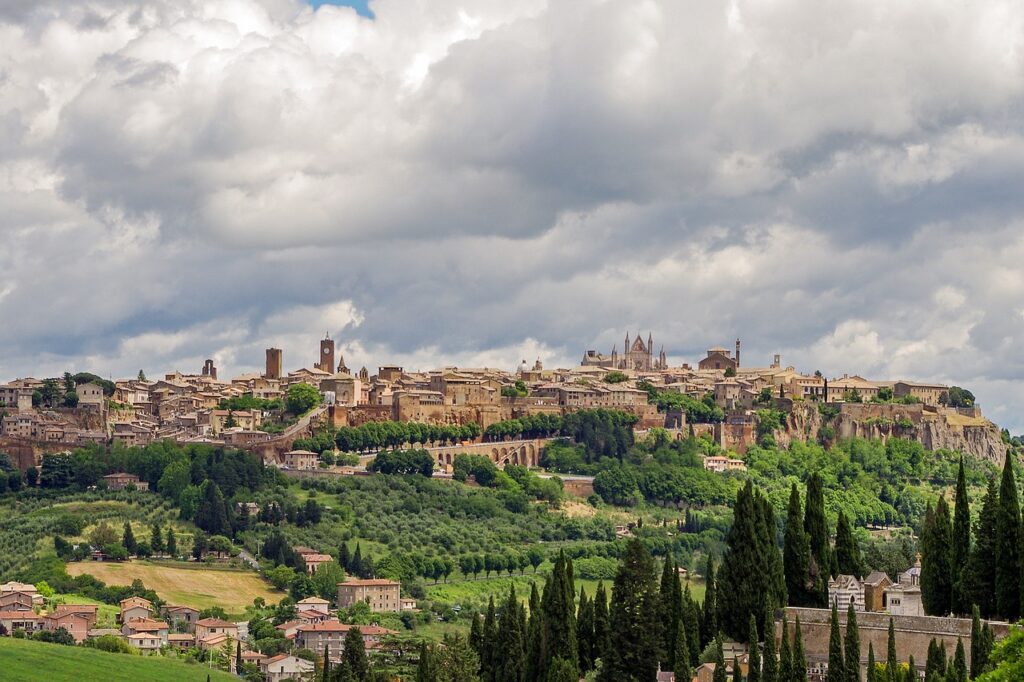 While quick trips from Rome to the heart of Tuscany are doable, you’ll get a better feel for the classic Italian countryside, ancient hilltop towns, and, of course, traditional dishes like porchetta, by heading to the much closer Umbria aka Italy’s “Green Heart.” North of Rome’s home province, Lazio, Umbria is easy to explore for an afternoon out of the big city. Plus, if you feel like staying the night to see everything, it is home to various hotels and high-end spas in renovated castles. 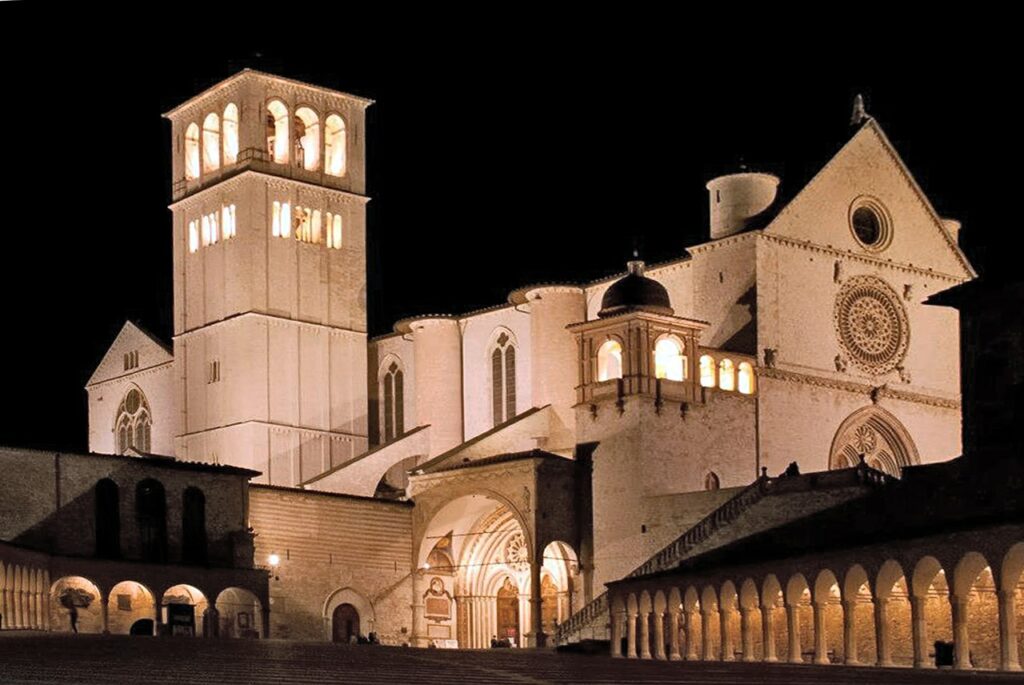 Assisi – 3,000 years ago, around 1,000 BC, a small population of Umbrians settled on what would become Assisi. The main attraction here is, of course, the double-leveled Basilica Papale di San Francesco, the Papal Basilica of Saint Francis of Assisi. The Upper and Lower Basilicas with their multiple chapels are replete with famous frescos and at least one tomb. Head down to the crypts for Saint Francis’ somber burial chamber, created after his hidden remains were found in 1818. It is definitely worth getting a tour to catch all the features of this UNESCO World Heritage Site.

Perugia – Sitting above the River Tiber, Umbria’s capital, Perugia, is home to picturesque piazzas, medieval streets, and an annual chocolate festival. The nucleus of every Italian town is its cathedrals, churches, and basilicas. One of Perugia’s is the Basilica di San Pietro. The 10th-century church and abbey houses an impressive collection of Renaissance Umbrian art, as well as the L’Orto Medievale, a garden featuring plants straight from medieval myths and religious ceremonies.
But no visit to Perugia would be complete without a tour of the Perugina chocolate factory. Located on the outskirts of town, you can view the test kitchen, a small chocolate museum, and get a tasting of all of Perugia’s products including all the silver-wrapped Baci you can eat. 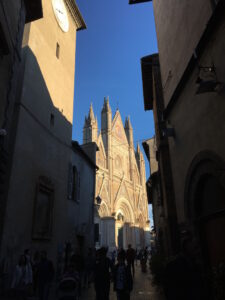 Orvieto – A thousand feet in the air, high above scenic rolling plains, vineyards, olive groves, and cypress trees, lies the 13th-century town of Orvieto. As you head up the hill, towards the older part of town, the Duomo slowly reveals itself. The striped Duomo (it was made with alternating layers of white travertine and blue-grey basalt) is a Gothic marvel with its golden and bronze façade of bas-reliefs and statues. The Duomo contains religious artifacts including the remains of St. Pietro Parenzo. Afterward, get a guided tour below town. The ancient Etruscans pierced the hill with a network of tunnels and caves.

Spoleto –To the east of Orvieto is another hilltop town that traces its roots back to the BC era, Spoleto. Here you will find the charming Cattedrale di Santa Maria Assunta and the 4th-century Basilica of San Salvatore, but the main draws are the Rocco Albornoziana, a 14th-century papal fortress, and the annual arts festival, Festival dei Due Mondi (Festival of Two Worlds). This summer festivity celebrate music, theatre, and dance over the course of three weeks from mid-June to early July.

Urbani Truffle Museum – Forget Piemonte and Tuscany, Umbria is actually the largest producers of black truffles and where the famous Urbani Tartufi company is headquartered. Still family-owned, the Urbani main factory is not open to public for good reason (there are expensive truffles everywhere). But in the tiny hamlet nearby, Scheggino, is the Urbani Truffle Museum. The small space covers the history of truffles in Italian food culture and the Urbani’s rise to the cream of the crop. Of course, there’s a shop attached with anything and everything truffle you could need (and sneak home). (Piazza Del Mercato, 22) 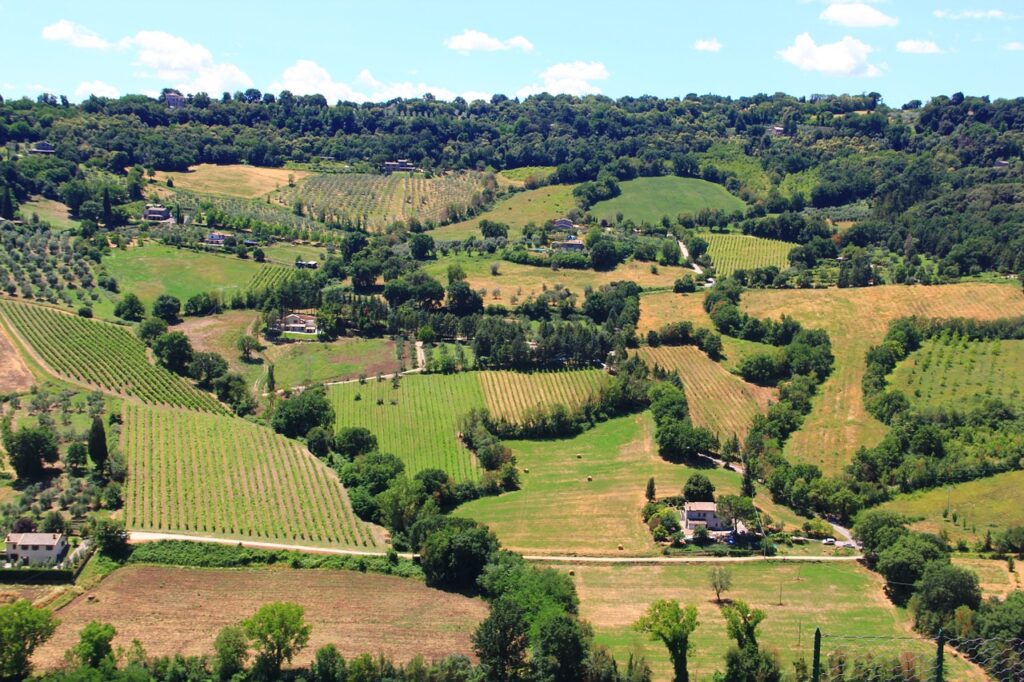 Centro de lu Munnu – If you take the highway south from Assisi to Spoleto or the train back to Rome from Perugia, you’ll happen upon Foligno. The town is mostly modern due to WWII bombing, but you should head to the restaurant Centro de lu Munnu. Run by the Savini family, it specializes in very traditional Umbrian cooking—don’t worry, there is pasta!—and wood-fired pizzas. (Via Bevagna, 6)

Podernovo – Right off the road from Narni to Orte is the restaurant Podernovo, located on the Castello delle Regine estate. The restaurant displays the Castello’s bucolic nature, and most everything served is local, from the wild game to homemade pastas and bread.(Strada Ortana Vecchia 2/v)