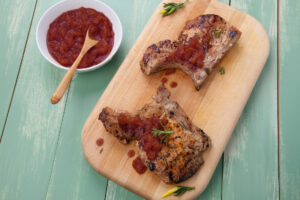 If you want your pork chops (or most white meats for that matter) to be extremely juicy, brining is the way to go.  Adding this step first before searing the chops will garner maximum tenderness.  As for the actual cooking, it’s imperative that you get your pan as hot as possible before adding the pork chops, and not to move them once you’ve laid the first side down. This ensures a deep brown sear with an intense savoriness that balances out the sweetness of the sauce.  While prepping takes a bit of time, it’s quite simple and the end result is well worth the wait!

For the brine: pour water into a large container, then add sugar, salt, garlic, peppercorns, grapefruit juice and zest. Stir well until sugar and salt dissolve, then place the pork chops in brine and cover. Place the container in the refrigerator for at least four hours, preferably overnight.

Remove pork chops from the brine and pat dry on both sides with paper towels. Allow chops to sit uncovered in order to come to room temperature, about 20 minutes, occasionally patting the surface dry of any moisture.

In a medium saucepan over medium heat, cook the garlic and shallots in olive oil until translucent, then add figs and chopped rhubarb. Cook while stirring occasionally until rhubarb softens, about five minutes. Add the California cabernet, cover, and simmer for five-seven minutes until rhubarb has broken down. Stir well and simmer uncovered until the sauce thickens slightly, then remove from heat and stir in balsamic vinegar. Keep warm.