A Quick Guide to California Wines 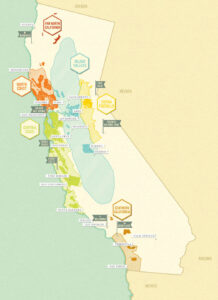 Talk with a wine expert about California wines and you’ll end up getting a full lesson in geography, geology, and if there’s been enough Zinfandel, politics. There will be mentions of the 2004 movie Sideways, its effects on the Merlot industry and the fame it brought to the Central Coast. The expert will fall on one side of the Sonoma versus Napa divide, that argument will bring about talk of Robert Mondavi and his legacy. Don’t mention the drought or whether the state’s farmers are in the right when it comes to water. And feel your cheeks inflame when you mistake the Russian River Valley with the Santa Ynez Valley, and that both are somewhere by Paso Robles (how embarrassing!).

California’s wine industry and everything it produces can be bewildering to any new wine drinker. Most know that it’s the current gold standard for American, New World wines (wines made in non-European countries that tend towards the fuller, more fruit-forward side), and its status among the world’s wines is clearly well deserved. The 2015 harvest represented 85% of American wine, making it the fourth-largest region worldwide in terms of production with over 200 million cases of wine, and was worth almost $32 billion total. An advanced beginner may be able to pick out a winery from the northern coast as opposed to one from the central or southern coast, and, if you’re really good, you may even pick the right varietal. But what does it all mean? And why should you care about the Russian River Valley anyway?!

First, California is massive. The drive from the northern border to Mexico can easily take 15 hours without stops or traffic. Along the way, you have mountains and valleys, bays and cliffs, coastal breezes and mountain air, rain and dessert and quite honestly, almost every environment you can think of. In different pockets of those environments, they grow some great grapes. 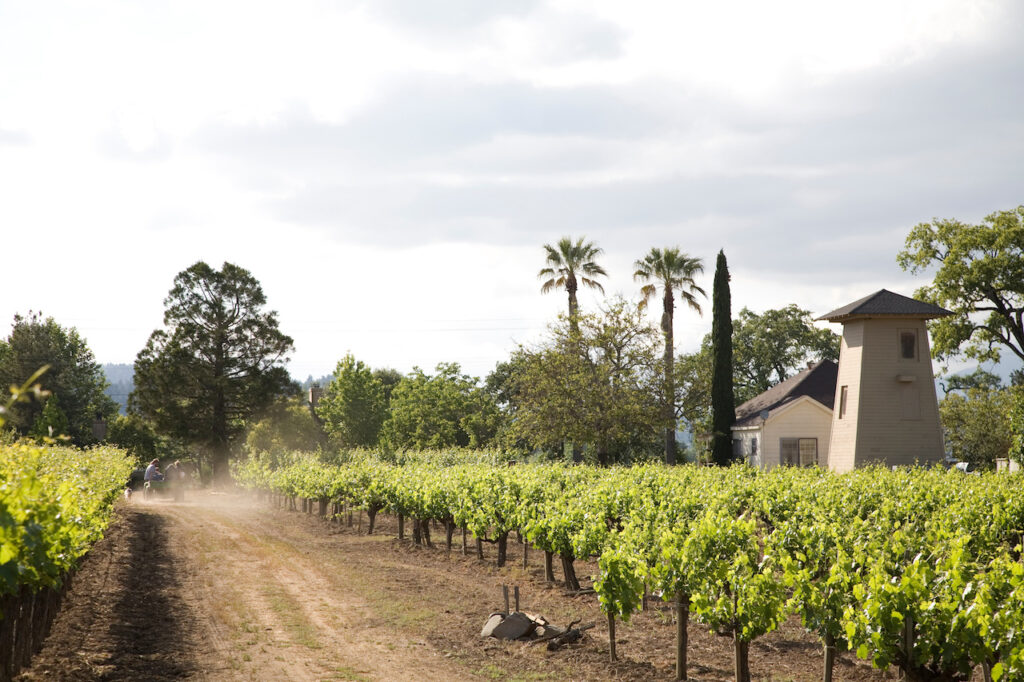 Heading south from Oregon, you don’t really hit any wine country until Sonoma and Napa, two neighboring counties just north of San Francisco Bay. Sonoma borders the sea and is definitely the “country cousin” to Napa’s chichi, sparkling lifestyle. Napa—where Robert Mondavi set up shop in 1966, by the way—is known for its Cabernet Sauvignon, across the board. You’ll want to pair younger Cabs with steak or burgers, but older vintages mellow out to handle other meats. As for white wine, Chardonnay and Sauvignon Blanc are still the way to go, but winemakers are slowly moving away from the popular full-bodied, buttery styles popular over the past few decades. Lying to the east is Sonoma, the county that has the valleys you hear so much of, Russian River and Alexander. The two areas form a J-shape around the actual Russian River as it flows into the Pacific, with Alexander Valley sitting in the northern region. When looking at bottles from Sonoma, Cabernet Sauvignon and Chardonnay are both top bets, with great showings of Pinot Noir and on-trend Rosé. Lately, Beringer, Mount Veeder, Patz & Hall, and Stony Hill have all been receiving accolades for their Napa and Sonoma vintages. 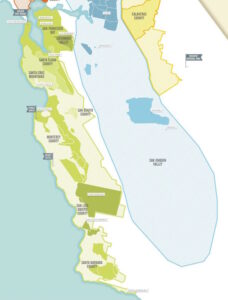 If you keep traveling down the Pacific Coast Highway, you head into the “Central Coast” region, its boundaries from San Francisco to slightly north of Santa Barbara. The first big wine-producing area you would hit is around Santa Cruz and Monterey, a stretch with a popularity and reputation that rivals Napa. The big varietals from further up the coast can still be made into some great wines here, especially the coastal varieties. As you drive inland/south through the flat Salinas Valley, you’re surrounded on either side by mountain ranges. The hills on the Valley’s west side, towards the Pacific coast, are the Santa Lucia Highlands. This is what you want to look for when randomly picking up a Pinot Noir from the region (we liked Drew’s Blend from Carmel Road for our October wine party of the month).

But further down is where the Central Coast gets hot, literally. The wineries around Paso Robles and San Luis Obispo deal with much hotter temperatures during the day (this causes grapes to fill with sugar and tends to create higher alcohol wine), but it does cool down at night (preserving the grapes’ acid). Grapes from warmer European countries do better in this kind of heat, meaning you’ll want to reach for Zinfandels and Rhône-style blends with Syrah and Grenache. The current best-of-the-best is Saxum Vineyards, but those wines are hard to come by. L’Aventure and long-standing Paso Robles vintner Peachy Canyon are two others to look out for.

The last California region worth noting actually comes from the commercial agriculture-rich Central Valley. Lodi has long been known as a region for growing jug wine. A full third of California’s Zinfandel is produced there, but lately, its winemakers have been stepping up their game. Awards have been coming in for local winemakers, most recently when Mikami Vineyards‘ 2013 Zinfandel won a Double Gold at the 2016 San Francisco Chronicle Wine Competition. Also, look for bottles from Michael David, Klinker Brick and Maggio from Oak Ridge.