Five Wine Regions That Should be on Your Radar 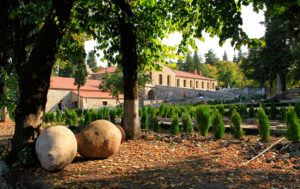 A fun game among wine connoisseurs is “Find the next great wine region.” We already have the masters: France, Italy, California, Australia, New Zealand, South Africa…they’ve all proven their wine prowess. But grapes are grown all over the world, and with so much information available via the internet, winemakers are able to learn new techniques to improve their wines. Plus, everybody loves a little change. Here are five regions getting a lot of notice from the experts.

Georgia – The country, not the state, has a wine history going back to 6000 BC. With near-perfect growing conditions and a rich traditional winemaking culture, they are prime for being the next hot region. It helps that they have a variety of native grapes and are already masters of the current trend: orange wine. Orange wine occurs when the juice from white wine grapes is given a longer contact time with the pressed skins and seeds. Of course, Georgia’s not the only former Soviet republic getting noticed, Moldova is also on everyone’s lips.

Lebanon – You don’t often think of vineyards when you picture the Middle East; but it’s true, they can be found throughout the region. Lebanese wine comes from about 30 houses in the southern Beqaa Valley on the eastern side of the country. The winemakers are predominantly attracted to grapes brought in from France—Cabernet Sauvignon, Merlot, Cinsault, Carignan, and Grenache—but some have recently started focusing on a few native vines like Musar White and Obeideh.

Moravia – On the Czech border with Austria is Moravia. Sharing that cool climate and free from the shackles of Communism, local winemakers began planting Grüner Veltliner and Riesling. The latter has especially had success on the international wine competition circuit, with vintages taking home awards at the 2010 and 2014 San Francisco International Wine Competitions. If you plan to visit, keep an eye out for their indigenous varietals.

Mexico – Wines out of Baja California have been gathering acclaim throughout the past decade. Valle de Guadalupe has that warm day/cool night diurnal shift grapes love, and more than 100 producers have gotten in on the action. You’ll find jammier versions of Cabernet Sauvignon, Merlot, and Shiraz, plus Petit Sirah and Chardonnay.

Tasmania – Though it’s technically a part of Australia, Tasmania should definitely get its own recognition. Being south of the mainland means a cooler climate and one that is just getting good thanks to global warming. You’ll find a lot of the classic French and German white grapes—Riesling, Chardonnay, Pinot Gris, and Sauvignon Blanc—with Pinot Noir and Cabernet Sauvignon in the mix.