Scenes from the French Art of Living: A Perfect Hotel Stay in Champagne

Without doubt, it was the painting in my hotel room that got to me most of all. In fact, I’d go so far as to say that no single detail in a hotel room, in recent memory, has affected me this much.

Last spring, I spent three supernal days in Reims, Champagne’s largest city, along with about 50 writers from all over the planet, as guests of Krug Champagne. Of course, I knew a few things going in about my stay:

1) The region that produces Champagne—the world-standard wine for celebration among everyone who’s ever tasted wine, or not, but also the world standard of elegance and breed for those who know wine well—is a living monument to its own style.

2) And then there’s the Krug part, the part about their quality obsession and stunning quality continuity—which also tipped me off to the kind of rarefied experience I was about to have.

But I was not adequately prepared for The Painting at L’Assiette Champenoise, and all that came with it.

Having been absent from Champagne for ten years or so, I knew nothing about L’Assiette Champenoise, the Reims hotel that has established itself as the region’s leader in both the hostelry and restaurant departments.

I drove north to Reims on a sunny June day, in the late afternoon, after having spent a few rewarding days in Epernay, the region’s second largest city. Things did not get off to a great start in Reims. I was late. The sun was setting. The much larger Reims had lots of suburban development and malls on the periphery, unlike the tighter, more classic Epernay. My GPS was giving me fits, and led me directly to a small one-way street (going the wrong way, of course) which I finally went down after circling three times and thrice Groundhog Daying back to the same spot. After I took the plunge, a motorist passing me in the right direction called me an “idiote.” Guilty as charged.

Most painfully, as I thought ahead to my stay, the hotel I could not find was in a strange area, just a few grubby steps outside Reims proper, in a little non-descript town called Tinqueux.

Was the Epernay success to be followed by Reims desastre?

Pas du tout. As soon as I homed in, the world changed. Around the corner, and inside a protective gate, loomed L’Assiette Champenoise, converted from a charming 19th-century residence. The very sight of it  was pure northern French joy to my eyes.

The greeting was superb, with a bustling team attending to all the needs that a few days on the road can occasion. I might as well have been arriving Royalty on a horse in an 18th century courtyard. 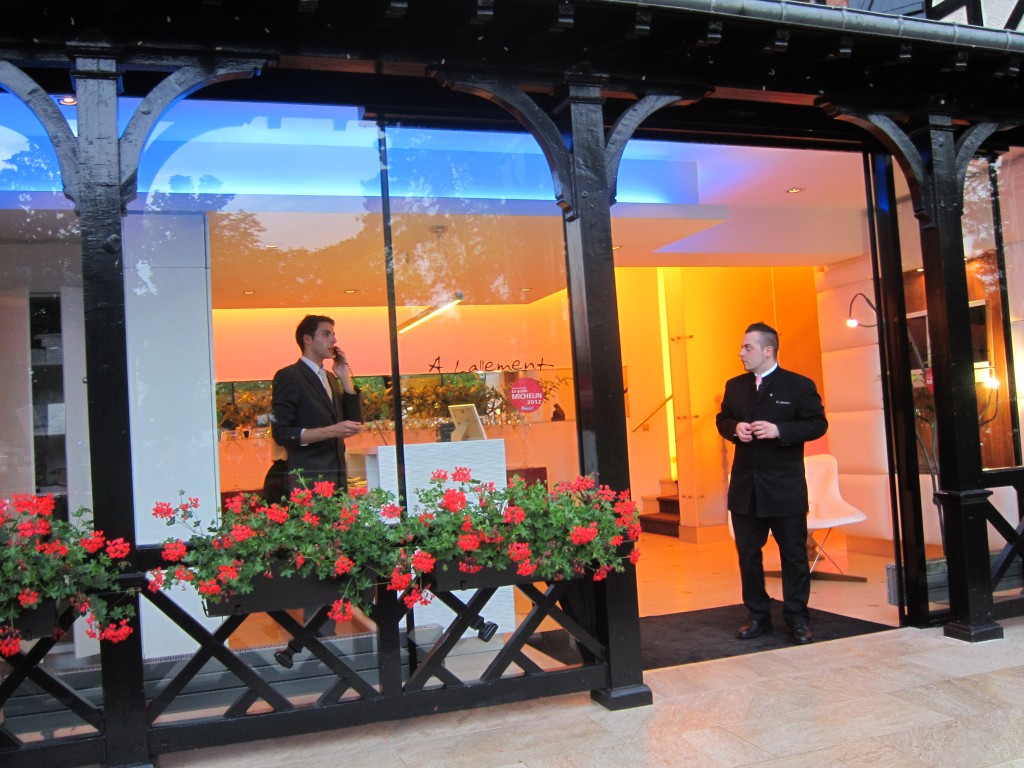 Some of the L’Assiette Champenoise staff at night

And then, the room. The hotel’s in a small park, its greenness and airiness reaching into most of the rooms, as it did mine. I could see immediately that I’d been provided a large suite, so roomy and bright that visions of Champagne parties for three nights danced in my head. I was slightly disappointed that the style was more modern than classic…until I turned the corner, into the bedroom, and saw the monument to the very border of classicism/modernism that was hanging over the head of the bed. 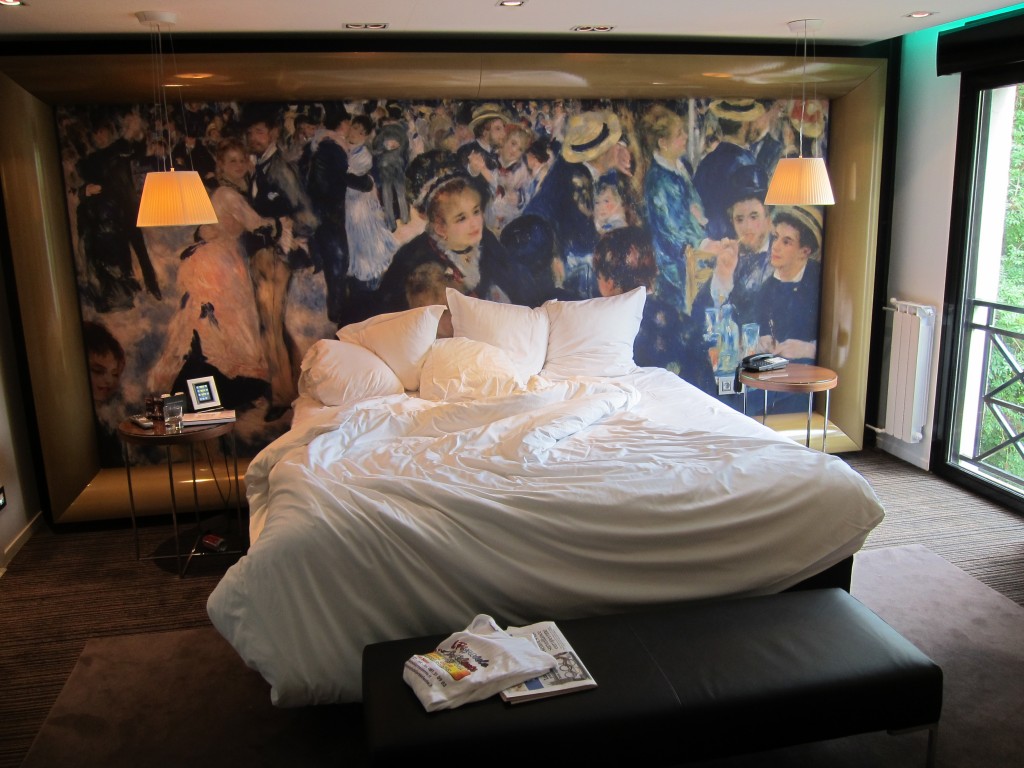 My bedroom at L’Assiette Champenoise

I love Pierre-Auguste Renoir. Particularly in what’s called his “early maturity,” Renoir created astonishing canvases that, to the art historians, found a modern way to depict realistic images while maintaining the subjectivity and emotion of the depictor. The net result is life, life itself, caught for a moment in its bustling, heady flow. But, Francophile that I am, it is the specific life that gives me the chills: the life of French people, with their passionate devotion to beauty, to pleasure, to the fellowship fostered by these elements. This painting, Bal du Moulin de la Galette (Dance at Le Moulin de la Galette), painted in 1876, breathes France, has the almost literal aroma of French wine and flowers, just as his soon-to-come masterpiece would do Le Déjeuner des Canotiers (The Luncheon of the Boating Party); a reproduction of the latter hung over my head in my graduate school bedroom, and never failed to leaven the long nights of study with intoxicating Gallic joy.

A few more details. Though the original painting is about 5 1/2 feet wide…this reproduction is almost 15 feet wide, and over 6 feet high. It dominates the room, of course, deliciously. The detail of a traditionally designed room would interfere with its mighty presence; against the tasteful whites, greys and blacks of this room it roars at you, calling you irresistibly into the 19th century.

If you look at it from far, it’s all you can see. If you look at it above your head in bed, you’ll notice the careful reproduction of brush stroke textures, the skillful job of re-creating color. But then, as you slip into sleep, something else quite extraordinary happens: 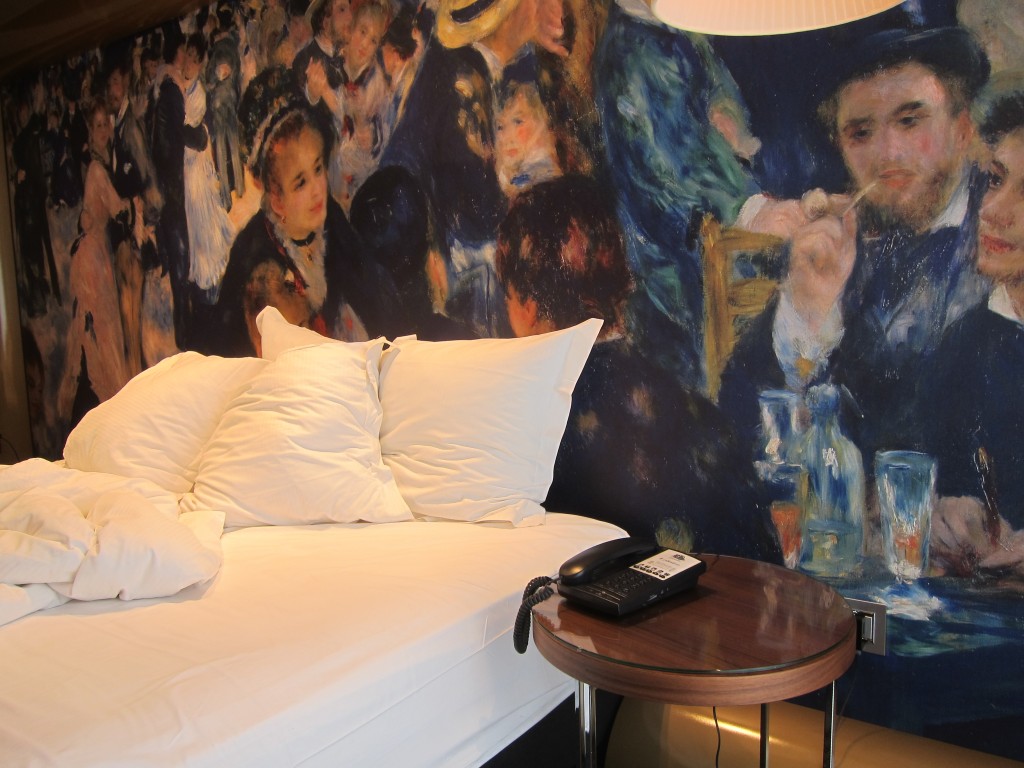 Surrounded by Renoir in bed

But at L’Assiette—at least in my room—it is not only that you wake up gilded by a mysterious patina of French joie de vivre.

Oh, no. Not just that. Because soon, there will be lunch.

Now, allow me to point out (as I always do) that I am not a fan of hyper-modern, hyper-creative cuisine. Ninety-five times out of a hundred, when I’m in France, I’d rather go for a choucroute than a declinaison de rougets des roches en cinq petites morceaux avec une gastrique de blah blah blah.  However, some guys who do this are brilliant. And some guys preserve just enough classicism to keep me interested. And some guys, a very few, manage to find some connection between their creative food and the region in which it’s being served.

Arnaud Lallement—chef of L’Assiette Champenoise, with two Michelin stars in his pocket, and, the rumors say, another one being heavily considered—manages to straddle all three of these challenging categories.

I enjoyed just a single lunch at L’Assiette Champenoise, but I could see right away (well, not so quickly, there were almost 15 courses)…that Lallement’s delicious, light, modern cuisine has a real signature to it, a signature affiliated wih the miracle that is Champagne.

Here are some of the dishes that drove me to that conclusion: 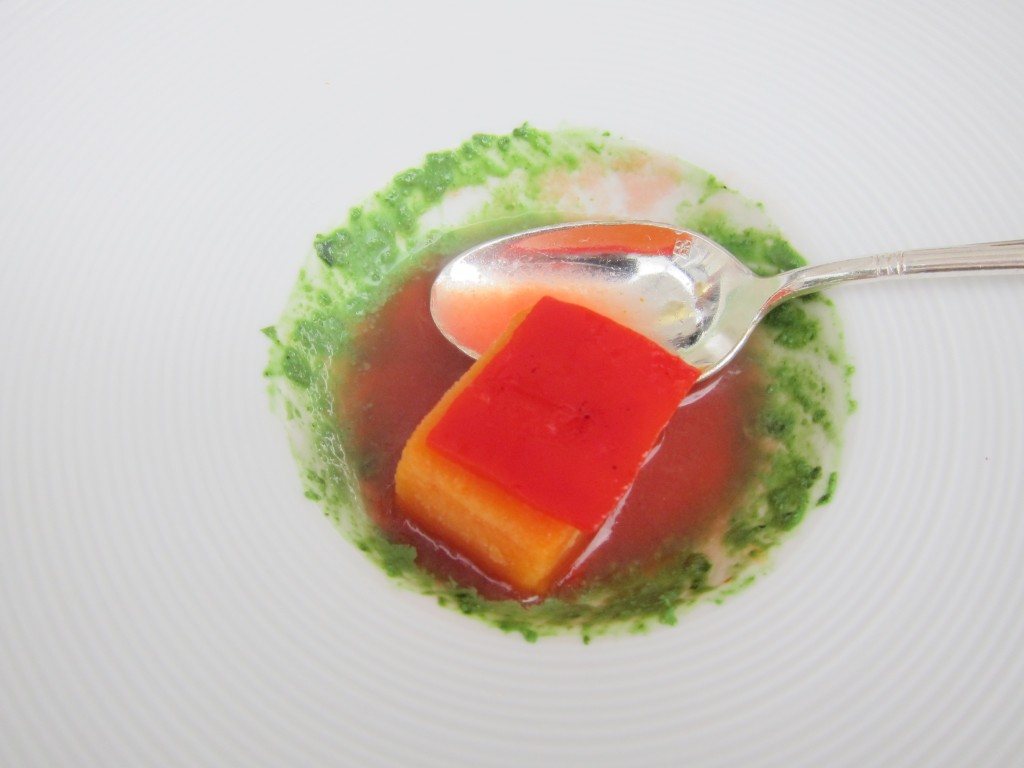 Early in the meal, we were served a tomato sorbet, with a piece of piquillo pepper on top, a runny gazpacho around it, as well as a light crown of pesto. The flavors jumped out of the dish—along with the bright acidity of tomato. 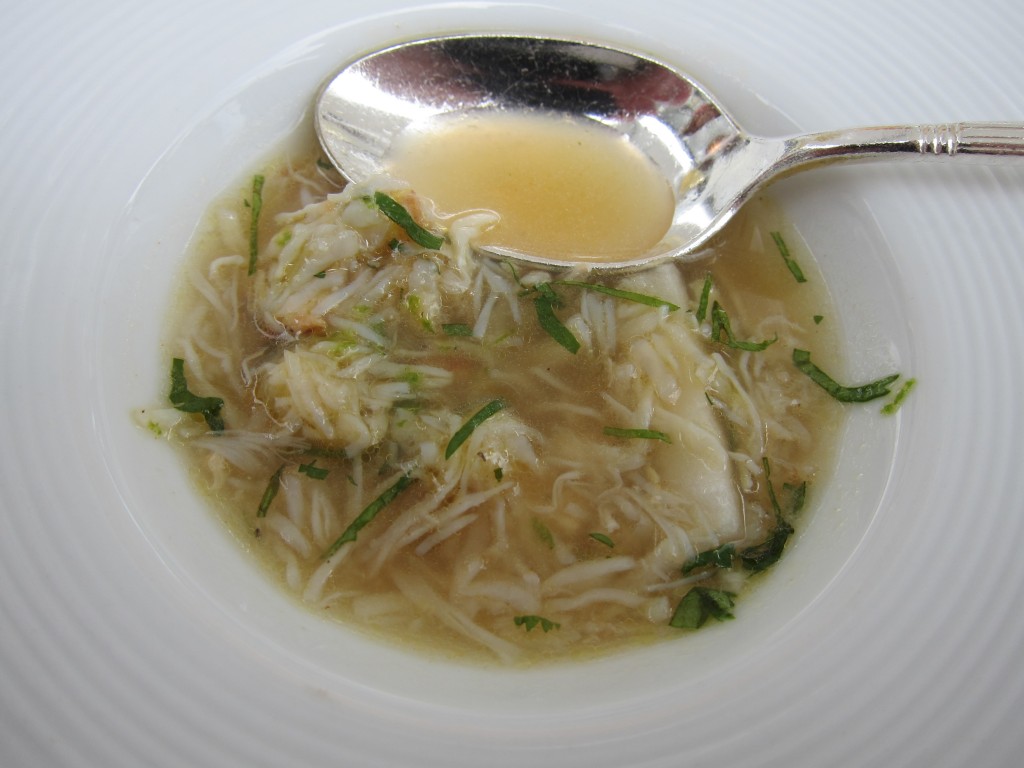 Another early-course hit was a cold consommé of crab, touched with lemon grass, and the brightness of lemon. 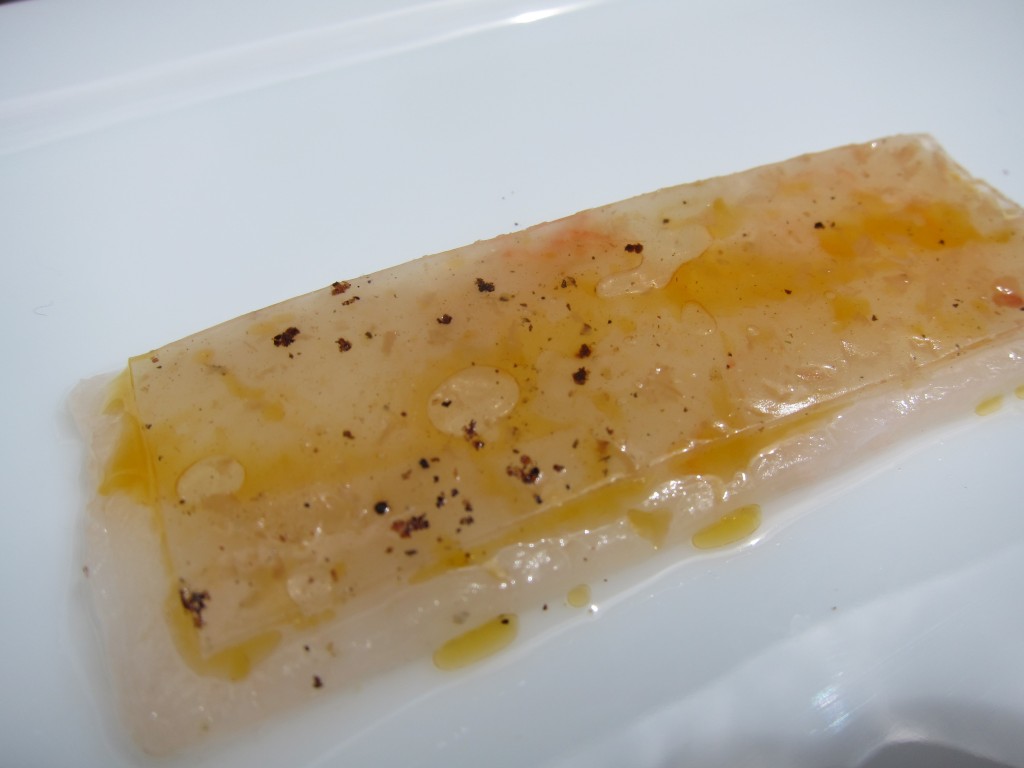 Next up was a tartare of langoustine (in a Jean-François Piège kind of geometric block), with a gelée of dashi, and a zappy ginger confit. 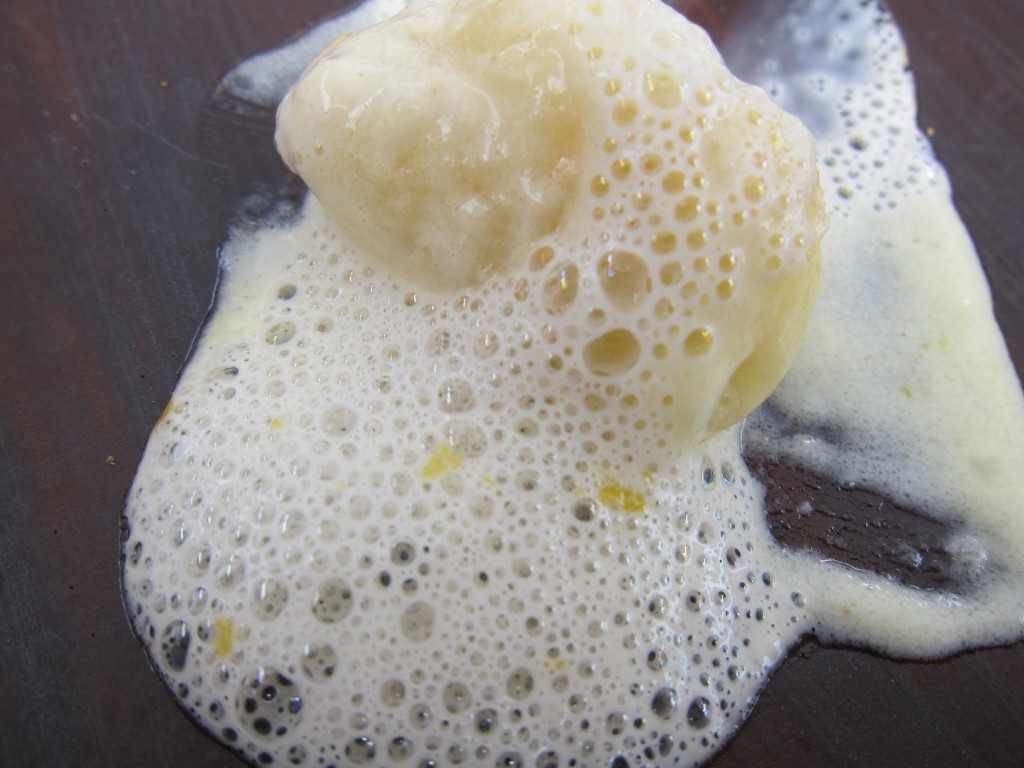 Potato gnocchi were next, touched with pressed fish roe…but in the most acidic foam I’ve ever tasted, bristling with both lemon and vinaigre de Reims. 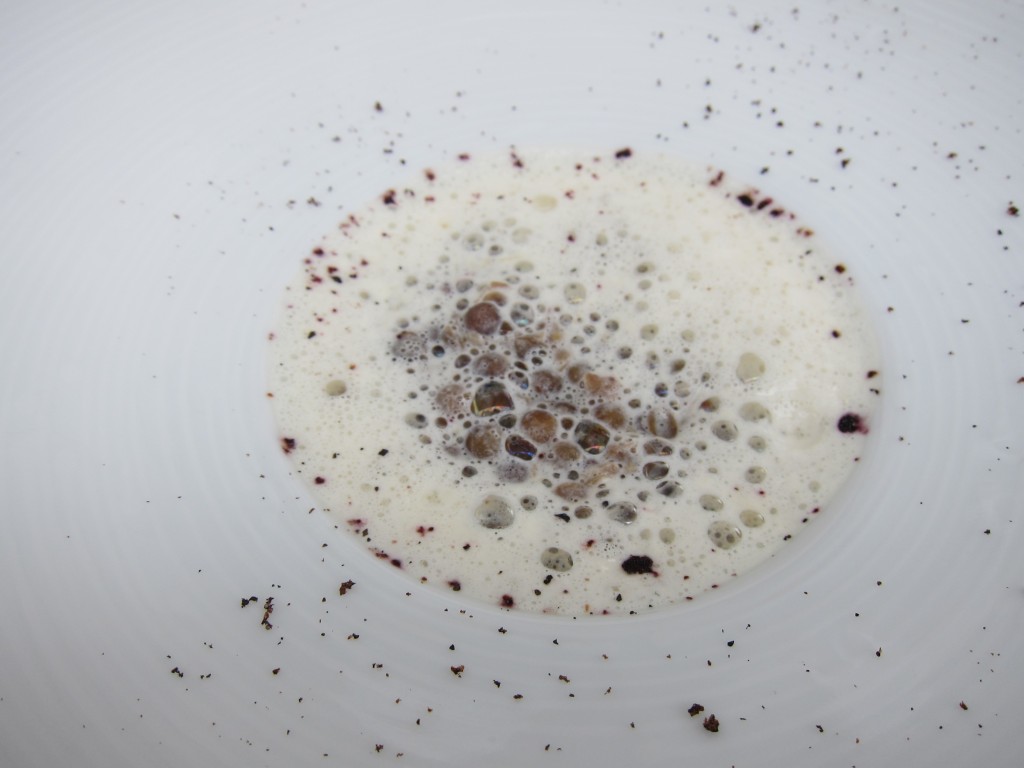 Towards the end of the meal progression, we were served a cold soup, made from cream, Champagne-area lentils, bits of pig’s feet, Tasmanian pepper…and, to be sure, a tangy mustard made in Reims.

When I spoke to Lallement after the meal, he helped me draw the line through all of these dishes. “I am in Champagne,” he said. “Is there anything more thematic in Champagne than wines with great acidity? Of course, acidic wines are perfect with acidic foods…which, paradoxically, lower the impression of acidity. So,” he continued, “in my cuisine Champenoise, I go for lively acidity as a way to perfectly complement the wines.” Which you can see in all of the dishes above.

But this gastronomic detail at L’Assiette Champenoise is not just about a function on your tongue. For is it not the case that nothing in food or wine has the same verve that acidity has? That acid confers elegance on wine, a kind of zappy joy, a form of energy? Imagine a piece of mackerel…then imagine the lift it gets from that perennial squeeze of lemon. Are you not adding “elegance and verve and joy,” as it were,  along with a squeeze of lemon?

It is in this regard that I think of Lallement’s food as not only in tune with the wine of his region, but also with the emotion and profile of his region. Just like the painting up in my room, three floors above the restaurant.

But things get a little more complicated in this kitchen. For the next inevitable question is: well…which Champagne for which dish? Happily, Lallement has covered that ground for you. “When I create a dish,” he says, “I’m thinking about which Champagne should accompany it.”

It’s no easy job. L’Assiette Champenoise has, believe it or not, the wines of 115 different Champagne producers on its enormous list—most producers represented by at least six different bottlings, some many more. It is a staggering collection of local juice.

But Lallement takes this train of thought even a step further. “When I create something new in the kitchen,” he told me…”I am also thinking about which Krug Champagne should accompany it.”

Voila. It is no secret that this restaurant is a special place in Reims for Lallement’s favorite Champagne, which is Krug. Lallement has quite a special connection to the venerable house, whose entry-level Champagne, the wonderful Grande Cuvée, is much more expensive than most entry-level Champagnes. So it was not being offered by the glass in Reims restaurants…until Lallement contacted Krug, twelve years ago. “I asked them,” he told me, “if I could have the honor of serving the first Krug by the glass in Reims. It was a big risk for them. Who was I? L’Assiette Champenoise had no Michelin stars. We were nobody. But they liked my spirit…and they said yes.” Today—after the bestowal of one Michelin star in 2001, two in 2005, and the possibility of a third in 2013—L’Assiette Champenoise is offering other Champagnes for as little as $18 a glass. Krug Grande Cuvée—the only by-the-glass Champagne that’s named on the list—sells actively for $45 a glass.

The most expensive bottle of all? The magnum (two bottle’s worth) of 1973 Krug Collection (a vintage wine released late by Krug); its cost at the restaurant…is a mere $6100.

“Krug is my Champagne,” Lallement proudly says. “It is the most beautiful expression of the grapes in Champagne…and it is the reference for gastronomy.”

I asked the chef, finally, to descibe one of those dishes he created with Krug in mind…and which Krug?

Easy. “Every Krug has a different kind of acidity. The Clos du Mesnil (Krug’s acclaimed single-vineyard Chardonnay Champagne) has perhaps the brightest acidity of all. So I designed my langoustine tails, with an acidulated ginger broth, to meet the wine note for note. And it doesn’t hurt that Clos du Mesnil’s unusual body (for an elegant wine) stands right up to the rich shellfish.” 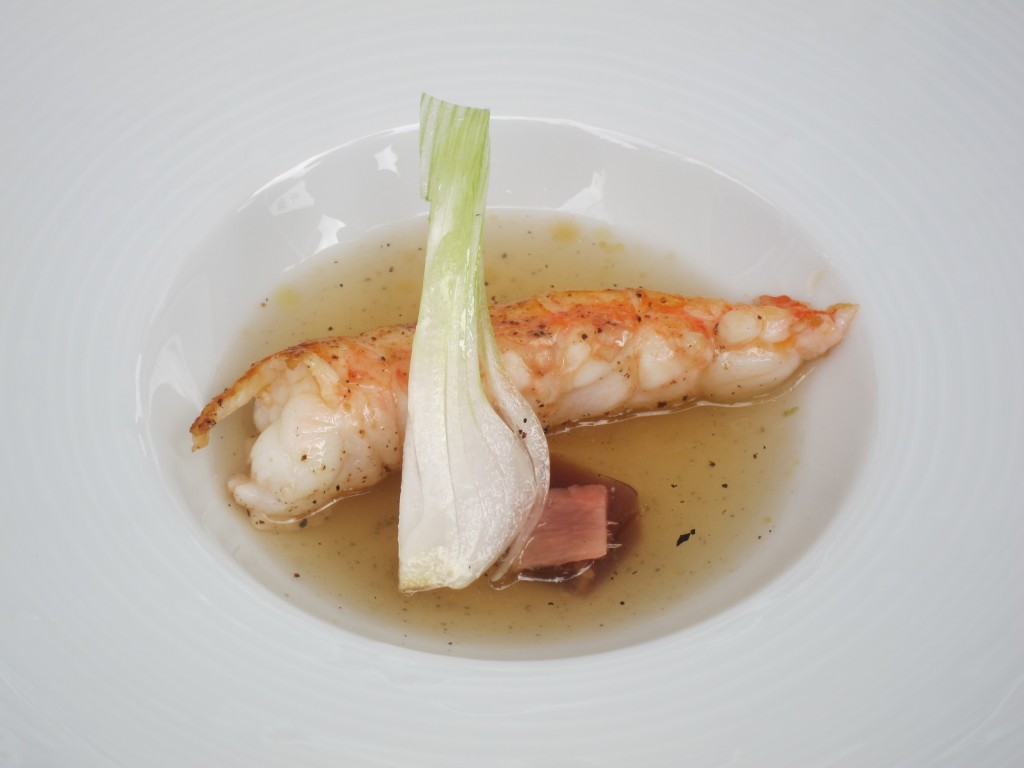 So I leave it to you to put it all together, if you want to know Champagne. Come with money. Then, move into chambre #33 at L’Assiette Champenoise, at $500 a night (the rooms go up to $750, for a suite with a terrace). Enjoy the warmth of the Lallement family, and by all means dine at the restaurant, drinking you know what. The gestalt effect, will be, I predict, to lift you onto a cloud of Champagnosity…which, to me, is equivalent to everything that’s fine about life.

Particularly if you glance over your head as you approach your slumber.