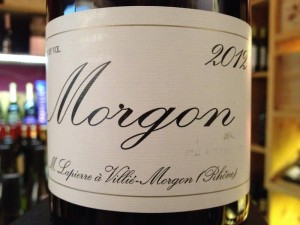 The Beaujolais Nouveau “season” is over (people usually drink BN from November until summer), so it’s time to start thinking about the regular Beaujolais wines made in 2013, 2012, or even older. Frankly…though I LOVE Beaujolais Nouveau…its international success has been a disaster for the marketing of regular Beaujolais around the world. Especially as being made today, “regular” Beaujolais is glorious stuff, much richer and more complex than the holiday-time Nouveau.

A great place to start, of course, is with what we call the Beaujolais “Crus”—ten villages that make such good Beaujolais, they’re allowed to call their wines by the name of the village; most of these labels don’t even say “Beaujolais.” Such it is with this wine, the 2012 Morgon (significantly, imported into the U.S. by mega-star Kermit Lynch). Encouragingly light garnet-purple. A gorgeous kind of fruit soup on the nose, with just an edge of warmed strawberries busting through. Young Beaujolais often shows strawberry, but this one does it in a mysterious, sophisticated way. Exquisitely balanced palate, juicy and refreshing. Lots of vibrant acid, with just a nick of tannin.

Beaujolais honchos know that Morgon is one of the villages making wines that age (ten years is normally considered a good bet for good ones)…but this baby is truly delicious right now.