What’s All the Buzz About “Orange” Wines? 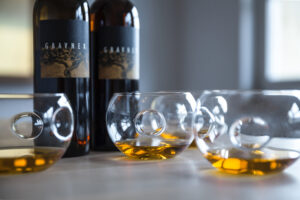 The rosé revolution is in full swing, and while many consumers have joined in full pursuit of drinking pink, another shade has captured the hearts and palates of wine cognoscenti. Could orange become the new pink in terms of trend? More correctly referred to as “amber wines” (keep the orange references to your morning glass of citrus!), these tantalizing wines, whose colors can range from apricot to ocher, will tease and most likely test your palate.

To the uninitiated, amber wines can have a heavier and funkier taste that may at first seem a tad “off.” Some have a distinct barnyard aroma; others smell and taste slightly oxidized or nutty, similar to a dry sherry. But don’t turn your nose up just yet! As these wines open, they can reveal a delightful mosaic of freshly sliced stone fruits, piquant spices, crushed almonds and walnuts, and fresh herbs. What’s more, amber wines are extremely versatile in food pairings, from seafood and roast pork to sharp and blue cheeses. Give them a chance and you just may become hooked! 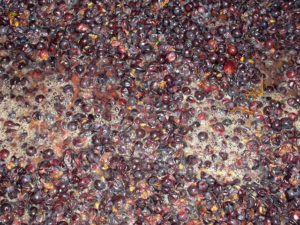 So, what exactly creates this spectrum of colors?  It starts with skin contact during maceration. Sommelier David Foss, who curates the wine list at Anfora, a wine bar in Manhattan known for its natural wine list, explains it simply: “Amber/orange wine is white wine made like a red wine. Ninety-nine percent of the time red wine gets its color from the skins as the [actual grape] juice is clear. If you take a white wine and let it sit on the skins it takes on an orange/amber hue.”

Foss noted, “Depending on the grape and the practices of the winemaker, these vary wildly in style. Denavolo Catavela from Emilia-Romagna in Italy, for example, is light and a bit tart. It’s made in a more natural style with little to no sulfites in the wine. Over the past fifteen years, others have started play[ing] with trying to make more refreshing amber wines. These tend to have a shorter maceration. Some don’t look very orange or amber, but they still have the heavier texture. I usually refer to these as baby orange wines (though many wine professionals give me flack for calling it that).”

Some amber wines can mimic red wines, added Foss. “Some traditional Georgian style wines with very long macerations on the skins (e.g., two to six months), drink like red wines. I’ve had some that are just as tannic as some big boy reds, like Cabernet Sauvignon.” 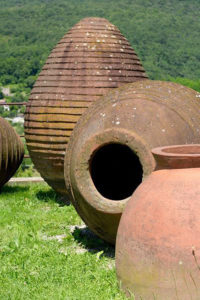 Amber wines are nothing new in the world of winemaking. Nearly eight thousand years ago in the Caucasus region of Georgia  (now the Republic of Georgia), these wines were produced utilizing a natural process of fermentation in giant hand-made conical clay amphorae called qvevri (pronounced keh-VEH-vry). This centuries-old custom of making wine nearly died out when Georgia was occupied by the Soviet Union (between 1922 and 1991), who wanted more “modern-style” wines made with international grapes and which utilized state-of-the-art technology over time-honored traditions. In fact, the Soviets ripped out many of Georgia’s native grape vines and outlawed qvevri winemaking!

Fortunately for wine lovers, Georgia gained independence, and some producers have revitalized the qvevri practice (now recognized by UNESCO as an “Intangible Cultural Heritage”). Today, amphorae are used by esteemed producers like Elizabetta Foradori, located in Italy’s Dolomites (Alto Adige), Mas Martinet (Priorat, Spain) renowned for its sultry red wines, and Josko Gravner, a biodynamic winemaker in Friuli. Gravner is credited for introducing amphora production to Western Europe. Closer to home, Oregon’s Beckham Estate, is a newer winery (established 2005) that utilizes amphorae as does and Dr. Konstantin Frank (Finger Lakes, NY) for its Rkatsiteli amber wine.

Most amber wines are produced by vintners who focus on making natural wines (a.k.a. “raw wines”). This means the vintner uses minimal intervention in the winemaking process such as natural fermentation, no (or super low) fining or filtration, and eschewing stabilizers such as sulfites (sulfur dioxide) and additives (e.g., yeasts and sugars) to enhance flavor or coloring. Just as many consumers have embraced eating natural foods, free of preservatives and additives, eco-conscious wine drinkers are opting to drink au naturale. There is even a touring Raw Wine Fair where natural wine geeks can taste organic, natural, and biodynamic wines.

Amber wines are slowly making waves across America thanks to passionate sommeliers who’ve embraced them. They may not be the tsunami that rosé consumption has become, and they may be an acquired taste for many, but they are certainly worth giving a try if you want to add a little diversity and color into your wine wardrobe.

Time to add more color to your wine style? Try these amber wines:

*scroll down on the webpage to find Kisi grape information

Vinoterra Rkatsiteli 2014 (Khaketi, Georgian Republic). Made in qvevri from the native Rkatsiteli, one of the world’s oldest varietals. This wine is medium-bodied style with aromas of apple and pear and flavors of honeyed quince and tahini-like nuttiness. $15

Gravner Bianco Breg 2007 (Friuli-Venezia-Giulia, Italy). Josko Graver is a biodynamic producer who ferments his juice in clay amphorae. A blend of Sauvignon Blanc, Chardonnay, Pinot Grigio and Riesling Italico, this wine has apricot and sandalwood notes $95

Dr. Konstantin Frank Amber Rkatsiteli 2016 (Finger Lakes, NY). The winery features some of the oldest vinifera grapevines in the United States. This wine made from Rkatsiteli is medium-bodied with notes of cloves, grapefruit, honeysuckle, and sweet basil. $35

Movia Rebula 2014 (Goriška Brda, Slovenia). Made from one-hundred percent Ribolla, a white grape cultivated in Slovenia and Friuli, this medium-bodied wine is gently oak-aged with notes of black currants and golden gooseberries. $26