The “Valley of Many Cellars” Opens Its Doors 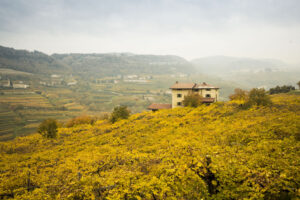 The “valley of many cellars” (as its name translates to) is overflowing with exquisite wine including world-class Amarone.  But there is more to discover in Valpolicella. The third largest wine producing region in Italy, Valpolicella has been referred to as  “the pearl of the Veneto.”  At first glimpse of its beautiful landscape of rolling hills packed with vineyards, olive groves, and cherry orchards, the reason becomes clear. Nestled in an idyllic location between three of Italy’s world-class tourism destinations, Valpolicella is located north of the city of Verona, east of Lake Garda, west of Venice, and south of the Venetian Alpine foothills of Lessini.  It’s no wonder that for centuries Italian aristocrats and wealthy Venetians have been drawn to the region for its moderate Mediterranean microclimate. The many splendid tucked away palazzos and estates can attest to that!

Valpolicella is both the name of the region and the wine or actually four specific PDO (Protected Designation of Origin) styles of wines, produced within three key areas of production: Valpolicella, Valpolicella Classico and Valpolicella Valpantena. Vineyards are planted using the pergola method, a formation that looks like a row of leafy umbrellas. This method serves to shade the sensitive grapes from the hot Italian sun. In the higher hills, vineyards are planted in terraces on the rocky limestone soil, which requires grapes to be hand-harvested.

DOC (Denominazione di Origine Controllata) guidelines carefully designate how these wines are made. Corvina, which adds color, aroma, and tannin, is the primary red grape. By law, Valpolicella must be made with 45 to 95 percent Corvina. Rondinella, which adds floral notes, must comprise five to 30 percent. Corvinone, which adds rich cherry notes, can comprise up to 50 percent of the blend. Other native varieties used for blending in smaller amounts may include Molinara (for acidity) and the rarer Oseleta (“little birds”) for color and tannin. 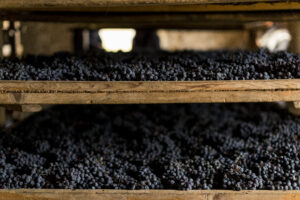 During a recent trip to visit nearby Lake Garda, I had the chance to visit wineries in Valpolicella. Then, In New York, I attended a focused tasting of Amarone (a very highly regarded type of Valpolicella) hosted by Consorzio Tutela Vini Valpolicella, an organization founded in 1924 of local (to Valpolicella) grape growers, winemakers, and bottlers. Through both experiences, I learned that while Valpolicella wines may be produced from the same grapes, there are four delicious distinctive styles to enjoy. Maybe that’s why the name “Valpolicella” means “the land of many cellars!”

Valpolicella DOC. The writer Ernest Hemingway famously drank this lighter red wine and paired it with shrimp scampi while recovering in Venice from a plane crash.  In his novel, “Across the River and Into the Trees,” the protagonist, Colonel Cantwell, drank Valpolicella noting it’s “better when it is newer. It is not a grand vin and bottling it and putting years on it only adds sediment.”

Hemingway’s observation is spot on.  Valpolicella Superiore is a younger wine,  fermented in stainless steel for seven to ten days. The result is a light bodied fruit forward, fresh-tasting red. For a “Valpolicella Classico Superiore,” the wine must be aged a minimum of one year with an alcohol level of at least 11 percent.

Pairings: The fresh cherry aromas and softer tannins are perfect for a casual supper or lunch of pasta, pizza, salads and simple fish dishes.

Valpolicella Ripasso DOC.  This medium-bodied wine has been referred to as both “Valpolicella on steroids” and “baby Amarone.”  It’s a marriage of the two wines, and the best of both, thanks to its fuller ripe cherry fruit flavors and comparatively favorable price point ($20-$30 a bottle versus $50 and higher for Amarone).  To make a Ripasso, Valpolicella wine is macerated and fermented for a second time in the residual must (the leftover grape seeds and skin) of an Amarone wine for about seven to ten days. Thus, the name “ripasso” which means passed through again.

Pairings: The ruby wine is filled with deep dark cherry flavors and once aged, a wisp of vanilla. Perfect for charcuterie, roast chicken or duck, hearty soups, lasagna, and eggplant parmigiana.

Amarone della Valpolicella DOCG. A vintner’s oversight in 1936 gave birth to this iconic wine referred to as the “King of Valpolicella.” While attempting to make the sweeter Recioto (a dessert wine of Valpolicella), a winemaker accidentally let the wine ferment for too long which allowed the yeasts to dissolve all the sugars. The result was a deep, dark, drier red wine with a high alcohol content, averaging around 16 percent.  Amarone, which translates to “bitter wine,” was born.

Amarone is more labor intensive to make. It takes more grapes to make the wine since the winemaker is working with shriveled grapes. This extends the process much longer. As a comparison, two bottles of Ripasso can be produced for every one bottle of Amarone!

This process of making Amarone is called appassimento. The picked grapes clusters are laid in wooden racks or crates in a large airy room for three to four months to dry.  Historically, vintners placed grapes in wooden boxes or on straw mats or hung them in vertical rows like curtains in a barn to air naturally. These days, grapes lay in stacked plastic boxes in temperature controlled rooms which minimize the risk of rot. After the drying period ends, the grape clusters are de-stemmed and crushed. DOCG regulations state that the crush must occur after the end of January. At a recent presentation on Amarone della Valpolicella wines held at Black Barn Restaurant in New York City, guest speaker Andrea Sartori, president of Casa Vinicola Sartori, noted that increasingly warmer temperatures are forcing vintners to move up the process and crush even as early as mid-late December, and guidelines may need to be revisited.  Amarone “normale” wines are aged two years following the vintage, and a “riserva” is aged four years.

Pairings: Amarones can range from intense blackberry to spiced bittersweet chocolate and they age very well into soft velvety wine.  A juicy steak, wild game, lamb chops, and truffle risotto pair well as far as savory dishes go. But Amarone is also a wine you can savor at the end of a meal, like a fine Port, with a wedge of hard aged cheese and dried fruit.

Recioto della Valpolicella DOCG is a lush dessert wine produced from dried Corvina with blends of Rondinella, Molinara or other local grapes. The grapes are left to dry for 120-150 days before fermentation is stopped to preserve the sugar content. This jammy-rich wine is filled with flavors of dried raisins, blackberries, and touches of spice. If Amarone is considered the “King of Valpolicella,” Recioto could be called the “Emperor’s Choice” as it was a popular wine at ancient Roman banquets. But the actual translation of the name “recioto” means “ears” referring to the shape of the dried grape clusters.

Pairings: The sweetness of a Recioto complements Gorgonzola or other blue cheeses, sweet cakes, and biscotti.

Truly, the land of many cellars, Valpolicella offers numerous styles to enjoy and pair – from the start to finish of a great meal. Just take it from “Papa Hemingway” who had an appetite for the good life!