Molly, on the Range, with 12 Hens Named Macaroni 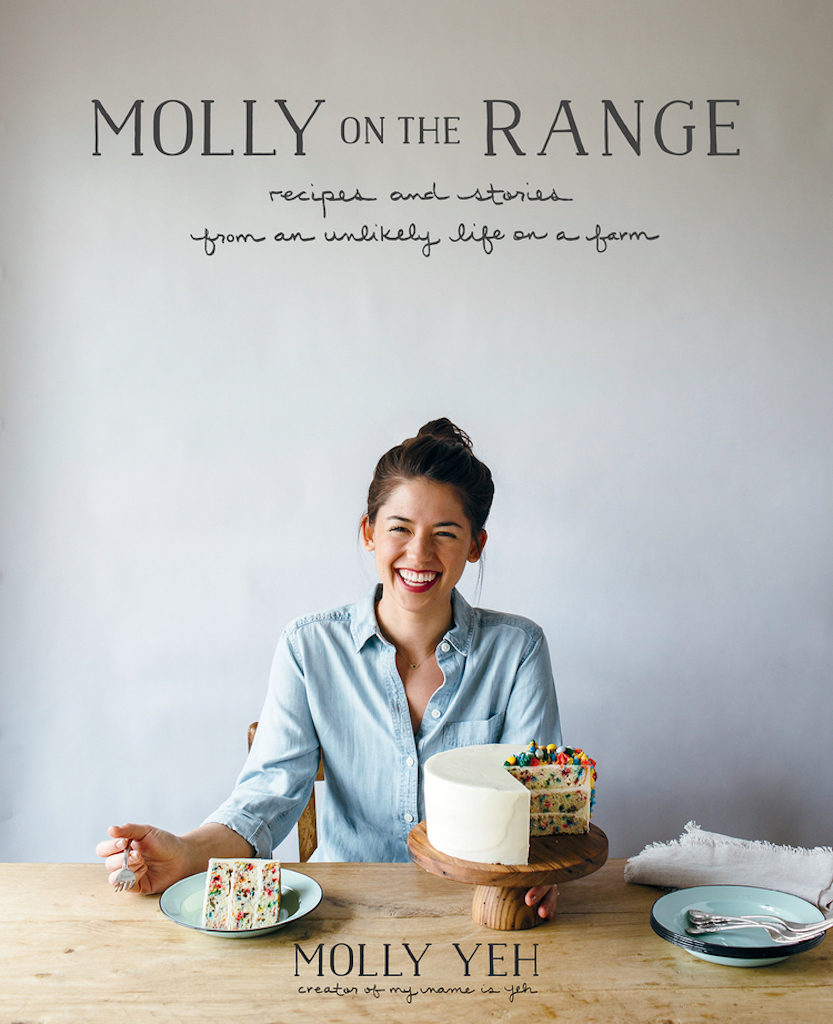 For most people, moving to a sugar beet farm on the outskirts of Grand Forks, North Dakota (population: 98,000) from an apartment in the heart of New York City (population: 8.5 million) is unthinkable. But that’s exactly what Molly Yeh (pronounced Yay) did, all in the name of love. It meant giving up 24-hour delis, pizza delivery, stores full of the spices needed to make tikka masala or za’atar. In return, she expanded on the cooking and baking skills she’d honed as a member of New York City’s food blogger royalty. And this past fall, she published everything she’d learned, along with a few glamor shots of her chickens, in the cookbook Molly on the Range: Recipes and Stories from An Unlikely Life on a Farm (Rodale, 2016).

The urban/rural divide in America is perhaps at its strongest, and not just politically. The chefs and sommeliers in our great “food cities” are creating exciting dishes and sublime pairings, pushing our general food culture forward. But dive deep into our “fly-over” states and you’re seemingly back into the old days of casseroles and Jell-O salads, with ingredients picked up at the nearest SuperTarget. It’s kitchen geniuses like Molly who are poised to bridge that gap. Growing up in a Jewish-Asian household in the Chicago suburbs, Molly wasn’t one of those gourmand babies who snacked on Dungeness crab or knew the difference between Prosciutto di Parma and San Daniele before she hit pre-K. She readily admits to her childhood self’s propensity for Wonder Bread binges, Lunchables, and anything else “white, orange, or brown.” During her teenage years, she discovered her palate, and it only deepened while studying percussion at Juilliard. Those years in the city meant all-nighters to specifically get Doughnut Plant’s sweet squares of fried dough at dawn, visiting almost all of the new-fangled food trucks including her favorite, Schnitzel & Things, spending “all of [her] work-study money” on a Minetta Tavern burger, and ultimately, sharing it all on her food blog “My Name is Yeh.” Juilliard would also introduce her to the man, nicknamed Eggboy, who would, in short time, go on to convince her that moving 1500 miles into the uncharted territory of northern Minnesota, near the border of South Dakota, was a good idea.

In reality, it’s a predicament many former transplant New Yorkers face when they finally return home: “Now that I’m here, how do I eat the foods I had there?” Sure, some just give up and go back to the usual Midwestern menus they grew up with. Some open a Brooklyn-esque cafe/bakery/craft beer bar. But living on that sugar beet farm, Molly didn’t want to go either of those routes. She was determined to recreate the meals she’d fallen in love with—she’s also spent time in abroad, namely Israel where she has had some of the best breakfasts of her life—and she draws creative inspiration from those dishes. So, she gives you fantastic recipes for Hummus, Shakshuka, and Gruyère Mac & Cheese, but then you turn the page to find Spinach & Feta Rugelach, Quinoa Carbonara, and Pimento Cheese Babka. She’s also embraced the specific Scandinavian food culture of the northern Midwest and devotes pages to Cardamom Vanilla Cake, Marzipan Mandel Bread, and Sweet Potato Lefse—a tradition that earned her a visit from The New York Times’ Sam Sifton. 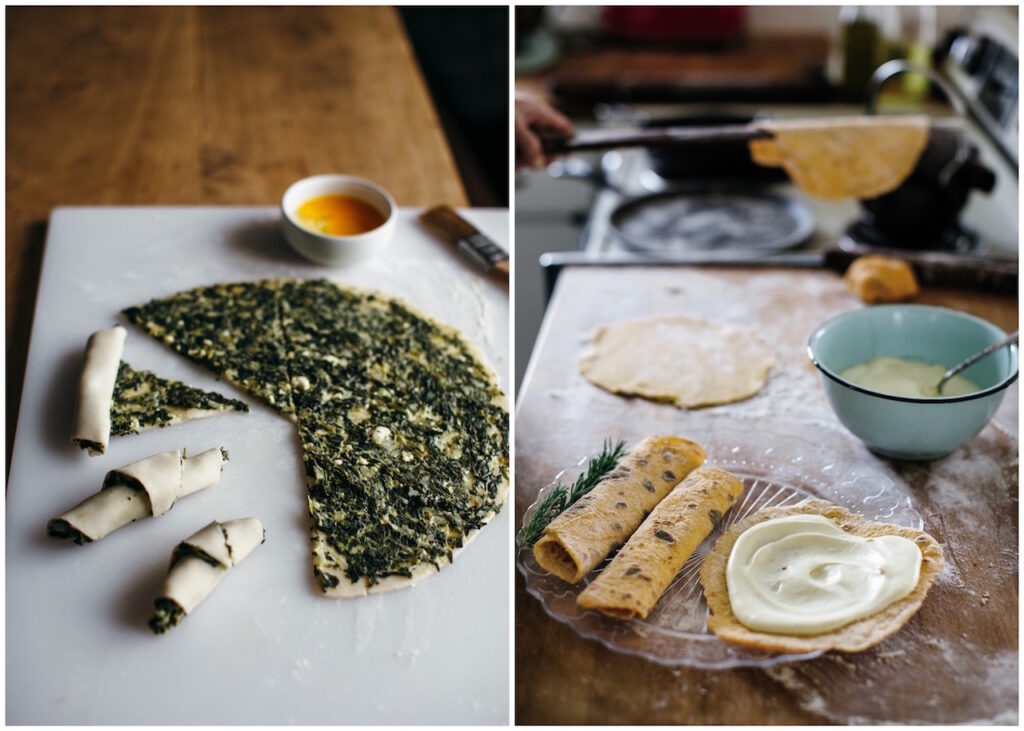 Molly on the Range is separated into four easily recognizable sections: Breakfast and Brunch; Mains (And Some Other Fun Stuff); Snacks and Celebrations; and Desserts. Within the 270 pages are about 100 recipes, with every section having a few opening pages of backstory and every recipe, and even every part of a recipe, including some interesting note or tidbit. The bulk of those are savory, and even some of the sweet ones are a little savory (Molly is a huge fan of marzipan). Molly also has to frequently work with special diets and gives instructions for those needing gluten- or dairy-free alternatives. But what I, and many readers without the physical or financial means to make it to a specialty grocery, will thoroughly appreciate is the use of those everyday ingredients, the kind you can find at literally every grocery store in America. Yes, fresh vegetables would be nice, but you can get along fine with frozen. You can make your own pie dough, but feel free to just use the pre-made kind. No Gruyère within 100 miles? Sub in Swiss.

Her approachable tone throughout the book is a carry over from those blogging days and it transpires into a certain easygoing style across the board. Specialty tools are great, but spätzle can be made with a slotted spoon and your hand-me-down food processor will get the job done (until it doesn’t), but you will need to be super awake and super ready before you even decide to make halva for the first time. Molly spends hours in her kitchen in God’s country, Minnesota making due with what she has on hand, why should you need some $20 gadget specifically for one dish. She’s your friend, she’s been there, she knows, and if it comes out wrong, tweet at her and she’ll help you figure it out. None of the recipes are too involved for the average home cook, and any time there is some complexity, Molly lays it out in the header notes, along with any tricks she’s picked up.

With its playful takes on the traditional and simple classic American dishes, Molly on the Range is a great choice for those newly arrived to the big city, but also for your mom in Ohio who wants to perfect that delicious pistachio loaf she had in Brooklyn, after doing a delicious riff on al pastor tacos with cauliflower. Want to test out a few recipes over the holidays? We suggest the Spinach & Feta Rugelach, Tomato & Squash Soup, and Sweet Potato Lefse with Rosemary Cream.