“For better and for worse, Juilliard was an itsy-bitsy community of 800 students from all over the world, but mostly New Jersey and Asia. All of the rehearsals, classes, and offices were in one building in Lincoln Center that was five stories above the ground and five stories below, and had little hidden treasures throughout, like a wig shop where students could get cheap haircuts and a very well-stocked candy bowl in the head of chamber music’s office. It wasn’t uncommon to run into visiting artists like Gustavo Dudamel or Lang Lang, and once I was snooping around the fifth-floor orchestra room when I was drafted to teach a B-list Sesame Street character how to play the crash cymbals for a taping with Alan Gilbert. It was a really exciting place to be, and a major thing that I learned early on was that going to school in sweatpants like I did every day in high school wasn’t going to fly.

In Mary Anthony Cox’s ear training class, I sat in the same seat in the same room that my dad had sat in 30 years prior, and though she’d normally address everyone with “now, honey,” she slipped once and nearly called me by my dad’s name. Juilliard was a home and a family. There were practice rooms to hide in if you needed a good cry, but everyone always knew what was up, so truly hiding your stress was never really an option. It was smothering at times, but on most days I was grateful for the familiarity of it all because being away from my actual family wasn’t always easy.

Often I’d get care packages from my mom that included tchotchkes for my dorm room and always a batch of her rugelach or cookie bars. I probably could have hoarded them in my mallet bag and no one would have noticed, but I loved the excuse to deliver them all over and schmooze with my friends. The arrival of Jody’s Rugelach was a really good reason to sit in the dance and percussion hallway and commiserate about a difficult music history quiz or the vibraphone passage with awkward stickings.

My mom’s rugelach are typically filled with chocolate chips and cinnamon sugar. And if that’s what you’re looking for, head over to Molly O’Neill’s New York Cookbook, because that’s my mom’s go-to recipe. This is my savory twist on rugelach that, full disclosure, started off as a spinach pop tart. When my mom was testing the recipe though, she “accidentally” rugelach-ed it and created what’s in my opinion, a much better ratio of crust to spinach.

The filling on its own is also really good! It’s a cheesy creamed spinach that’s kind of janky because I’m never in the right mindset to actually cook the frozen spinach block and drain it before adding it to the pot; but if that grosses you out you can get rid of the liquid beforehand. It actually doesn’t make a big difference here. 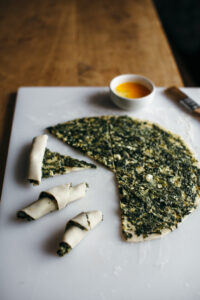 Preheat the oven to 425ºF. Line two baking sheets with parchment paper. Set the frozen spinach out on a plate at room temperature to soften slightly.

In a large pot, melt the butter over medium heat. Add the onion and a pinch of salt. Cook, stirring often, until the onion is soft and translucent, 5 to 7 minutes. Add the garlic and a few turns of black pepper and cook for 1 more minute, until fragrant. Add the flour and stir to combine, then stir in the heavy cream.

Give the frozen block of spinach a rough chop and stir it into the pot with a good pinch of salt. Cook, stirring, until the spinach is heated through and the mixture is combined. Stir in the feta, lemon juice, and hot sauce and then remove it from the heat. Taste and adjust seasonings as desired.

Roll out half of the dough on a lightly floured surface until it is a large round, about ¼ inch thick. (If using store-bought pre-rolled dough, simply unroll it onto your surface.) Spread on half of the spinach mixture in an even layer so that it covers the dough. Using a pizza cutter or knife, cut the dough like a pizza into 8 triangular wedges. Roll up each section starting at the wide end. Transfer the rugelach to a baking sheet, placing them 1 inch apart. Repeat with the other half of the dough and spinach filling.

Lightly brush the tops with the egg wash and sprinkle with sea salt.

Store leftovers in the fridge and reheat in a toaster oven.

Check out our review of “Molly on the Range” and other recipes from the book.