I begin this week’s Tuesday lead with two difficult confessions.

2) Left-over steamed white rice from last night’s take-out (any night’s Chinese take-out!) is impossible to resist the next day as a fried-rice base. OK…that’s not the second confession. That’s just a warm-up, and a tan-and-white fact, ma’am. The second confession is this—with all my love for quality Chinese-American food, with all my published recipes for roast pork egg foo young, chicken chow mein, even shrimp with lobster sauce, for chrisssake!—after countless tries over countless decades, I have never created a single wokful of fried rice that tastes anything like the fried rice at a Chinese restaurant, even a mediocre joint.

What, oh what, was I doing wrong? How had I angered the Rice Gods? 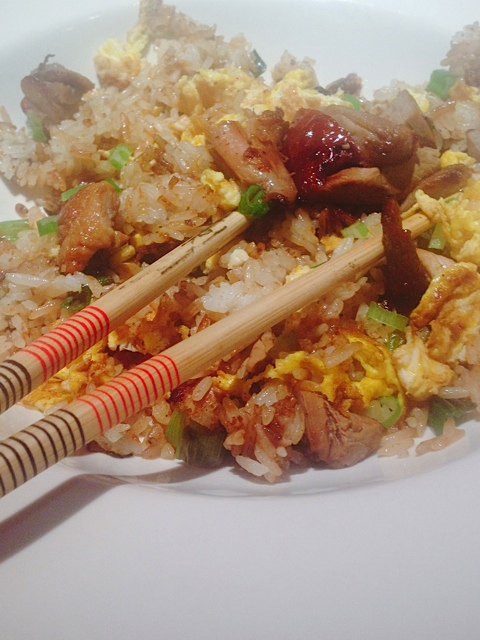 Then, last week—’twas a few nights after Christmas, in fact—I discovered several crucially important things, in a wave of Cantonese intuition. The “things” all boiled down (or fried up) to good, old-fashioned cooking logic. I’d tell you it was a gift from Santa, but I have no idea—ontologically or logistically—how that all works.

But the rice! Back to the rice. Oh, the rice. I am now on it like brown on rice.

The uppermost thing, ladies and gentlemens, is the oil thing.

With “My Three Sons” (and later “Seinfeld,” and later “How I Met Your Mother”)—blaring on the kitchen TV, Davie is approaching his wok with left-over Chinese-restaurant rice in carton. The name of the dish says “fried,” right? Never one to shy away from frying in any form (like “a little fried,” “medium-fried,” or “fried to goshdang hell”)I use to fry those grains in a considerable amount of oil (1/4 cup neutral oil in a big wok?) I was frying it, man!  I was making fried rice. But I was also screwing it up. For it turns out that the very subtle taste of fried rice gets compromised by the taste of the oil, no matter how little oil is in there. Much more important is what the Chinese call “the taste of the wok” (which is better still if you’ve got an old, marvelously seasoned one!)

So keep the oil away from your range. But…that doesn’t mean you should be shy about lubrication! My favorite fried rice in restaurants has always been Roast Pork Fried Rice, when little cubes of  masterfully marinated and roasted pork lend their porcine magic (and tasty fat) to this subtle ensemble.

The real magic of this Christmas awakening was that I not only had leftover white rice in the fridge…I also had leftover Cantonese Roast Duck! With lovely nubbins of duck fat clinging to the musky meat and skin. This was no accident at Christmastime. I’m a New York Jew! Of course I go to Chinatown for Christmas Dinner! The way I order…of course there’ll be leftovers.

The duck was the perfect way to grease up the wok a little bit. Over high heat, in it went as the first ingredient. I tossed it for about a minute, just enough so the duck would warm…and leave a residue of delicious duck fat.

Out of the pan with the duck…for it is now egg time! I used to make a kind of thin omelet in the pan, then, later, cut it into strips. Uh-uh. Too neat. This time I broke a jumbo egg right into the sizzling duck fat, and gave it a few stirs with my faithful chopsticks. I left it at two colors: yellow and white, none of this blended stuff you’d prepare for an elegant French omelet. Thirty seconds is really the max…so thirty seconds later out came the egg, which I dumped in a bowl on top of the warm roast duck. I broke up the congealed egg with a spoon, ending up with sloppy, grizzled little egg flaps. Bingo.

Next in the pan: the rice, alone, over high heat. This is the great step that adds “the taste of the wok.” With no oil in the wok, only a spot of duck fat, the rice threatens to stick—but not if you keep your chopsticks flailing, moving the rice around. Immediately after adding the rice, add one fat scallion, green and white, finely chopped. Keep it moving with the rice. Also, at this point, give the rice a little color with soy sauce. God, how I used to overdo this! Remember that most of the better Chinese restaurants serve fried rice that is not dark; the dish is usually a light-ish tan. Just for the visuals, you might want to sprinkle tiny drops all over the rice, in different areas, before mixing everything together; this should guarantee an even tan-ness after a good stir. If, instead, it has blotches…I don’t really care that much! But do pick out an excellent thin soy for this dish. On such a subtle stage, the soy sauce quality will grab the spotlight. But don’t let it over-act!

You’re almost there. Stir the duck and the egg back in. Vigorously. Get everything mixed through evenly. The ingredients have been in the wok for maybe three minutes, total, from start to finish. The rice is hot, which allow wisps of steam to rise above the platter on which you’re serving it. A few tiny flecks of raw scallion may be added as a garnish; again…do not overdo.

Dry, oilless wok, just a little animal fat, high heat…that’s the most important thing. And you can infer one other fact that I now think is also a dish-maker. Most Chinese restaurants offer a fried rice variation called “Yangzhou fried rice” (also known as “Young Chow fried rice,” or “House Special fried rice.”) This would be the kitchen sink variation; everything in the kitchen—pork, chicken, shrimp, etc.—typically gets thrown in. If your roast pork fried rice costs $5.50 for a pint, your Young Chow fried rice might cost $8.50. Now I’ve seen many a Young Chow fried rice in restaurants succeed deliciously. But I’d steer away from it at home. I’m convinced that picking one protein—my fave is now roast duck!—helps you a great deal in preserving the dish’s subtlety and individuality. I’ve learned to master a fried rice that tastes like fried rice…and the path to Young Chow perfection will take more time! And I don’t care which dynasty we’ll be in, or what American sitcom will be on the kitchen TV!