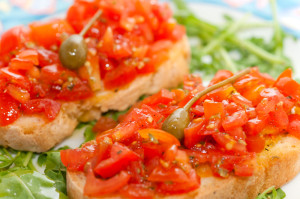 The paradise of great, simple Italian-American food in U.S. restaurants was lost when the restaurants became ristoranti, and when garlic bread became bruschetta (pronounced brew-SKET-ta.) All right, I’ve way overstated the case. The real problem with bruschetta is the attitude that sometimes comes with it; I have no problems whatsoever with the dish itself! In fact, I really do love the simplicity of the old peasant notion of grilling bread slices, rubbing them with garlic cloves, then dousing the grilled slices with good olive oil. In most American restaurants that serve bruschetta, a topping usually comes with the simply grilled bread (some logical, some baroque.) Most common is a topping of chopped tomatoes with basil and garlic. The following topping’s a little more complicated, but also basic and delicious. If you want real austerity, as I sometimes do…just follow the directions for the bread, garlic and oil, and leave the topping out.

2. In a food processor combine 3 cloves of the garlic, peeled, and the parsley. Process until they are fine. Add the roasted red peppers, capers and olives and pulse the mixture a few times until it is chunky. Season with salt and pepper to taste. Reserve at room temperature.

3. Cut the middle portion of the round loaf into 6 long slices, each one almost an inch thick. Cut these slices in half, making 12 half-slices that are roughly 4x3x1 inches.

4. When fire is ready, place the 12 slices over it in a single layer. Cook, turning once, until the outsides of the bread are golden brown (with grill marks, if possible). This should take about 2 minutes per side; check frequently to make sure the bread isn’t burning.

5. When the bread slices are done, rub each one along the edges with smashed garlic cloves. You can rub lightly or heavily, depending on your garlic preference—but you will need about 6 smashed cloves to reach all spots. Place the slices on a large platter in a single layer. Sprinkle each slice with 2 teaspoons of olive oil, breaking the surface of the bread lightly with a spoon to let the oil soak in. Season with coarse salt. Turn the slices over, and repeat the oil-and-salt procedure. Top with the parsley-red pepper mixture and serve (top each slice with two anchovy filets if desired).