Prepare for Summer: A Burger Report To Get You Fired Up 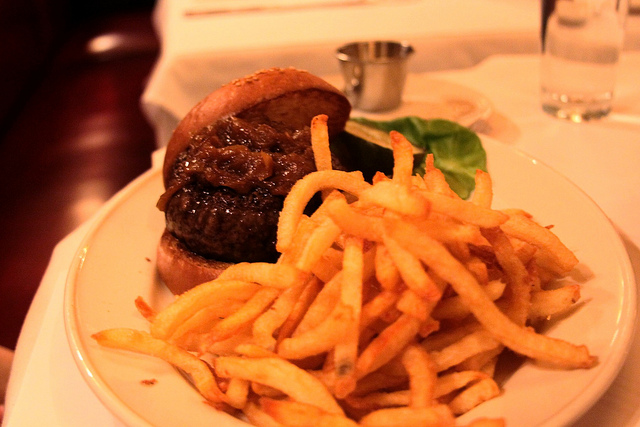 I live for burgers. And I live in NYC.

My favorite burger in NYC restaurants, without doubt, is the Black Label Burger, at Minetta Tavern. Crafted from the butcherings of meat star Pat LaFrieda, the BLB—which includes chuck, strip steak, brisket and a little rib-eye—is based on meat that has been aged FORTY-FIVE days, an insane amount of dry-aging. You get from it that wonderful, minerally taste that the finest dry-aged steak yields. Until Pat & Minetta came along, no one wasted this much time in the dry-aging box for meat destined merely to be chopped and put on a bun! I daresay…I’d guess NO burgers were being aged at all, anywhere!

This week brings news of masterpiece burger #2 from the same team. Keith McNally is the mega-restaurateur behind Minetta Tavern (also Balthazar, Pastis, etc.)…and he has just opened Cherche Midi, on the Bowery. The word is…a new version of the Minetta burger (this one called The Prime Rib Burger) is on the menu! The meat blend is a little different—prime rib and fresh short rib. There is aging involved, but not as much as for the Black Label Burger. The Prime Rib Burger, unlike the BLB, has stuff on it—cheese, onions, tomatoes, pickle, bacon marmalade. One comfort will be the price: the BLB at Minetta goes for $28, whereas the Prime Rib Burger is “only” $21. You can be sure I’ll be there soon to try it!

In the mean time, and for those of you outside the NY area (as well of those of you who’d much rather make a great burger at home!), I have news of the finest burger blend you’ll ever buy. It is the August offering of my just-launched Wagyu-Of-The-Month Club, a collaboration with George Faison, another super-starry butcher; the meat is curated by George’s house, DeBragga & Spitler, one of the finest butchers to the NY restaurant trade for over a hundred years.

I’m telling you in plenty of time, so you can plan for August! (There’s also an insane strip steak coming up in July.)

If you join the club, in August you will receive, in addition to the burgers, my notes on serving burgers, as well five recipes from simple to baroque.

Just to tease you a bit, I’m posting below some of the supporting material, and two of the five burger recipes. They are, respectively, my parents’ favorite burgers…and as I write this, on Sunday, June 15…it’s Father’s Day! Thank you Mom & Dad for so many wonderful things!

THE BASIC BURGER, AND BEYOND…

Where I grew up (in New York City)…and when I grew up (in the late 50s/early 60s)…there were no “special sauces” on burgers! No admonitions to “have it your way!” Everyone in my culture had it the same way: salt, pepper, a thin slice of raw onion, and a little ketchup. It emphasized the glory of the burger itself. Today—especially if you’re a member of this club—that strategy makes even more sense; the Wagyu burgers you’ve just received are among the finest burgers you’ll ever taste. They are velvety, buttery, beefy…just divine as they are! Why muck ’em up? When my Dad, a great purist, started to see the New Burger Thinking coming our way from California in the 1960s, he would often snicker: “that’s not a burger…that’s a salad!” 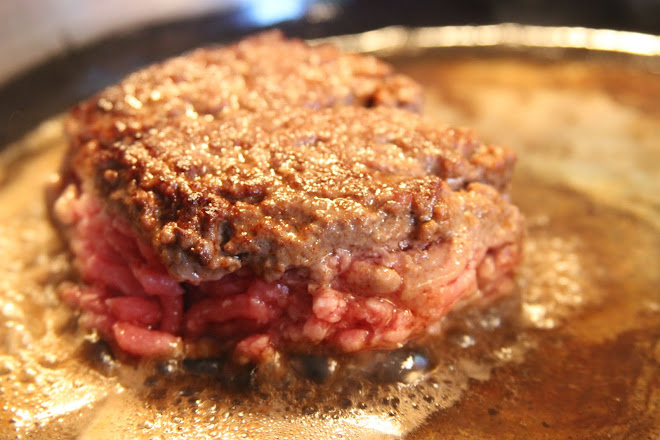 But that was many moons ago. 2014 Dave is open to a variation, or five, on the basic burger…if the variation respects the burger. Heck…even my dad was open. Well, slightly open.

As you know, my dad was an onion-ketchup guy all the way. But sometimes, he would take me, late at night, to a joint near Rockaway’s Playland, called Bogie’s (pronounced BO-gees and short, I think, for Boggiano’s) that had great hot dogs and hamburgers off the griddle. Their “variation” on my Dad’s classic burger—a tiny variation—was just about the only variation he craved. To me, it is a brilliantly clean and simple way to underline the beef.

Cook an 8-ounce Wagyu burger on griddle, or in sauté pan, preferably in a little butter or beef fat. When the burger’s done (I like ’em crusty outside, rare inside), season well, and serve on a buttered bun with a very thin tomato slice, a very thin onion slice, and ketchup. 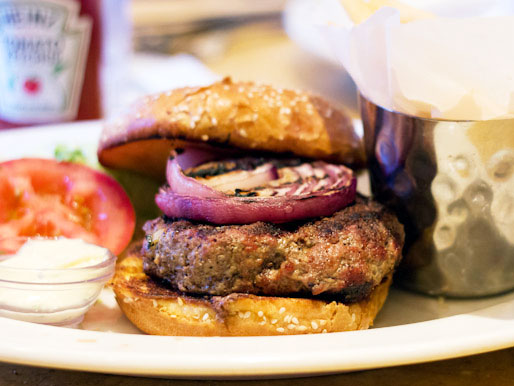 ONIONS, THROUGH THICK AND THIN
My Dad’s overwhelming choice in hamburger onion slices was for thin ones. I think he liked the way that thin onion slices melded with the warm meat, the way they became one with the burger. I appreciate that commingling a great deal myself.

That being said…I know that my Dad just missed the advent of the Vidalia-everywhere era (not to mention the Walla Walla, the Texas Sweet, etc.)…and I strongly suspect that he would have loved a thicker slice of a sweet onion on his burger, too. It’s a different aesthetic, to be sure–kind of a contrasting, salad-y crunch, rather than a self-sacrificing glom. But there’s virtue in both, to be sure.

THE GRIDDLE RIDDLE…AND THE IMPORTANCE OF BEEF FAT 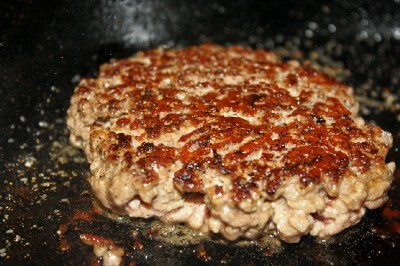 As you’ve noted, the Bogie’s burger was always cooked on Bogie’s great griddle, which is a lot like the frying pan you’ve got at home. These were pre-grill days…I don’t think they even had a grill at Bogie’s. That comes as a shock to many modern burgermeisters, of course—because the grilled burger has somehow become synonymous with the great burger.

OK. I sure like me mah grilled burger. But…in my hamburgerous world-view…the griddle (or the sauté pan) doesn’t get enough credit!

Have you ever had a burger at a burger joint with a broad griddle, the kind of place that has been flipping burgers on that griddle for 20 or 30 years…like Jackson Hole, in New York City? The flavor of the burger is transformed by a griddle like that—because decades of use have actually changed the flavor of that steel, driven a record of beefy fat into it! And that taste of old fat subtly affects the taste of any new burger coming off the griddle. It adds depth, dimension, interest, complexity. It is absolutely NOT a taste that you can achieve on a grill over an open fire!

You can echo that griddle fat taste at home by establishing a background beef flavor in your sauté pan. And nothing will help more in establishing the flavor of your pan than melting some beef fat in it, and letting it sit for a few hours before wiping it out. That’s a good general principle as you break in the pan. After that…I like to melt a little beef fat in the pan before any cooking of hamburgers! And the best beef fat of all…is aged beef fat! You can age your own: every time you have a steak, or a roast, just cut off a little bit of the extra fat. Wrapped tight, it will keep for a week or so in the fridge, definitely creating a deeper taste that substitutes for 30 years of griddle cooking. When it’s on the edge of funk…wrap it even tighter and put it in the freezer! Now you’ll have an ever-ready shortening and lubrication for your burger pan.

No doubt about it it: this recipe right here yielded my favorite lunch on days I came home from school! I’ve never seen anyone else make a cheeseburger like this before or since, and I have no idea where it came from. But my mom had an amazing thing going. She’d cook fat burgers in a pan with butter, melt cheese on ’em, pop ’em on slices of white toast, open-faced…and insist on no condiments whatsoever! To me, it was always the ultimate cheeseburger—because some kind of elemental exchange of meat and dairy took place, the soul of the cheeseburger experience, something that felt almost illicit (was I just a Jewish kid rebelling against the kosher laws in the most direct way possible?). Today, the recipe is just as good as ever…except that even the best Kraft cheese in the supermarket is not as rich and flavorful as it once was. So, to re-create the old experience, I sprinkled some Parmigiano-Reggiano on the cheeseburger as the cheese was melting. Deep cheese met deep beef…and order was restored! 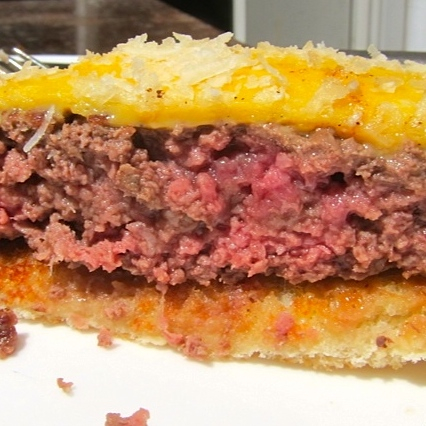 1. Shape four 8-ounce Wagyu beef patties. Cook on griddle or in pan with beef fat or butter. Just before the burgers are done, lay a slice of American cheese over each one, and sprinkle each with 1/2 teaspoon grated Parmigiano-Reggiano. Cover the pan. When the cheese is just melted, serve each burger on a slice of medium-toasted white bread. Sprinkle with salt. No condiments. Knife and fork recommended.

BY THE WAY: The hockey season has finally ground to a halt. So many of us bled gallons of Ranger blue during the exhilarating 25-game playoffs. On Friday night, our Stanley Cup dream for the New York Rangers was crushed by the Los Angeles Kings. Why am I telling you this? Because the Rangers’ greatest player, goalie Henrik Lundqvist—who performed supernaturally in the playoffs, like nothing I’ve ever seen—revealed his favorite dish recently. Cheeseburgers! Hope my mom’s recipe above finds its way to him! LET’S GO RANGERS 2015!