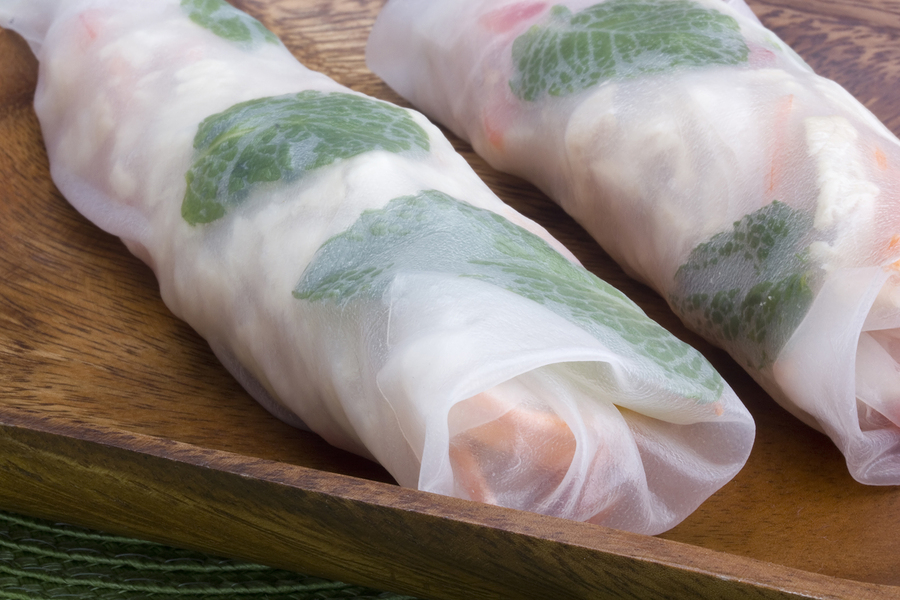 One of the classic Vietnamese dishes that gets some attention and play in the U.S. is summer rolls—a wonderful appetizer, kind of a salad rolled up in a rice paper wrapper called banh trang. The cool thing is that—unlike Vietnamese and Chinese spring rolls—the summer roll does not get fried. It’s a cold dish, light and clean, that Americans especially prize for its nutritional correctness.

1. In a large mixing bowl, blend together the fish sauce, sugar and mint. Add the crabmeat and blend well. Reserve.

2. Prepare a large basin of warm water. Place a large, clean towel next to it. Pick up one sheet of banh trang, and dip it in the water for 3 seconds. Try to dip the whole sheet at the same time. Remove from water, and place sheet on the towel.

7. When done, cut each sheet in 3 diagonal pieces, arrange 3 pieces on each of 8 plates, and serve with dipping sauce.

NOTE: I love summer rolls with a light dipping sauce. Ponzu Sauce is fantastic with them, and the Potsticker Dipping Sauce is also good. A typically Vietnamese dipping-sauce thing to do would be to mix together a few tablespoons of fish sauce, a few tablespoons of water, a tablespoon of lime juice, and 2 teaspoons of sugar. A little minced garlic and a little hot chili are optional.

Ponzu Sauce
Every once in a while a somewhat obscure element of a foreign cuisine gets pistol-hot in the U.S., takes on cachet, even breaks out of its ethnic confines. Such an element in the current American environment is Ponzu Sauce—a mixture of Japanese citrus juices, soy sauce and other flavors, used in Japan as a dipping sauce (most famously for simmered dishes like nabemono.) American sushi bars sometimes offer it as a dipping sauce—but multi-culti fusion chefs across the land have swiped it from the sushi bar, and give it more a prominent position in their creations. In Japan, ponzu is made from a variety of sour citrus fruits, the most well-known one being yuzu. Yuzu is quite rare in the U.S., though good Japanese groceries carry yuzu juice. My favorite Japanese cookbook (Japanese Cooking: A Simple Art, by Shizuo Tsuji) gives a good lemon juice/lime juice substitute for yuzu. I think the substitute tastes even more like the real juice if you throw in some lime zest. I’ve adapted Tsuji’s ponzu recipe in a few other ways, as well. Yuzu juice is quite salty, so I’ve added a little salt. And…Tsuji recommends storing the ponzu for 3 months to develop flavor. But I find that adding more bonito flakes today means you can enjoy the sauce tomorrow. Enjoy it with anything Asian that could use a lively dip, particularly seafood and vegetables: steamed fish, grilled lobster, sautéed Chinese vegetables, etc. Great with raw foods too…like sashimi, carrot slices, tofu.

1. Combine lemon juice, lime juice, lime zest, 2 teaspoons rice vinegar and salt in a medium-sized bowl. Stir to combine ingredients; let sit for 30 minutes so that the citrus mixture can absorb the flavor of the lime zest.

2. In a small bowl, combine the remaining rice vinegar with the soy sauce.

3. Pour mirin into a small saucepan. Bring to a boil over high heat and let boil until the liquid has reduced by 1/2, about 2 minutes. Pour hot liquid into a small bowl and let cool.

4. Strain the citrus mixture through a fine mesh strainer, removing the lime zest and any seeds. Add the strained citrus mixture to the vinegar/soy mixture. Whisk until well-blended. Add the mirin, bonito flakes and kombu, whisking until combined. Cover sauce with plastic wrap and let sit 24 hours before serving. Strain before serving.

These recipes are from my book It’s ALL American Food.