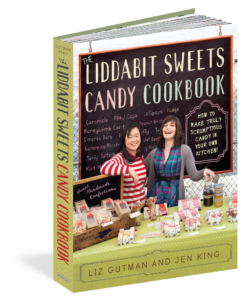 The Brooklyn Flea and its food arm, Smorgasburg, have a number of artisanal food success stories, one of which being Liddabit Sweets. Started by Liz Gutman and Jen King in early 2009, Liddabit quickly rose in renown as “the” makers of delicious candies, the claims to fame being their beer-infused and pretzel-studded caramels, and handmade takes on popular candy bars. Liz and Jen met during their time in the International Culinary Center (formerly the French Culinary Institute) Pastry Arts program, sharing snack and bouncing candy ideas off each other between lessons. Those early tables at the Brooklyn Flea mixed high-end pastry skills with nostalgia. Elated customers were won over with that famous beer & pretzel caramel, made from Brooklyn Brewery & Martin’s Pretzels; the simply divine sea salt caramels; throwback chocolate-covered honeycomb candy; or possibly The Snack’r aka what the prototype of Snickers probably tasted like before the constraints of mass production cheapened the final product.

Now seven years later, Liddabit Sweets calls Sunset Park’s Industry City home and the candy line has gone through changes. The economics of handmade candy bars didn’t work out so well in the end and they’ve been replaced with Lidda-bites, bonbons done in very American flavors. The caramels, though, have expanded to include fig-ricotta and a caramel-topped chocolate chip cookie. Honeycomb, caramel popcorn, pate de fruits, and fun seasonal items round out their candy selection. As if this all wasn’t enough, in 2012, Liz and Jen published Liddabit Sweets Candy Cookbook (Workman), which became a 2013 IACP Cookbook Award finalist. Since we’re about to hit peak candy season, we have two classic fall recipes for you: Buckeyes and Honey Caramel Corn.