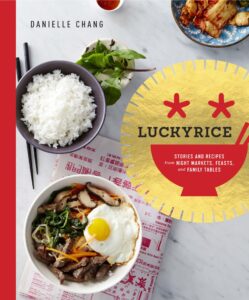 It’s hard to believe now, but back in 2009, Asian street food was still a large unknown to Western audiences. Large-scale food events at affordable price points (we’re not talking galas and James Beard dinners) were still in their infancy as the age of the blogger and Instagram celebrity started. LuckyRice was one of those first big food events in New York City. Founded by Danielle Chang, a former CEO of the fashion house Vivienne Tam, LuckyRice celebrates “Asian culture through the lens of food and drink.” After the first festival in 2009, Chang has brought the all-day eating fest to San Francisco, Los Angeles, Miami, Houston, Chicago and Toronto. This year, she added on the PBS show “Lucky Chow” and a glorious cookbook: Lucky Rice: Stories and Recipes from Night Markets, Feasts, and Family Tables (Clarkson Potter). The cookbook is divided into sections based on a theme: Street Eats, Funky Food, Snacks and Grub, Soups and Broths, Spicy Dishes, Asian Mash-Ups, Rice Bowls and Beyond, Lucky Feasts, Cocktails, and Sweets.

Now that Asian street food and delicacies alike have been demystified for most Americans, more and more will be turning to cookbooks to replicate their favorites. Lucky Rice does an incredible job of utilizing common foodstuffs like garlic, onions, scallions, mussels, and steak via new takes on classics, and setting it apart from Asian cookbooks who rely heavily on ingredients not usually found in Western kitchens. This is welcoming to amateur cooks who want to expand their repertoire with something like Jewish Pastrami Egg Rolls or Spicy Pork Noodles, or simply whip up a new meal the kids might be willing to eat, like Japanese Fried Chicken or Chinese-Muslim Lamb Burgers. Luckily for Americans in 2016, most supermarkets now carry international groceries so any unfamiliar ingredients can be easily found (except perhaps the fresh lemongrass which proved hard to find even in New York City).

The resulting dishes are pretty spot-on; they don’t come out wildly different than the pictures or feel like they’re taking significantly longer to make than stated. Plus, none of the recipes I tested were too intensive or time-consuming to completely turn me off the cookbook—I’m of the mind that dishes I make at home should make me want to eat at home, not just wish I’d gone out to the newest hot spot. In fact, they were so easy and delectable, I’ve found myself constantly returning to Lucky Rice to try out new dishes, and at least one may be making regular appearances at my kitchen table (Curry in a Hurry, page 109).  In a celebration of fall and football, we’ve got their Sichuanese Chicken Wings and an Afternoon Gin Tea recipes for you to try out. 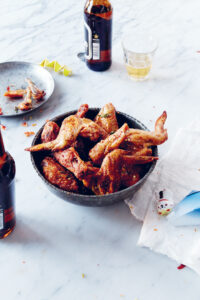 This take on an American finger food favorite gets its spice from Sichuanese pepper and is stir-fried with aggressive amounts of chiles, which—despite their fiery red appearance—add more flavor than heat.

These wings are baked, not fried, but still have a wonderful crunch.

Gin time and tea time are both entrenched British traditions, and the pair makes quite a heady cocktail. The British colonized much of Asia, and in the process, they brought over their traditions, including a proper English tea. This cocktail picks up both citrus and smoky notes from Lapsang Souchong, a black tea that originates from the Chinese province of Fujian and is made of Lapsang leaves that have been smoked over a pinewood fire. Gin, of course, has a lurid history as the bathtub spirit of choice during Prohibition, when the homemade brew was clandestinely served in teapots as part of the afternoon ritual. For parties, I like to mull a big batch of this “tea” with Asian-forward herbs like star anise, black peppercorns, and Kaffir lime leaves. As a wink to tradition, I pour the cocktail from a teapot into teacups.